That was the main message Switzerland Tourism shared with nearly 40 travel industry partners and media, who were invited to celebrate the launch of Switzerland’s summer/fall campaigns.

“The interesting part about Switzerland is that our tourism industry never really shut down [during the pandemic],” Zemp told PAX at the outdoor event – one of the first major in-person travel events to take place in months.

“Even in winter, our ski resorts were open and so were hotels, which operated at a much lower level with regulations.” 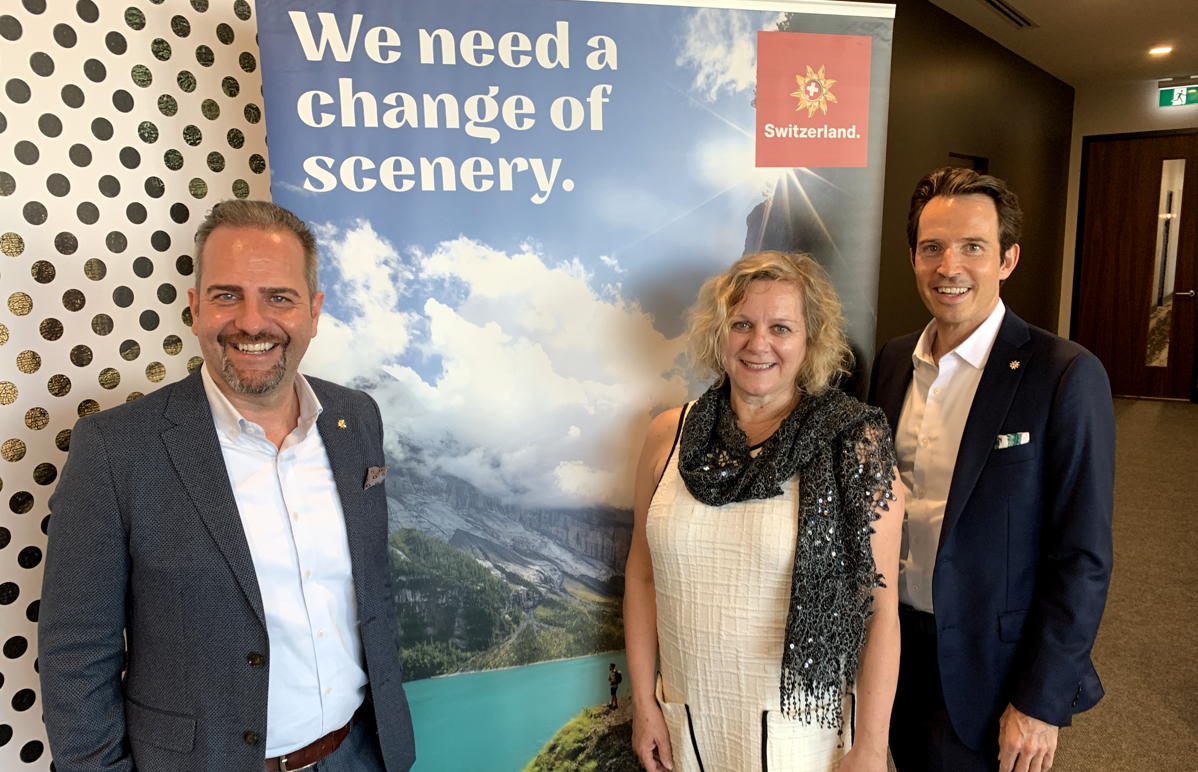 The lively evening unfolded as Switzerland Tourism, in partnership with Air Canada, eagerly prepares to host 40 Canadian travel advisors, and a selection of trade media, on an immersive trip through Switzerland later this month.

From Aug. 28 to Sept. 2, the Canadian delegation (PAX included) will compete, on location, in an “Air Canada Race,” attend an awards dinner, participate in workshops and explore local offerings through Basel, Schönried, Gstaad, Lauenen and other Swiss municipalities.

Participants will also get a chance to experience two brand new hotels: the Mövenpick Hotel Basel and a new Kempinski hotel in Engelberg.

“We’re ready and we’re hoping people can see that Switzerland is a natural choice for a post-COVID holiday,’ Zemp said.

Last night’s gathering also doubled as a farewell party for Ursula Beamish-Mader, Switzerland Tourism’s long-time manager of media relations for North America, who will be retiring this September.

Canada’s interest in Switzerland was on the rise before the COVID-19 pandemic hit – in 2019 “we had the best year ever” as arrivals increased by nearly three per cent, Zemp said.

In June 2021, the Swiss government officially opened its border to fully vaccinated travellers from Canada.

Canadians who can prove that they are fully vaccinated have been able to travel to Switzerland, without quarantine or PCR tests, since June 26.

While the road to recovery is still a long one for destinations, Switzerland’s approach to managing the pandemic, and its path towards normalization, is making headlines. 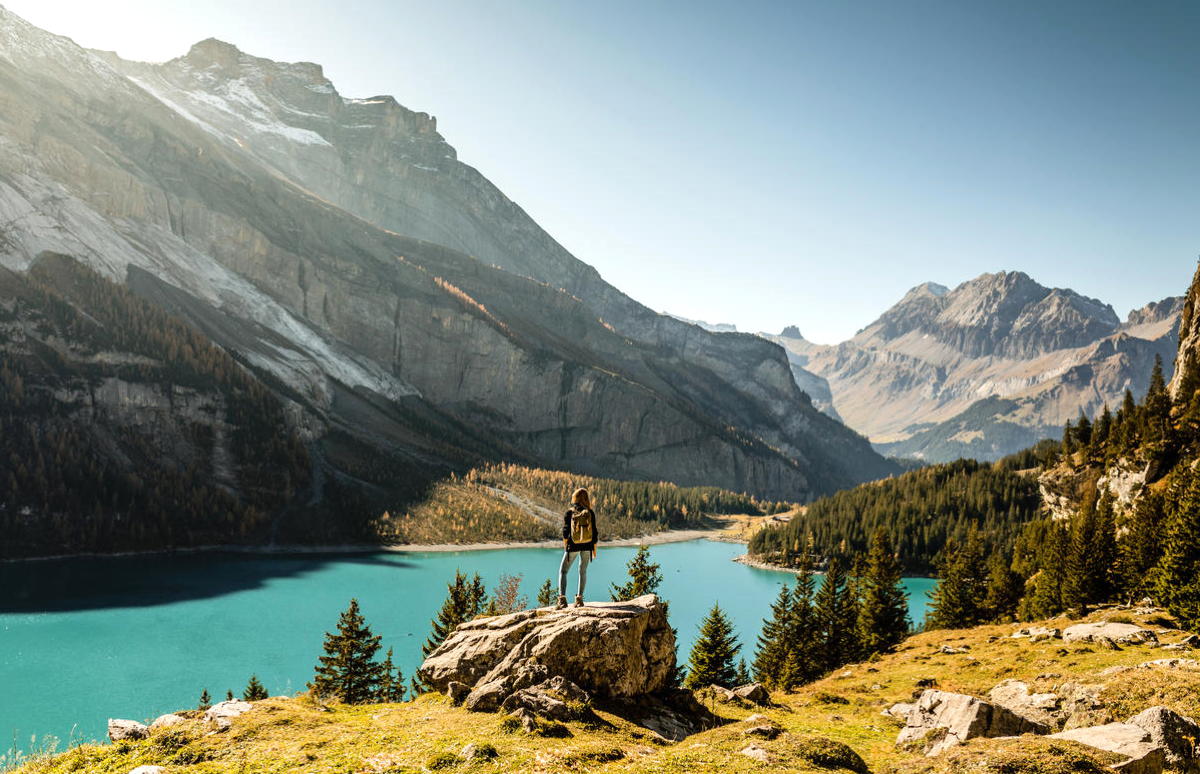 In Bloomberg’s most recent “Covid Resilience Ranking” – a monthly snapshot of where COVID-19 is being handled the most effectively with the least social and economic disruption – Switzerland, for embracing travel amid falling fatalities, ranked number 2 in July (Norway got the top spot).

Local COVID containment, quality of healthcare, vaccination coverage and overall mortality are just some of the indicators Bloomberg uses to rank countries.

This bodes well for tourism in Switzerland, where Alpine passes, turquoise lakes and charming boutique towns offer visitors plenty of opportunities to embrace nature, culture and other activities away from mass crowds.

And Switzerland, despite the pandemic, has still managed to unveil a number of new attractions and upgrades over the past year.

The Jungfrau Region, for example, recently upgraded its V-Cableway ride in the Bernese Oberland, which transports travellers to “Jungfraujoch – Top of Europe” – a sky-high experience set against an epic background of ice, snow and rock in the Swiss Alps. 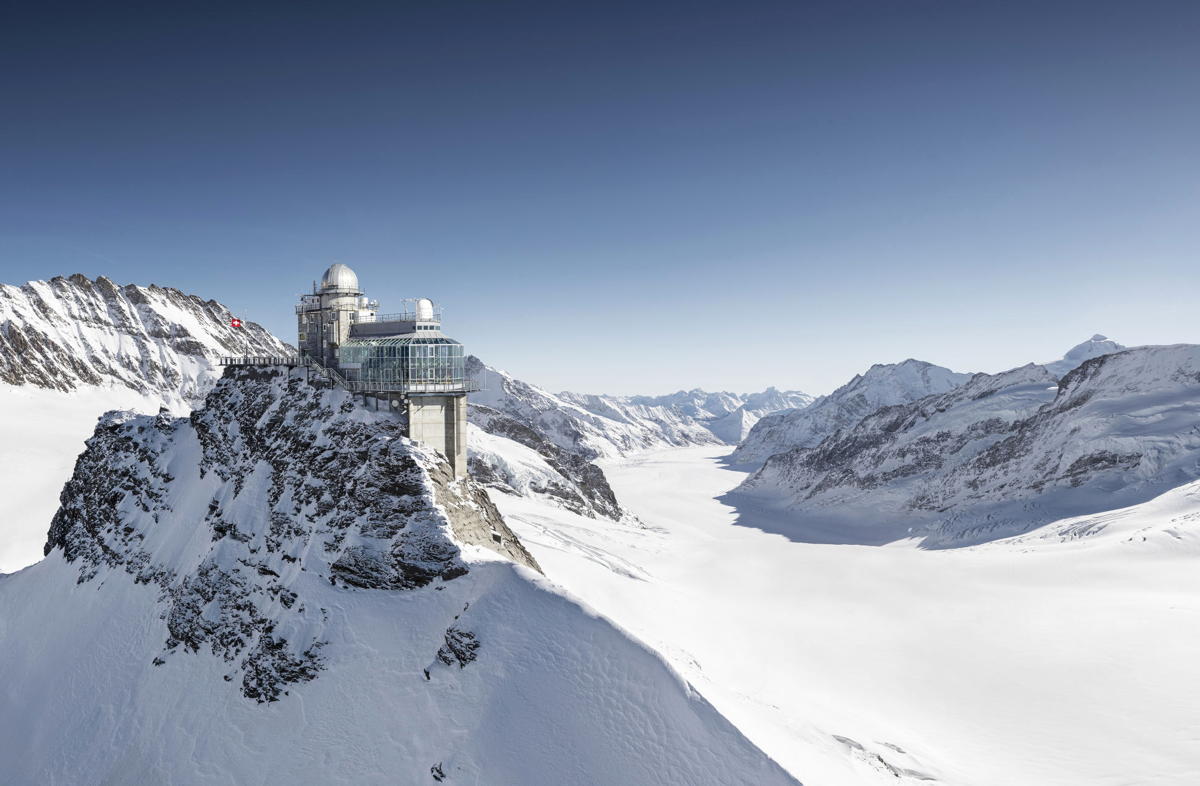 The upgraded V-Cableway is part of a newly-built terminal in Grindelwald that will open on Dec. 5, and it will reduce travel times to the Jungfraujoch and ski areas by 47 minutes.

Switzerland is also celebrating the completion of the Ceneri Base Tunnel, a new trans-European rail route that can transport travellers from Zurich to Milan in three hours (30 minutes faster than before).

Instead of trying to “cram in as much as possible” when visiting Europe – a common pre-pandemic practice – travellers, today, may be more inclined to concentrate on one particular country or region, he said.

Switzerland, being home to four official languages – German, French, Italian, and Romansh – is effectively positioned for this trend, as there’s a variety of things to experience, from glacier-encrusted Swiss Alps to world-class ski resorts to 65,000 kilometers of marked hiking trails.

And don’t forget a compressive train system that reaches around mountains and soars through winding valleys, connecting travellers to towns where some of the world’s best chocolate and cheese can be found.

A trip to Switzerland, really, is like visiting four different countries in one convenient place. 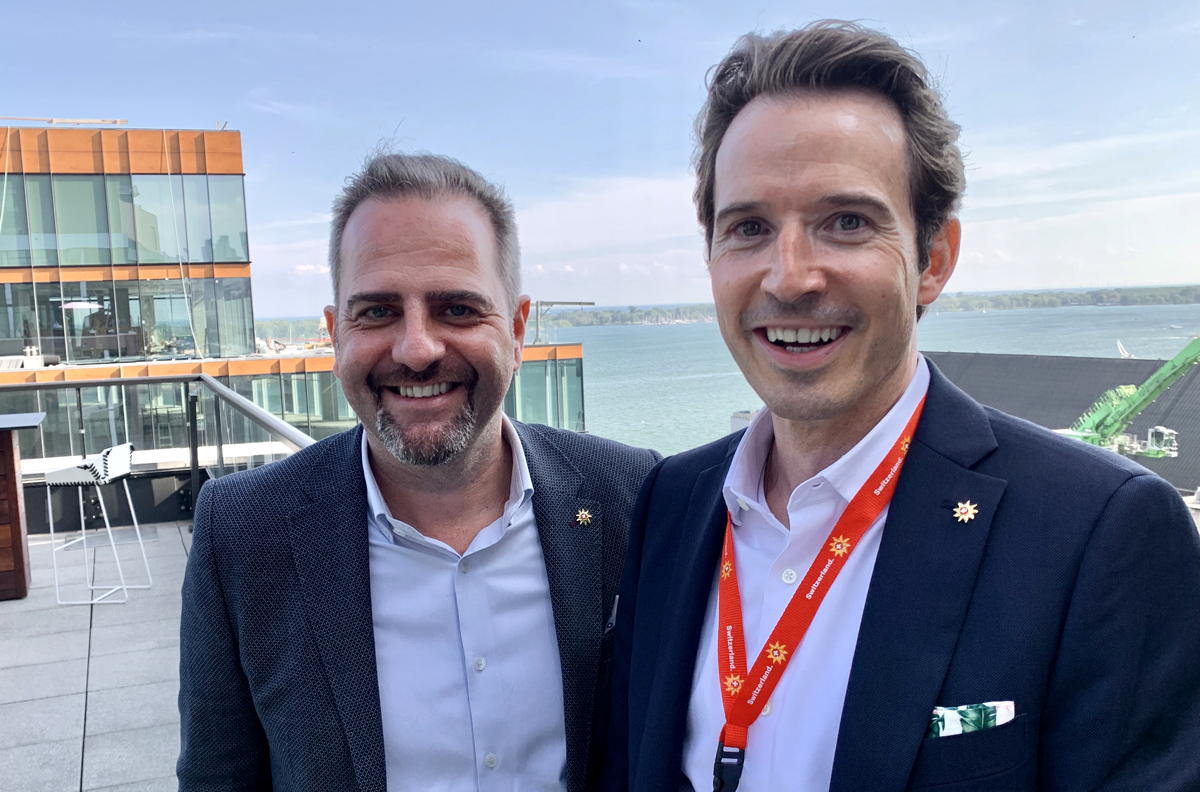 The best way to see Switzerland is via the Swiss Travel Pass, an all-in-one ticket that allows travellers to see the entire country by rail, road and waterway.

The pass includes value-added perks, too, such as public transportation within cities and access to hundreds of museums and several castles.

“Switzerland is open as long as you’re fully vaccinated,” Zemp said, noting how the only venues that may require a visitor to show proof of vaccination are the nightclubs.

Switzerland is part of the Schengen Area, a region comprising of 26 European countries, which means the EU Digital COVID Certificate is used for carrying health credentials.

This pass, currently, is open to Europeans – how it will be extended to visitors from countries overseas has “yet to be seen,” Zemp said (although conversations between governments are currently taking place).

The proof of vaccination credential that the Canadian government has promised to unveil this fall may bring Canada up to speed with Europe’s system. 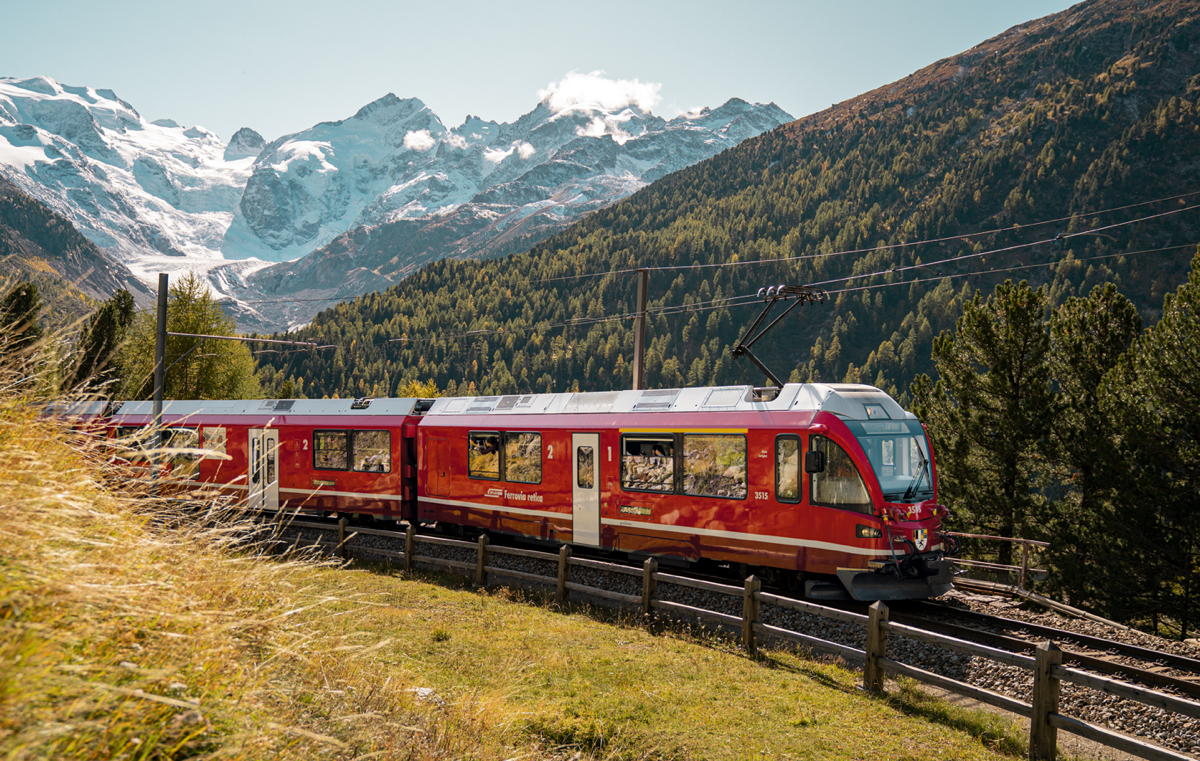 But one thing is for certain: safety and peace of mind are expected to drive post-pandemic travel.

And, according to the latest research, these are two qualities that Switzerland already embodies.

In a recent study by the Deep Knowledge Group, a research consortium, Switzerland (and Canada, too) rank amongst the safest countries in today’s COVID-19 world.

A toast to Ursula

As mentioned, Ursula Beamish-Mader will be retiring next month (but she will be joining the trade Switzerland trip happening later this month).

Beamish-Mader joined Switzerland Tourism in 1985 after immigrating to Canada from Switzerland, where she previously worked as a book seller/librarian and in restaurants (her family ran them). 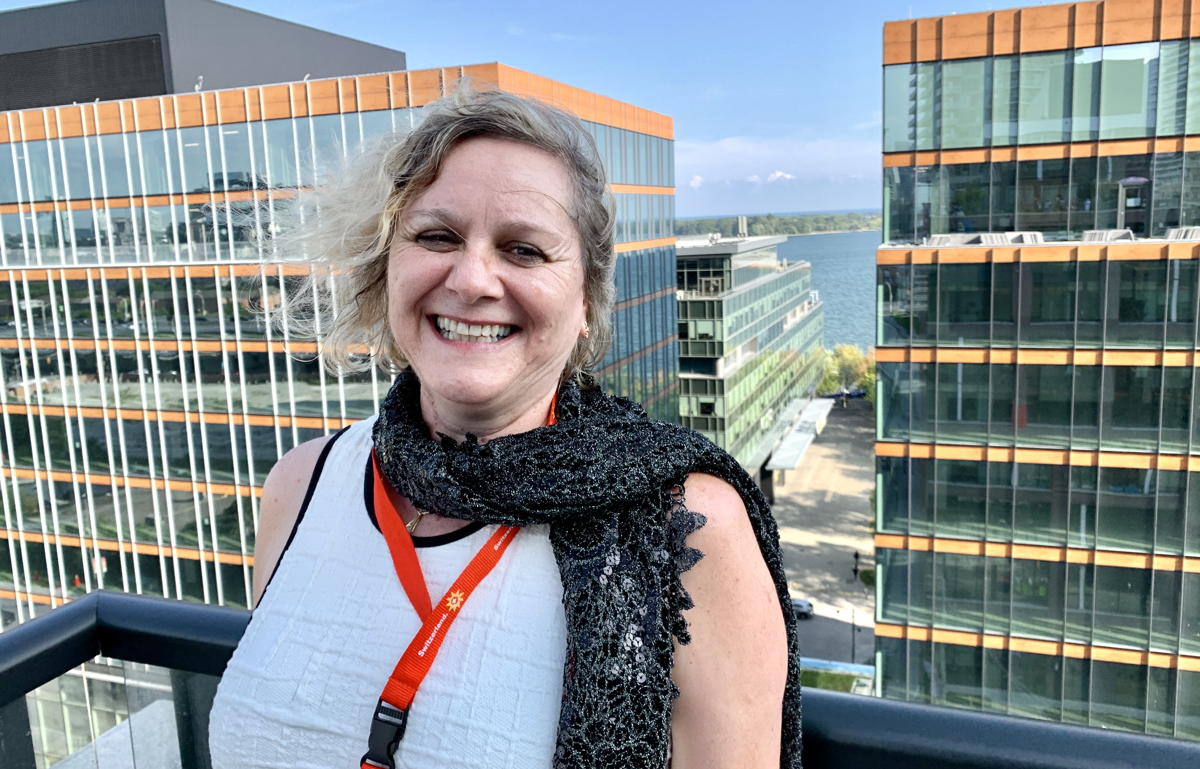 As one who enjoys consuming media at all hours of the day, Beamish-Mader said the job she's done for all of these years – though demanding at times – “doesn’t feel like work" and "I really like the people."

When she officially retires, she hopes to travel more with her husband, learn how to play bridge and devote more time to curling, which she both competes in and coaches.

But travel and tourism will always have a special place in her heart.

“I am very lucky to be in this profession,” she said.