Hawaii's Mauna Loa, the world's largest active volcano, erupted for the first time in almost 40 years on Sunday night (Nov. 27), prompting an upgraded alert level to a “warning” – the highest classification there is.

Reports say the lava flow, as of now, is contained within the summit. But nearby residents have been placed on alert and were earlier warned about the risk of falling ash.

Mauna Loa, which is located inside Hawaii Volcanoes National Park, is one of five volcanoes that make up the Big Island of Hawaii on southernmost island in the Hawaiian archipelago.

A recent spike in earthquakes at the summit had scientists on alert leading up to Sunday’s eruption.

So far, no evacuation orders have been issued and residential areas are unlikely to be impacted at this stage, emergency officials said Monday (Nov. 28).

But yesterday, the U.S. Geological Service (USGS) said the situation could change quickly. 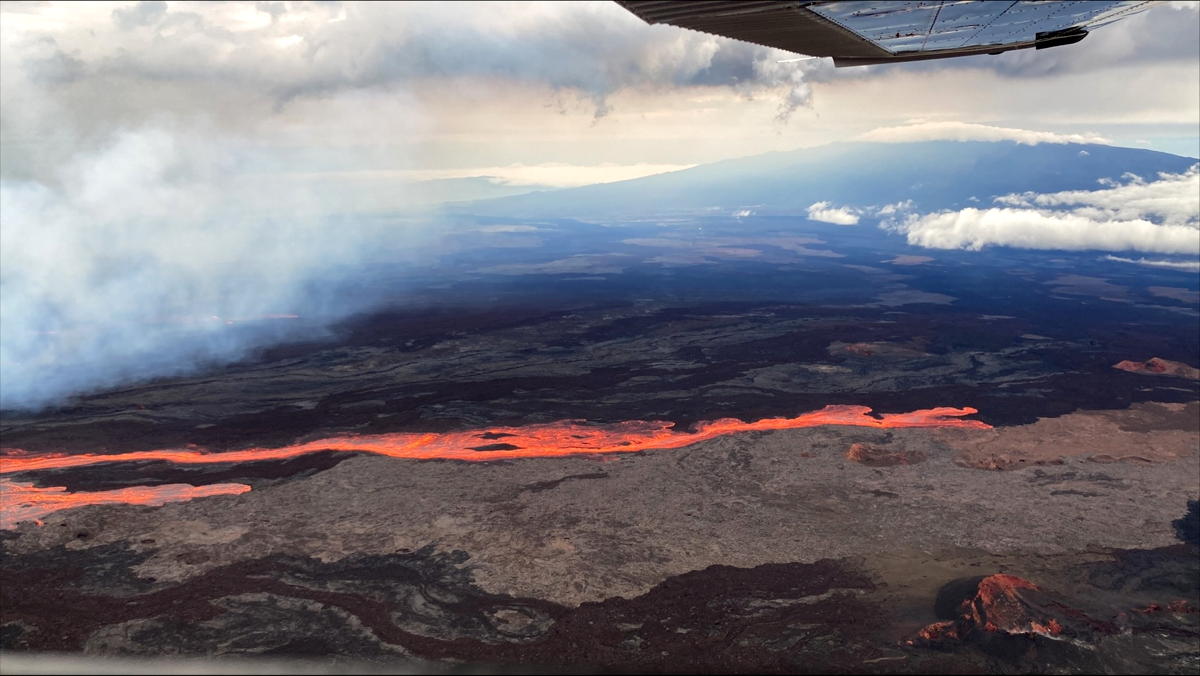 The eruption of Mauna Loa actually joins a neighbouring volcano roughly 33 kilometres away, Kilauea, which has been erupting for more than a year now.

The rare dual-eruption event is expected to draw an influx of visitors eager to see molten flows, the national park wrote in a Facebook post.

Miel Corbett, a USGS spokesperson, told The Associated Press that it’s impossible to predict how long Mauna Loa will erupt and did not rule out a potential threat to areas on the Big Island.

But the USGS is advising locals to review their plans should lava pose a threat. The Hawaii Emergency Management Agency is also advising residents to stay inside, as ash is expected to fall.

Scientist Ken Hon of the Hawaiian Volcanos Observatory told AP that Mauna Loa’s eruptions tend to be at their largest volume within the first few days of an eruption and then tend to taper off.

In an update shared Monday, the Hawaii Tourism Canada Office reiterated that there is no lava flow down the slopes of Mauna Loa and no danger to communities on Hawaii Island.

Should you cancel or postpone your client’s trip to Hawaii? Hawaii Tourism shared the following Q&A to address some Mauna Loa-related concerns.

Q: Should travel plans to the Hawaiian Islands be postponed or cancelled?

A: There is no need to change travel plans to any of the Hawaiian Islands at this time. Mauna Loa is located on Hawaii Island, the southernmost island of the main island chain. Travel to the other islands – Kaua‘i, O‘ahu, Maui, Moloka‘i and Lāna‘i – is unaffected by the eruption.

Q: Should travel plans to Hawaii Island be re-routed to the other islands?

A: There is no need to change travel plans to Hawaii Island at this time. The eruption of lava is currently contained within the summit caldera at the top of Mauna Loa. While the eruption has caused Mauna Loa’s Aviation Colour Code to be elevated to red – which means a hazardous eruption is imminent, underway or suspected – Hawaii Island’s two major airports in Hilo and Kona are currently open and the eruption is not expected to affect their ability to handle the regularly scheduled flights that arrive and depart each day. It’s a good idea to check with your airline for the status of your flight.

Q: Is this eruption a danger to people on Hawaii Island?

A: While all lava being emitted is currently contained within the summit caldera at the top of Mauna Loa, volcanic eruptions are dynamic and conditions can change quickly. Residents and visitors staying in communities downslope of Mauna Loa should have emergency preparedness plans ready in the event an evacuation becomes necessary. Visitors staying in short-term vacation rentals should contact their hosts for more information. The major resort areas of Kailua-Kona, the Kohala Coast, and Hilo are not immediately downslope of the eruption.

Q: Is there a danger to people with breathing problems from the ash emitted by the eruption?

A: People who suffer from asthma, emphysema, COPD, or other types of breathing problems should take precautions to avoid the ash and vog [volcanic smog] that are characteristic of volcanic eruptions. This would include either staying indoors or monitoring how the wind is blowing so as not to be caught in an area where ash and vog are heavy and could impair the ability to breathe normally.

Q: Is this eruption of Mauna Loa unusual?

A: While Hawaii Island is the youngest and most active of the Hawaiian Islands in terms of volcanic activity, eruptions are rare. The last time Mauna Loa erupted was 38 years ago in 1984. The island’s most recent eruption took place in 2018 when Kīlauea Volcano erupted and lava flowed for several months.

Q: Where can people find the latest information and updates on the eruption?

A: Official channels are the best sources for the latest updates about the Mauna Loa eruption, including the following: