During the pandemic, vacation home rentals hit their stride as more people switched to remote work and began to prefer more personal space – a luxury that’s not always available at hotels – when travelling for leisure purposes.

It’s a trend Kissimmee, Florida – known as the “Vacation Home Capital of the World” – quickly tapped into, and according to the destination’s tourism board, those who tried renting a vacation home during COVID (as an alternative to staying in a hotel) are coming back for more.

“We had a lot of first-time vacation home renters in the market and they’ve kind of converted now,” DT Minich, president and CEO of Experience Kissimmee, told PAX in Toronto on Tuesday night (July 19) at a rooftop reception for industry partners and media at 130 Queens Quay East, where VoX International (which represents Kissimmee in Canada) has offices.

And in Kissimmee, a family-friendly destination located in Florida's Osceola County, just south of Orlando, there’s a lot of high-end inventory to choose from. 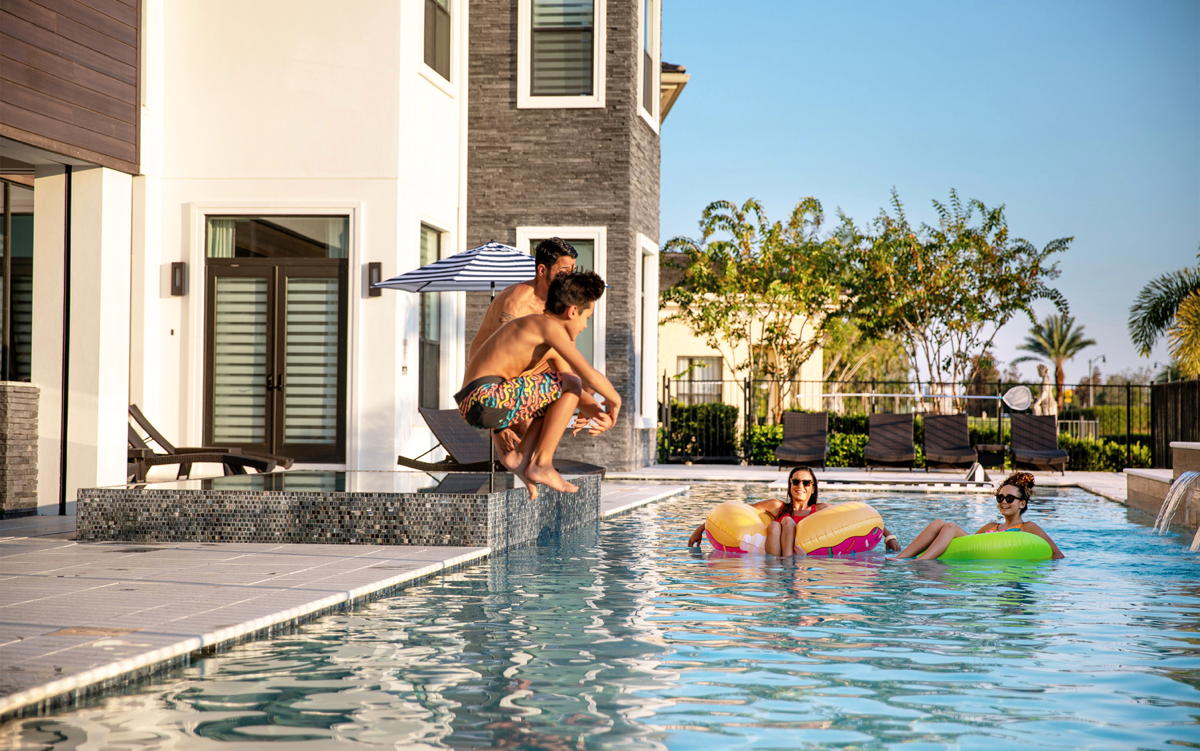 With some 35,000 rentable homes, Kissimmee is set up for a range of audiences, from small to large families (multigenerational bookings are big business) to even corporate groups (many homes are located on championship golf courses and come equipped audio/video fixings).

But what’s drawing crowds away from traditional hotels is the value that comes with renting a vacation home.

For example, at Encore, a Kissimmee-based home rental community, guests can rent a three to four-bedroom house for roughly $300 to $400 (USD) a night.

Which is what a family might, for example, pay for a hotel room in nearby Lake Buena Vista in Orange County.

Except with vacation homes, you get separate bedrooms, your own pool, a barbeque and, in the “mansion segment” (homes with 10 to 18 bedrooms), a ton of other fun amenities, such as in-house bowling alleys, movie theatres, arcade rooms and themed bedrooms for the kids.

It’s not a resort, but it’s like a resort.

Adding to the 800 homes at Encore – a “purpose-built” community (nobody actually lives there full-time) – is a main pool, waterslides, restaurant, bar, gym and Disney concierge desk, all located in the neighbourhood’s centre.

“You have all the amenities of a four or five-star resort, but the convenience of having your own house,” Minich explained.

From roughly 2014, inventory has skyrocketed as investors continue to break new ground on new, modern neighbourhoods, designed exclusively for visitors.

Encore, Solara, Magic Village, Jeeves and Reunion are just a few of the many names leading the rental scene in Kissimmee, which is located just minutes away from Florida’s most popular attractions, such as Walt Disney World Resort, Universal Orlando Resort, SeaWorld Parks and Entertainment and Legoland Florida Resort. 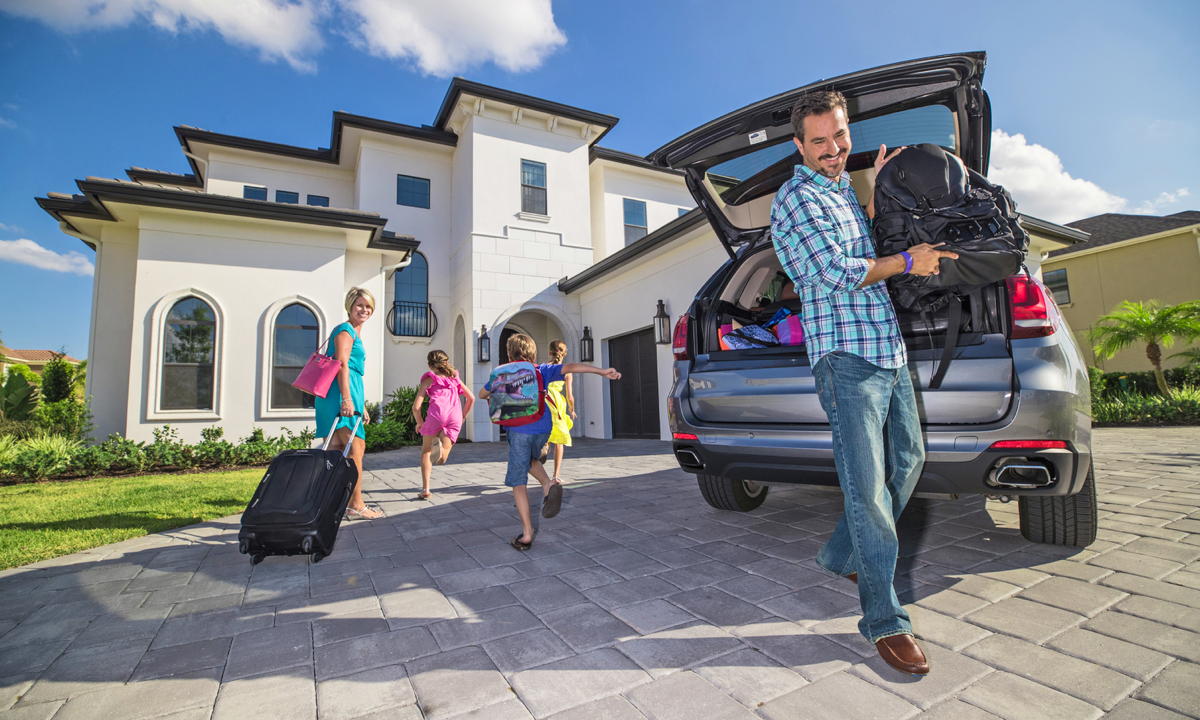 Some properties go as far as integrating both hotel rooms and vacation homes together: at the new Margaritaville Resort, for instance, there’s both upscale rooms and residences, called Margaritaville Cottages.

The big difference between 2014 and now, however, is that vacation homes in Kissimmee are now “travel agent friendly,” Minich told PAX.

“Some people hear ‘vacation home’ and they think of the old Airbnb days where somebody was renting out a house on their own,” Minich said. “Nowadays, all of this inventory is professionally managed, with housekeeping. It’s a different product compared to the old days.”

Larger homes tend to have key codes for each bedroom, so each guest can have their own locked room, and pool and kitchen-equipped properties are set up for meetings and social events.

Some homes don’t have kitchen islands, but rather, larger “continents” so groups can gather in one space and collaborate.

“It’s an incredible experience,” said Susan Webb, president of VoX International, sharing anecdotes of a meeting she once attended at a vacation home in Kissimmee. “When people don’t want to be in a 5,000-room hotel, here you go.” 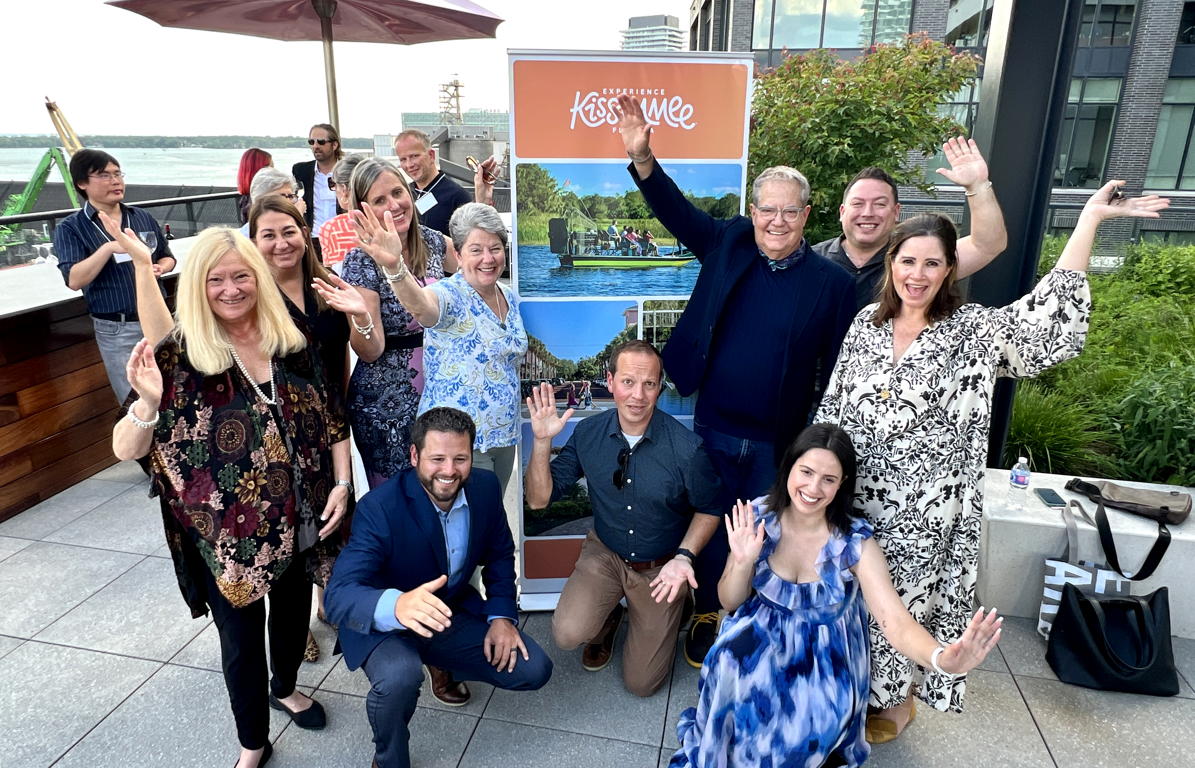 Beyond accommodations, the way in which visitors are exploring Kissimmee is changing too, Minich said, noting the rise in demand for nature-focused activities (another area that Kissimmee excels at).

“In the morning, you could be in the shadow of the world’s most famous castle [at Disney World], and 25 minutes away from there, in the afternoon, you could be kayaking on the headwaters of the Everglades in the shadows of 300-year-old cypress trees,” Minich said.

The days of “warrior theme park people” – tourists who try and squeeze in as many rides and attractions as possible during a visit – have started to cool ever since Walt Disney World introduced a reservation system for passes, a pandemic-era policy that is here to stay, Minich said. 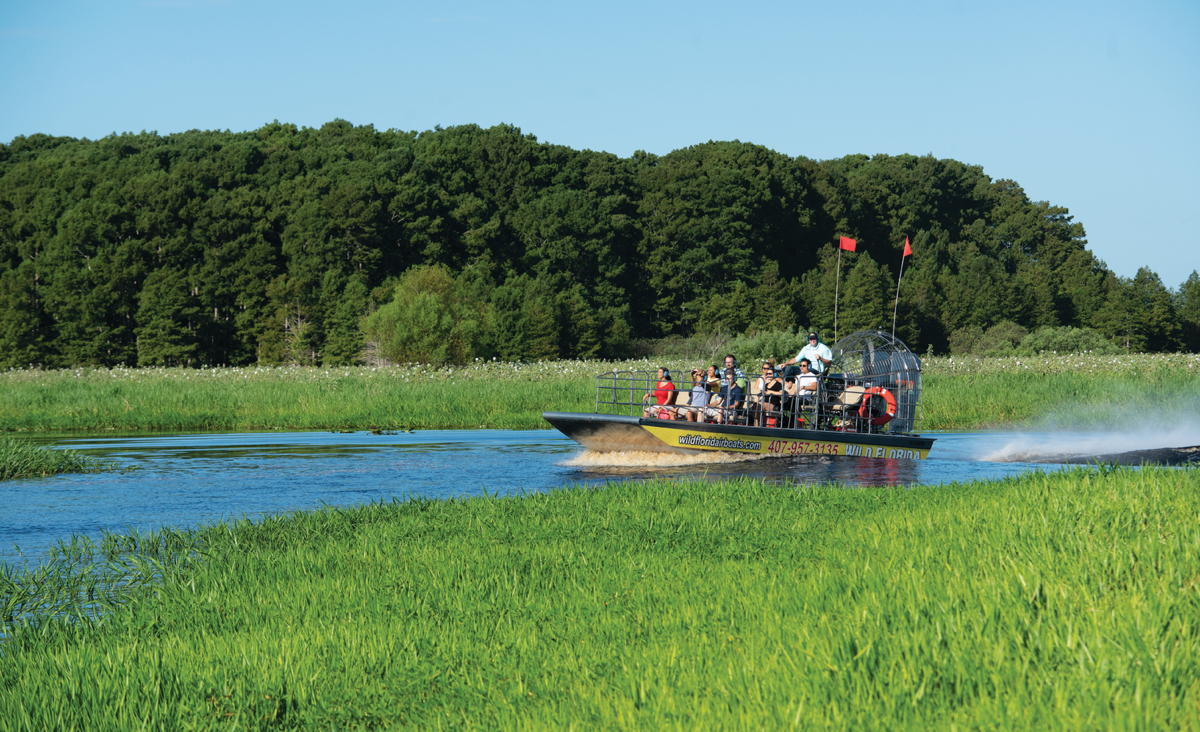 “What that means is that people have to sit down and plan out their days,” he said. “They have to pick their [theme park days] and that includes selecting days off.”

Which is where Kissimmee’s other outdoor attractions come in, such as kayaking in Shingle Creek or visiting Tree Trek Adventure Park, Gatorland wildlife preserve or Wild Florida, a safari attraction that offers air boat tours.

Lift to Orlando ramps up

Tuesday’s cocktail welcomed many from Experience Kissimmee – the team was already in town for the Destinations International conference – so the tourism board had plenty of opportunities to engage with partners about an action plan for the fall and winter season.

Ever since the U.S. dropped its pre-departure testing requirement in June, inquires and bookings from Canada have gone way up, said Minich, who doesn’t think the return of randomized on-arrival testing in Canada will impact Kissimmee’s numbers all that much.

Among the many exciting happenings down south is the ongoing celebration for Walt Disney World’s 50th anniversary and the new Peppa Pig Theme Park at Legoland Florida Resort, which opened as a Certified Autism Center and offers accessible rides for those in wheelchairs. 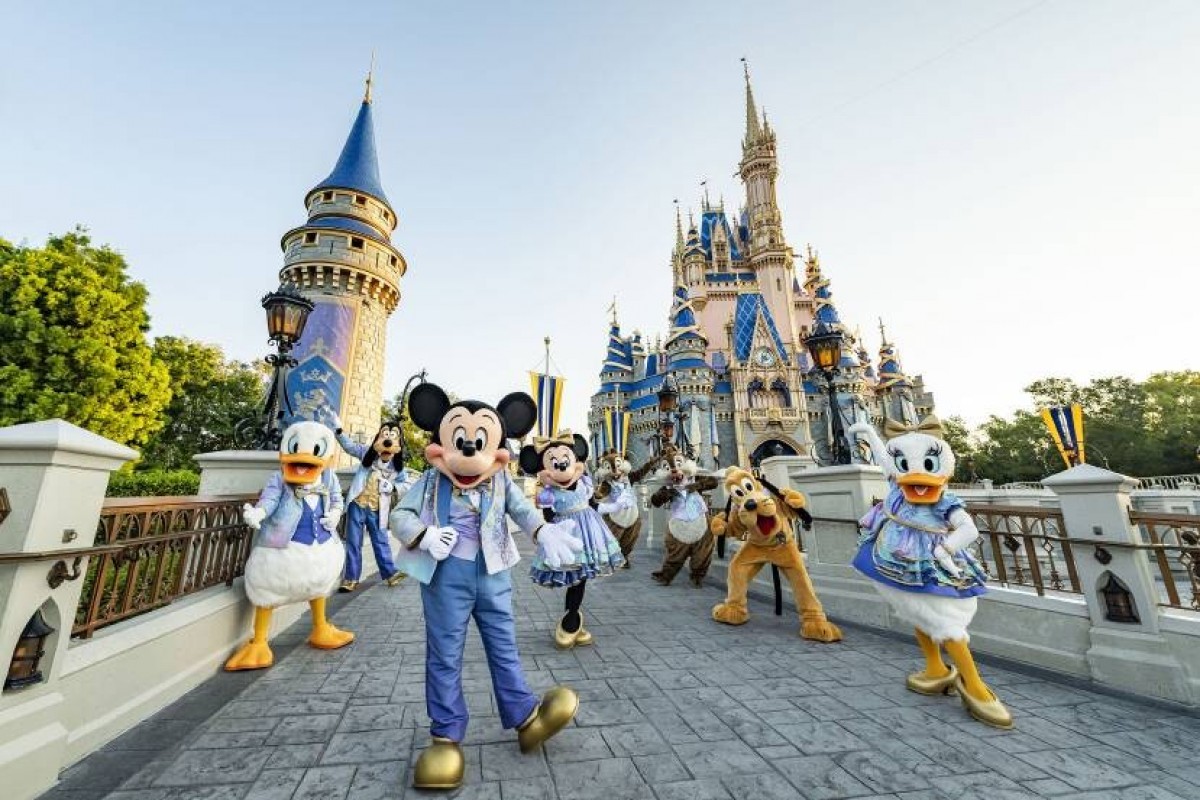 Lift to Orlando International Airport (MCO), from Canada, is also ramping up this fall and winter.

Air Canada will begin service from Halifax, Ottawa, and Quebec this October.

Air Transat is set to add flights from Quebec in December and Halifax in February 2023 and Sunwing will launch daily service from Toronto on Nov. 1. 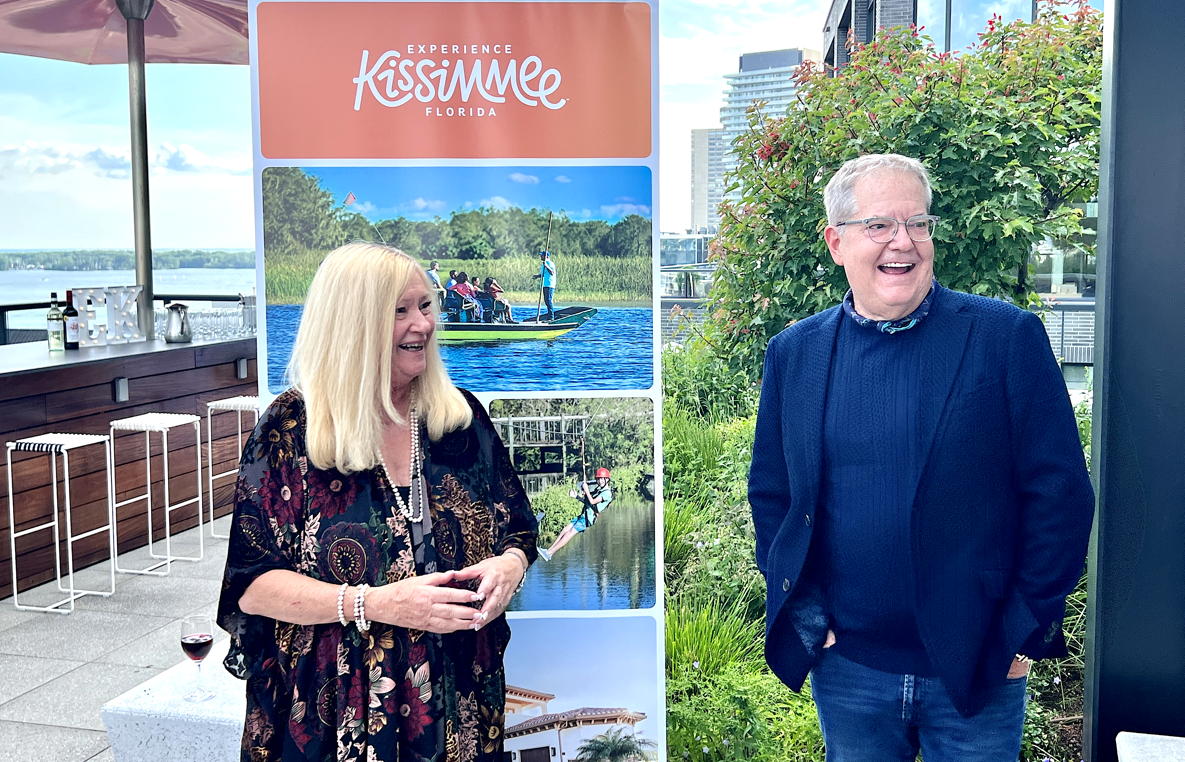 Overall, the number of passengers arriving into MCO increased from 13,460 in January 2022 to 44,202 in April, and with additional flights from Canada resuming in the coming months, an increase in passenger count and diversity of origin markets is expected, says Kissimmee’s tourism board.

“The Canadian market is back strong,” Minich said.