On Location: What’s it like travelling with G Adventures? We joined agents in Turkey to find out

It’s Sunday night in Istanbul and a fire has broken out in the street.

The flickering of bright-orange flames illuminate a dimly-lit cobblestone road that, just hours ago, was bustling with engine-purring scooters, wide-eyed tourists and tram-riding locals determined to get home from work at a decent hour.

Someone’s started a bonfire, and the glowing eyes of stray cats – Istanbul’s population within a people population of more than 16 million people – seem to be the only other witness to this burning inferno that’s quickly intensifying.

As we sat watching the situation unfold from an outdoor terrace some 10 metres away, I turn to my colleagues – an esteemed group of Canadian travel advisors who’ve come together for an eight-day adventure in Turkey – and wonder, for a second, if we should call the fire department.

Suddenly, a man holding a rod-like tool emerges from the blackness and stirs up the blaze, which has been ignited on top of a table that wobbles due to the unevenness of Istanbul’s stone-paved roads.

As flames roar in intervals, he reaches into the heat and pulls out what appears to be a clay pot partially wrapped in tin foil. With rod in hand, he proceeds to rapidly strike the pot, creating a tapping sound that echoes down the street.

POP! Within seconds, the lid on the clay pot bursts off, releasing a small cloud of steam.

Everything’s in focus now. This isn’t an emergency. This is dinner. 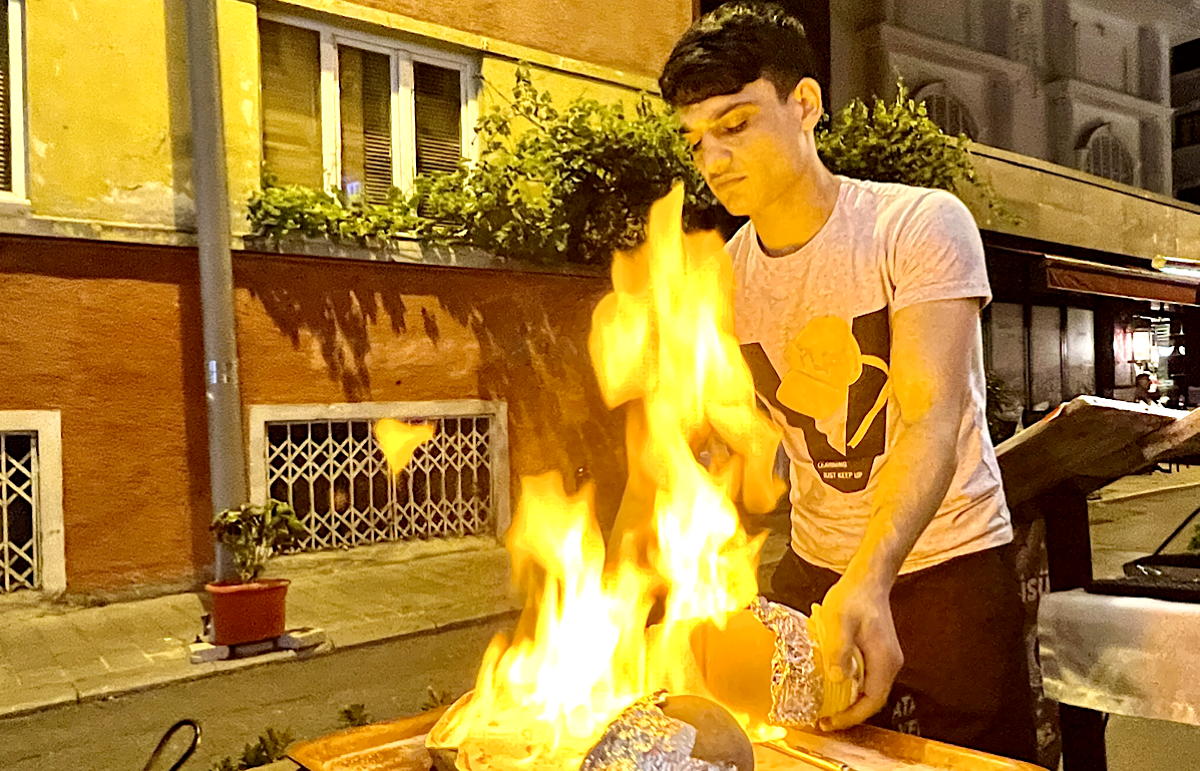 Testi kebab – meaning “jug” in Turkish, also known as pottery kebab, is a regional speciality one will find in restaurants all over Istanbul and greater Turkey.

Typically made with lamb, beef or chicken and vegetables like carrots, celery, onions and potatoes, this delicious dish, which originated in Cappadocia, is famous not only for its rich taste, but also for how it’s prepared.

Pots are sealed and left to simmer in juices for hours, and as a form of tableside entertainment, flame-trained servers will crack open hot jugs and pour out the sizzling contents onto a plate of rice and potatoes.

When mixed together, it’s like a divine form of Turkish jambalaya.

The Best of Turkey

Testi kebab was just one of several culinary treasures Canadian travel advisors discovered during a week-long “Best of Turkey” trip with G Adventures from Aug. 14 to 21.

PAX covered the food, culture, history and beach-filled FAM, exclusively, joining agents on a journey through northwestern Turkey, from eclectic Istanbul, where centuries-old bazaars, palaces, fortified walls and mosques await, to coastal towns along the Aegean coast to rural parts where the crumbling remains of ancient cities, like Ephesus and Hierapolis, have been unearthed. 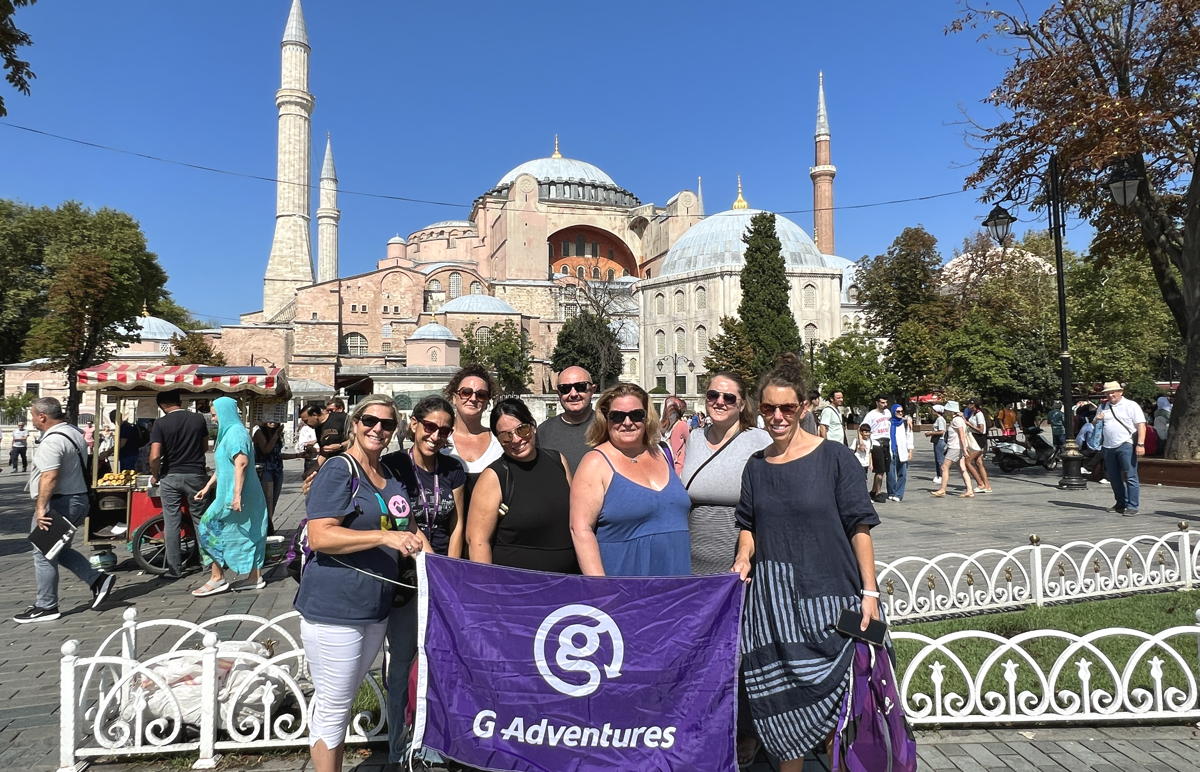 Joining agents on the immersive trip was David Green, managing director for Canada and vice-president of global and customer operations at G, who noted the rise in demand for European travel as global tourism reopens.

“A lot of people know G Adventures for South and Central America and Asia,” Green told PAX. “During the pandemic, we saw a market shift and Europe saw a huge uplift.”

Our tour in Turkey – one of four FAMs G has hosted for the trade this year – drew both new and experienced agents, many of whom were travelling with the Canadian tour operator for the first time. 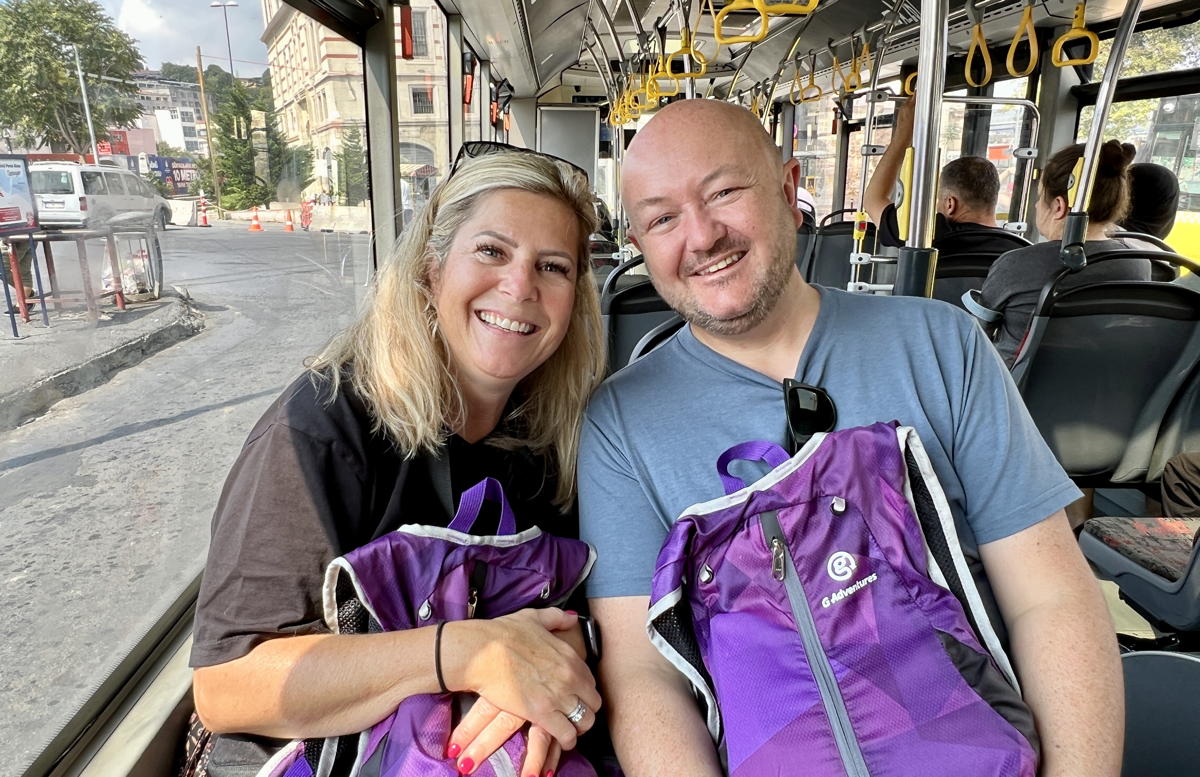 Advisors had to apply for a spot on the coveted adventure, which gave everyone a first-hand look at how G operates its small group tours, which typically involve 12 to 16 travellers and attract various ages.

“The common thread [among the agents on the FAM] is that they love G Adventures, they want to sell us, and they want to learn so they can sell it to their clients,” Green said.

Turkey, officially the Republic of Türkiye, is one of the earliest settlements in the world, built by the Roman, Byzantine and Ottoman empires that once ruled there.

The transcontinental country, which is located mainly in Western Asia, save for a small portion in Southeast Europe, shares borders with the Black, Mediterranean and Aegean seas.

It’s also a melting pot of backgrounds – Turkish people can be of Armenian, Assyrian, Kurdish, Greek or Georgian descent, and in religious circles, there are Orthodox Christians, Jews and Muslims (the latter representing the majority). 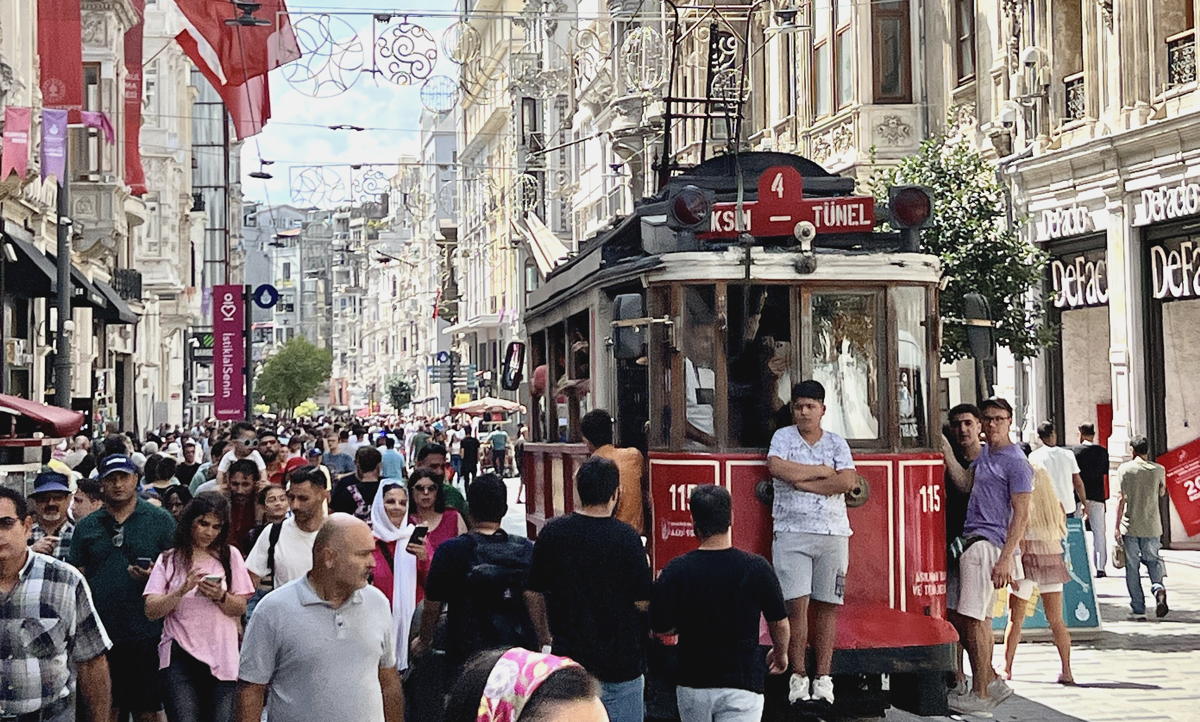 Our key to unlocking this fascinating world lied in the hands of our kind-hearted and always-smiling CEO, Gonca, who, as “Chief Experience Officer” (G’s term for tour guide), elevated our trip with invaluable knowledge and guidance.

With an educational background in international relations and politics, Gonca had an answer for everything as she dutifully, in van and on land, led us through cities, villages and towns, peeling back the layers of Turkey, her home, to reveal a wonderous place of mystery and beauty.

She also had every logistic covered, which made our G adventure accessible and stress-free. 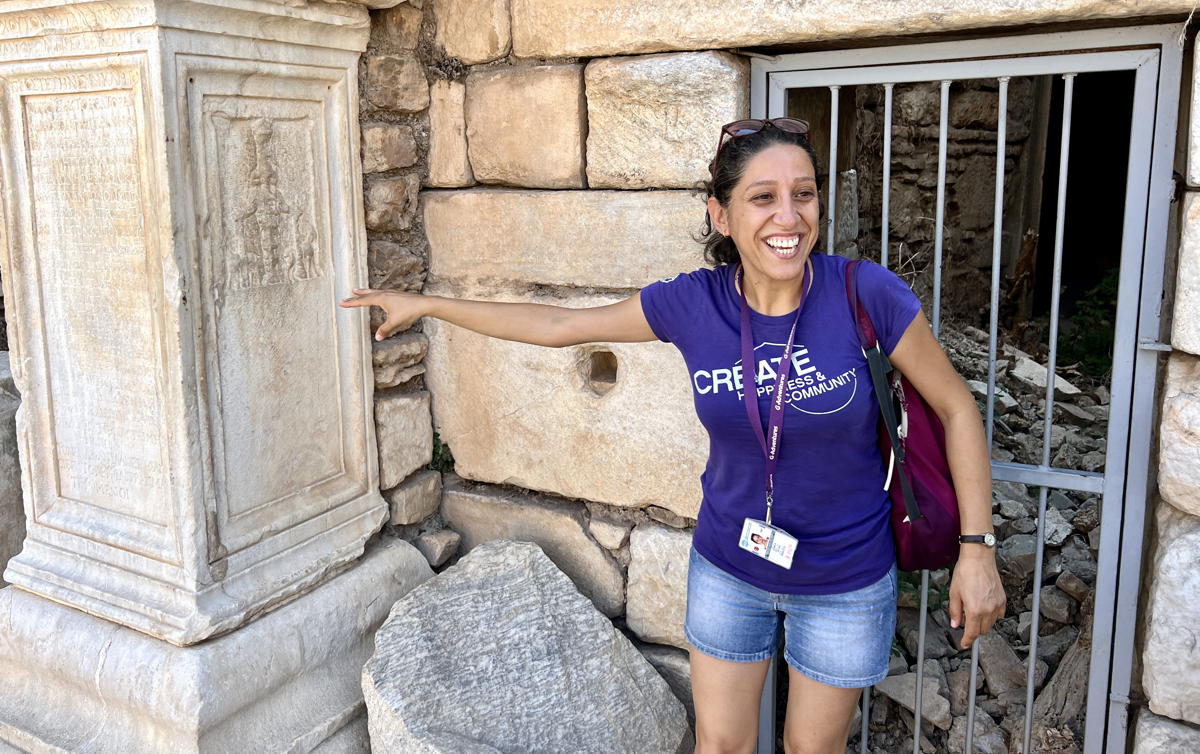 It’s true when they say G’s CEOs are the heart and soul of the company.

With transit tunnels crossing underneath the apartment and fortress-peppered Bosphorus Strait, the sprawling megapolis sees more than a million people commute between Europe and Asia each day. 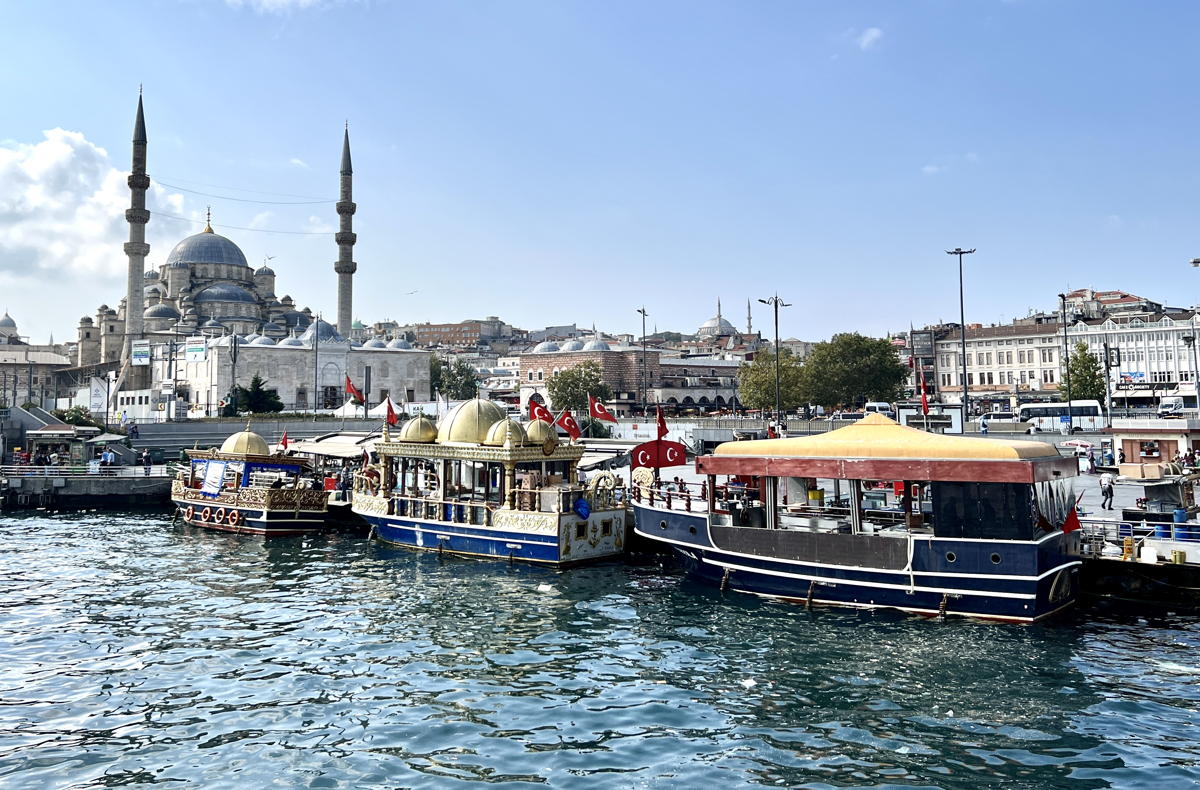 A city reflective of past empires that once ruled there, Istanbul was founded as Byzantium in seventh century BC by Greek settlers.

In 330 AD, emperor Constantine the Great made the land his imperial capital, renaming it first as New Rome. Today, in Istanbul’s Sultanahmet district, tourists can visit the Roman-era Hippodrome, which was once a site for chariot races. 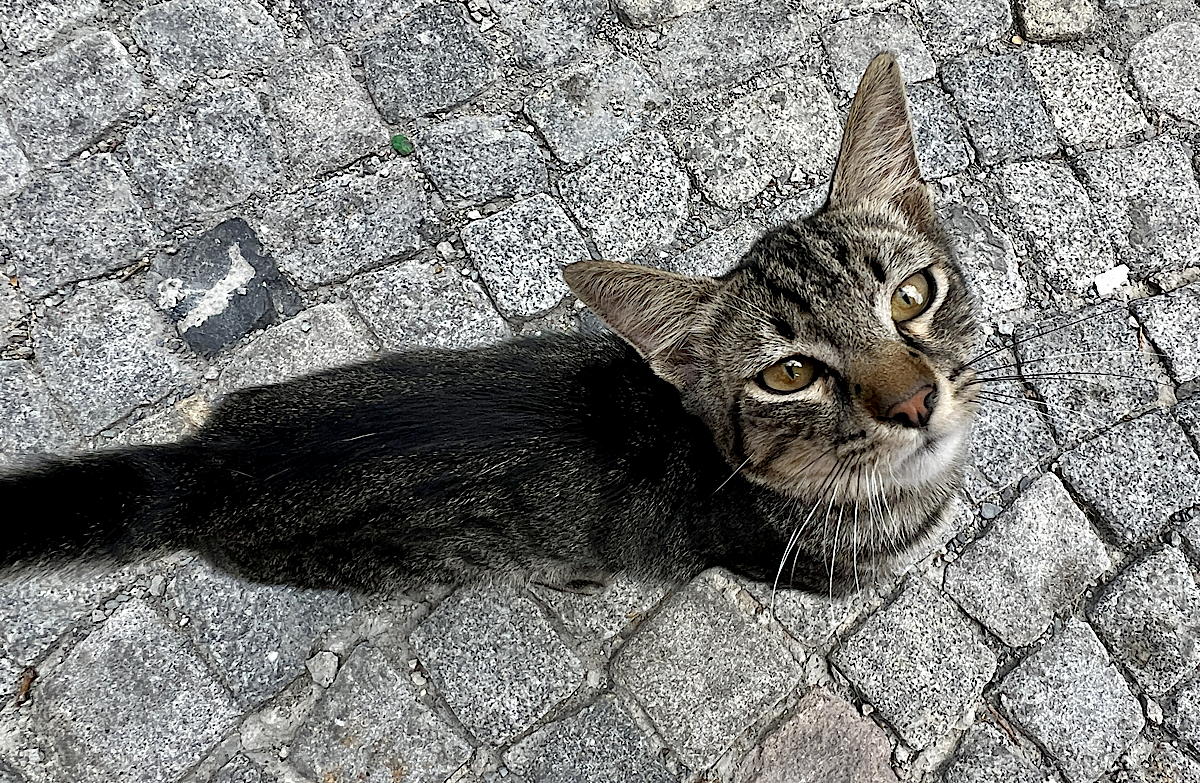 There are sites like the Grand Bazaar, regarded as the world’s first shopping mall, dating back to 1455.

Today, the touristy marketplace has some 4,000 shops, where one can find everything from fake designer jeans to jewelry. Hundreds of thousands of people squeeze into this sprawling covered marketplace, where bargaining is encouraged, on a daily basis.

The fun part is getting lost in the pure madness of it all. 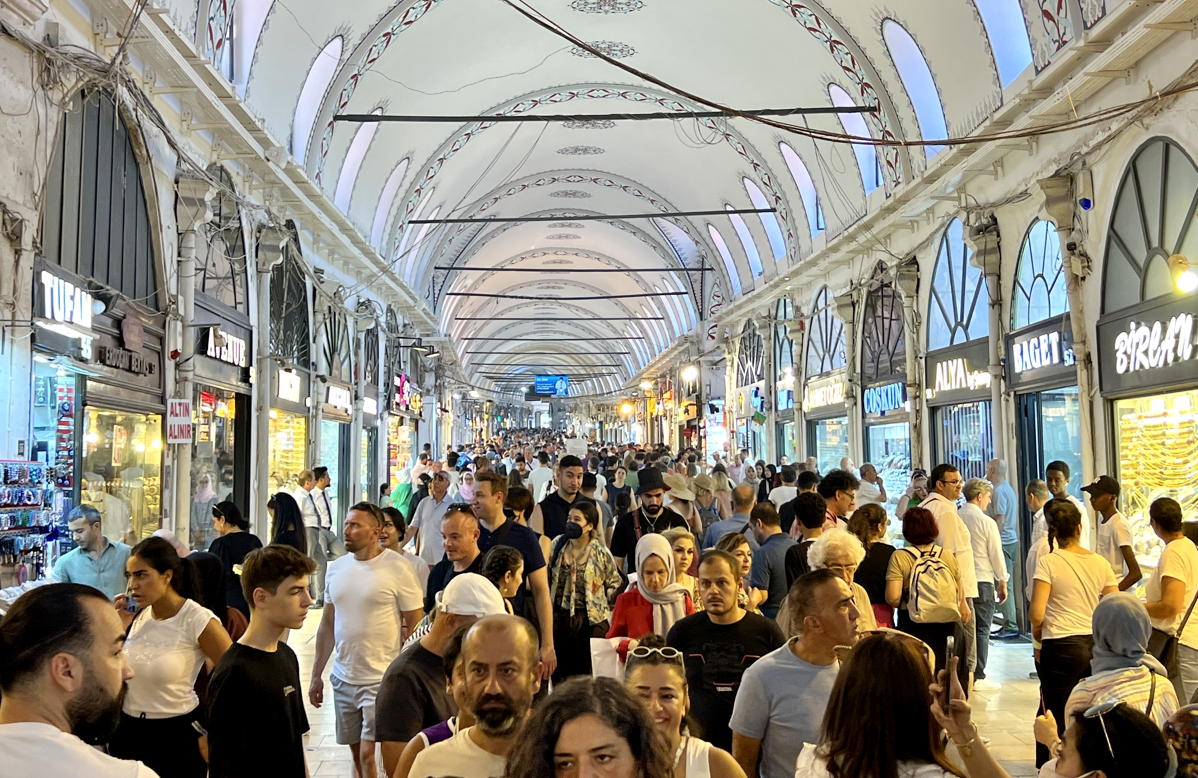 Another must-see attraction in Istanbul is Hagia Sophia, which was built as the Christian cathedral of Constantinople more than 1,480 years ago.

It’s been said Hagia Sophia is a symbol of Byzantium in the same way the Parthenon represents classic Greece or the Eiffel Tower defines Paris. The building’s interior dome-like architecture and mosaic art is overwhelmingly beautiful.

Hagia Sophia is now a mosque — one of 3,469 in Istanbul that crackle alive with a call to prayer five times daily from loudspeakers affixed to minarets. This religious ritual occurs all throughout the country. 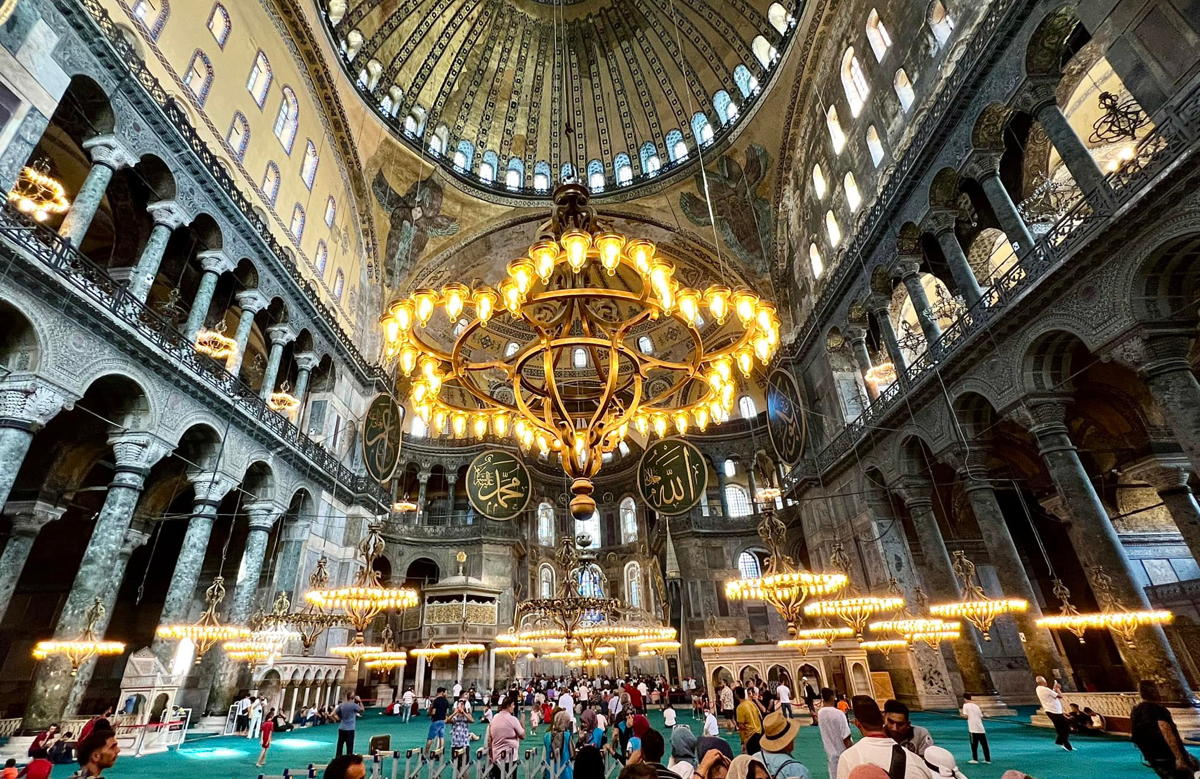 Our host hotel in Istanbul, the Golden Horn (named after the primary inlet of the Bosphorus Strait), was conveniently a ten-minute walk away from Hagia Sophia, and other points of interest, in Istanbul’s UNESCO-blessed Old City, which sits on a peninsula pointing to Asia.

G’s hotel partners are chosen for their practical locations and connection to local economies. Accommodations are not one star, but they’re not five stars either.

(The exception would be G’s National Geographic tours, which offer elevated hotel stays). 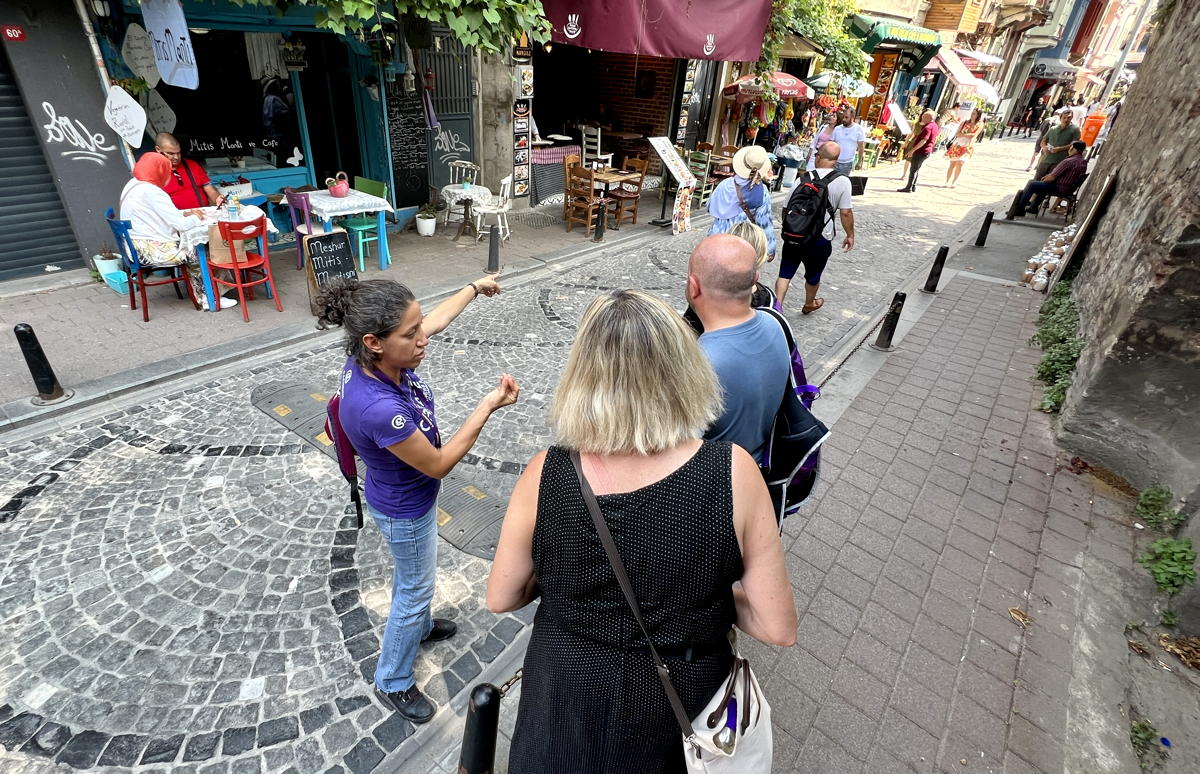 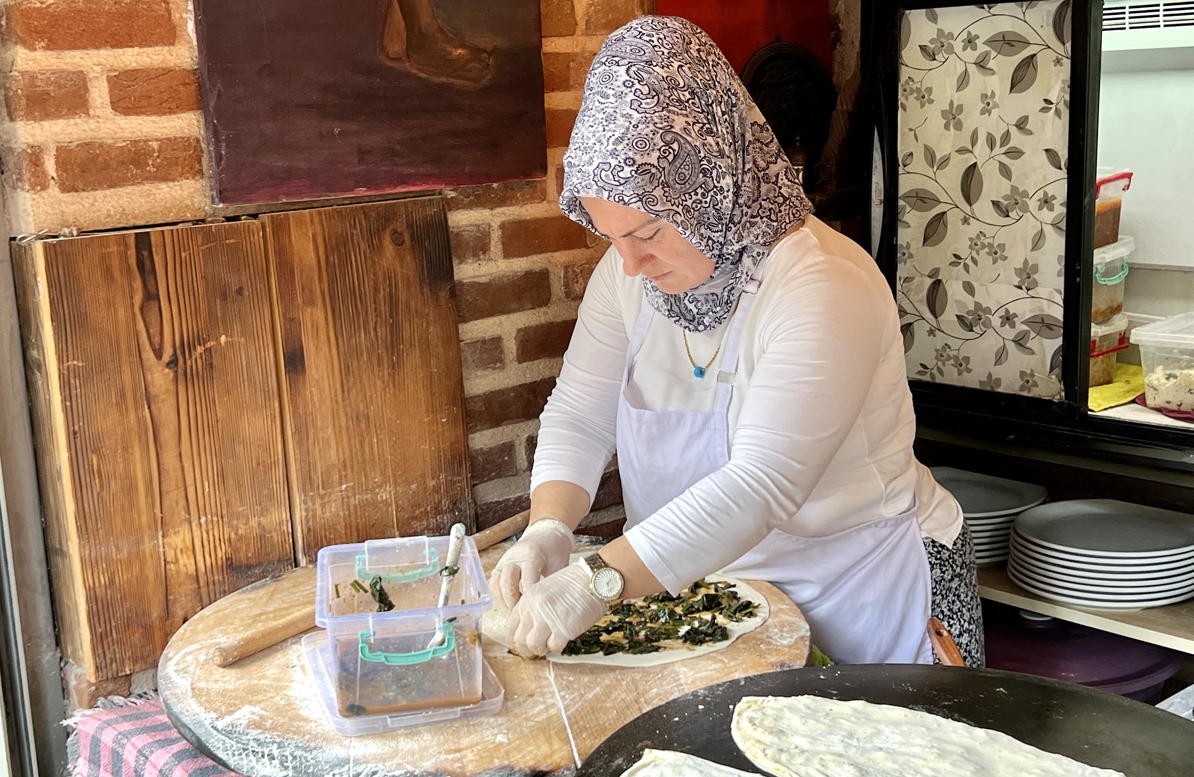 Our hotels in Turkey had the basics (air conditioning, breakfast, friendly service), which is all we needed.

Really, when travelling with a content-rich company like G, hotels are the last thing you write home about. It’s all about the destinations.

And keeping money in destinations.

G Adventures, guided by the belief that tourism can be one of the world’s greatest forms of wealth distribution, brings the concept of community tourism into sharper focus. 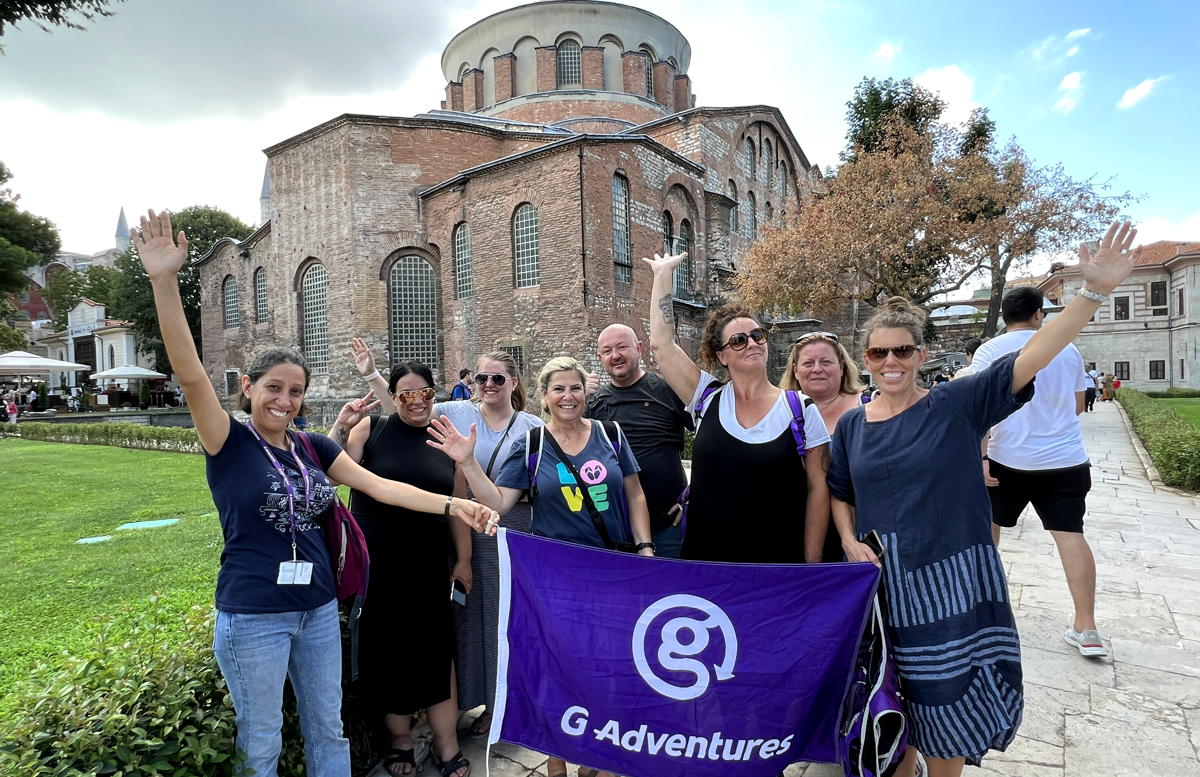 The company uses a “Ripple Score” to show customers (and travel agents) the percentage of money it spends locally on trip services, like hotels, restaurants, and transportation.

This tool provides transparency around the economic impact of a G experience, and in Turkey, the Ripple Score is 100.

Which means all the services that G uses in Turkey, like hotels, are locally owned.

Learn from a local

It pays to have G CEO in car-honking, populous Istanbul, which is a full-sensory experience.

Gonca (in addition to knowing absolutely everything about the city) had all the travel tips.

Like what to wear when visiting Hagia Sophia. (There’s an enforced dress code. Shoes must be stored, pants must conceal knees and women must cover their shoulders and wear a headscarf). 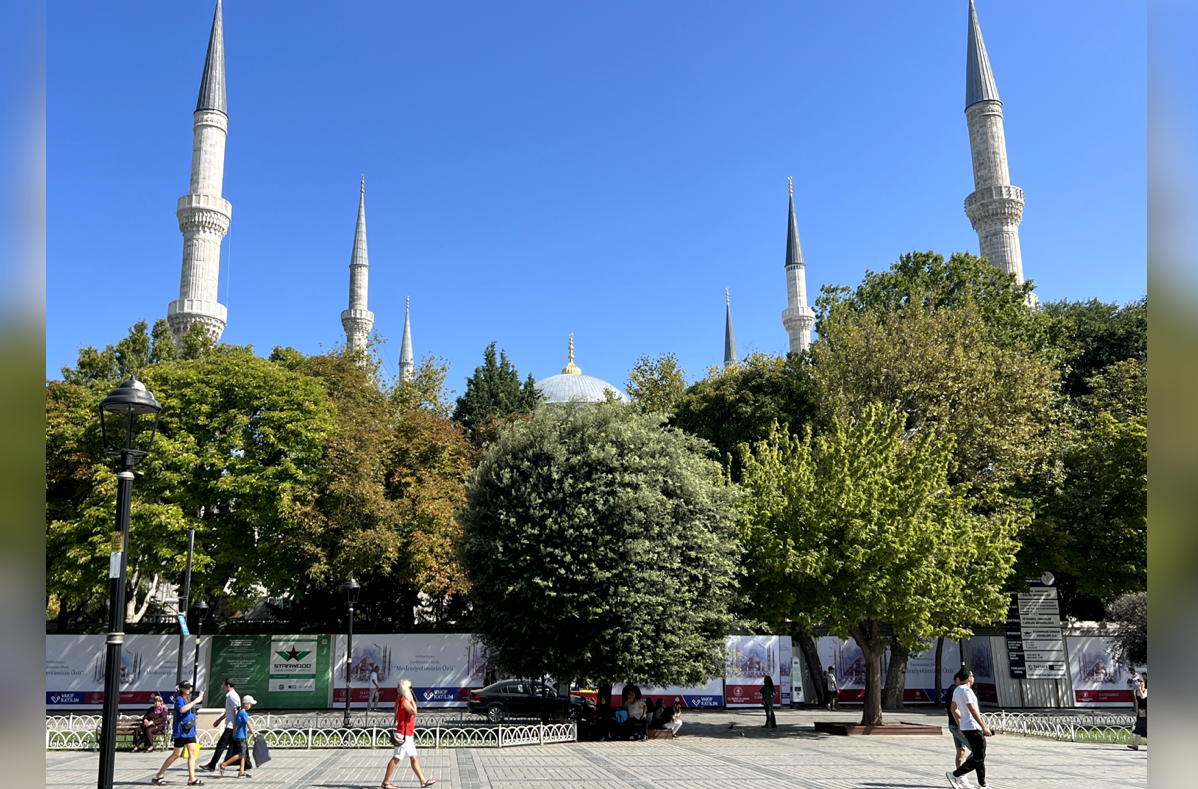 She had time-saving advice: skip visiting the Blue Mosque because it’s under renovation.

Or my favourite: wait until 5 p.m. to visit Hagia Sophia. The cruise crowds will be gone. There will be no line. (She was right).

And practical wisdom: keep your backpack in front of you to outsmart pickpockets (Istanbul, for the record, felt safe at all times).

Gonca, as our local eyes and ears, was also equipped with a rolodex of recommendations. 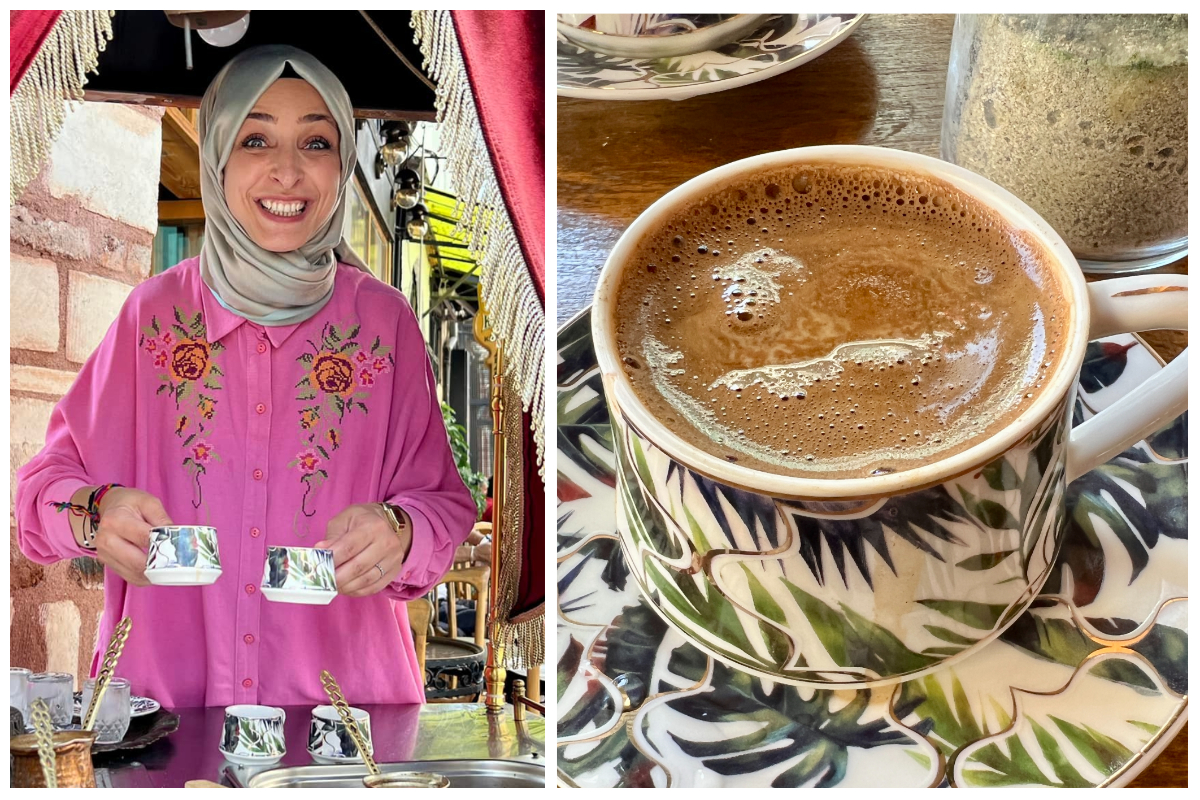 During an optional pre-FAM tour of Balat, a hip Istanbul neighbourhood and former Jewish quarter of colourful houses and vintage-style cafes, she knew exactly where to find the best Turkish pancakes, coffee and street snacks, like “simit,” a bread ring encrusted with sesame seeds.

“Don’t worry. I’ve tried all of these restaurants. They won’t make you sick,” Gonca would say, lightheartedly, with a hint of reassurance. 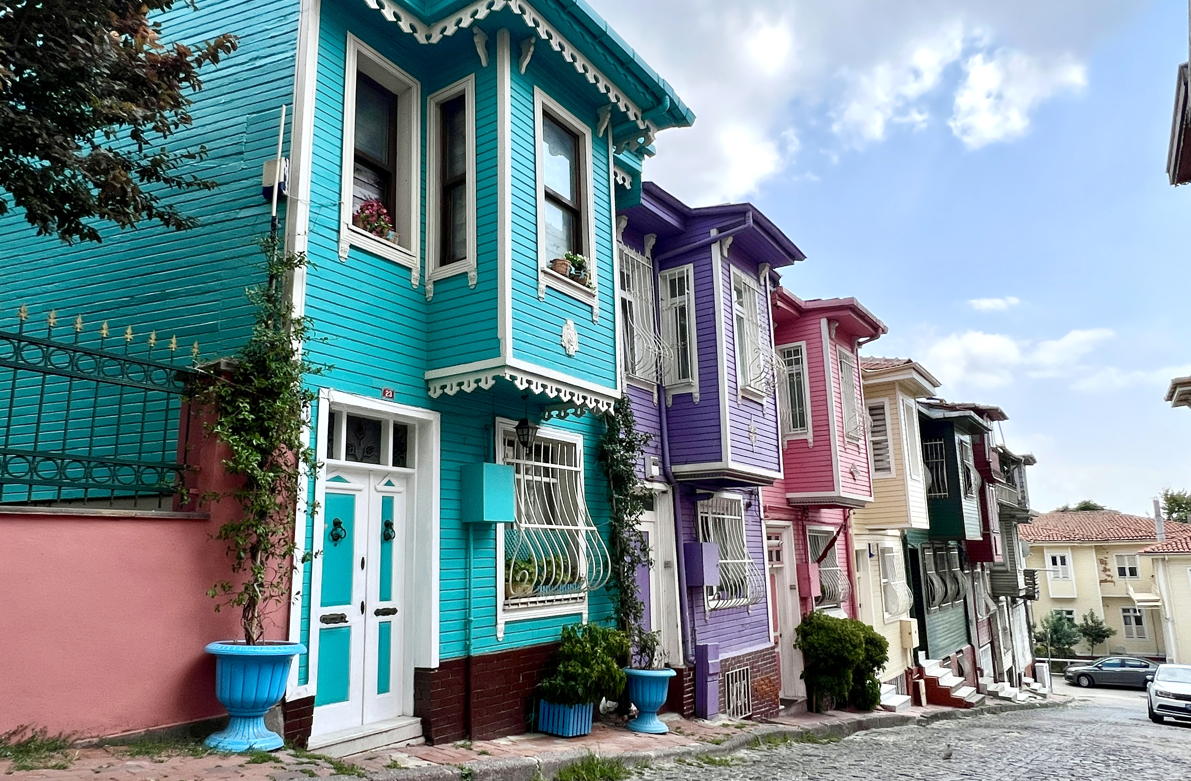 As a group, we ate together. But the culture at G is to give travellers space to decide if they want, for example, to dine elsewhere on their own outside of pre-booked restaurants.

Freedom and flexibility are the keywords. But the reality is that friendships form quickly when travelling and most groups, almost always, tend to eat together, Green said.

The camaraderie formed on a G adventure – a shared experienced – is real. “At the booking stage, agents can tell clients they can go solo, but [clients] likely won’t do that,” Green said.

Dining times, too, are flexible. Six o’clock? Eight o’clock? Dinnertime is whenever the group wants to eat. 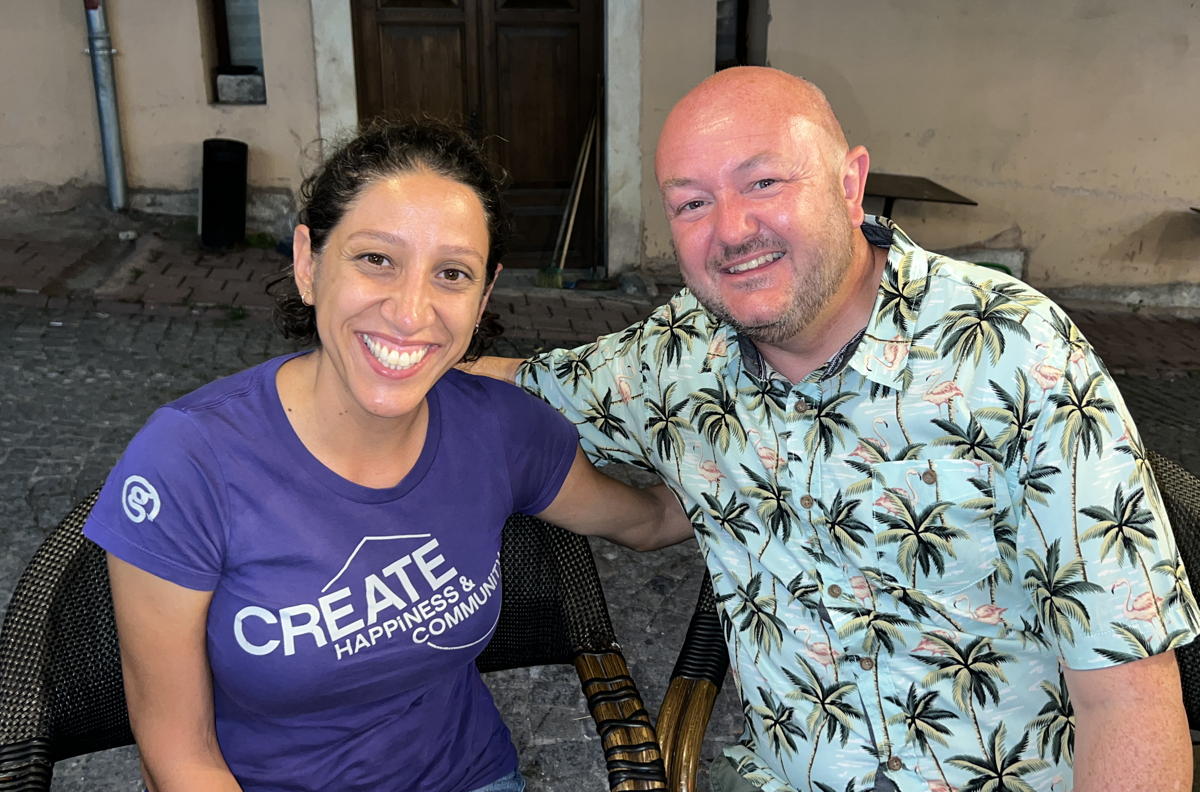 She also introduced us to new beverages, like mind-awakening raki, Turkey’s licorice-y national alcoholic drink (also known as “Lion's Milk”), and showered us with sweets, such as pistachio-sprinkled baklava and chewy Turkish delights from Istanbul’s Egyptian Bazaar.

“I was not expecting Turkey to offer so much diversity in food. I was really taken aback,” travel advisor Leah Holt of Go Travel with Leah told PAX. “There’s European influence, but Turkey has its own flavours and dishes.”

So much to taste, so little time. Pass the kebabs, would ya?

Stay tuned for Part Two of PAX’s exclusive report on G Adventures’ “Best of Turkey” tour with Canadian travel advisors. Next up, we head to Çanakkale, Ayvalık, Selçuk and Pamukkale to explore legendary battlefields and ancient cities. A dip in the Aegean Sea and “G For Good” moments with Planeterra, too!