Since Sunwing resumed its southbound service from Toronto and Montreal, customers have been taking a “wait and see” approach to travel, booking beach vacations at the “very, very last minute,” says Deana Murphy, vice-president of sales at Sunwing Travel Group.

“We are selling packages on Friday for Saturday and Sunday travel,” Murphy told PAX in a recent interview. “This is something we haven’t seen in a long time.”

Sunwing kickstarted its operations on Nov. 6 after grounding its fleet for more than 230 days in response to the COVID-19 pandemic.

“Getting back in the air was a huge step,” said Murphy. “As a company, we took our time. We did this responsibility.”

Murphy, alongside Dave Wright, Sunwing’s director of sales for Ontario and Atlantic Canada, spoke with PAX, via Zoom call, while on location at the Royalton CHIC Suites Cancun, where the pair recently stayed from Nov. 14-21. 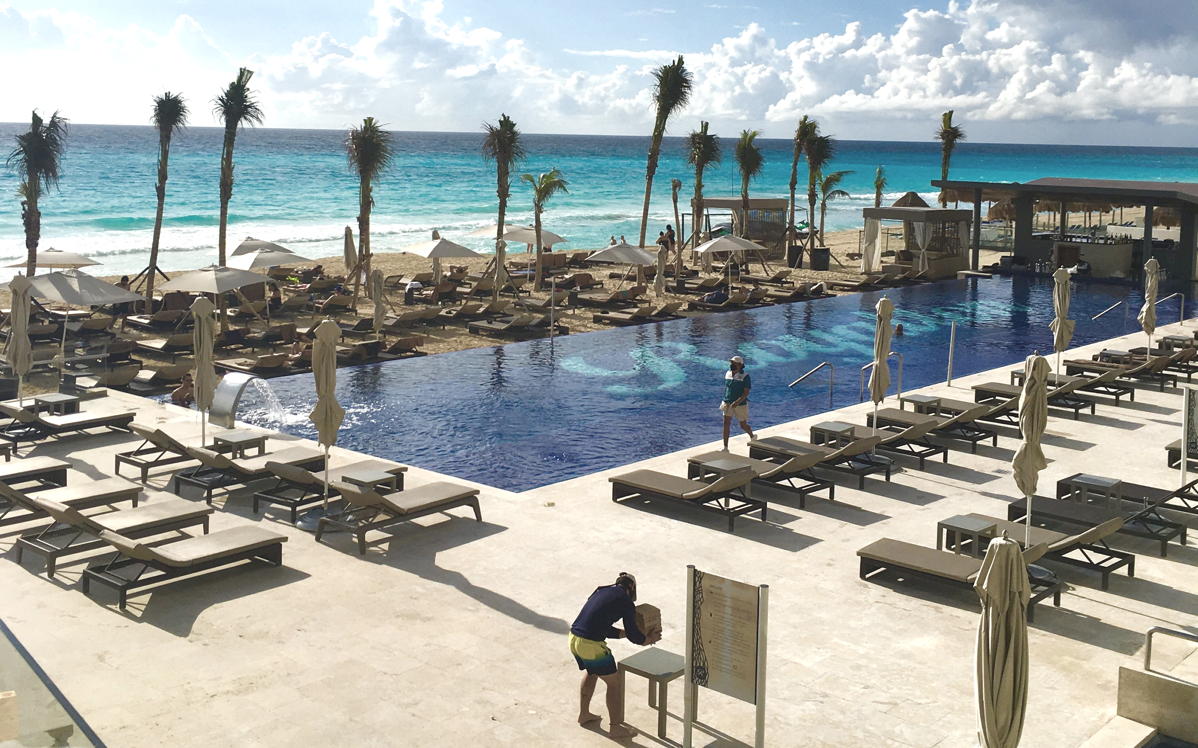 The team was there to see Sunwing’s health and safety protocols – a program called Safe With Sunwing – in action, for themselves, for the purpose of educating travel agents and consumers.

“Safe and responsible travel is still possible,” Murphy told us.

“An army” of ambassadors wearing Sunwing t-shirts will be one of the first things customers will see when arriving at Toronto or Montreal airport, said Murphy.

Customers can now check in for their flight and obtain their boarding pass using the Sunwing app. 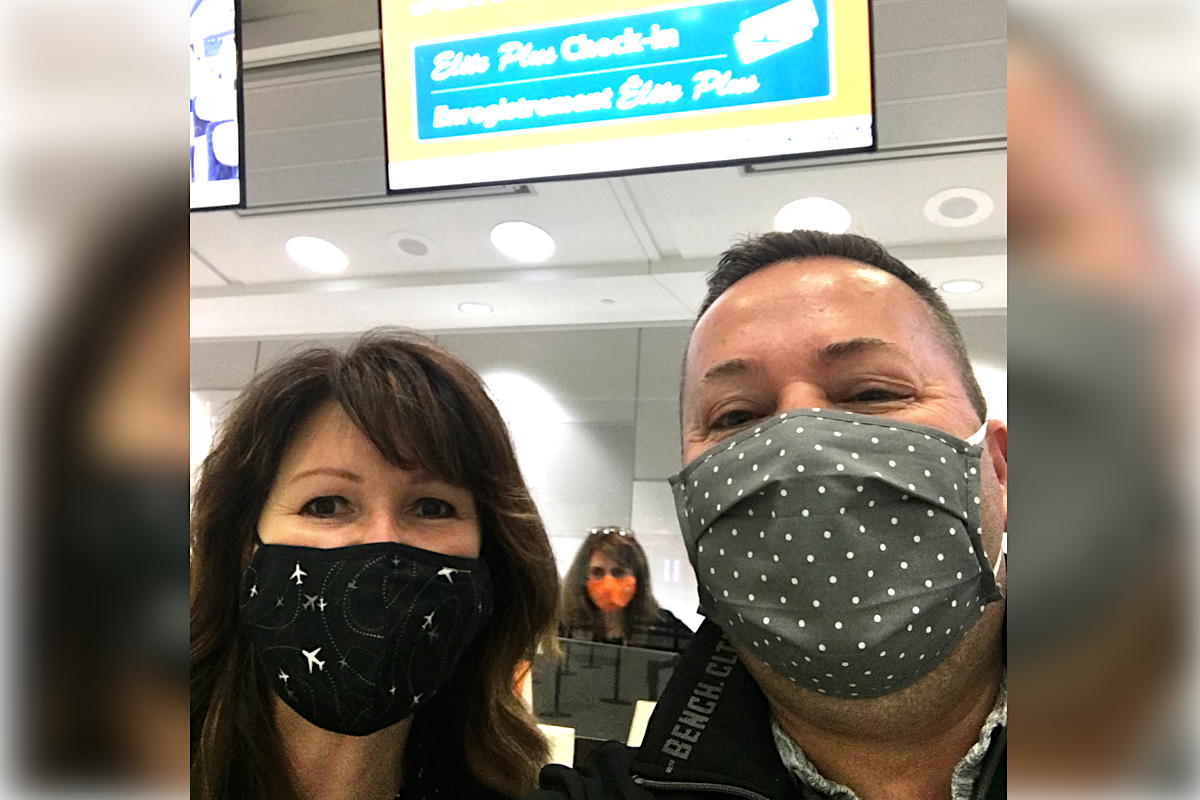 Travellers, in advance, should also have the ArriveCAN app (now a mandatory requirement for submitting travel information for re-entering Canada) and the CanBorder app downloaded before departure.

The ambassadors are there to help customers download these apps, if help is needed.

READ MORE: Sunwing will be using this powerful antimicrobial spray to treat its aircraft

As for the airport and flight experience, the “vast majority of people were very respectful of all the protocols,” said Murphy, referring to measures like mask wearing and social distancing.

“Most people really do want to respect the rules and are super happy to travel,” she said.

When Murphy and Wright arrived at Cancun International Airport (CUN), they had their temperature checked “and we didn’t even know it,” said Murphy.

Destination representatives are no longer allowed to touch luggage until it reaches the transfer vehicle, where the Nexus team sanitizes all bags, first, before loading them into the van.

Vehicles are also capped at 60 per cent capacity to reduce crowding.

“We are selling more private transfers,” Murphy told us. “People like that extra layer of security.”

When the duo arrived at Royalton CHIC Suites Cancun, their luggage was sanitized again by hotel staff.

From there: “It was a lot of hand sanitizer and spreading people out,” said Murphy.

The property, that week, was hovering at 55 per cent occupancy, which is just below the maximum cap for hotels, (60 per cent), in the Mexican state of Quintana Roo.

“The manager said the majority of hotels in the region are more than half full,” said Murphy. “Our resort didn’t feel empty.”

To that end: “Social distancing was not an issue,” she added, noting how most guests were being respectful.

“You have to wear your mask when walking around, going to restaurants, walking to the beach and into elevators,” said Murphy.

The rooftop terrace at Royalton CHIC Cancun, which is open only to Diamond Club members, was “spectacular,” said Murphy, as it offered an open space for people to enjoy.

What was the mask situation at Royalton CHIC Suites Cancun? Were all guests following protocol?

“You see the odd person forget,” said Murphy, but “most were very respectful.”

“You’re going to get a few that aren’t wearing masks, but you have to be responsible for your own behaviour.”

Murphy explained how she brought a variety of masks – “every colour, shape, size, pattern” – to go with outfits and such.

“A lot of people did that. We saw some creative masks,” she said. 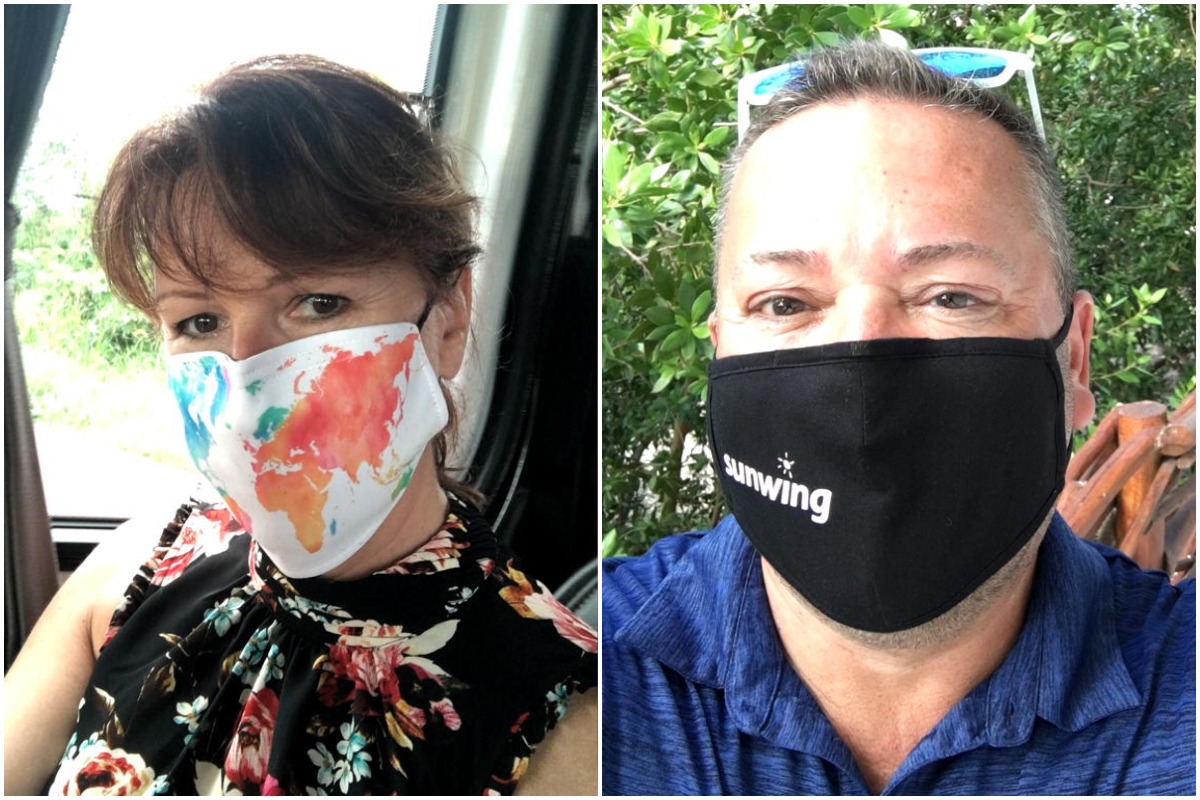 “In Canada, when you go to a mall or restaurant, you wear a mask. It’s very similar to what’s happening down here [in Cancun],” he said.

Wright said people’s willingness to wear masks extended to buffet areas, which are still in operation, except with a touchless approach.

“There’s no utensils for guests to touch themselves,” he said. (In other words, staff prepare plates of food and hand them to you).

Does this method lead to long lineups at the buffet? “Not at all,” said Wright. “They had multiple staff working, especially during peak times.”

There’s plenty of signage telling guests what to do, when in doubt, said Murphy and Wright. At bars, for example, guests are encouraged to “grab and go.” This means: get your drink and return to wherever you were sitting outside, away from people.

She said this protocol, in addition to being offered hand sanitizer, happened each time they entered a restaurant.

QR codes – barcodes you point your phone at to reveal information – have also replaced physical menus. It’s a popular method that eliminates touchpoints. 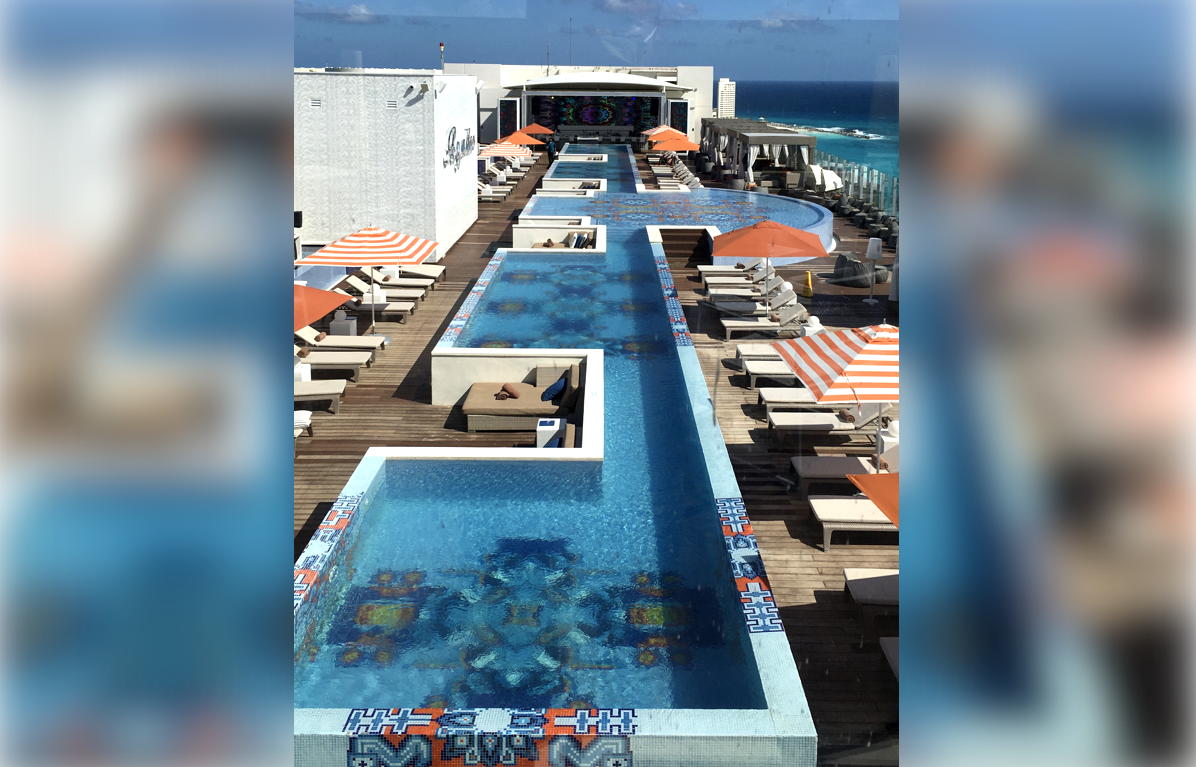 In some cases, some restaurants had a big chalkboard with a menu displayed, said Murphy.

“You take a picture of it when going in or they wheel it around,” she said.

Tables at restaurants, too, did not have centrepieces, which allowed for easy cleaning, the pair said.

One thing pandemic-era guests will notice is how all unnecessary items – such as decorative items, magazines and books – have been removed from the rooms. 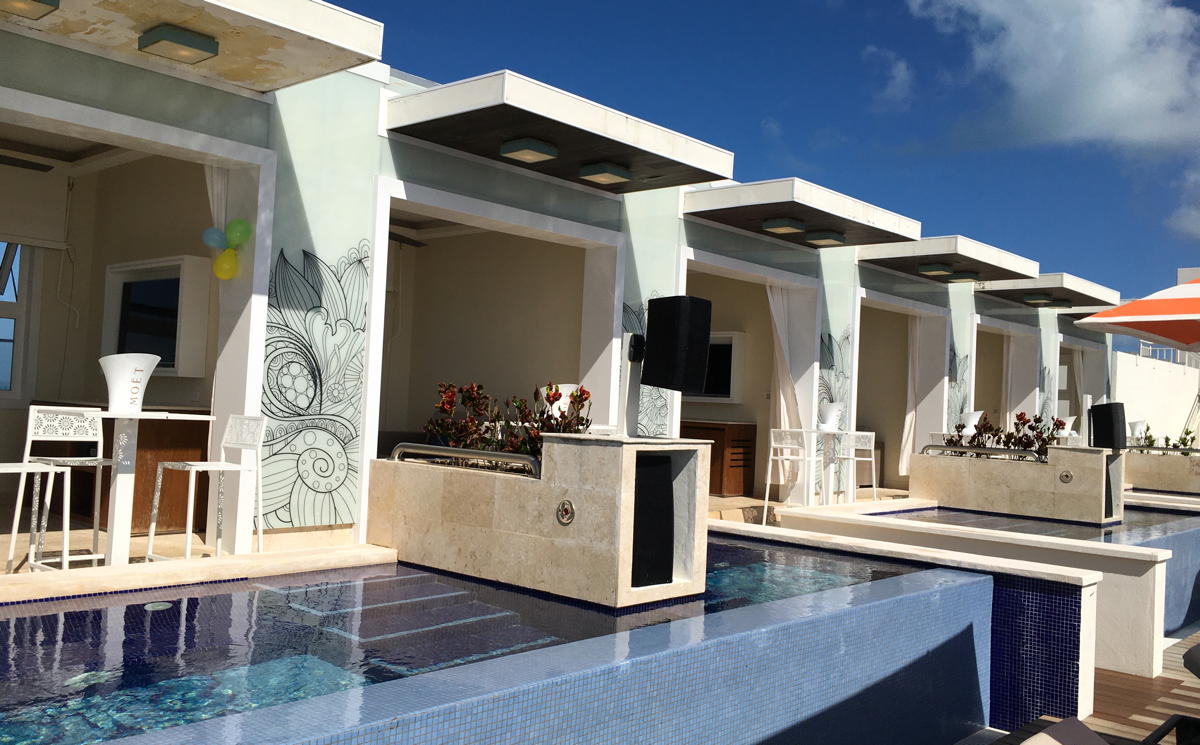 Royalton has implemented a 360˚ Clean Approach where common areas are cleaned hourly in addition to reducing restaurant capacity and other things.

Staff also limit how often they enter your space: “They’re just not going to come into the room,” said Murphy.

When it comes to travelling during the pandemic, Murphy advises travellers to pack a variety of comfortable masks.

“On travel day, you’re going to be in that mask for several hours – maybe eight to nine hours,” she said. “Buy masks that feel comfortable.”

Murphy inserted carbon filters into her mask for “extra security.” 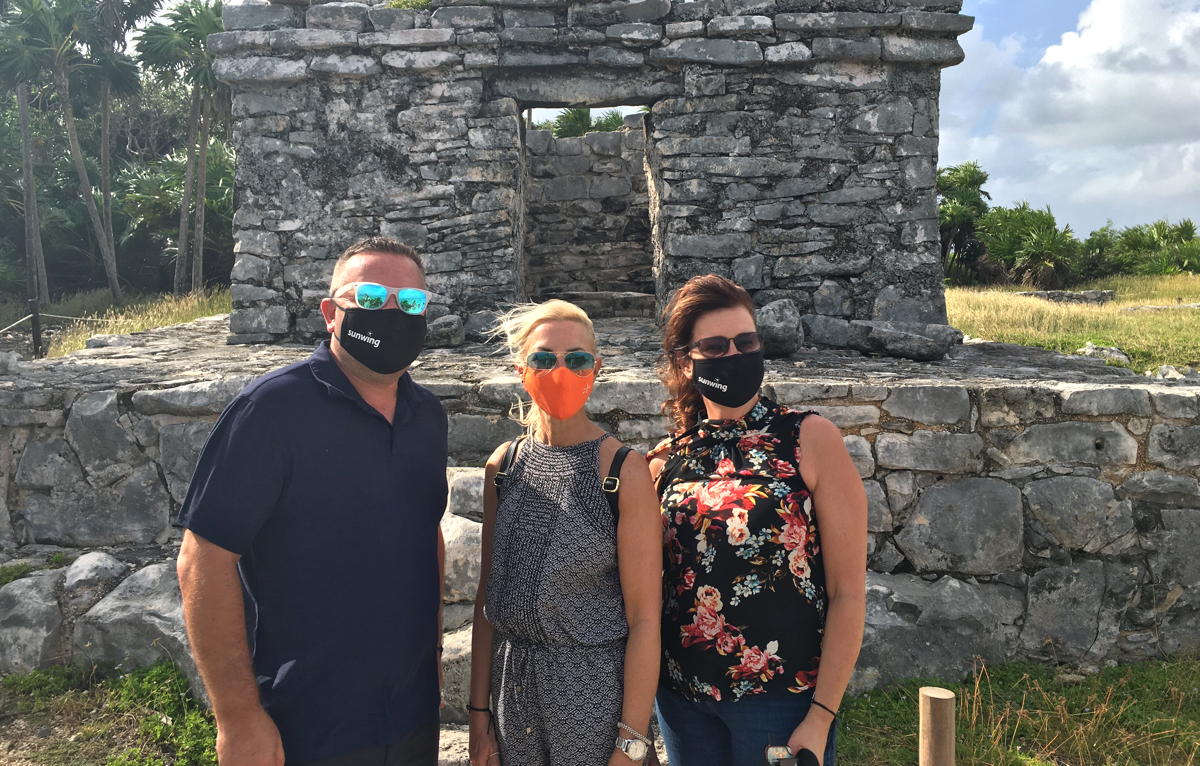 She even added a dab of lavender essential oil to the filters “so I had something nice to smell all day.”

“If you can’t wear a mask for long periods of time, it may be too soon for you to return to travel,” said Murphy. “You have to be willing to follow protocols.”

If you’re not used to wearing a mask for long periods of time, practice wearing one at home during the day (while working, for example), so you can get used it, suggested Wright.

“It will make that travel day a little bit easier,” he said.

While Canada’s 14-day quarantine order continues to deter many travellers, Sunwing is optimistic that more Canadians will start booking as the winter months roll in.

“We definitely need that quarantine lifted or modified,” said Murphy. “We’re hopeful that there’s going to be some progress with rapid testing so quarantine times can be reduced.”

The loads have been decent so far. Murphy and Wright said their flight from Toronto to Cancun was “pretty full.”

“We hope to add more destinations shortly,” said Murphy, hinting that Sunwing may extend service out of Edmonton soon. “There’s a few things coming along.”

Additionally: “A lot of people are using their Future Travel Credits [FTCs],” she said. 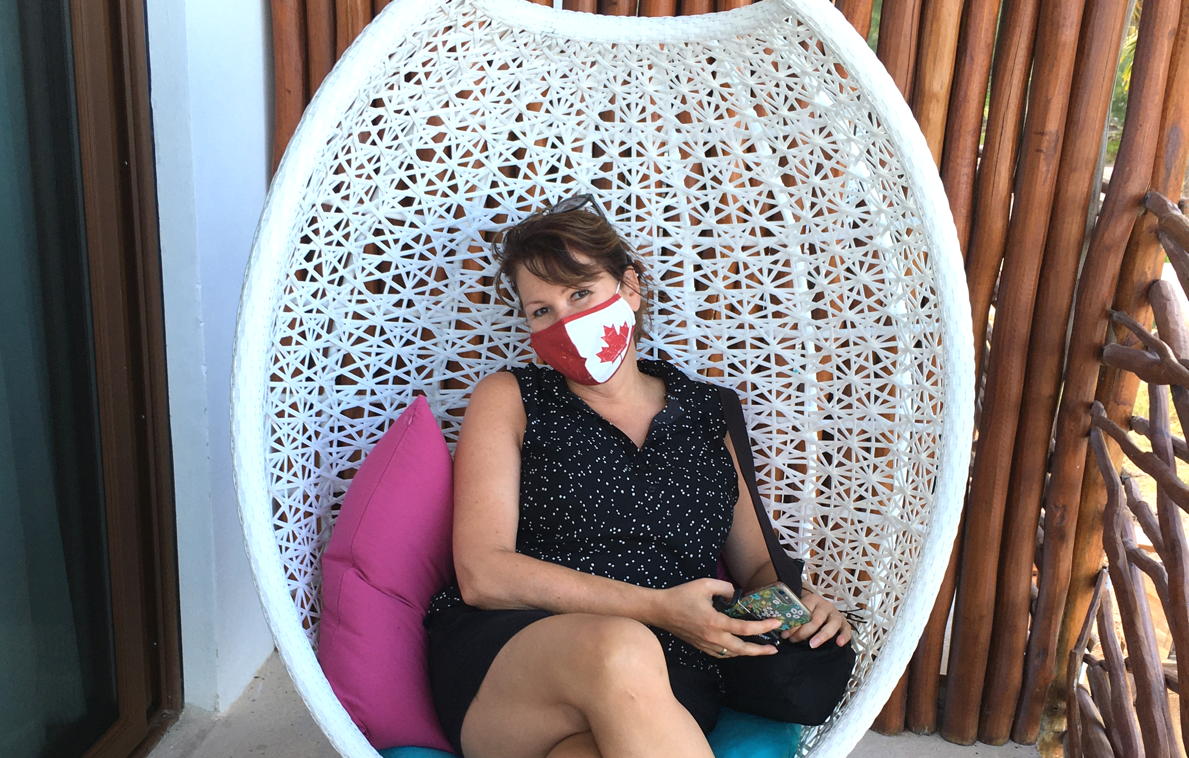 Sunwing’s FTCs still have a two-year expiry date and, at this point in time, that policy remains unchanged, said Murphy. “The situation is evolving. We’re always considering different options,” she said.

On the plus side, travellers are spending more than what their FTCs are worth, noted Murphy.

“There’s some additional commission being made,” she said.

Another trend? “We’re selling more two weekers than we have in decades,” said Murphy.

“We’re getting more requests for people to extend their stay once they’re in destination,” she said.

“If people are wanting to stay in destination longer, it means they’re having a great time,” said Murphy. “That’s a positive thing.”