Oztan, who has taken a small group of early arrivals on a city tour of eclectic, car-honking Istanbul – one day before the rest of a group flies in and the “real” G Adventures FAM begins – is explaining just how old Istanbul, an ancient city of more than 16 million people, and transcontinental Turkey, in general, really is.

She’s in her element, too. G Adventures’ CEOs – the Canadian tour operator’s term for tour leaders (who are not just guides, but also the heart and soul of the company for having a genuine passion for connecting travellers with the world) – are like walking Wikipedias. 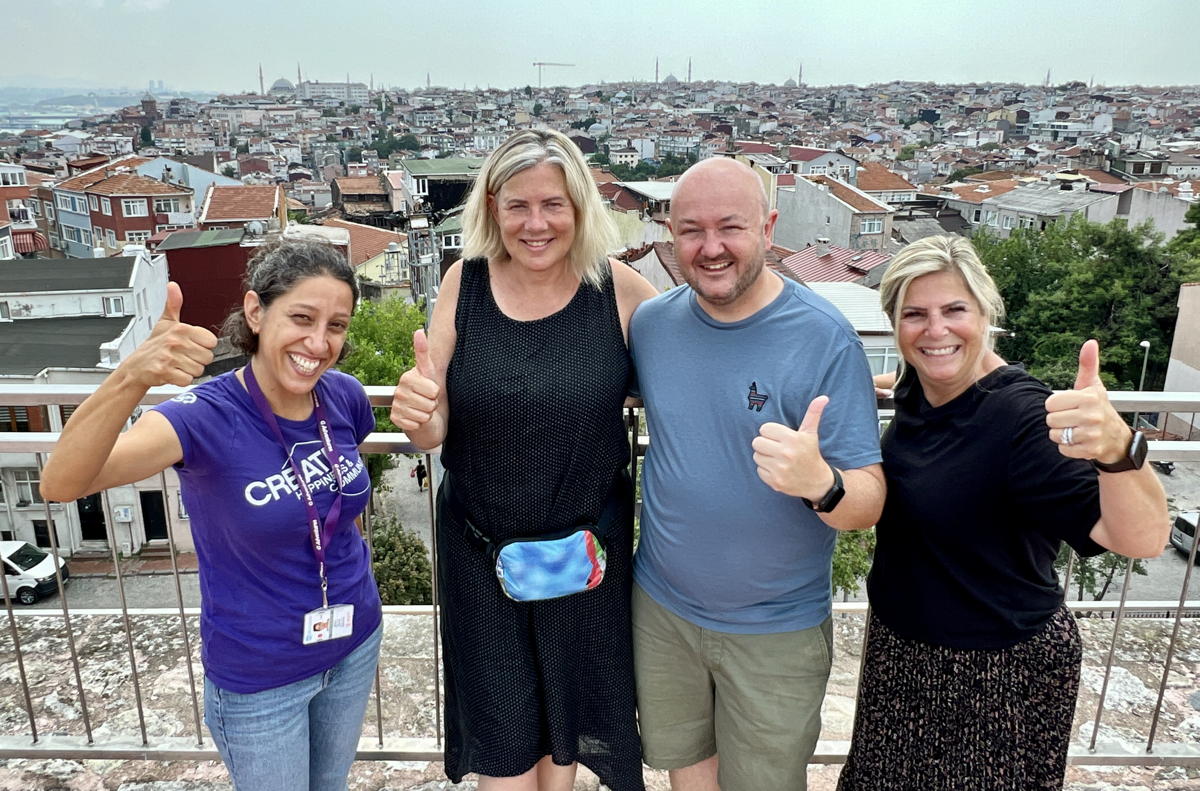 Pointing at mosques with dome-like minarets and innocent-eyed stray cats on the street (in Istanbul, there’s many), Oztan, wearing a deep purple t-shirt that reads “Create Happiness and Community,” has a story, explanation and answer for everything.

Like how waterfront Bulgarian St. Stephen Church, opened in 1898 – one of Istanbul’s newer structures – was delivered to the city in pieces and is known as the “Iron Church” because it’s made of steel and iron.

Or why friendly locals, at sunrise, are lugging around bags of fresh “bagels,” the real name being “simit,” a bread ring encrusted with sesame seeds.

It’s one of Turkey’s most famous street food snacks (in addition to corn on the cob and roasted chestnuts). 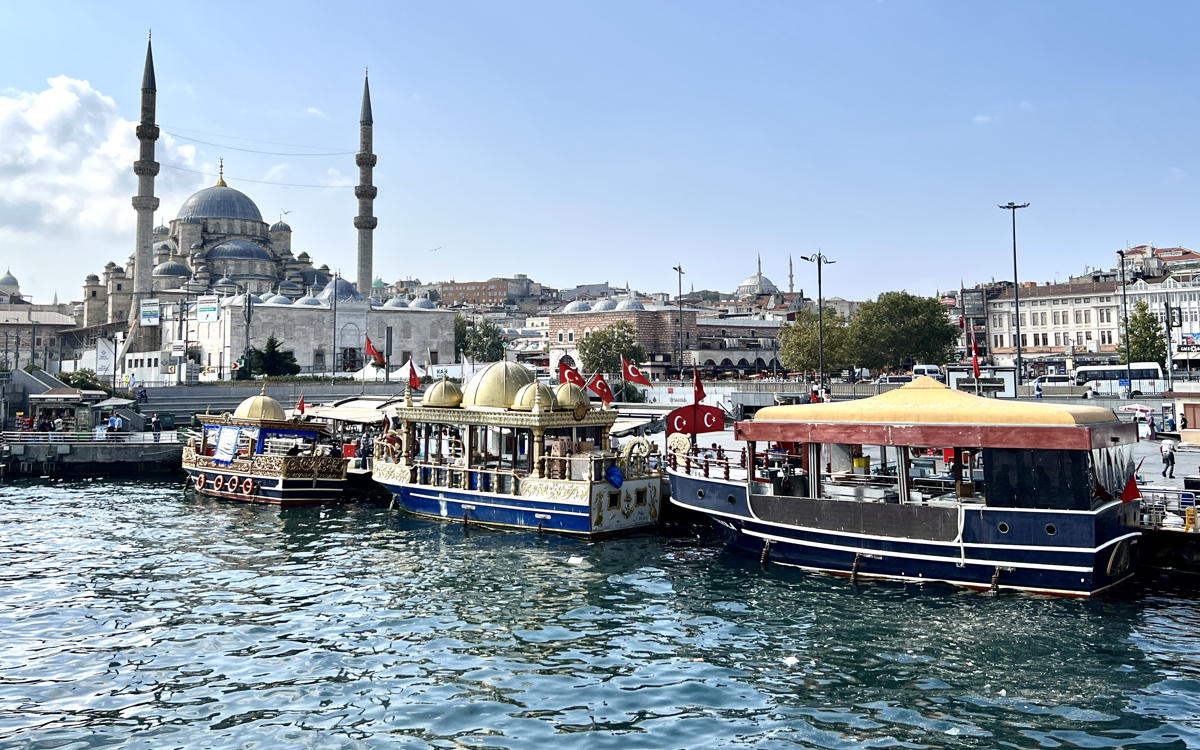 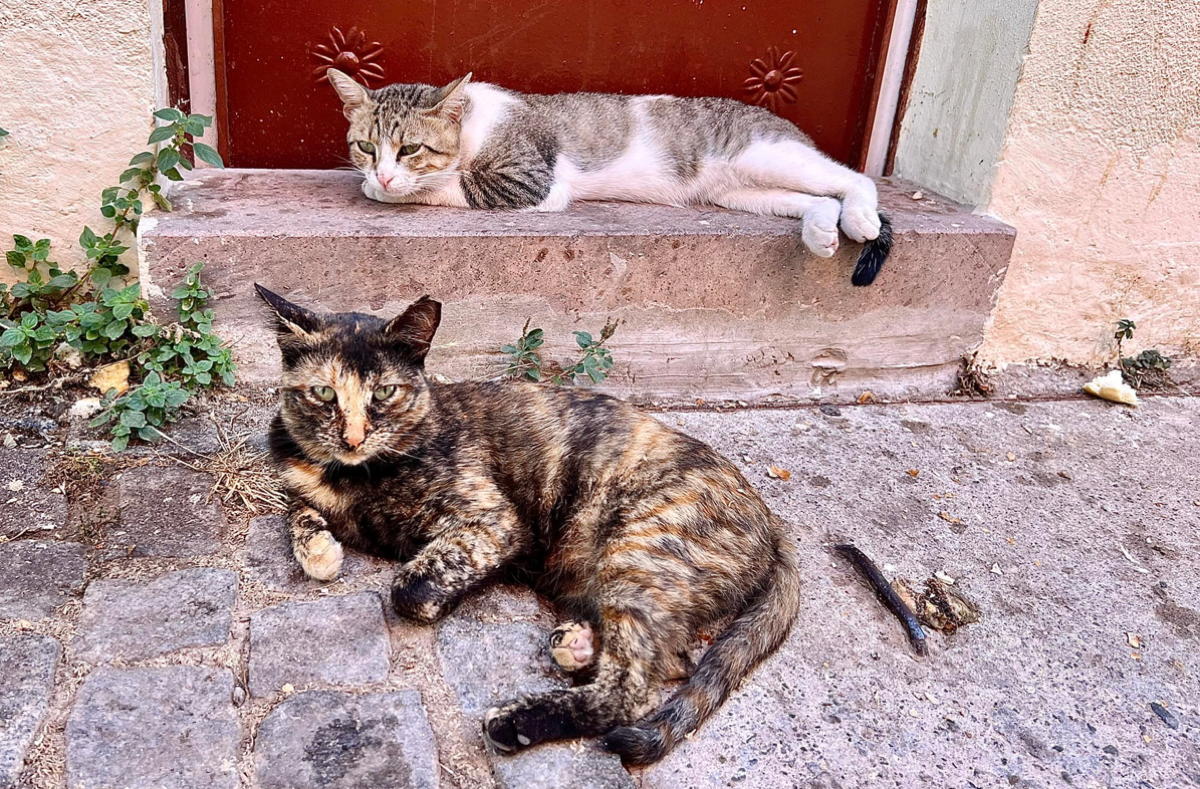 Or why the Eminönü quarter’s shop-filled Spice Bazaar – where one can find sweet pistachio baklava, chewy Turkish delights and glimmering jewelry – is also called the “Egyptian Bazaar” (it was built using revenues from the Ottoman eyalet of Egypt in 1660).

A lesson about vibrant Istanbul, which straddles both Europe and Asia, and greater Turkey, one of the earliest settlements in the world that shares borders with the Black, Mediterranean and Aegean seas, is a tale of epic proportions.

Built from the Roman, Byzantine and Ottoman empires that once ruled there, Turkey (officially the Republic of Türkiye), today, is a complex melting pot of backgrounds – a result of its location at the crossroads of the Middle East. 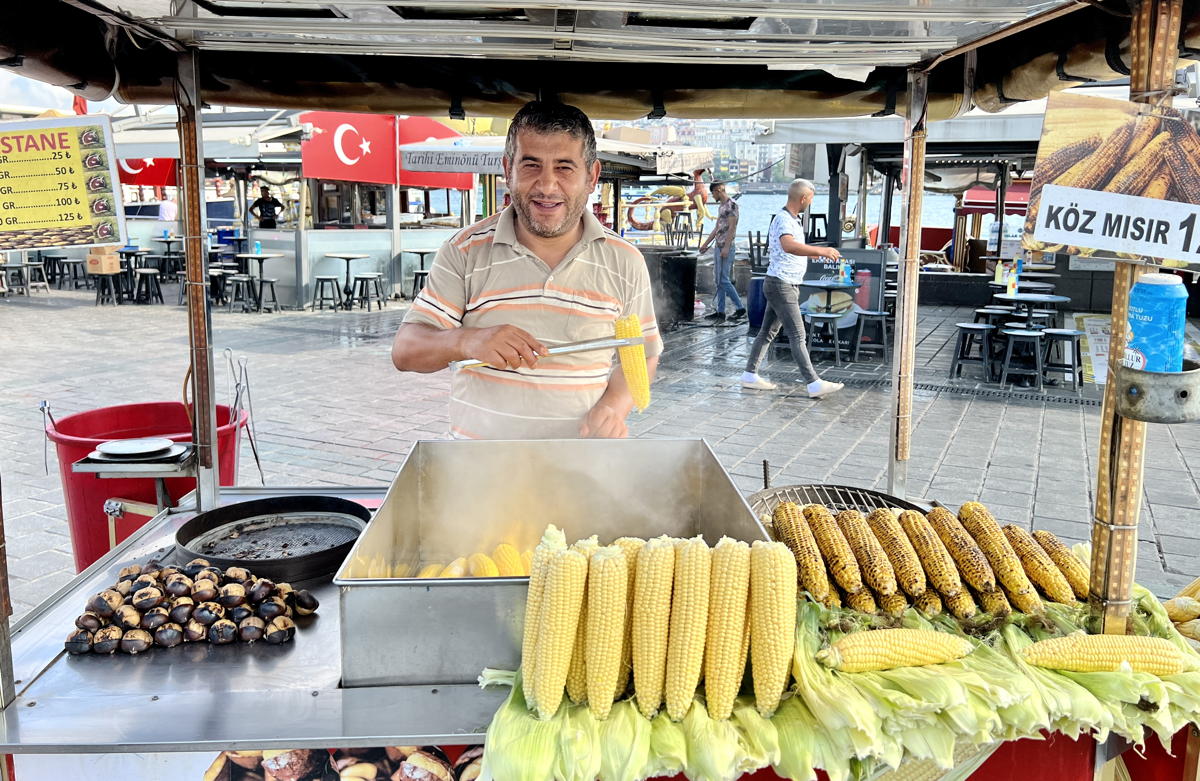 People in modern day Turkey can be of Armenian, Assyrian, Kurdish, Greek or Georgian descent, and in religious circles, there are Orthodox Christians, Jews and Muslims (the latter representing the majority).

You could spend a lifetime re-telling the plot of Turkey’s fascinating origins, but there’s something about the patient and kind-hearted way Oztan, with an educational background in international relations and politics, makes understanding the country an exciting and accessible experience.

Her smile begins every tour before she does. 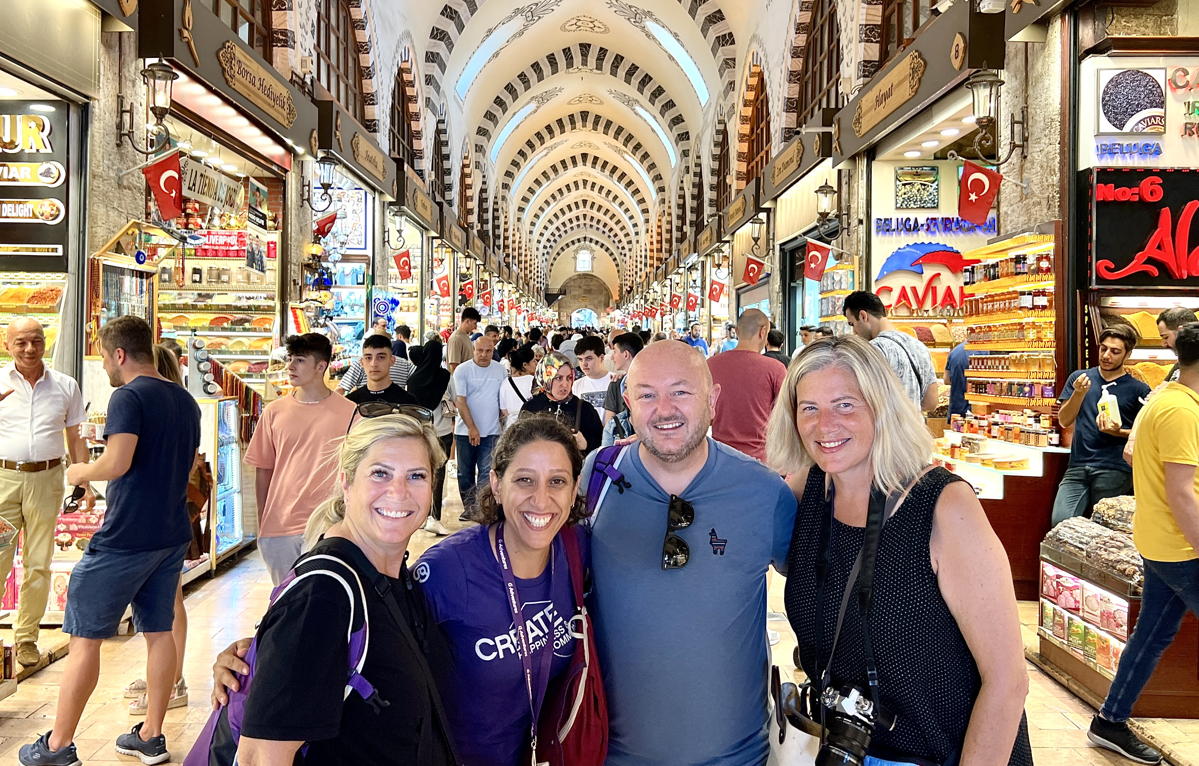 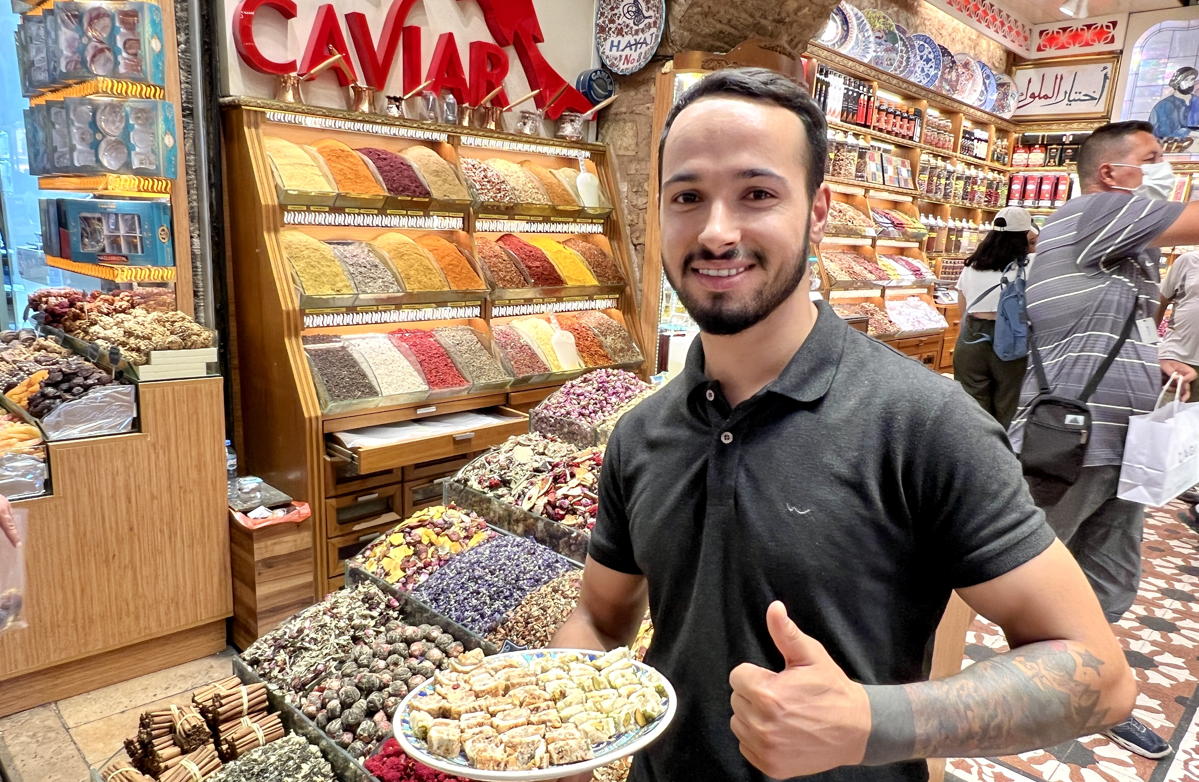 “We’re in the middle of eastern and western civilization. You’ll always see something different. Everything is richer here,” Oztan told PAX on Sunday (Aug. 14), the first night of G Adventures’ “Best of Turkey” tour, which we are covering, exclusively, on location alongside a keen group of Canadian travel advisors who applied for, and secured, a spot on the immersive trip, which runs until Aug. 21.

This week, agents have been exploring bazaars, archeological sites and tea houses, one Turkish pancake at a time, on an eight-day itinerary designed for travellers who are short on time, but want to experience as much scenery and history as possible. 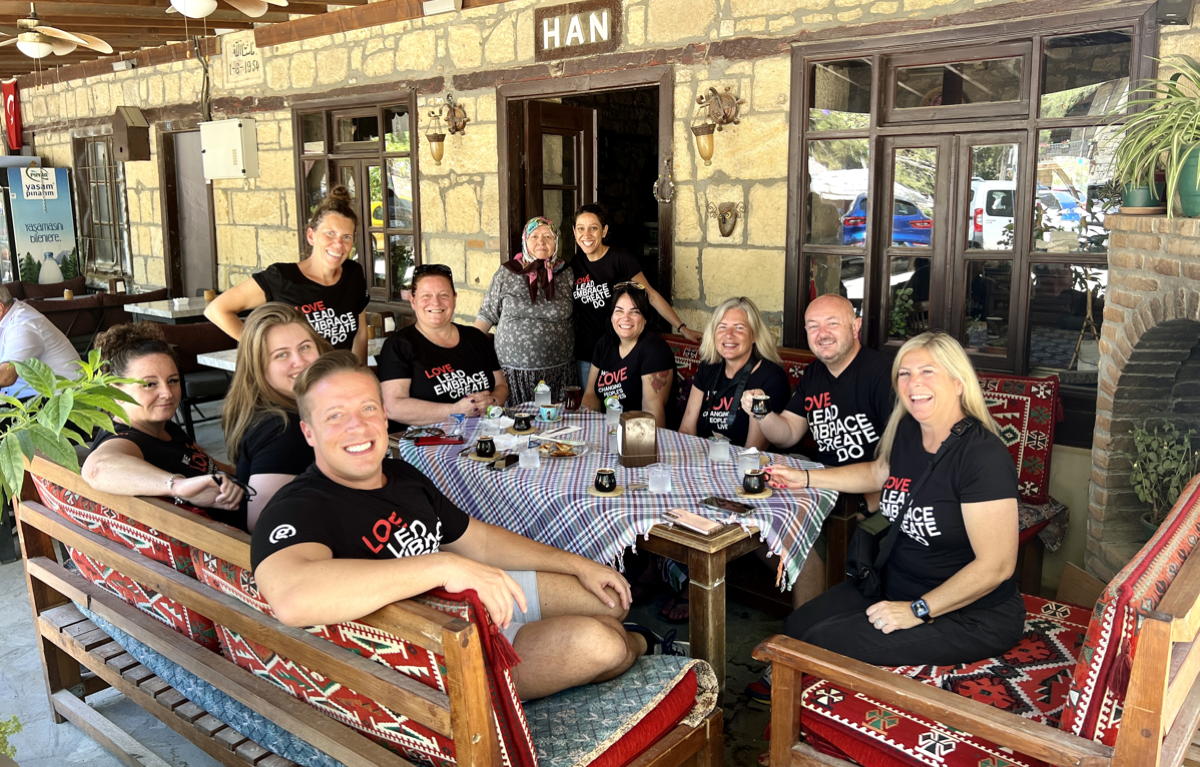 Off the beaten path Turkey

But this week, it’s a jam-packed land, sea and sky adventure, full of “I can’t believe we did that moments.”

From a cross-continental boat cruise on the Bosphorus Strait out of Istanbul (Turkey’s largest city) to the WWI battlefields of Gallipoli to the ruins of Troy (where it’s said the first chapter of pre-historic archeology was written) to the ancient streets of Ephesus to the white-cliff pools of Pamukkale. 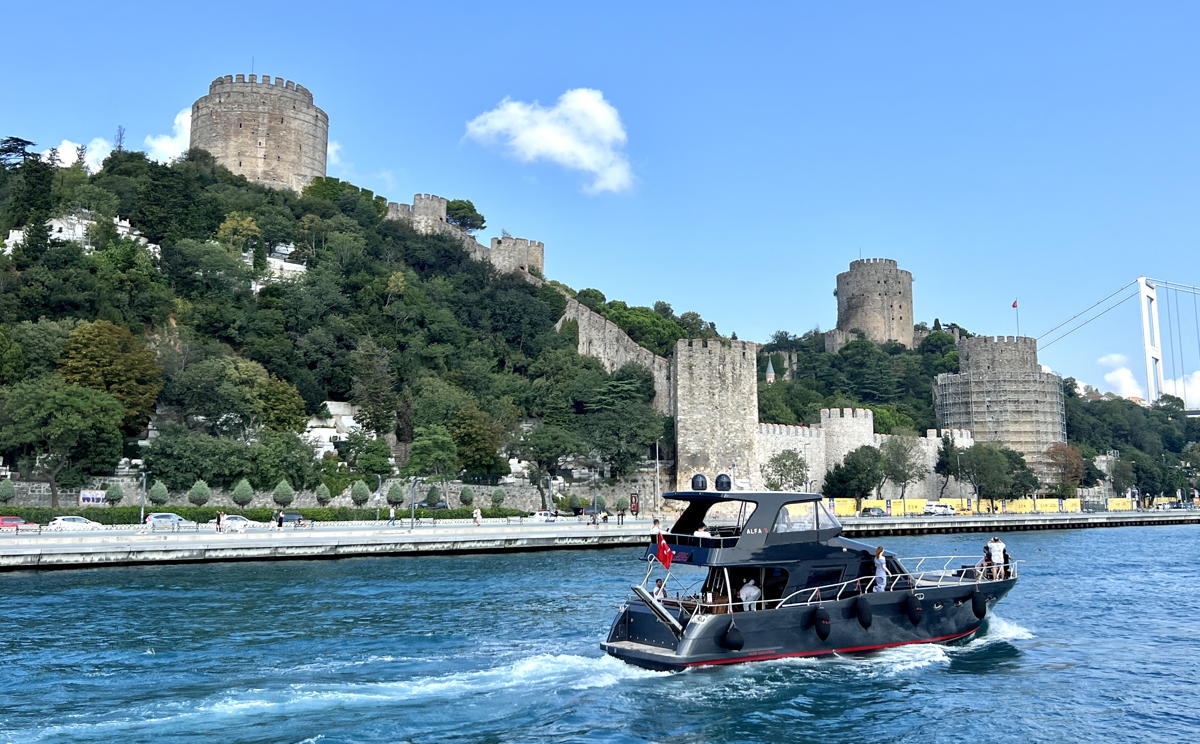 And many traditional villages and local restaurants in between – regional gems that average country-checking travellers would likely not find on their own.

Turkey, says David Green, managing director for Canada and vice-president of global and customer operations at G Adventures, is part of a batch of countries, linked to Europe, that are seeing heightened interest as global tourism reopens from the COVID-19 pandemic.

“A lot of people know G Adventures for South and Central America and Asia,” said Green, who is on the FAM this week. “During the pandemic, we saw a market shift and Europe saw a huge uplift.” 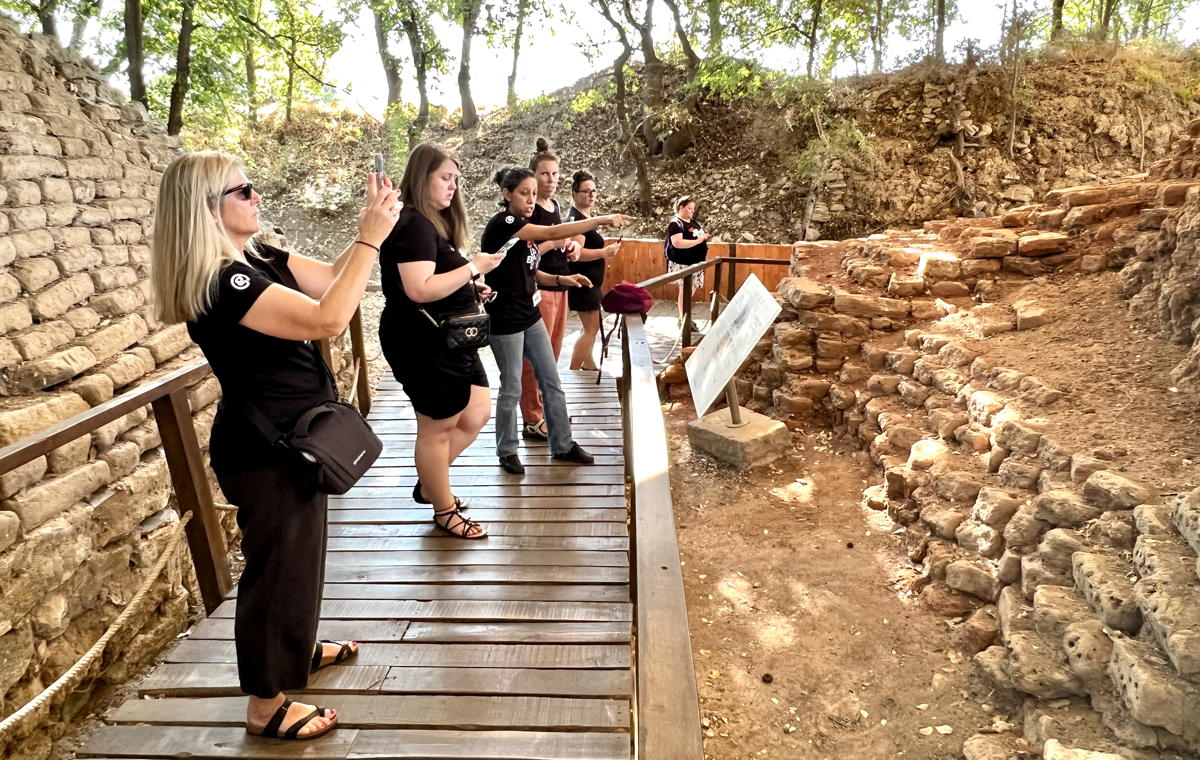 This week’s trip is one of four FAMs that G Adventures has organized for travel advisors this year (Jordan, Ecuador and Portugal were the other trips).

It’s part of a 2022 strategy aimed at giving back to the trade community by offering travel advisors an opportunity to experience a G Adventures tour for themselves. 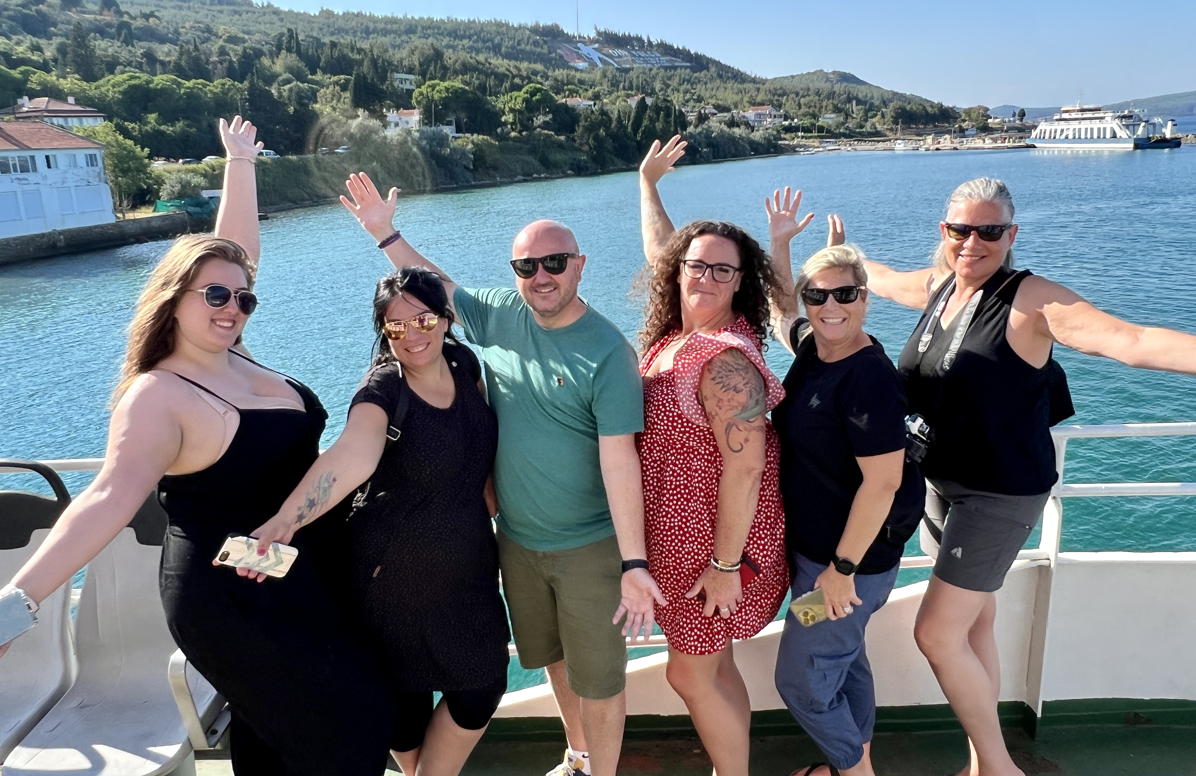 This week, in Turkey, there’s a good balance of participants.

Some agents on the FAM sell a lot of G (but have never personally been on a trip), whereas others are new to the industry, are fans of the brand, and are getting an on-the-ground look at what the company can do.

“The common thread is that they love G adventures, they want to sell us, and they want to learn so they can sell it to their clients,” Green said. 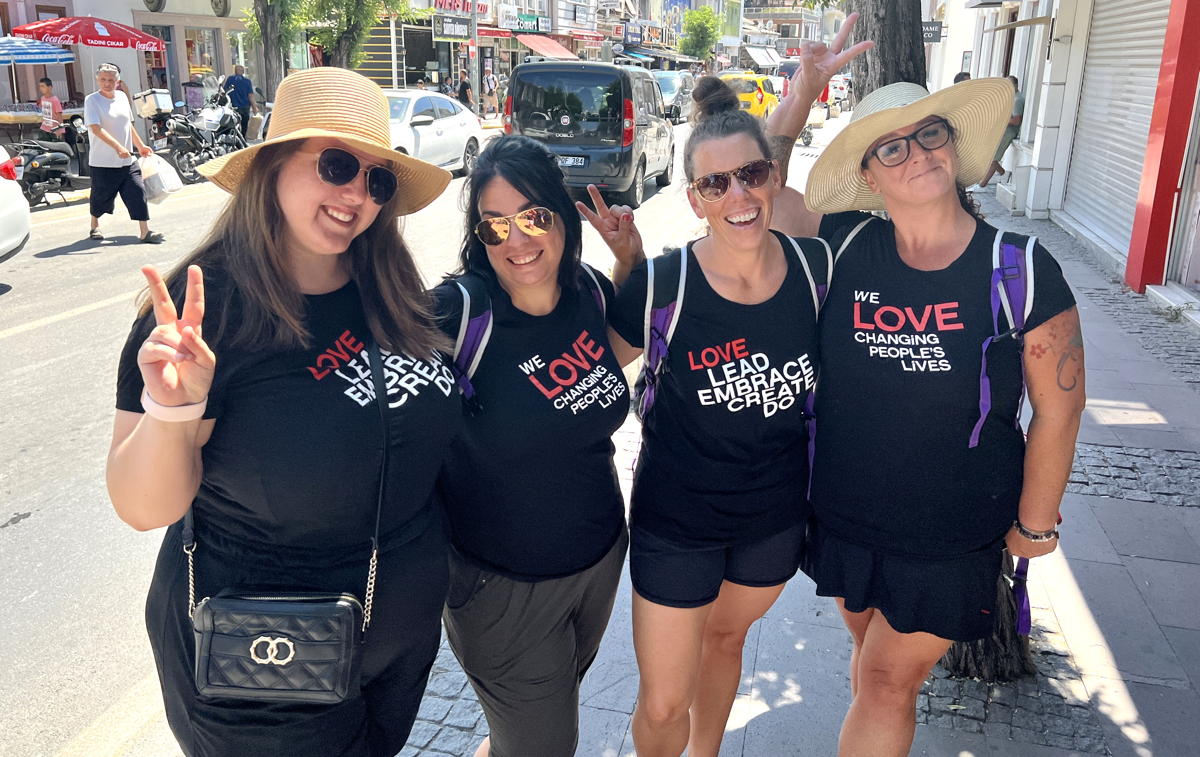 There's also something to be said about the "magic" of getting travel advisors together on a trip.

As Green explained, agents will naturally share some of the obstacles they face in the business "and start problem solving."

Case in point: during the trip's orientation session on Day 1, one agent was explaining how they'd like to introduce their older clients to G Adventures (the company, for the record, caters to people of all ages).

In that moment, other agents in the group immediately jumped and started sharing ideas on how to overcome that challenge.

"You get a group of agents together, even if they're competitors, who have a love of travel, and love G, and there’s something magic that happens," Green said. "You start as 12 strangers and you leave as 12 friends." 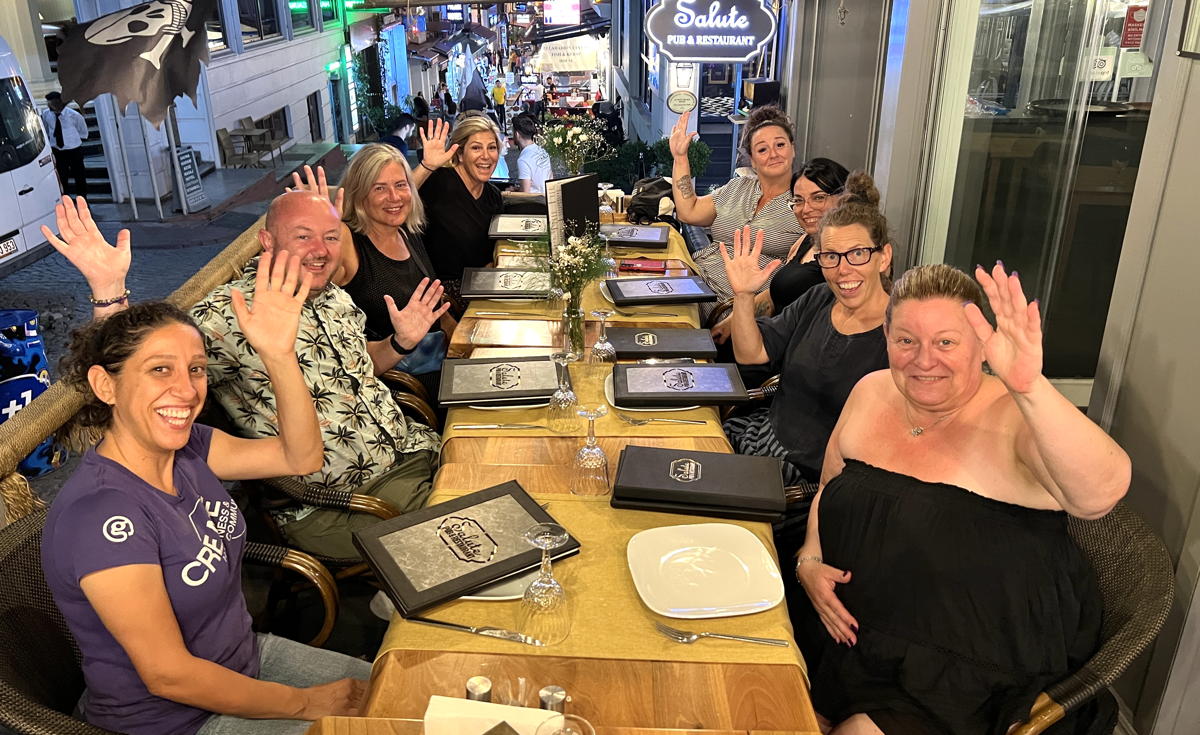 The company, for one, conducts its tours in small groups (the average size is 12 to 16 people) and promotes a culture of freedom and flexibility.

Customers can make lifetime deposits, in case travel plans change, and there’s no pressure to participate in everything on the itinerary. 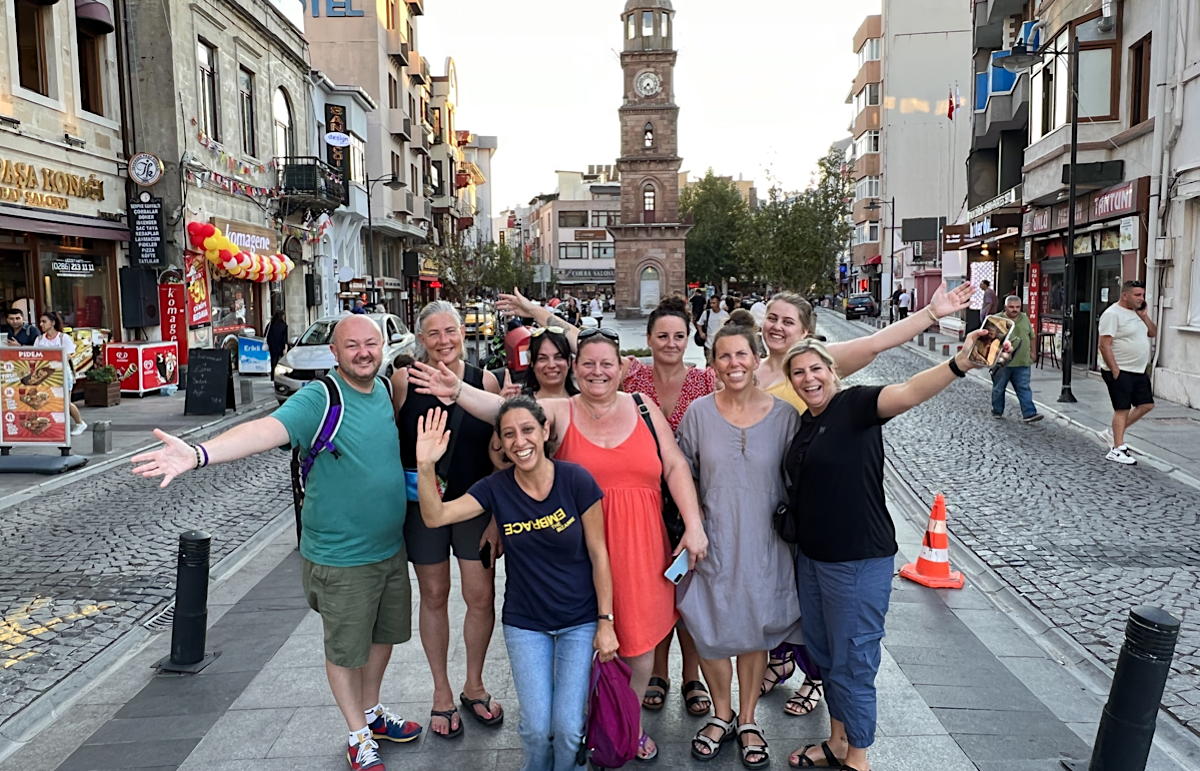 If a traveller, for instance, wants to dine at a local restaurant on their own, as opposed to with the group, they’re welcome to. (Although most end up sticking with the group due to the friendships that are formed).

There’s also some flexibility during tours. It hasn’t been unusual for Gonca, our CEO, to orchestrate in-the-moment plans on the ground.

Do we visit the carpet-making shop? Should we explore the spice market later in the day when it’s busier? Should we go sailing in the Aegean Sea? Do we want to eat dinner at 6 p.m. or 8 p.m.? 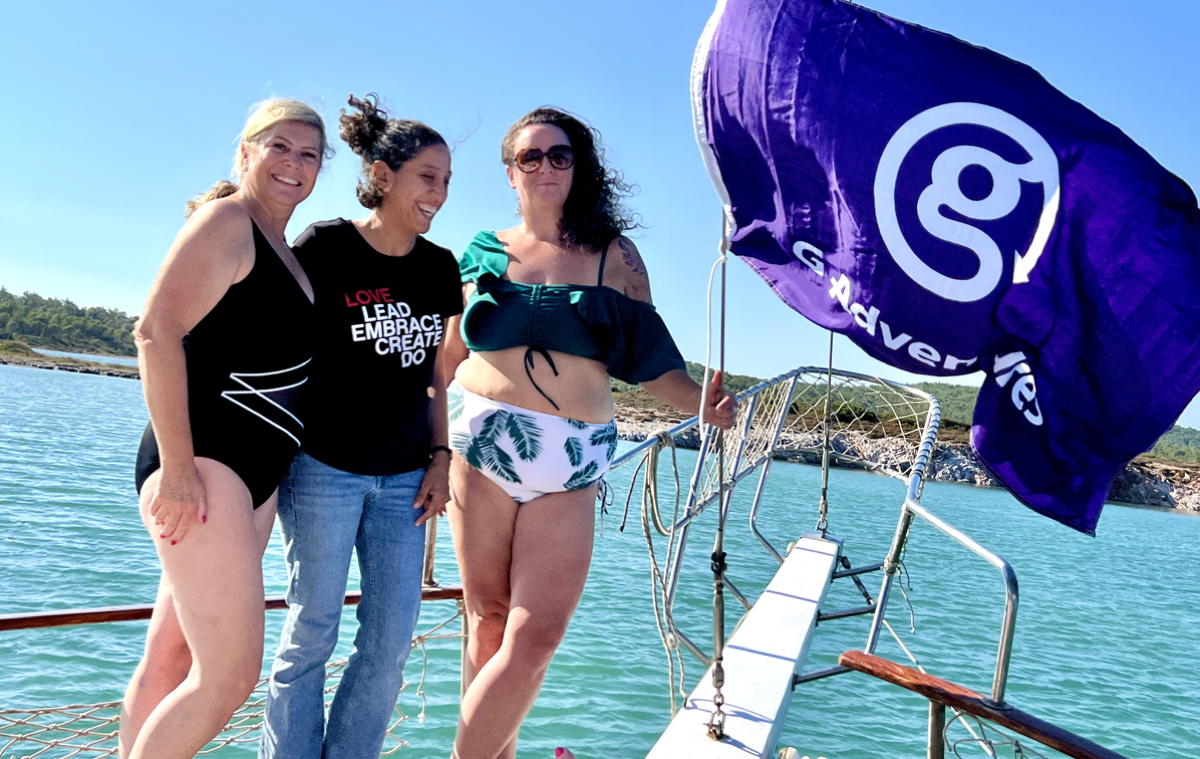 It's really up to the travellers in the group. CEOs, as the local eyes and ears, are armed with a rolodex full of tried and tested recommendations. Which adds a lot.

“I wanted it to be with G because I believe in them. It’s the way I want to travel,” Tuckey told PAX. 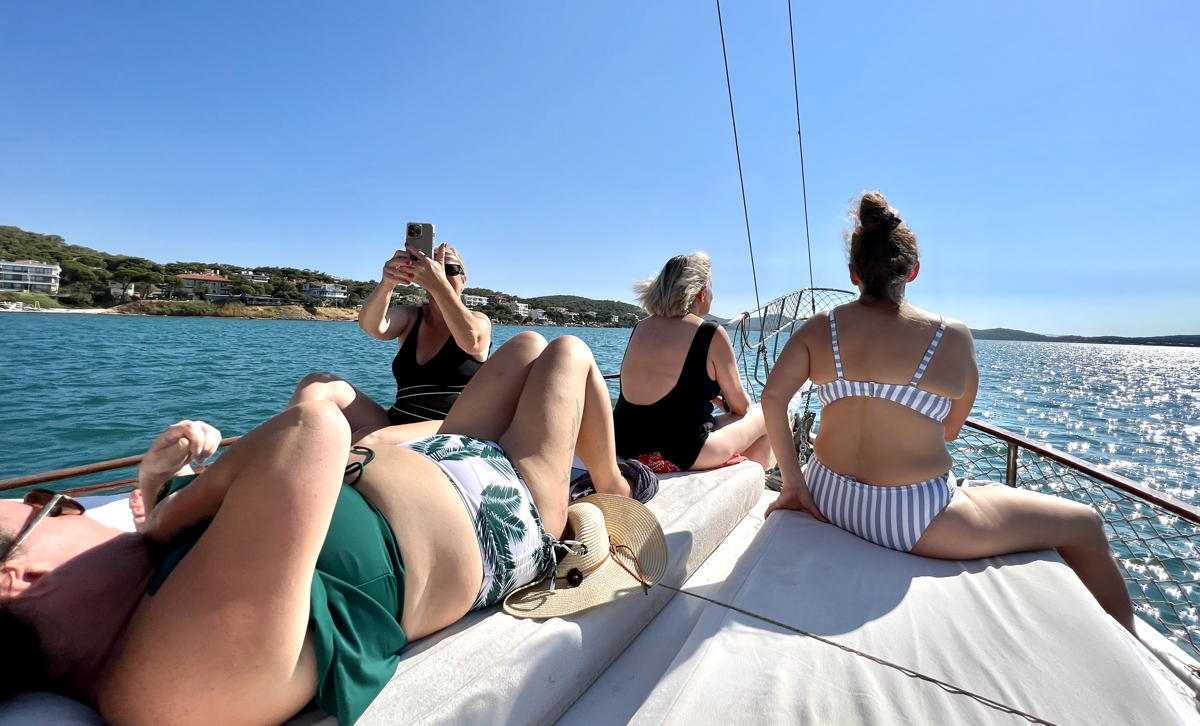 Guided by the belief that travel can be the greatest form of wealth distribution in the world, G Adventures is a leader in community tourism, dedicated to ensuring that its tours provide a direct economic benefit to destinations.

The company uses a “Ripple Score” to show customers (and travel agents) the percentage of money it spends locally on trip services, like accommodations, restaurants, and transportation.

The tool aims to provide transparency around the economic impact of a G experience (it does not reflect the quality of the actual trip), and a score of 100 means that all of the services G used to create a specific tour are locally owned. 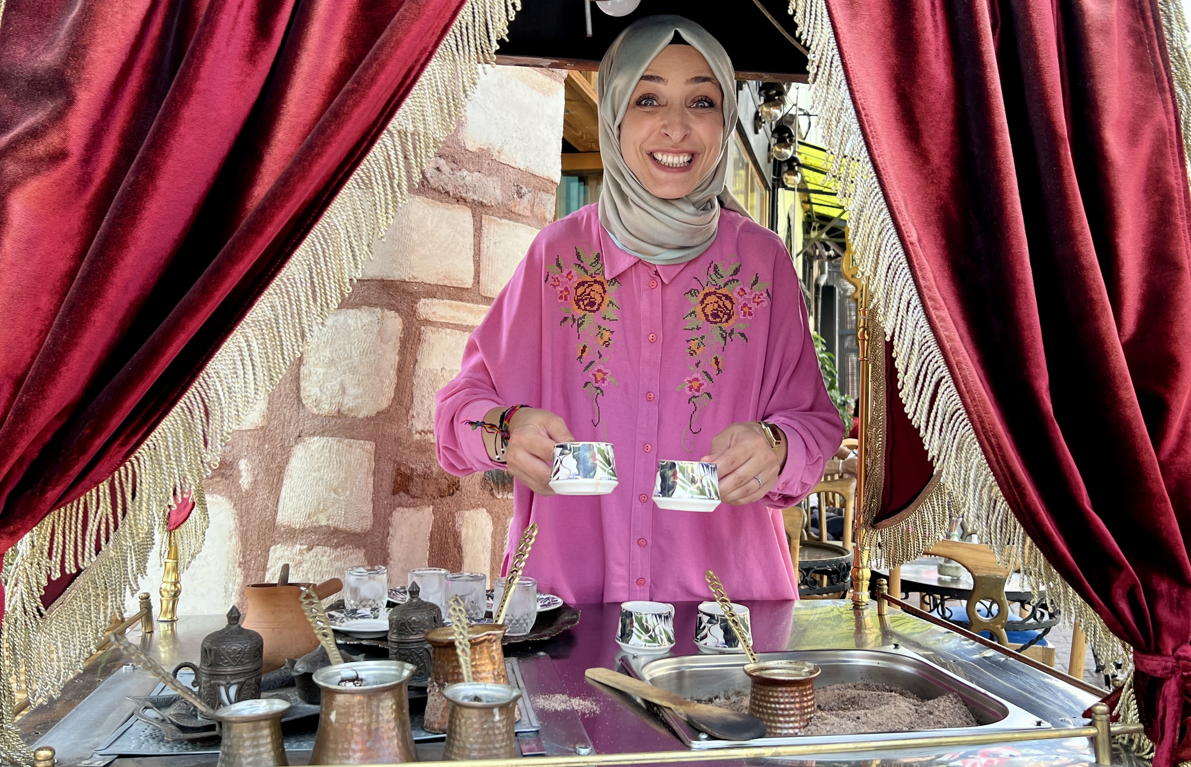 G’s “Best of Turkey” itinerary, for example, has a Ripple Score of 100.

Adding to this mission is G Adventures’ non-for-profit foundation Planeterra, which aims to empower and support communities through tourism.

According to Planeterra, tourism is an $8 trillion global industry, yet many local businesses and communities do not see any economic benefit.

The foundation works to break this cycle by investing in local enterprises, ensuring partners have access to support and mentorship, while securing a connection to tourism.

Çöp means “garbage” in Turkish and “madam” is the same as the French word for “female.” 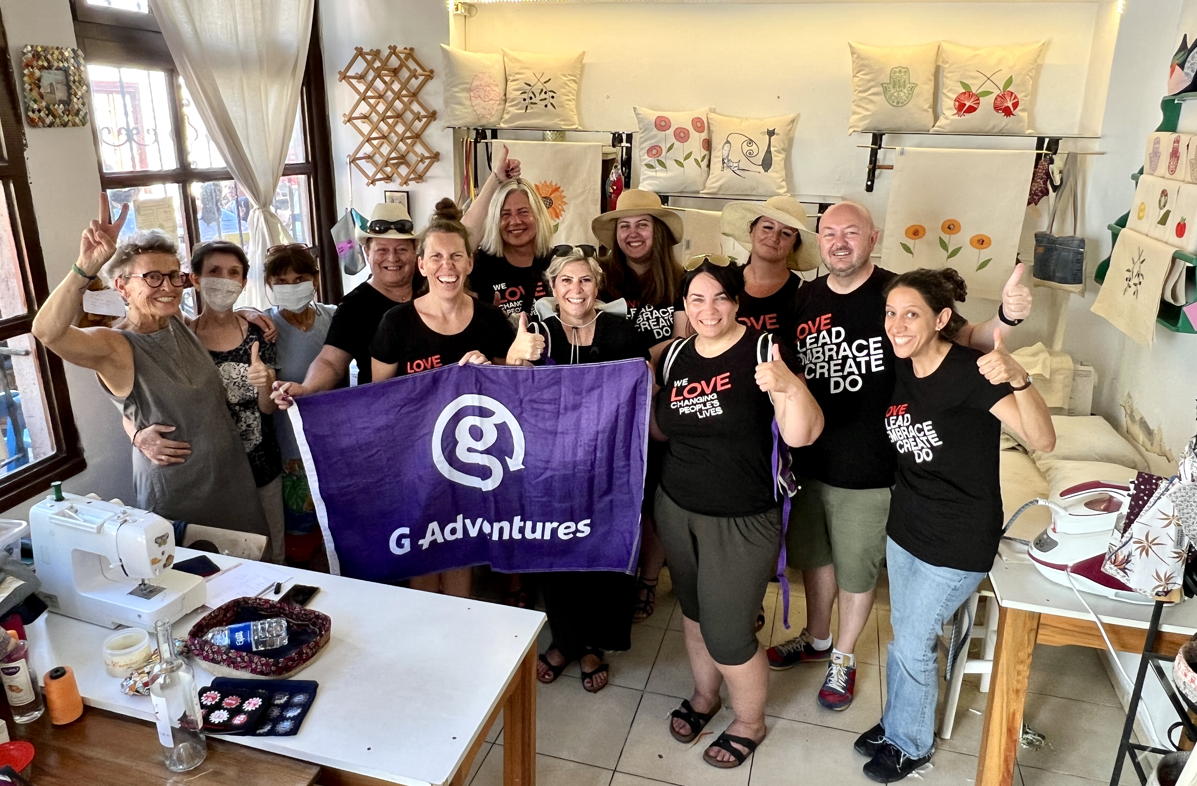 So Çöp(m)adam literally means “garbage ladies,” but it’s symbolic of taking garbage and turning it into something fashionable and fun.

G Adventures helps Çöp(m)adam expand its customer base by bringing guests to the store’s workshop on its Turkey trips, and travellers who purchase the products directly support the women that made them.

Offering purses to wine bags to cushion covers, the store, today, employs roughly 30 women, directly benefitting up to 120 people in the community.

This is tourism for good, and while customers may not initially book a G Adventures trip with the intention of wanting to give back, those who end up visiting a Planeterra project always consider it a highlight, Green said.

“That’s what they talk about,” Green said. “It’s the experience they didn’t know they needed in their lives.” 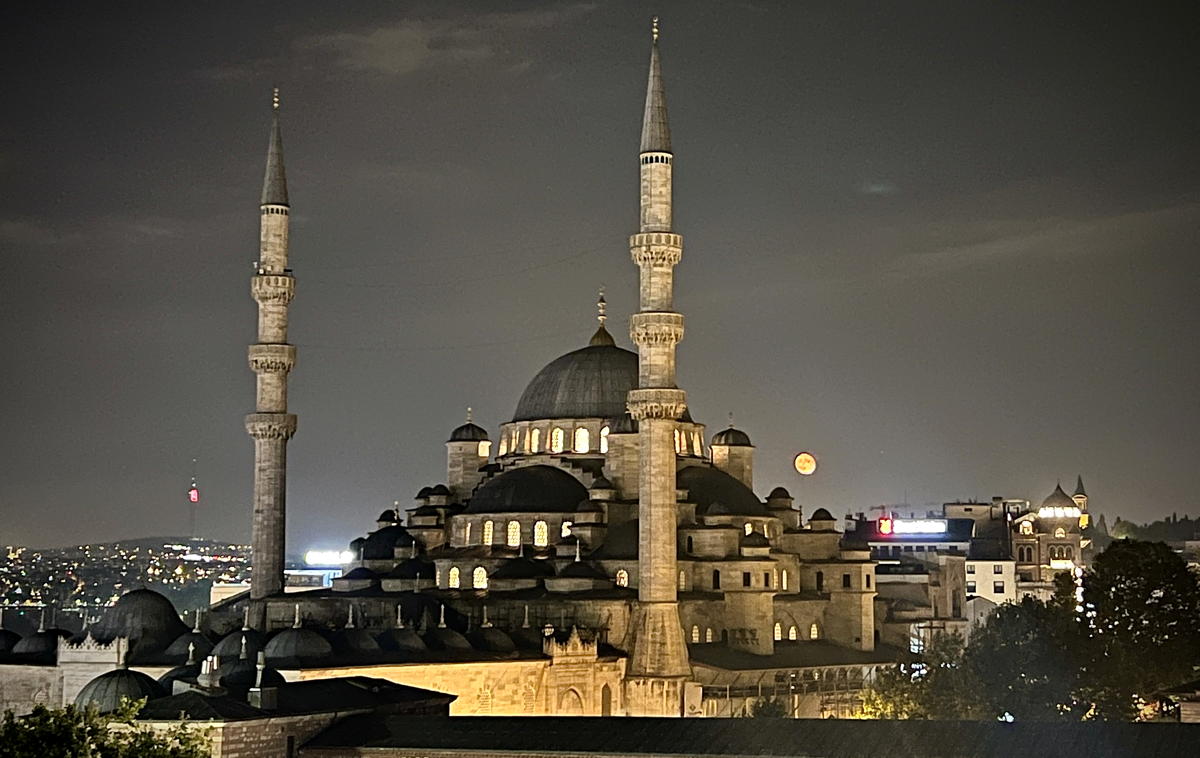 G’s dedication to supporting communities is the main reason why our CEO, Gonca, joined the company eight years ago.

After years of tourism challenges, she’s just happy that Canadian travel advisors are in Turkey to help build tourism – a task that hasn’t been fully pursued at the government level.

“I’m very thankful to G Adventures for promoting Turkey on the global stage. We really need it here,” she said.