The newly-identified Omicron COVID-19 variant triggered a wave of fresh travel restrictions over the weekend as the world responded to what Tulio de Oliveira, director of South Africa's Centre for Epidemic Response and Innovation, has called a “worrisome” mutation of the coronavirus.

South Africa's health ministry, in a media briefing on Nov. 25, announced the detection of a new SARS-CoV-2 variant, B.1.1.529, that is outpacing the Delta (B1617.2) variant with mutations that might change how the virus interacts.

The World Health Organization (WHO) has since flagged it as a "variant of concern.” Preliminary evidence suggests an increased risk of reinfection with this variant, the WHO said in a statement, with infections increasing “steeply” in “almost all” provinces in South Africa.

According to the WHO, officials in South Africa reported the variant on Nov. 24, with the first confirmed case coming from a specimen collected on Nov. 9.

More research is needed, however, and the WHO says it could take "days to several weeks" to understand the level of severity of Omicron.

Still, late last week and into the weekend, countries around the world rushed to halt the spread of the new variant with heightened border measures.

Canada, alongside the United States and the European Union, has imposed a fresh travel ban prohibiting entry by foreign nationals from several countries in southern Africa, where the virus was first identified by researchers.

As a “precautionary measure,” until Jan. 31, 2022, Ottawa has implemented enhanced quarantine and testing measures for all travellers who have been in the Southern Africa region — including South Africa, Eswatini, Lesotho, Botswana, Zimbabwe, Mozambique, and Namibia— within the last 14 days before arriving in Canada.

In addition: foreign nationals who have travelled in any of these countries within the previous 14 days will not be permitted entry into Canada.

“These new measures are being put in place out of an abundance of caution,” said Minister of Health Jean-Yves Duclos in a statement last week.

Elsewhere, Japan, Israel and Morocco are already slamming the travel doors shut as all three countries have announced plans to restrict foreign travel.

As a precaution, Japan will close its borders to foreigners from Tuesday (Nov. 30), Prime Minister Fumio Kishida told reporters. (Japan has been closed to tourists since early on in the pandemic, allowing short-term business travellers and international students to enter just recently).

"These are temporary, exceptional measures that we are taking for safety's sake until there is clearer information about the Omicron variant," Kishida said, according to reports.

Israel's blanket ban took effect from midnight on Sunday (Nov. 28) after the country reopened to vaccinated tourists just weeks ago.

Morocco, on Sunday, said it would deny entry to all travellers, even Moroccan citizens, for two weeks beginning Monday, the New York Times reported. The country is reportedly banning all incoming and outgoing flights over the two-week period.

Australia is also being careful, delaying its plans to reopen its borders to international students, skilled migrants and travellers from Japan and South Korea to Dec. 15.

The U.K., on Saturday, also re-implemented the need for a PCR test from all arrivals from abroad on day two, with self-isolation until a negative test is reported.

On Nov. 28, Canada's Chief Public Health Officer Dr. Theresa Tam announced on Twitter that cases of the Omicron variant had been confirmed in Ontario.

“The #PHAC National Microbiology Laboratory is working closely with provinces and territories, and continues to monitor #COVID19 cases in Canada through ongoing analysis of national genomic databases,” Dr. Tam wrote on social media.

The positive cases are linked to two people from Ottawa who returned from a trip to Nigeria, Ontario health officials said Sunday. 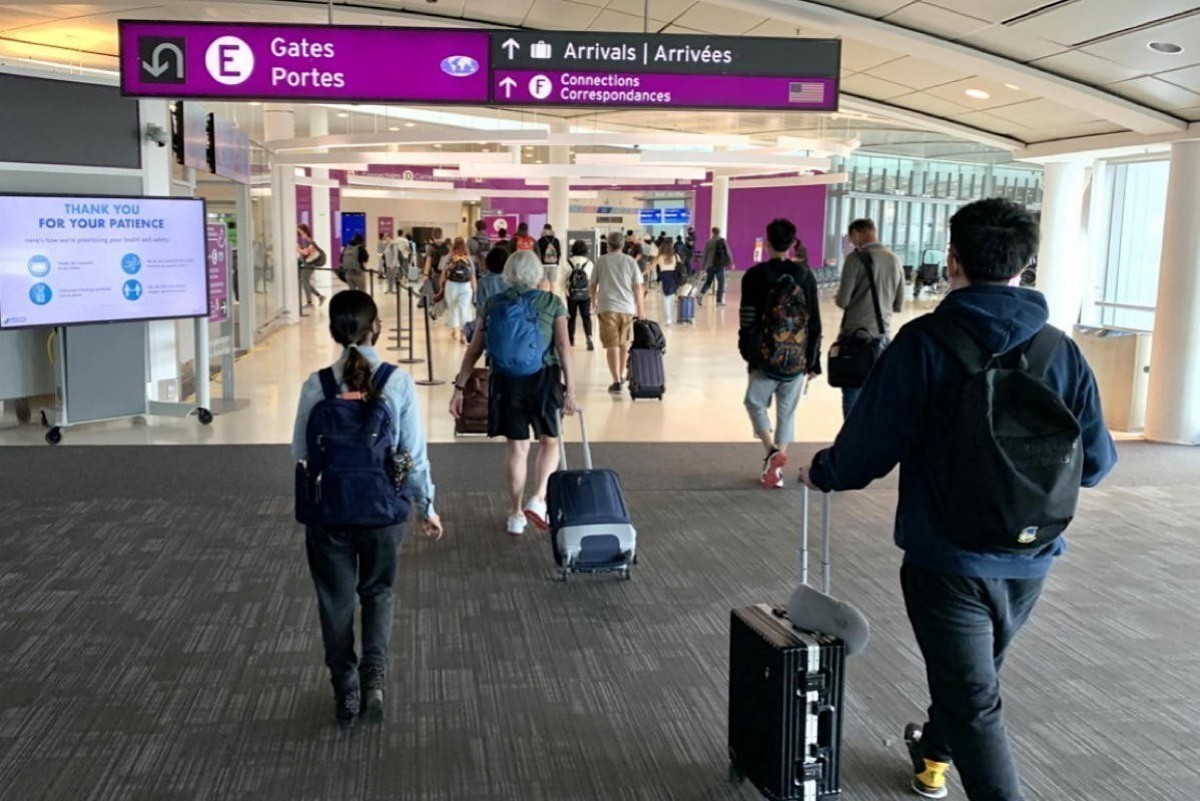 "Ontario is prepared and ready to respond to this new variant," the statement reads.

"The Ontario COVID-19 Genomic Network is continuing to actively monitor for all potential variants circulating in the province, including the Omicron variant, and is conducting genomic sequencing on 100 per cent of eligible COVID-19 positive samples."

"I think it's fair to say that this variant probably emerged weeks or even months ago. And by the time you start identifying it, it's usually pretty widespread, especially for a very contagious respiratory viral infection like this," Bogoch said.

Governments are "causing fear among the traveling public"

"We are deeply disappointed by the decision of several countries to prohibit travel,” President Cyril Ramaphosa said in a speech on Sunday.

As reported by the BBC, President Ramaphosa said there was no scientific basis for the travel bans and that southern Africa was the victim of unfair discrimination.

The bans would not be effective in preventing the spread of the variant, he argued.

"The only thing the prohibition on travel will do is to further damage the economies of the affected countries and undermine their ability to respond to, and recover from, the pandemic," he said.

The WHO, on Monday, called for an international accord to help prevent and fight future pandemics as scientists continue to decipher the threat posed by the Omicron variant.

"As quickly as possible we must use the experience of the last two years to move to a coordinated data-driven approach that finds safe alternatives to border closures and quarantine," Walsh said. "Travel restrictions are not a long-term solution to control COVID variants."