Cdn visits to U.S. will fall by 5.2 million trips this summer: Conference Board of Canada

“We were projecting a fairly good year for the U.S.,” said Jennifer Hendry, a senior researcher for the Conference Board of Canada on Wednesday (May 20th).

Then things started to change. And not for the better.

Speaking to some 50 industry pros over Zoom as part of virtual gathering organized by Discover America Canada, Hendry shared new and revealing statistics on Canadian outbound travel to the United States, illustrating how 2020, in fact, started off rather strong.

In January and February, for example, Canadian outbound travel to the U.S. “saw an uptick,” Hendry told attendees. “There were almost 3 million overnight trips to the U.S. in the first two months.”

Interestingly, during that same winter period, overnight auto trips increased by 5 per cent – a first statistic of its kind, Hendry noted.

However, when the World Health Organization (WHO) declared COVID-19 a global pandemic, prompting a ban on non-essential travel, border closures and government-imposed restrictions, transborder traffic (for obvious reasons) plummeted to unprecedented levels.

“We never thought it would get to this depth of change,” Hendry said. “Nothing in history compares.”

“This event will be much, much worse than anything seen in the past,” she said. 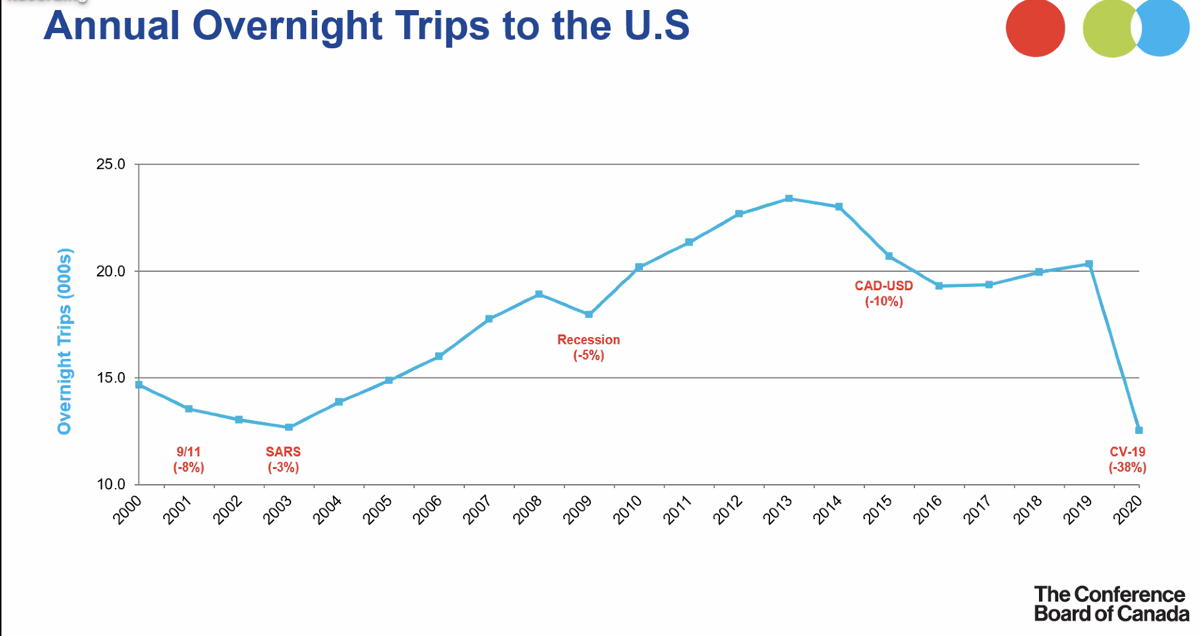 Normally, the second quarter sees about five million Canadian visitors to the U.S., Hendry said, with a little more than half travelling by car.

According to stats provided by The Canada Border Services Agency (CBSA), there was a 45% drop in border crossings in March (the month when non-essential travel was banned) and a 95% reduction in April (proving that the restrictions have worked).

This week, Prime Minister Justin Trudeau announced a 30-day extension on the Canada-U.S. border closure, moving the deadline to June 21st (which Hendry suspects will “probably be longer.”) 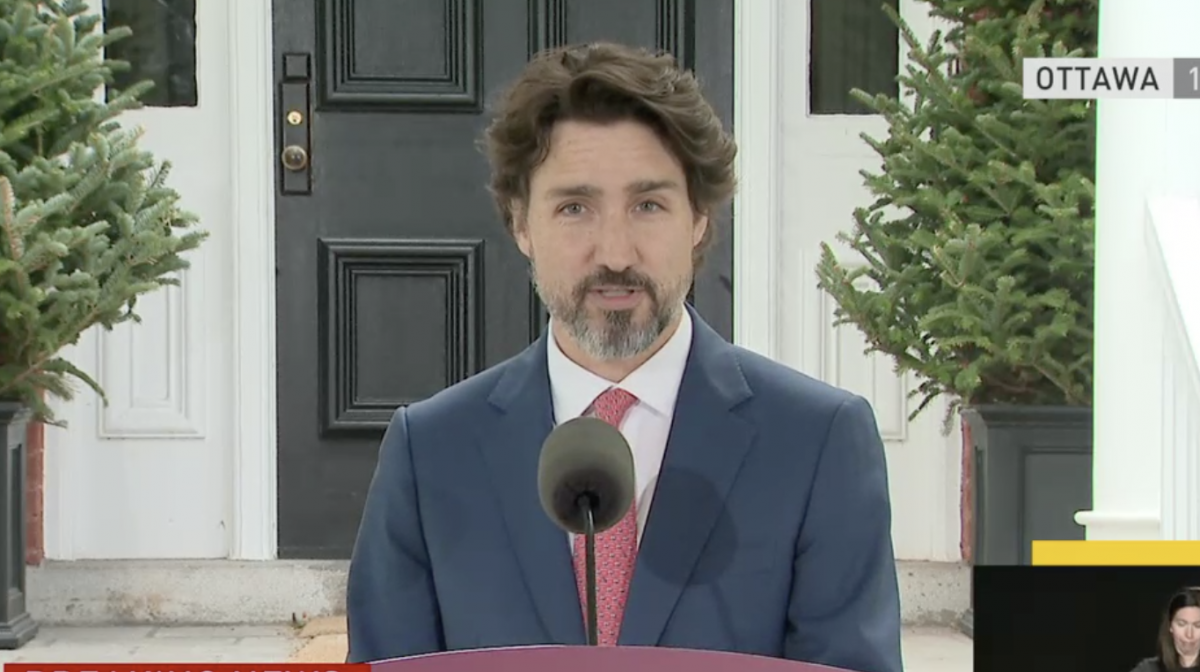 The grim outlook, naturally, extends to air traffic as well.

As a result, in April and May alone, Canadian carriers reduced their transborder service by 2.2 million seats, representing a 96% drop compared to last year, the Conference Board of Canada reports.

How will Canadians travel this summer?

On March 20th, the Conference Board of Canada asked 2,000 Canadians who had upcoming travel planned if they had delayed or cancelled one or more trips, and 58% said they had.

That number rose to 73% when the survey asked the same question, one month later, in April.

Under normal circumstances, some 75-80% of Canadians would report booking an overnight leisure trip (to anywhere) at the beginning of summer.

This year, that portion has dropped to just 45%, Hendry said, and of that group, the majority are planning a trip within Canada.

Even Hendry calls this outlook optimistic, stressing the importance of recognizing “the when, the where and the why” in the equation.

The number of travellers that are actually planning to leave Canada this summer is very low, data shows.

Border and travel restrictions, of course, need to be lifted first if anyone plans on going anywhere this summer.

About half of auto trips and 60% of non-auto trips take place during the summer months in a normal year, research shows.

“With no ability to actually get to their destination, this season is expected to see a decline of about half of normal activity,” Hendry said.

Even when flights return and borders re-open, “a return to normal is not anticipated,” she said. 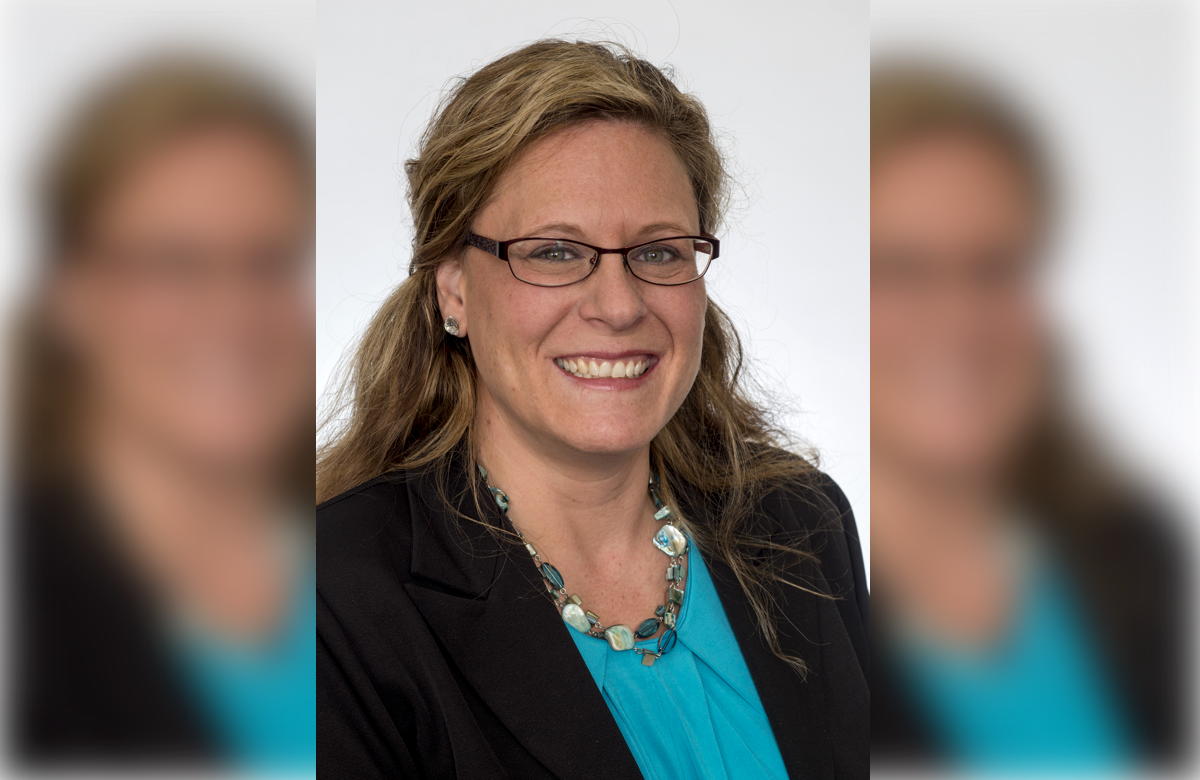 Travelling by car will happen first, Hendry explained, which speaks to “a need for individuals to control their personal environment.”

More Canadians, for instance, will reportedly opt for staying in a private residence (either rented or owned) as opposed to a hotel.

“This outbreak might prompt the return of the great Canadian [or transborder] road trip,” Hendry noted.

While some unknowns remain, there will still be a demand for travel, Hendry added.

In exchange, travellers will expect businesses to intensify their cleaning and sanitization methods and avoid places with large crowd gatherings.

But Canadians may be limited by what their bank accounts allow as many have experienced a loss of income throughout the pandemic.

“People may be looking at how they’re going to be paying their bills, not thinking about their next vacation,” Hendry suggested.

All things considered, the Conference Board of Canada expects outbound travel to drop by 46% this summer (assuming there will be some activity in the latter half of the season).

With forms of physical distancing expected to remain in place this year, and with very little transborder movement expected until at least July, the number of Canadian visits to the U.S. will fall by 5.2 million trips this summer, Hendry said.

“Yes, a negative outlook overall, but even in some circles, considered somewhat optimistic,” she said, noting some global signs of recovery, from “travel bubbles” in Asia to the re-opening of tourism in countries such as Italy and Spain.

Still, the Canadian outbound market (overall) is not expected to return to normal until late next year, Hendry said.

As for what U.S. destinations will thrive when travel does return, Hendry suggested that it may be up to local citizens to make that call.

“Destinations will have an upper hand if they can prove their locals are open to having visitors back in their communities again,” she said.

Hendry’s data shows that younger generations are less concerned about their own health and many will not let it drive their trip-planning decisions.

To that end, she suspected health would be a factor among older demographics (ie: snowbirds) when that group is faced with the decision to cross the Canada-U.S. border.

“[For snowbirds], it’s going to be an issue of their own health and medical coverage that they have,” she said.