The opening of Sandals Royal Curaçao is a full circle moment for the Stewart family.

The late founder and chairman of Sandals and Beaches Resorts, Gordon ‘Butch’ Stewart, who sadly passed away in January 2021, got his start in sales at the Dutch-owned Curaçao Trading Company in the late 1960s, more than a decade before he would venture into hotels and create the Sandals brand in 1981.

That year was also when one of Gordon’s sons, Adam, was born. Following his father’s passing, Adam Stewart assumed the role of Executive Chairman of Sandals Resorts International after working alongside his father for more than two decades, learning the ropes.

Sandals Royal Curaçao, the 16th property in the Sandals portfolio, and the company’s first venture into the Dutch Caribbean island, is not only a nod to Gordon “Butch” Stewart’s beginnings, but also a symbol of what’s to come in the next five to ten years for the Caribbean super brand.

“My father is not here tonight, but his finger prints are all over this development,” Adam Stewart told guests Friday night (June 24) at a sexy grand opening party for Sandals Royal Curaçao, where PAX has been reporting on location since last Thursday. 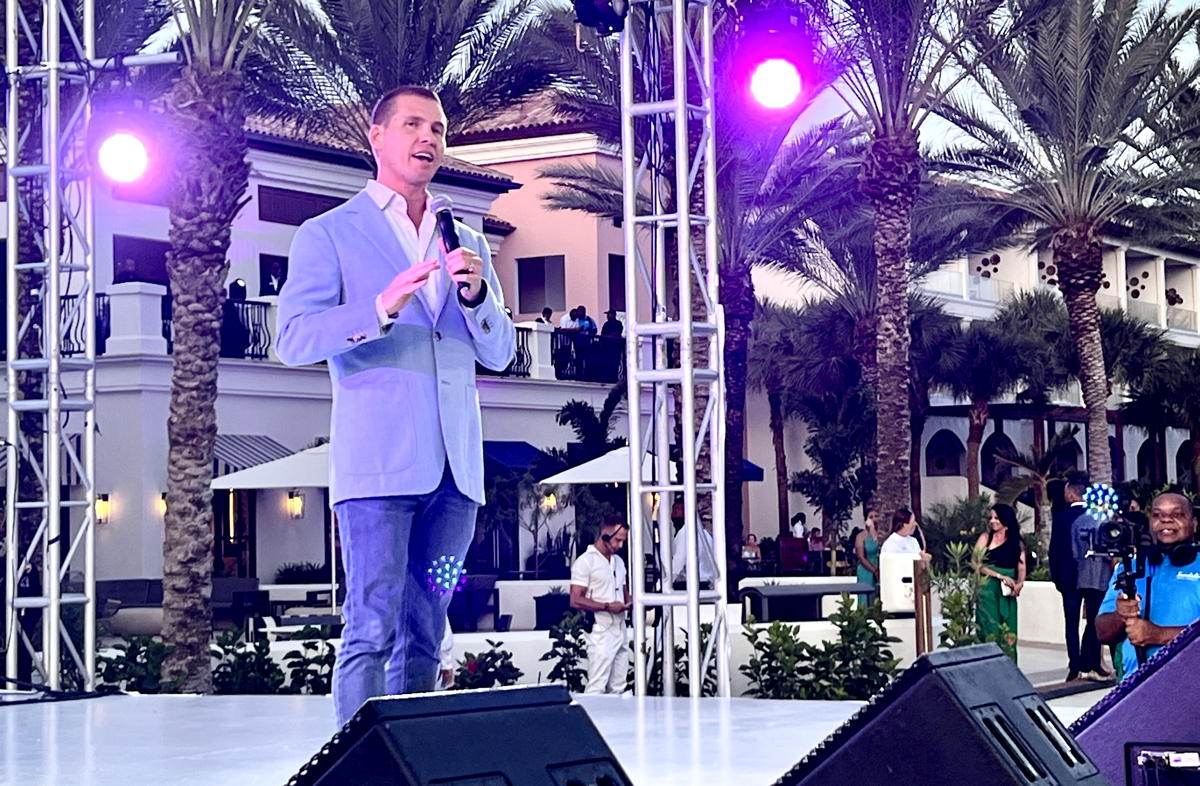 Over the years, it was Gordon’s mission to find the most stunning destinations in the world and acquire prime real estate in the Caribbean, whenever he saw it, even if there were no immediate plans to develop it.

And Curaçao, a dynamic island with Dutch, Spanish and African influences that sits between Aruba and Bonaire on the outer fringes of the hurricane belt, was on his radar.

In fact, in 2009, Adam and his father toured the lagoon and bay-facing compound that was previously known as the Santa Barbara Resort (it was also, at one point, a Hyatt). 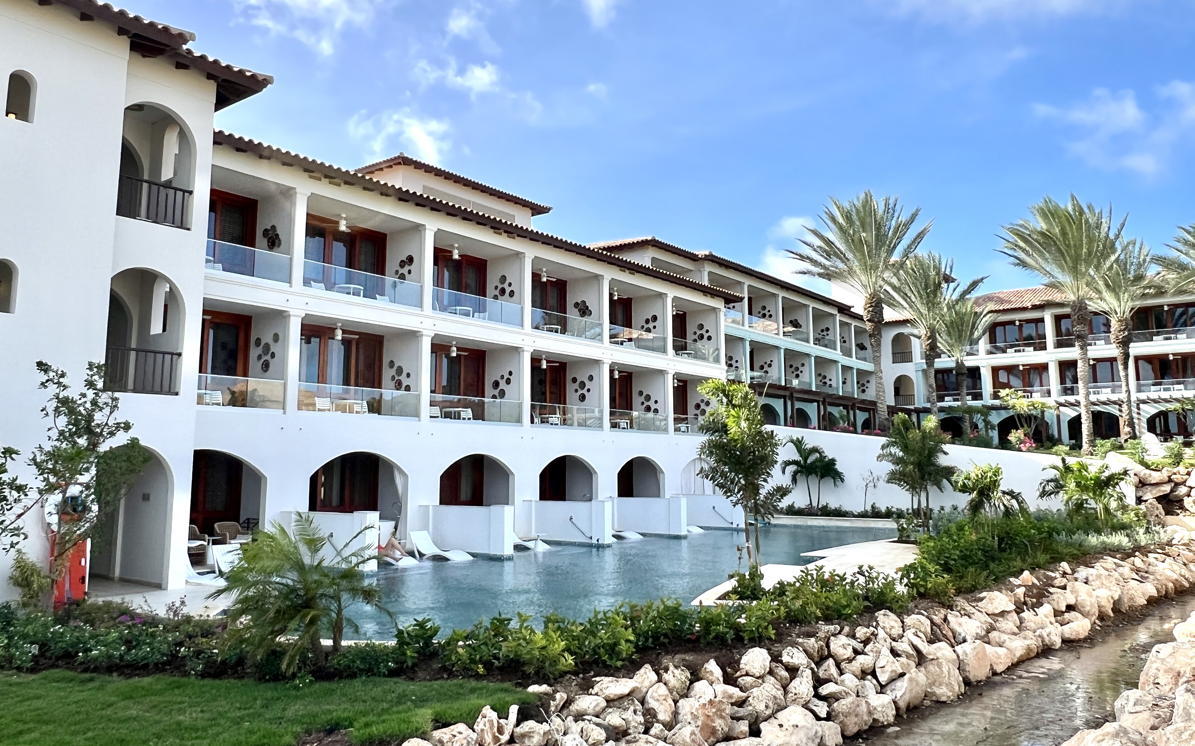 “We took a walk through one of the suites and said [to each other]: “Could you could imagine if Sandals could get our hands on a resort like this and ‘Sandalize’ it?” Adam said.

(Sandalize – a word that describes the process of transforming a property into the high-end “luxury-included” experience Sandals is known for).

As fate would have it, an opportunity to acquire the property Adam and his father sized up more than a decade ago eventually materialized, and Sandals Royal Curaçao, opening on June 1 with 351 modern and spacious rooms and suites in 24 categories, is the father and son’s vision come to life. 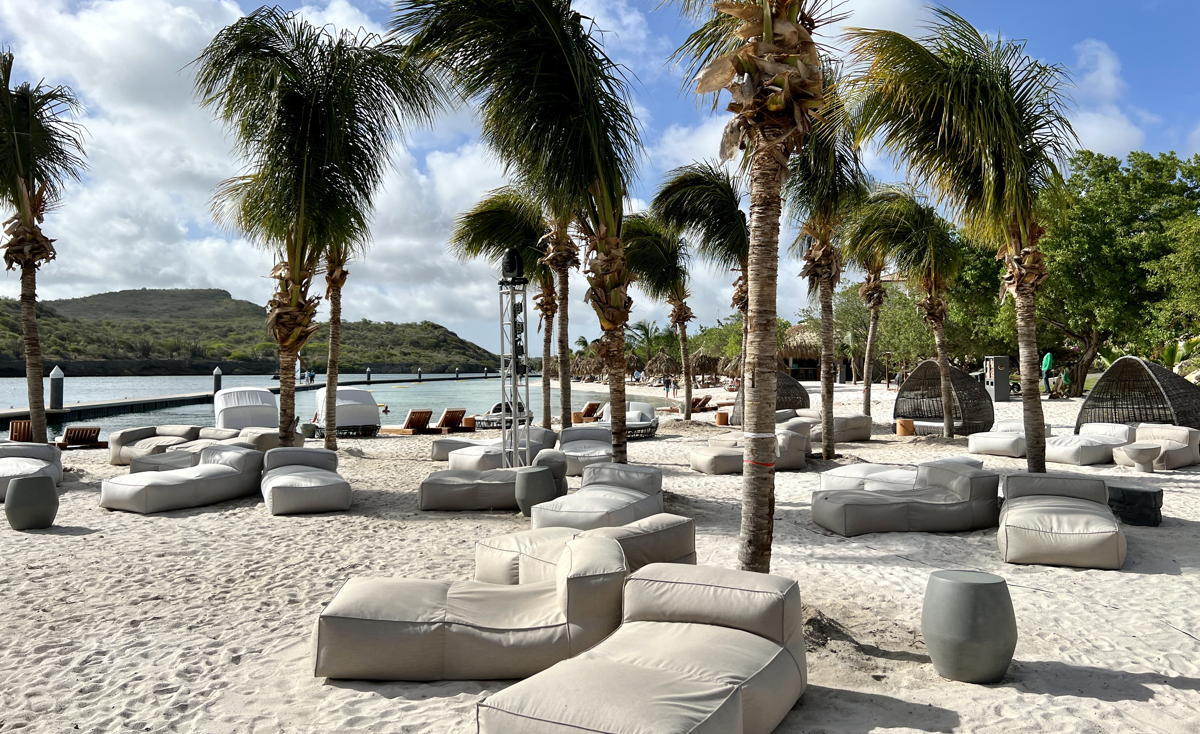 The resort that sits on 44 lush acres of a 3,000-acre estate that has a golf course and two marinas is “a signal of the future and strength of Sandals Resorts,” Adam, standing on a lit-up stage that would later host carnival dancers, dancing saxophone players and an electrifying percussion show by The Blue Man Group, told the crowd at Thursday night’s opening bash.

“Sandals Royal Curaçao is going to change the travel industry, and change Curaçao, for the better,” the Chairman said. 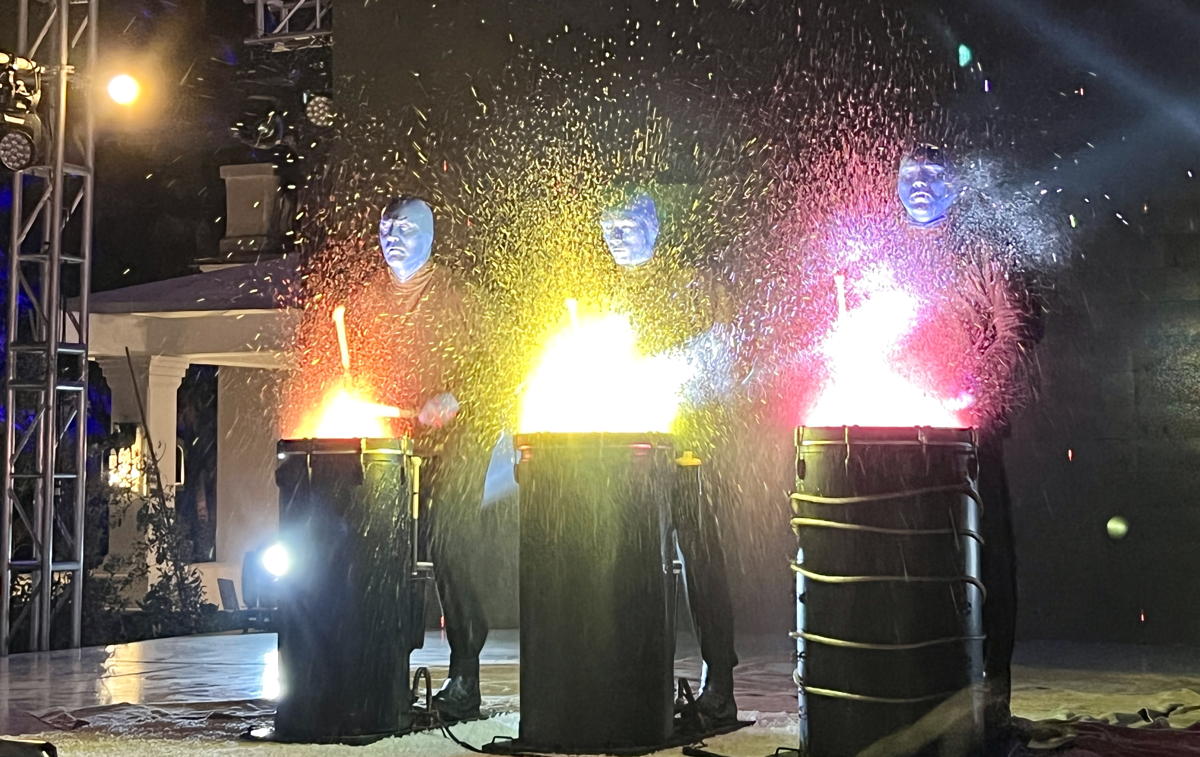 The divine aspects of Sandals Royal Curaçao – which represents the first time Sandals has ventured out of the English-speaking Caribbean – are in the details.

As PAX reported last week after touring the all-inclusive, adults-only property located about 45 minutes from Curaçao International Airport, there are several “firsts” worth noting.

(Both of these top categories are already mostly sold out for winter 2022/2023, we were told). 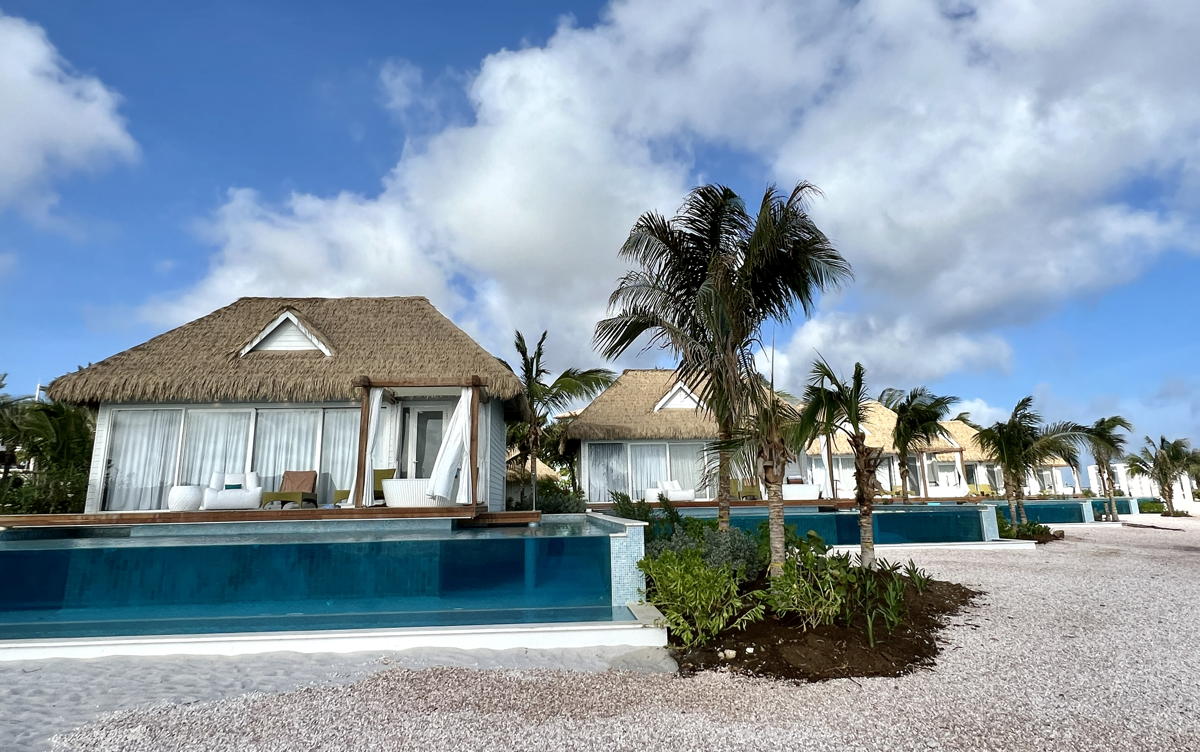 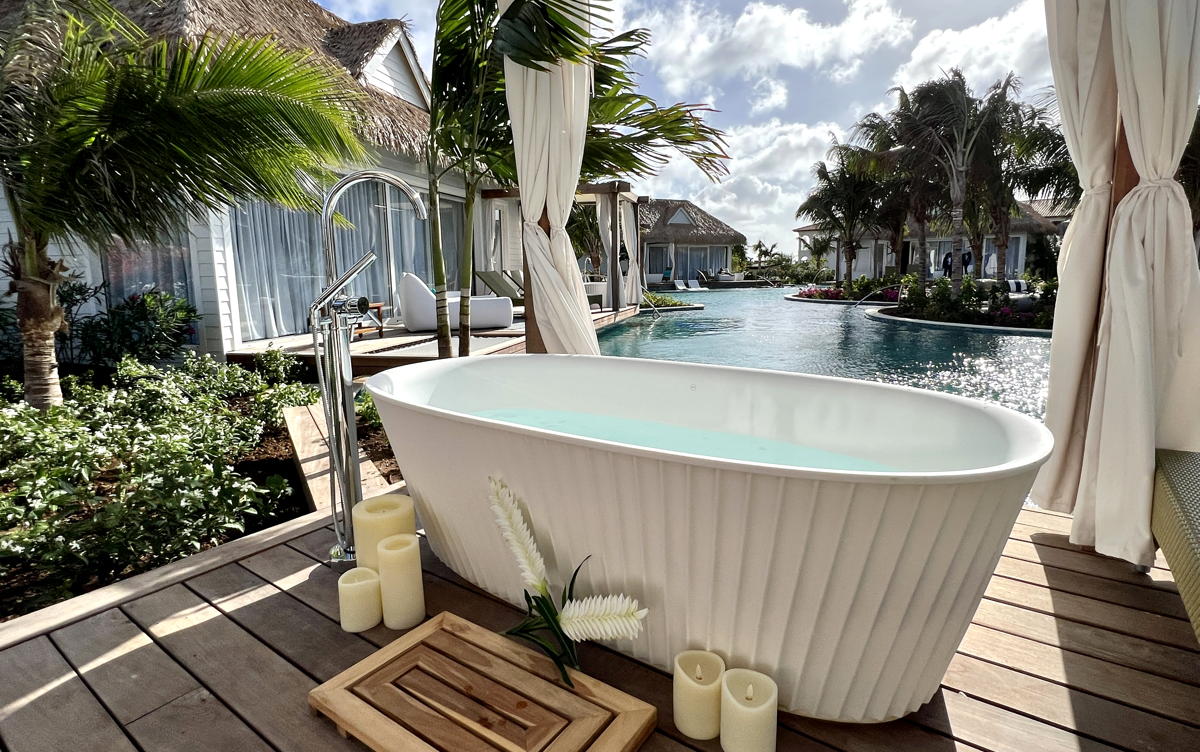 The new suites add to a new concept called “Island Inclusive”: Sandals Select Reward Members and guests staying in Butler Suites for a minimum of seven nights receive a $250 gift certificate that can be used at partner restaurants in nearby Willemstad, Curaçao’s colourful capital city which doubles as a UNESCO World Heritage Site.

“We’re encouraging guests to go into town,” Jeff Clarke, CEO of Unique Vacations Inc., the sales and marketing arm of Sandals and Beaches Resorts, told PAX. “Customers want that experiential part of the travel experience. Not just the resort side.” 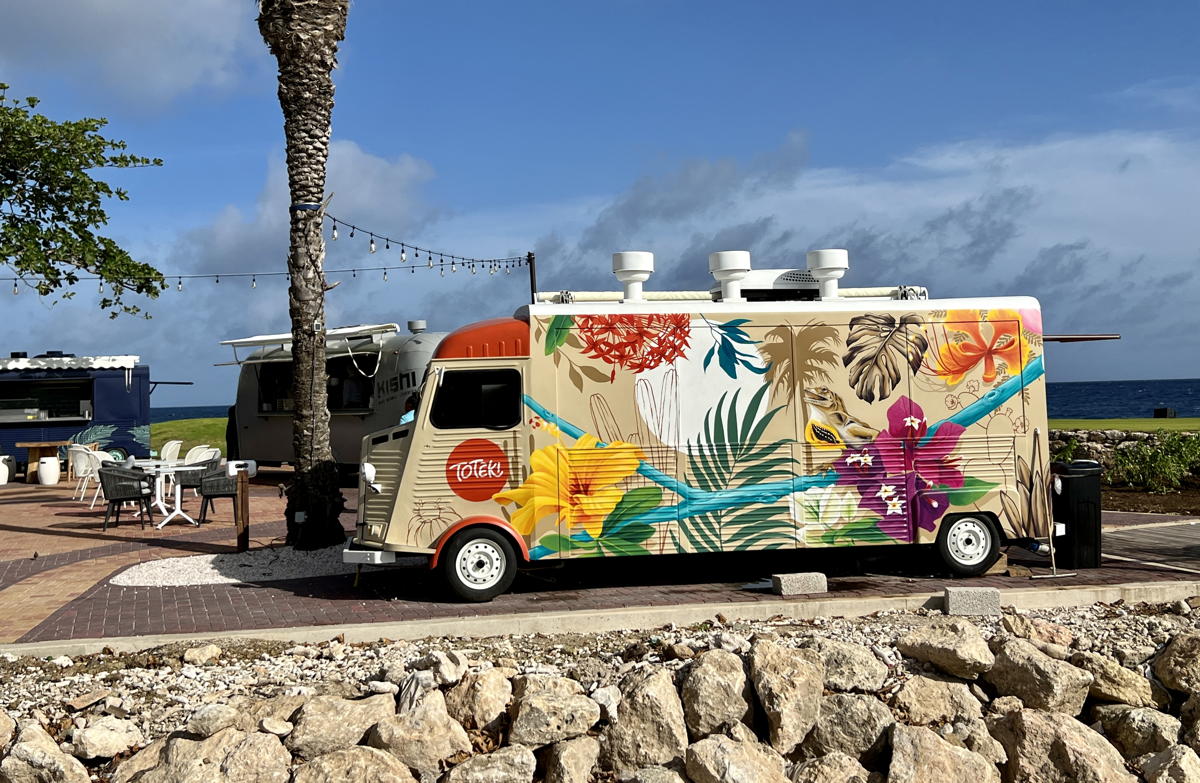 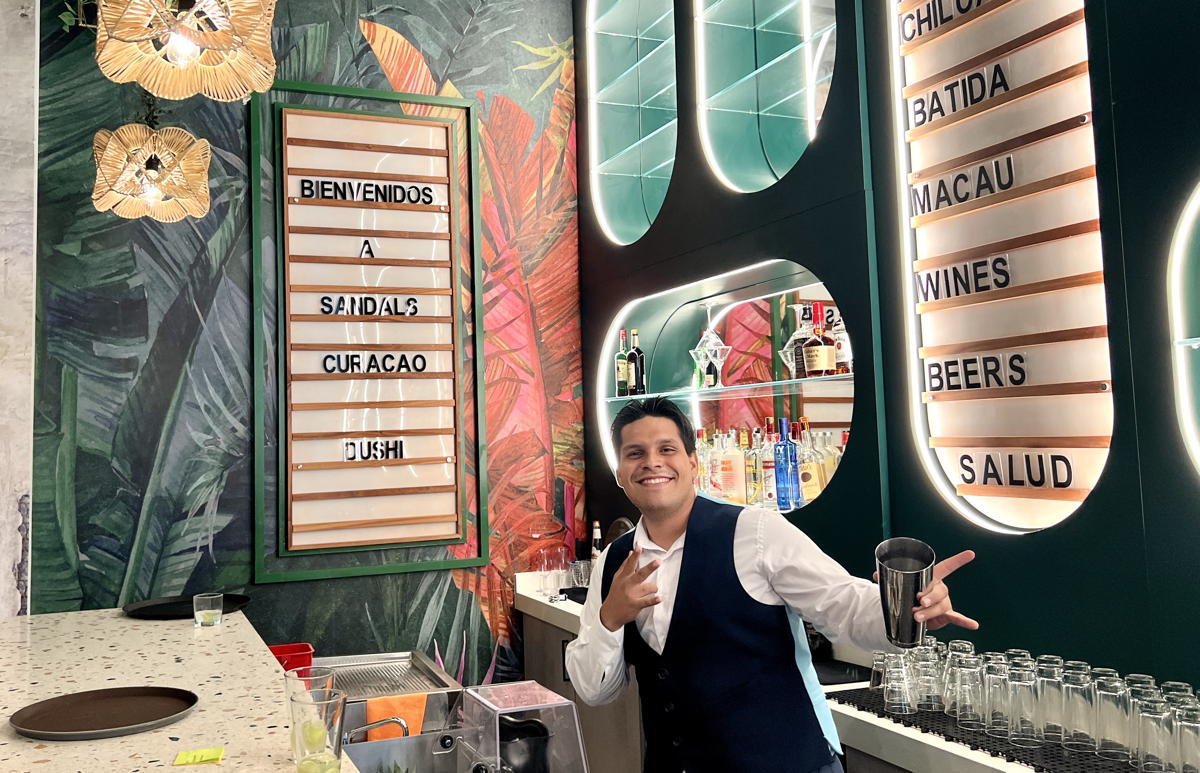 Butch’s Island Chop House, a high-quality steak and seafood eatery named after the company’s late founder, is also included in the mix.

There’s a “pool first,” too.  The two-level Dos Awa Infinity pool – an “infinity pool within an infinity pool” that offers views of the ocean and mountainous landscapes.

(Speaking of, as journalists pointed out this week, there’s a sky-high cliff near the property that looks exactly like “Pride Rock” from Disney’s The Lion King).

Despite opening just four weeks ago, Sandals Royal Curaçao is very much a finished product, with restaurants delivering fantastic meals without delays.

Diligent staff are three steps ahead of guests at all times. The time it took to train the team certainly shows.

But Sandals Royal Curaçao’s story isn’t finished yet as Mr. Clarke confirmed with PAX that Rondoval Suites – an upgraded room concept that has evolved ever since first debuting at Sandals Grande Antigua in 1991 – will be added to the property in “the very near term.” 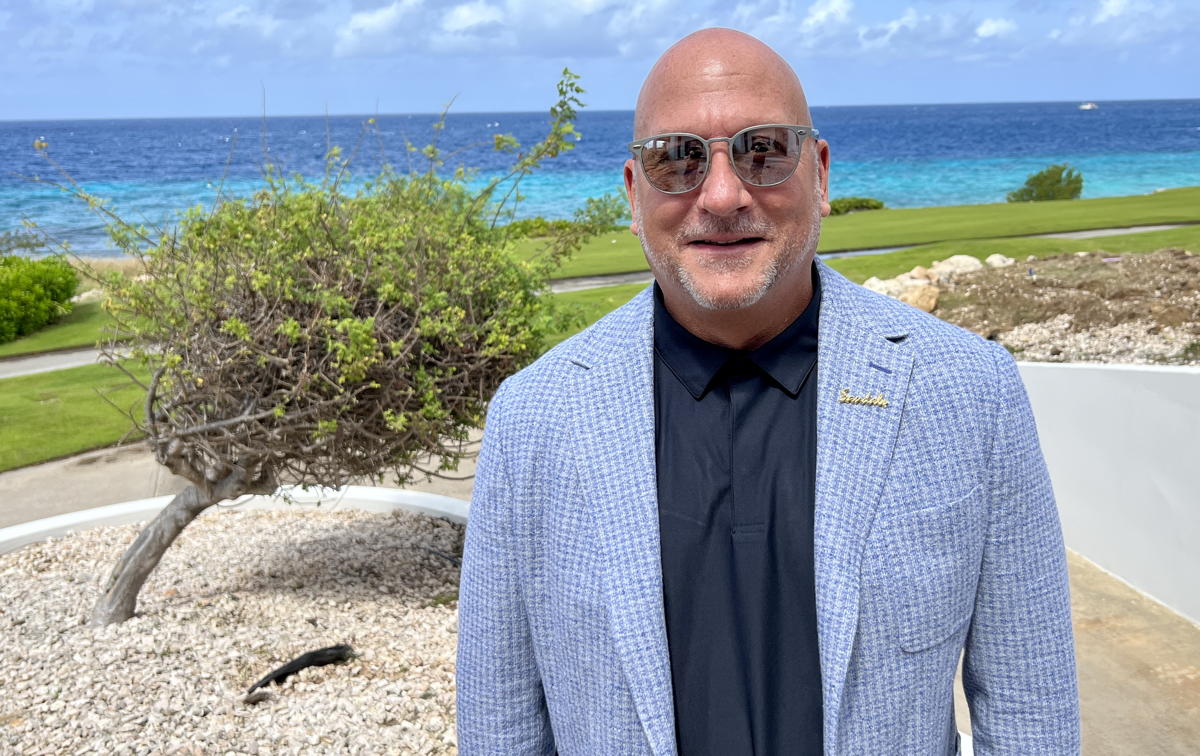 After all, with 44 acres to work with, there’s room for expansion.

“But in our nature, we’re not a concrete jungle. We never have been a concrete jungle,” Clarke clarified. “We like the open space and nooks and crannies where guests can go and have a quiet moment.”

However: “We feel [Sandals Royal Curaçao] could easily accommodate another 100 rooms without altering the feel of the resort. The restaurants were built for more guests, so stay tuned. It’s coming.” 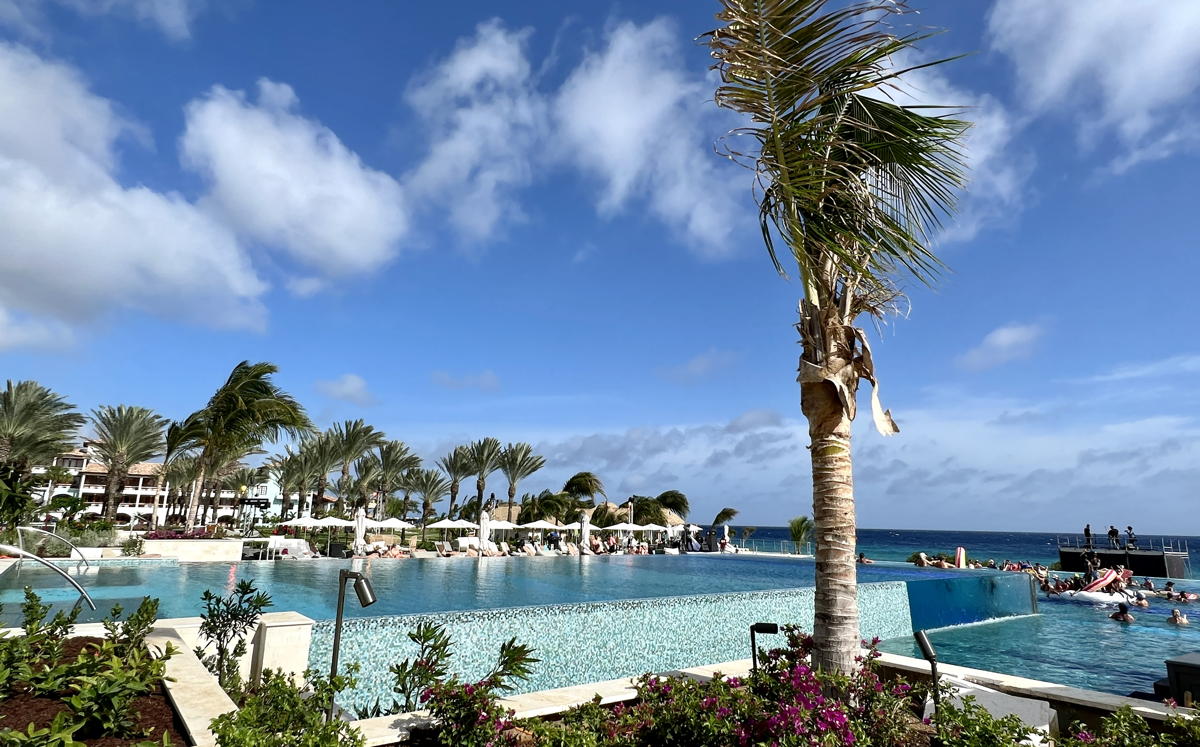 Still, amid all this innovation, the beating of heart of Sandals as a romance destination remains active.

Heart-shaped loungers are peppered along Sandals Royal Curaçao’s soft and buttery beach, which curves around from front to side, and the Kurason Island Poolside Butler Bungalows, if looked at from above, form the shape of a heart. 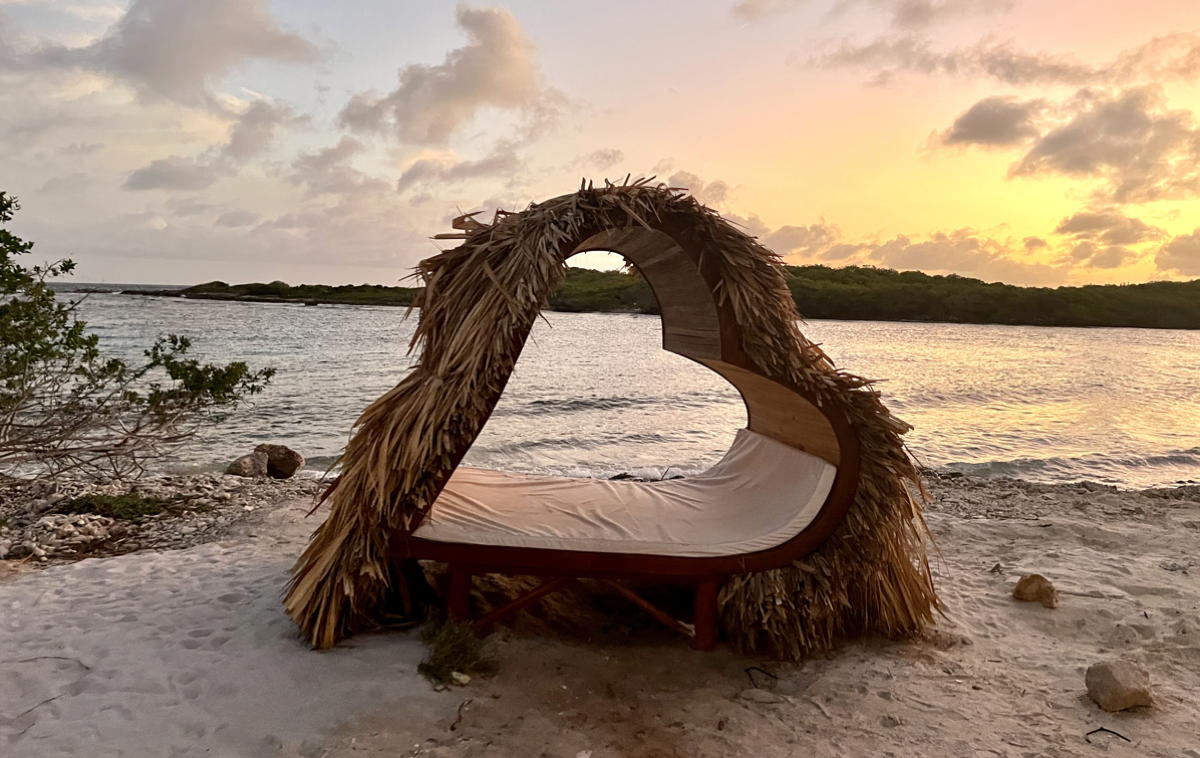 And as Adam Stewart later explained at a media breakfast on Saturday morning (June 25), where he and U.S. designer Stan Herman and colleague Michael Schwartz hosted a fashion show to debut Sandals’ reimagined team uniforms, the “number one thing customers are looking for to maintain romance is that sunset.”

This is why the sea-facing wedding chapel, Awa suites and select other rooms face north, where blazing sunsets come alive in the evening. 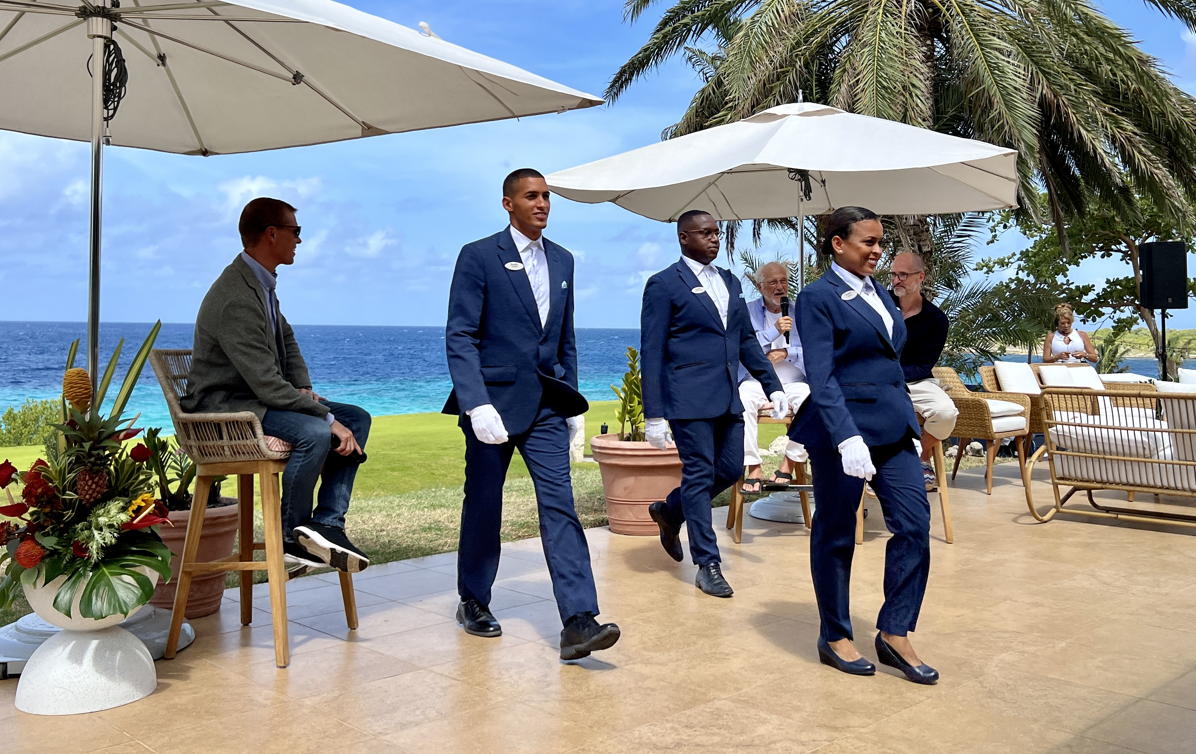 Maureen Barnes-Smith, vice-president of sales and marketing, Canada at Unique Vacations Inc., says Sandals Royal Curaçao “doesn’t look like another resort we have.”

“But the authenticity of the Sandals spirit is here,” Barnes-Smith told PAX at last Thursday’s opener, which was also attended by Zeina Gedeon, CEO of Travel Professionals International (now Trevello) and Wendy Paradis, president of the Association of Canadian Travel Agencies (ACTA). 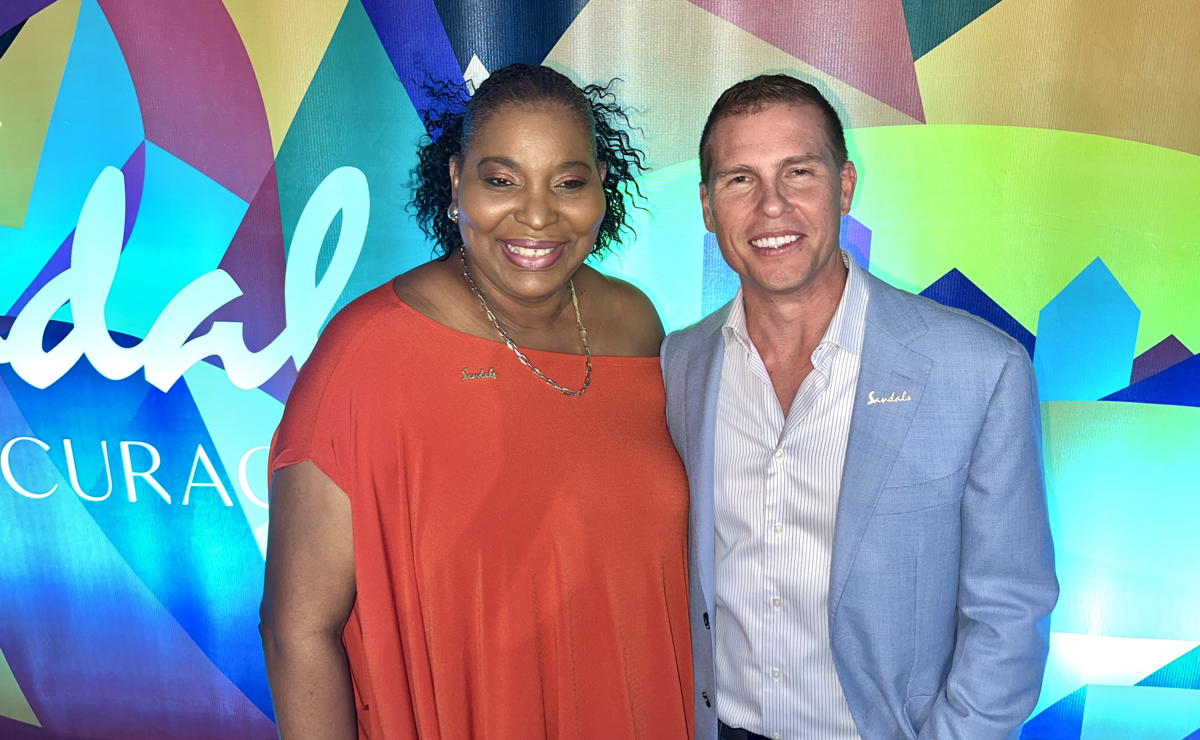 One incredible experience from that launch event were pink flower “sway pole” installations, a cirque-style stage element whereby models, suspended atop, wearing flowing fabric to resemble petals, swung back and forth, leaving audiences memorized and amazed.

Direct flights from Canada to Curaçao, via Air Canada and WestJet, are also expected to return this fall, she said.

“The demand is there,” she said. 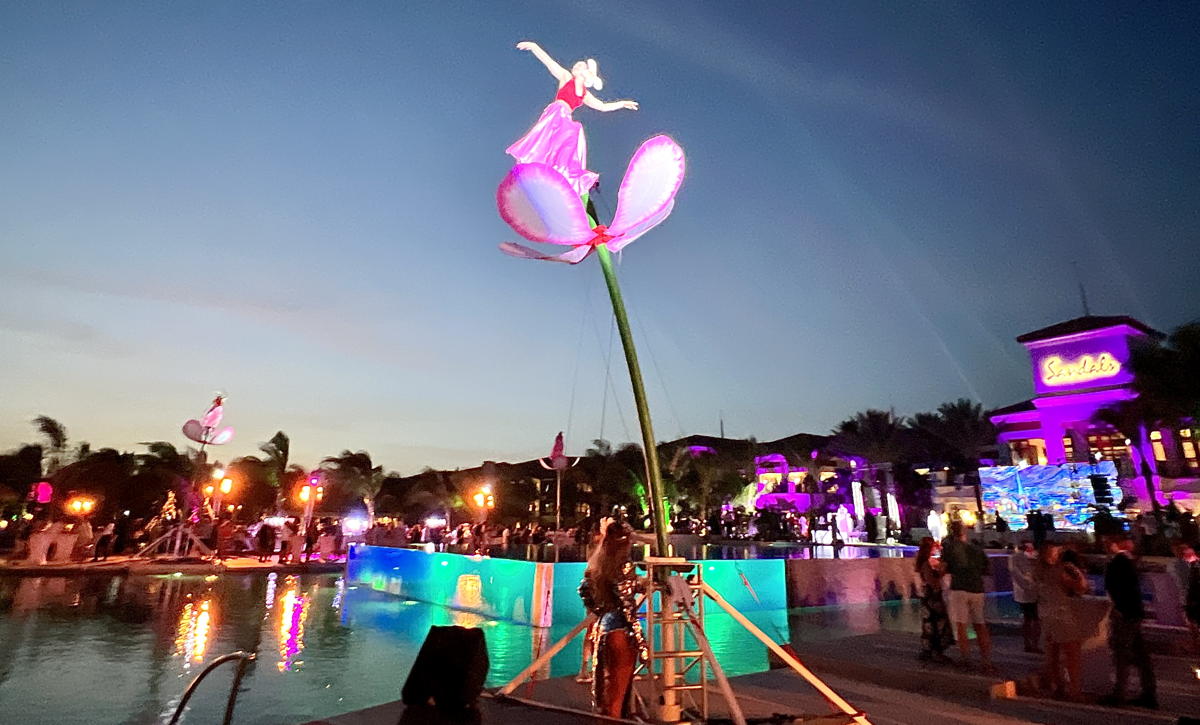 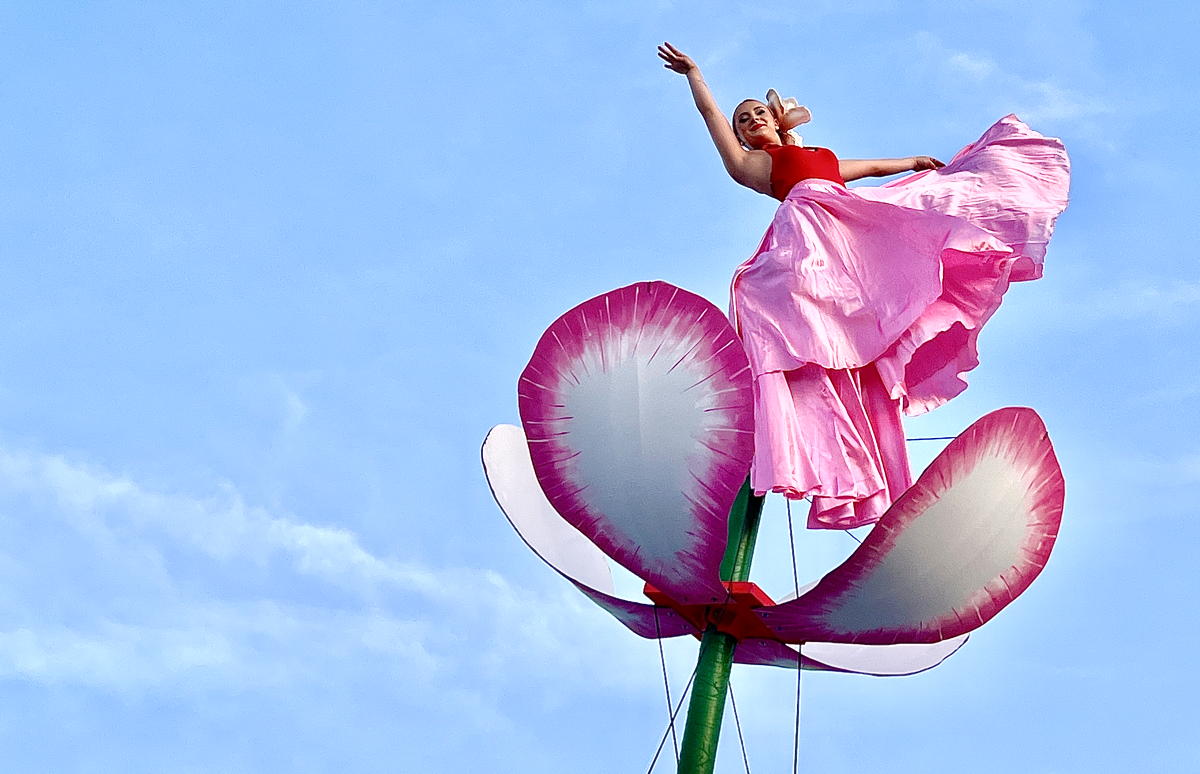 From plastic to products

There’s a community element at Sandals Royal Curaçao too.

Sandals Royal Curaçao, Sandals Resorts International and its philanthropic arm, the Sandals Foundation, have joined forces with the Netherlands’ AFC Ajax team to launch Future Goals – a program that turns fishing nets sourced from the ocean and recycled plastic waste into soccer nets for children.

A local recycling company, called Limpi, oversees production of the nets, and PAX had opportunity to visit the facility over the weekend to get a closer look.

Limpi means “clean” in the native language of Curacao, Papiamentu, and company founders Debrah and Mitchell (who met while studying industrial product design in Holland) have made it their mission to create awareness of the world’s plastic problem. 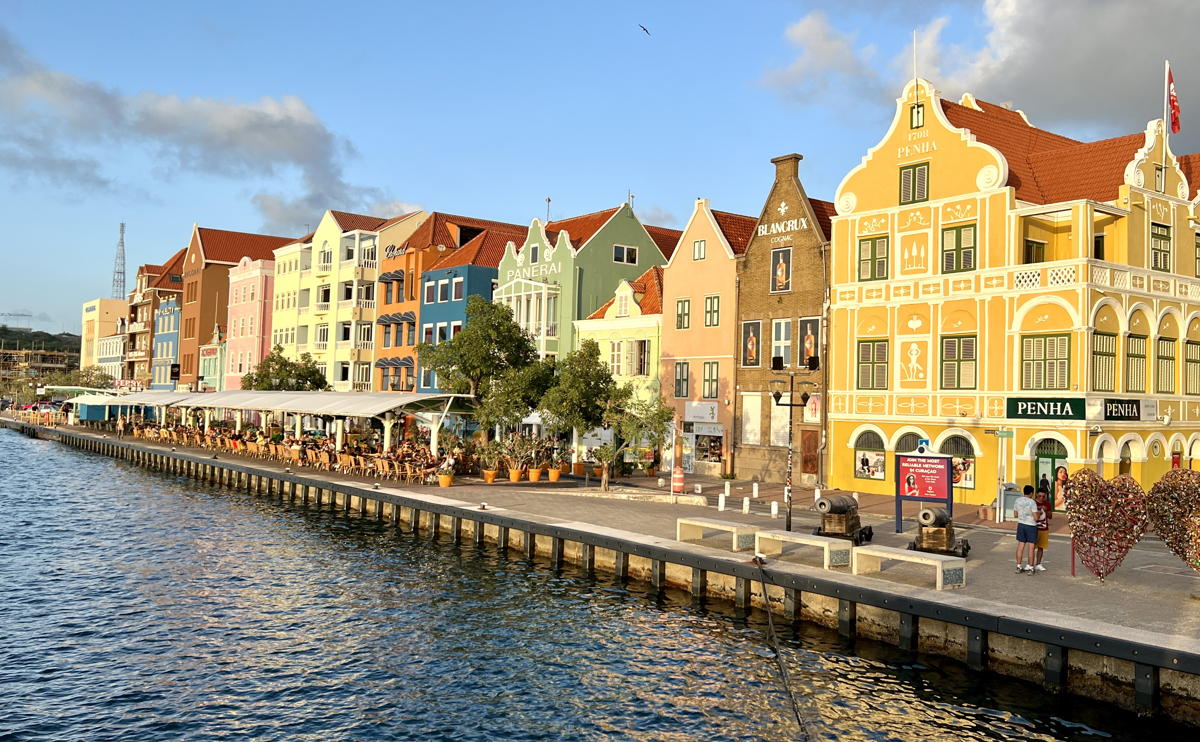 Using machines they built and designed, the duo takes plastic waste and turns it into products, like turtle and starfish-shaped keychains, beach towel clips and coaster sets.

Sandals not only paid for new machines that have helped Limpi speed up production, but it also sells the recycled products at the Sandals Royal Curaçao gift shop. 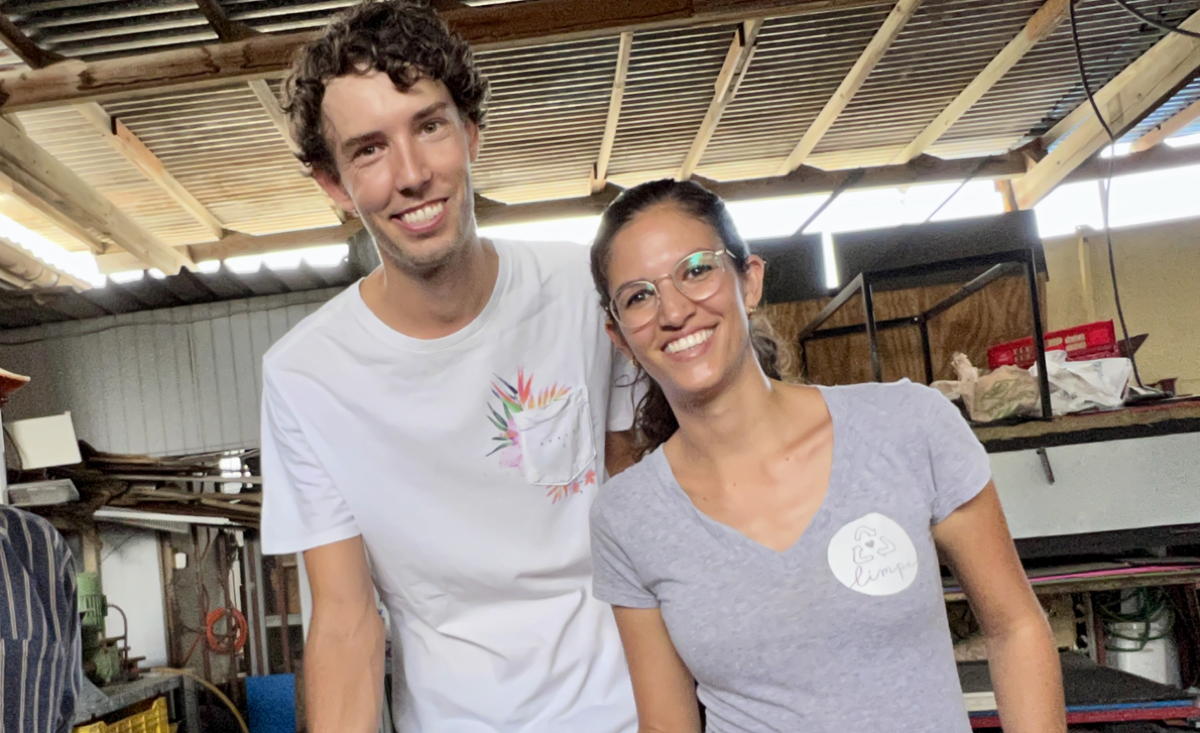 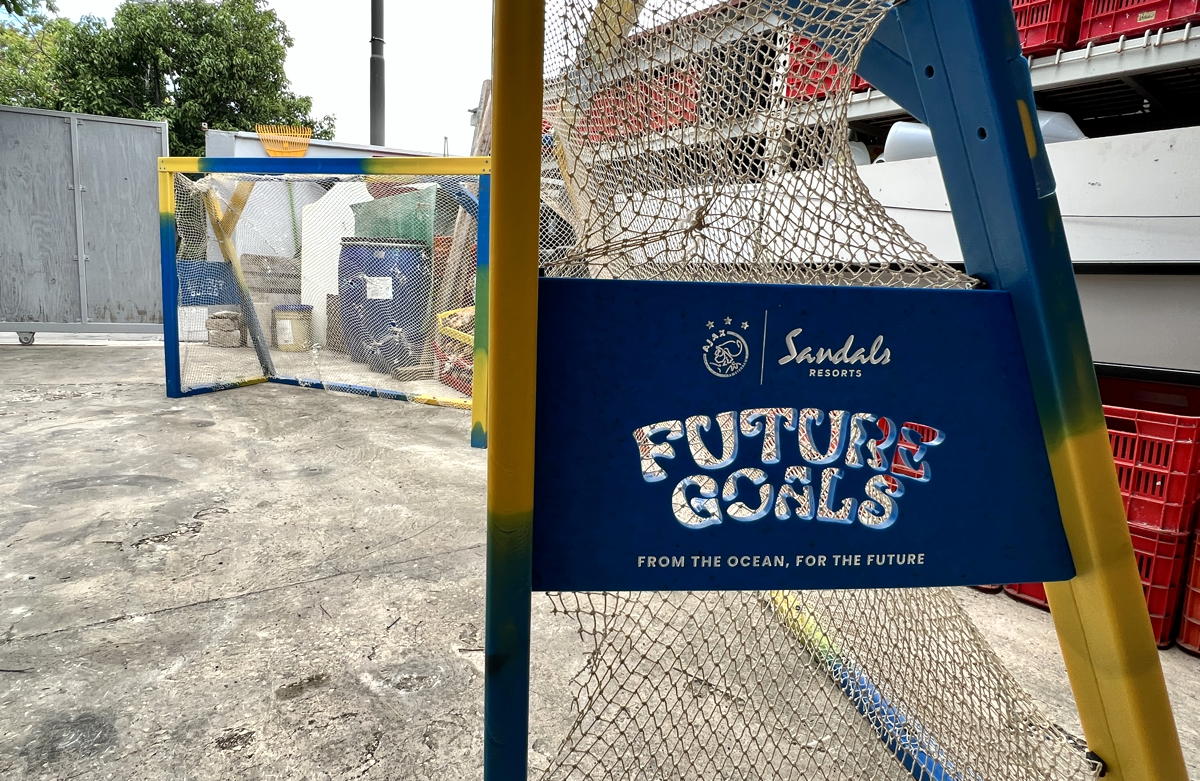 As for what comes next, Sandals Resorts International, now in its 41st year, shows no signs of slowing down.

Given the company’s vast real estate portfolio, it appears the global brand is aiming to nearly double its footprint, and quickly.

The growth is already ramping up with the soon-to-be-unveiled Sandals Dunn's River in Jamaica.

Sandals managed this property (but didn’t own it) in the 1990s. It changed hands and, most recently, was operated by Playa Hotels and Resorts as Jewel Dunn’s River, until Sandals acquired it during the pandemic as new owners.

“We’re in the middle of blowing it to pieces and will soon announce its opening date,” Stewart told reporters over the weekend. 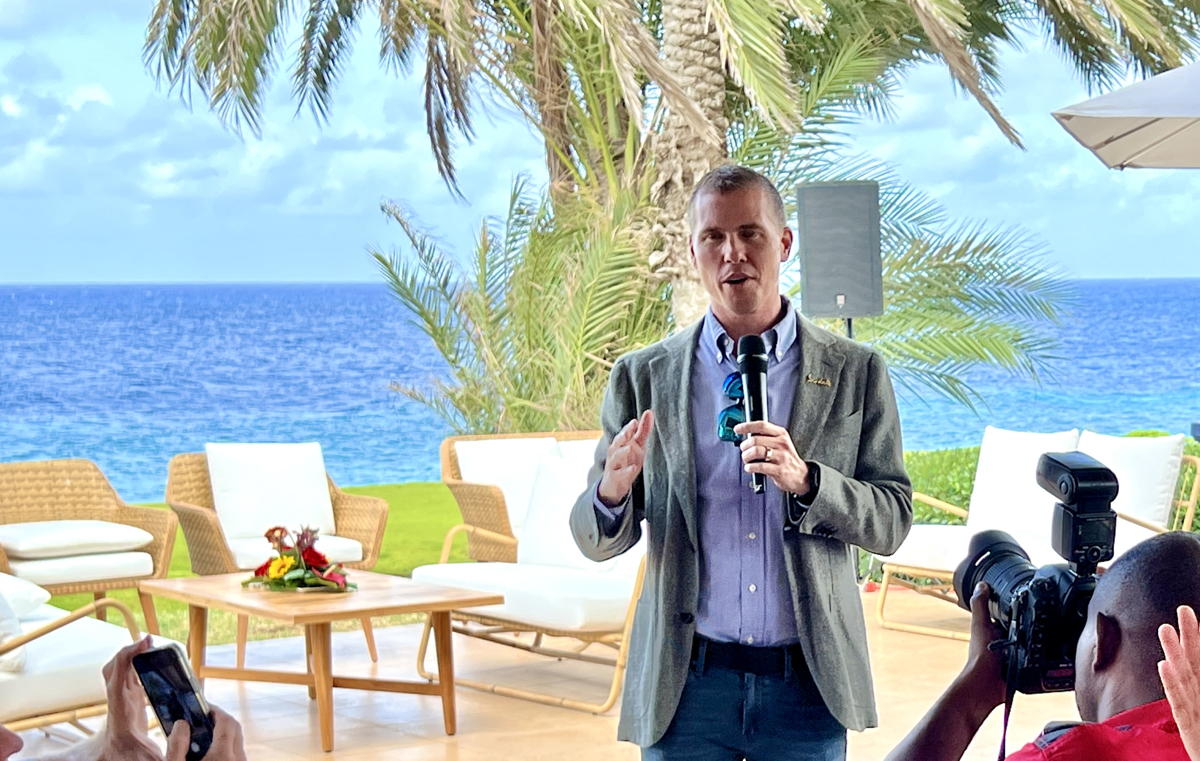 It will have Rondoval Suites with rooftop terraces, mineral water flowing through the grounds and a new Red Lane Spa “like one we’ve never built before,” Stewart said.

“Put your seatbelts on, because the next five to 10 years are going to be insane,” Stewart said.