RIU to open 350-room hotel in the heart of Chicago

RIU Hotels & Resorts is expanding its line of Riu Plaza urban hotels by purchasing a plot of land in the heart of Chicago.

The newly-built skyscraper will house a hotel with 28 floors and more than 350 rooms.

Construction work will begin in spring 2022 and is expected to last for around two years.

“We have been working to make this opportunity a reality for several years. It’s a dream location for any investor, right in the heart of the city. That’s why I’m so delighted to present this project, which has gone ahead despite numerous difficulties. Chicago is a great tourist destination that complements and enhances our range of urban hotels and strengthens RIU’s commitment to the United States, where we are about to open our fourth hotel, the Riu Plaza Manhattan Times Square”, said Luis Riu, CEO of RIU Hotels & Resorts.

The building that houses RIU’s new 4-star hotel will be Chicago School, an architectural style developed in this city in the late 19th and early 20th century that used pioneering materials and techniques to construct large buildings. In fact, an example of this style, the 10-floor Home Insurance Building inaugurated in Chicago in 1885, is considered to be the world’s first skyscraper.

The future Riu Plaza hotel will be located at 150 East Ontario Street in the Streeterville neighbourhood, an area that is brimming with commercial and cultural life close to the famous Navy Pier, with the Chicago River to the south and Lake Michigan to the east. 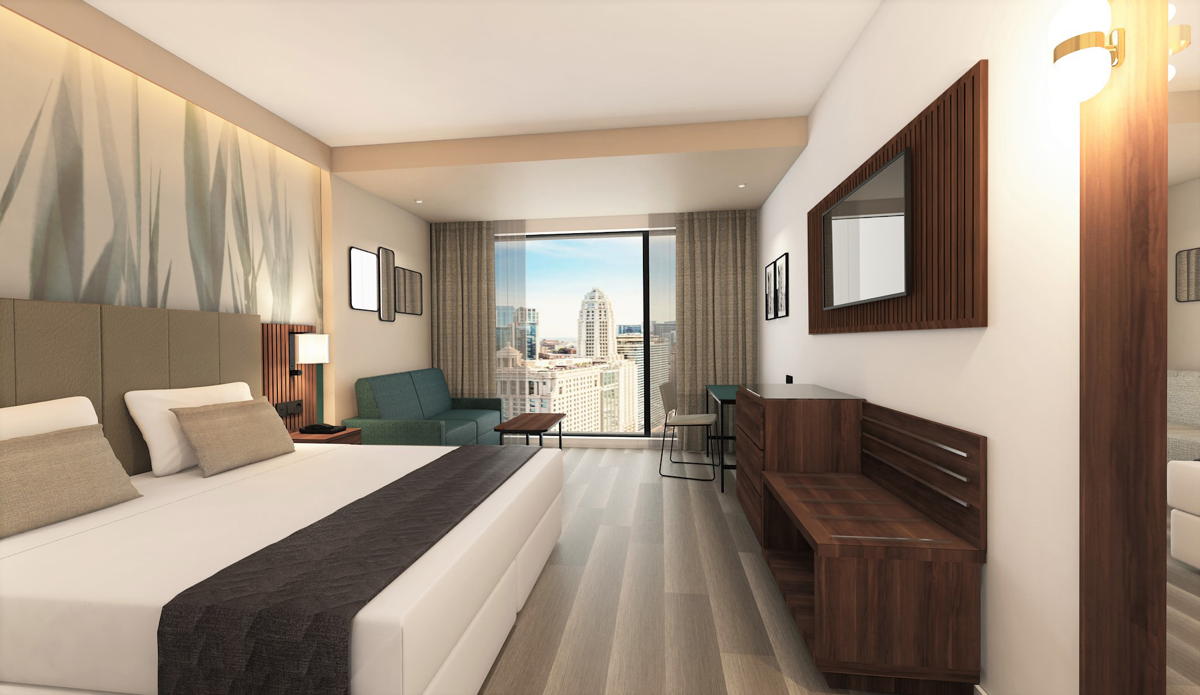 It will be fully focused on travellers visiting the city for business or tourism and will offer a competitive range of services including breakfast, just like the chain’s other Riu Plaza urban hotels.

The classic facade will complement the building’s modern and functional interior, with a stand-out Sky Bar on the 26th floor.

RIU is about to open the hotel Riu Plaza Manhattan Times Square, taking the number of Riu Plaza hotels to nine.

In the next few years, the Riu Plaza brand will also find its home in Canada and the United Kingdom.

In London RIU has acquired a building next to Victoria Station, where construction work has already begun to convert it into a 4-star hotel with 435 rooms that will open its doors in 2023.

Meanwhile, in Canada it has selected Toronto as the home of the newly-built Riu Plaza Toronto hotel, with 350 rooms, meeting rooms, a gym, a bar and a restaurant.