Founded in the summer of 1997 with the opening of the Hotel Riu Yucatan in Playa del Carmen, this year marks the 25th anniversary of RIU Hotels & Resorts in Mexico.

Mexico is RIU's main international destination, with 20 hotels in five Caribbean and Pacific states, including 12,000 rooms and nearly 9,000 employees.

Nearly 40 per cent of RIU's global talent is Mexican, compared to 18 percent that are Spanish, a testament, the company says, to what makes Mexico RIU's most important destination.

Additionally, RIU noted that it was able to operate its hotels because Mexico committed to keeping the country's borders open throughout the pandemic - Mexico became "the lungs that allowed the rest of the company to continue breathing."

In celebration of this milestone, throughout the year, Riu hotels will express its gratitude to the country, its professionals and to national guests from Mexico, 850,000 of whom visited their hotels in 2021, including the Mexican suppliers who provide 98 per cent of their hotels with goods.

As part of Tianguis Turstico 2022 in Acapulco, Joan Trian Riu, corporate executive director, and Mexico's Secretary of State for Tourism, Miguel Torruco, presented the most significant figures and milestones from RIU's time in Mexico to the authorities, the media, and tour operators. 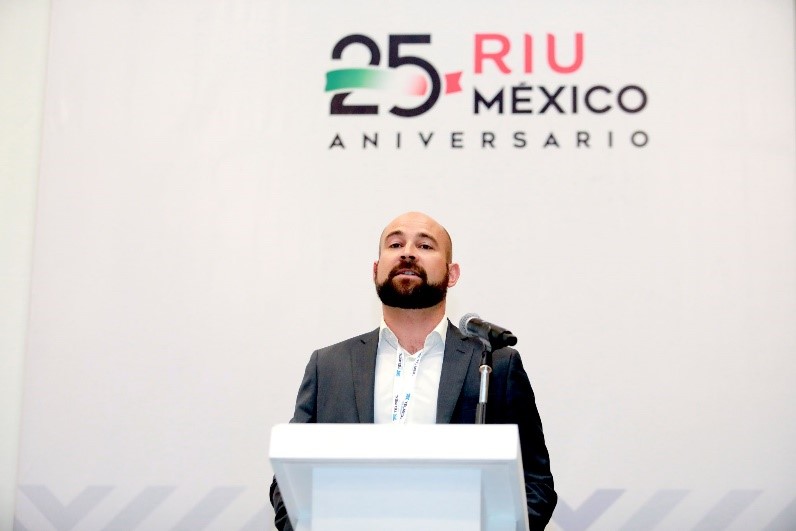 RIU's 25th-anniversary video was presented at the Tianguis meeting, which highlights what Mexico means to the company.

Riu reports that several activities have been planned throughout the year to commemorate the milestone. Guests, employees, and partners can participate via social networks, the media, or on-site at hotels.

During its time in Mexico, RIU gained an in-depth understanding of many different areas of operations, which has had a significant impact on the company's expansion to 20 countries.

Mexico, for example, has some of the world's most prestigious structural engineers due to its adverse weather conditions and earthquakes. It's this reason Mexican professionals work on RIU construction projects all over the world.

Mexico's rich and diverse food culture was highlighted by RIU, who praised the talents and professionalism of Mexican Chefs that start working for the brand in Mexico before going on to work in different destinations as head chefs. This is also the case with Mexican technical service managers, who are chosen to be in charge of hotel maintenance in a variety of countries.

RIU's cocktail menus worldwide have a profound Mexican influence as a result of the country's strong tradition of cocktail making.

Also, the enthusiasm and professionalism of the entertainment teams in Mexico have made it the destination of choice for trying out new ideas, such as the Riu Party events, which began in Los Cabos and were perfected there before being introduced globally.

RIU shared that it is, however, the talent of RIU's Mexican collaborators that makes its hotels in Mexico stand out from the crowd. Their commitment, friendliness, hospitality, and professionalism make it possible for RIU to welcome 1.6 million guests into its hotels in Mexico each year.

RIU supports communities and biodiversity in Mexico too. Among the chain's most significant projects is the partnership with Fundación Aitana, which funds all chemotherapy costs at Cancun General Hospital. RIU also supports Save TheNew Children, Dr. Sonrisas, and Coco’s Bienestar Animal, and has a coral restoration programme alongside Oceanus.

In light of all of these factors, RIU remains committed to Mexico in 2022 and will open two new hotels later in the year - The Riu Latino on Costa Mujeres will open in October, while the Riu Palace Kukulkan will open in November in Cancun.