Playa unpacks property updates at Toronto roadshow (and, oh, the t-shirt war is over)

First thing’s first: the t-shirt war is over.

That’s right. The popularity contest between Playa’s three Canadian BDMs that went viral this past summer – whereby t-shirts favouring one Playa BDM over the other were mailed to travel pros countrywide and posted online as a meme – is done. 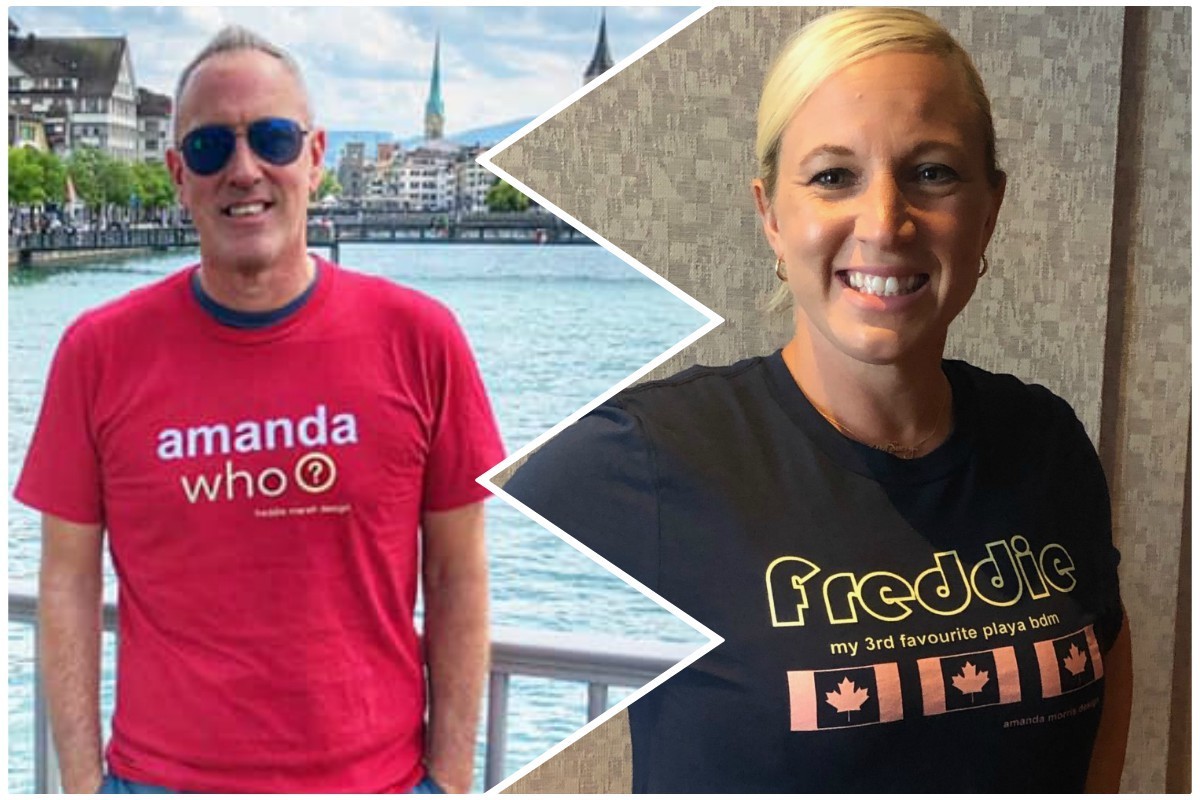 The brilliant campaign that started as a playful prank between BDMs Freddie Marsh and Amanda Morris, only to grow into an international phenomenon, had a good run.

But you heard it here, folks. Amanda Who? is no more. (Click here for the full story if you’re still in the dark on this one).

Rose Cosentino, vice-president of sales for Canada at Playa Hotels and Resorts - the boss - squashed the whole thing yesterday in an internal email to staff.

“OK you 3, you had your fun with the whole t-shirt war, but...we all know who the real Queen Bee is. Now get back to work, we’ve got 20 resorts to fill,” Cosentino wrote in the email, obtained by PAX.

Then, to add insult to injury, an image of Cosentino wearing a t-shirt of her own reading “Queen Bee,” written above a graphic of an actual bee, emerged. 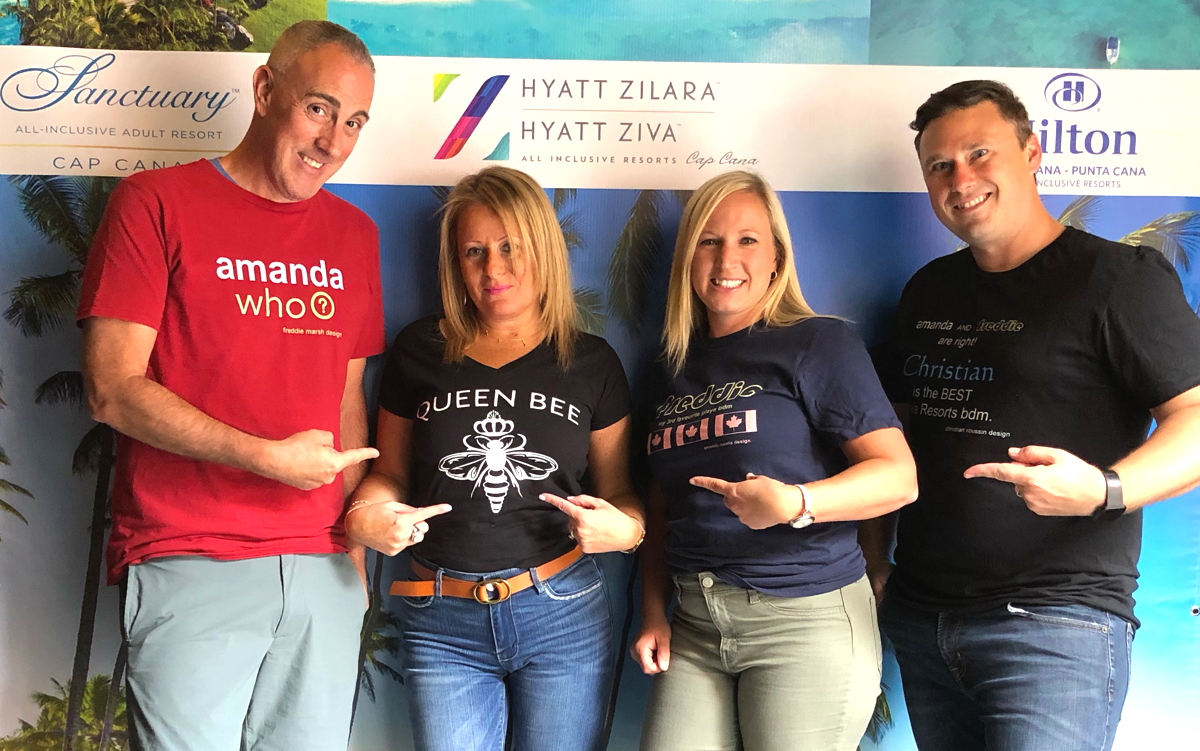 The photograph shows Cosentino posing alongside her Canadian team, each of whom are wearing their respective t-shirts that became famous industry-wide over the summer.

“I had to end it,” Cosentino told PAX last night (Sept. 4th) at the Toronto stop of Playa Hotels and Resorts' first-ever Canadian roadshow.

For the record, Cosentino wasn’t the one who actually ended “the t-shirt war,” as it’s called nowadays.

The email Cosentino sent was in jest, and it was, in fact, her three BDMs – Freddie in the West, Amanda in Ontario and Christian Roussin in Quebec and Atlantic Canada – who, collectively, decided their t-shirts had successfully run their course.

“We were just amazed by how people embraced it and had fun with it,” Marsh, Playa’s BDM for Western Canada, told PAX at the event, which was held at Arcane nightclub on King Street West. “We really want to thank everyone who participated and went out of their comfort zone to post photos.”

Morris, Playa’s BDM for Ontario, echoed that sentiment. “It took off way better than I expected,” she said. 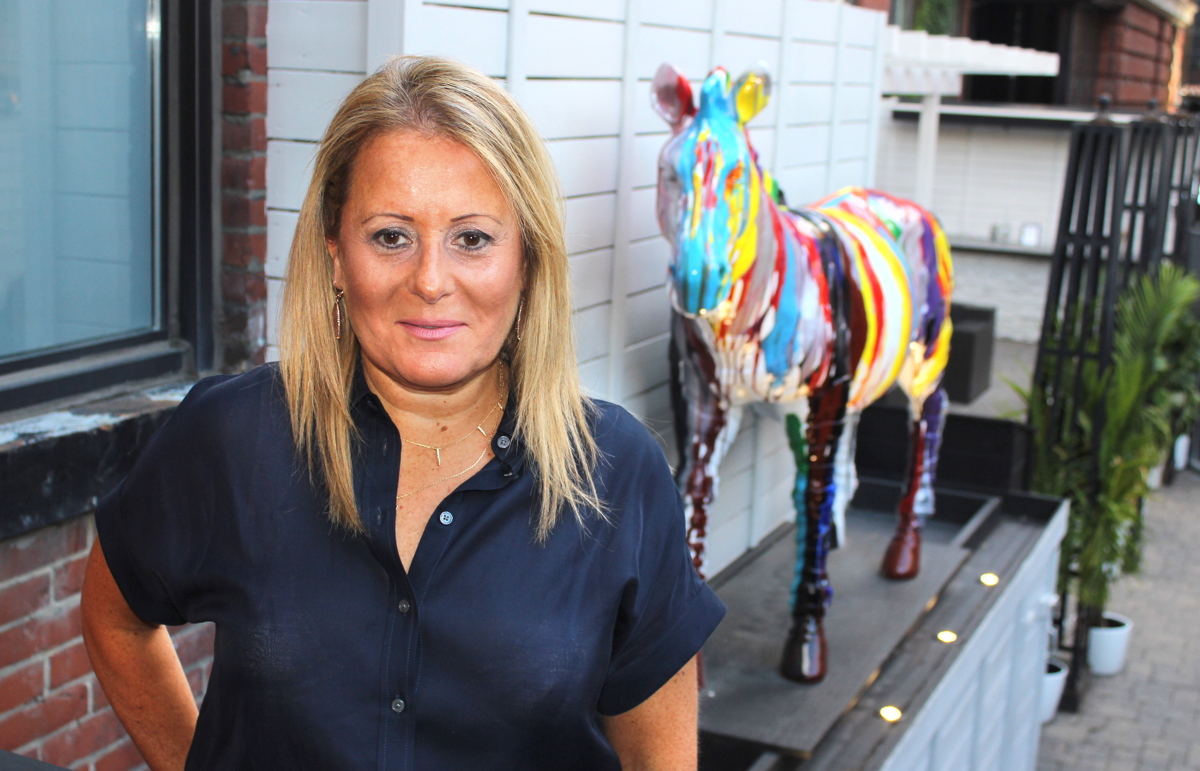 Cosentino applauded the whole idea, praising her team for staying top-of-mind amongst travel agents during the slow summer months, and for keeping Playa’s “fun factor” alive and well.

“Our bookings did not slow down. It helped business,” Cosentino told PAX, reflecting on the famous t-shirts.

The Queen Bee has spoken.

All eyes on Dominican Republic

Ending the Playa t-shirt debacle was just a tiny slice of the proverbial pie last night as Playa Hotels and Resorts welcomed close to 50 industry peeps – a mix of agents and suppliers – to learn more about some exciting updates Playa is unpacking. 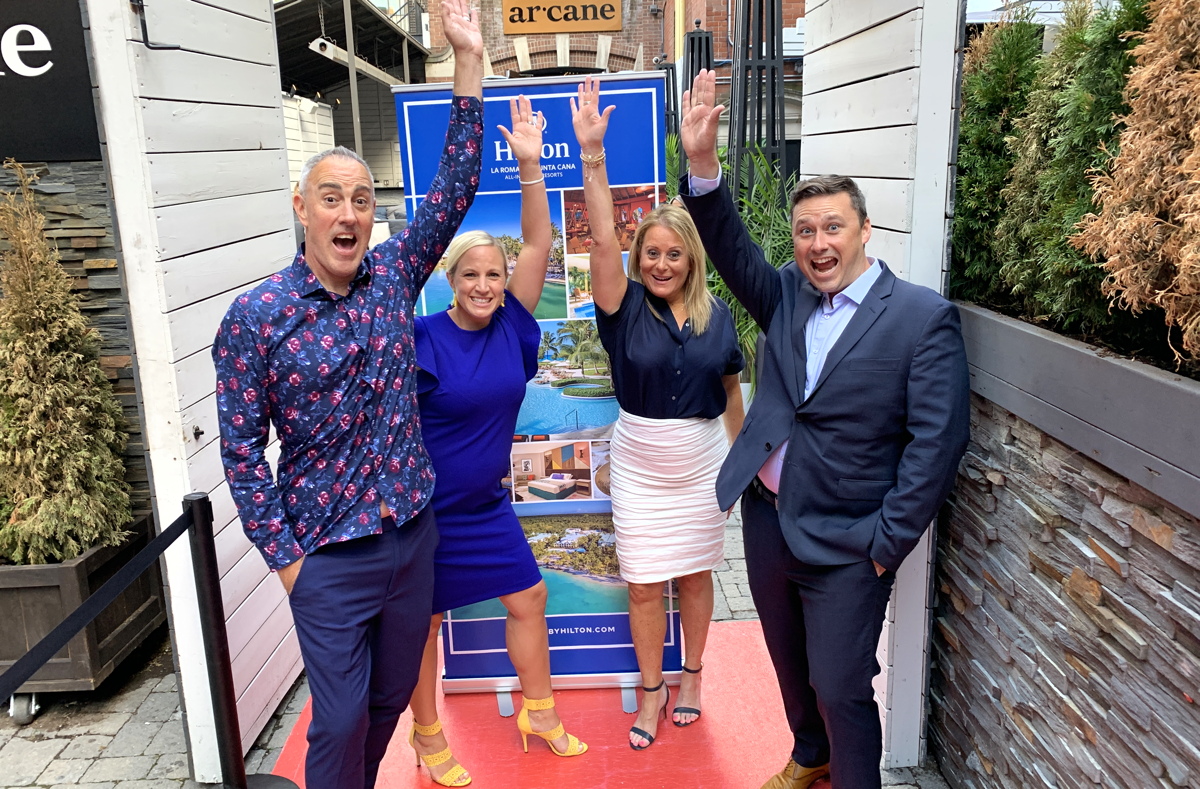 Off the bat, Playa has seen some major growth in recent years.

Five years ago, the brand had just seven hotels to its name, Cosentino told guests. Now, the luxury collection boasts 20, with properties in all the key markets: eight in Mexico, seven in Jamaica and five in Dominican Republic.

“There’s one common thread that links all of our brands, and that is our service,” Cosentino told PAX. “Yes, we’ll give you a beautiful room, you’ll have great food and drink. But how we make you feel...That’s our core strength.”

Dominican is the big push right now as Playa unveils five new (and newly-renovated) properties that are (or soon will be) taking the all-inclusive vacation market by storm.

The Hyatt Ziva and Hyatt Zilara properties in Cap Cana is, said Cosentino, “perhaps the most ambitious project we’ve endeavoured.”

Playa purchased the land (once a field of mangroves) and built the twin-resort property from the ground up.

“We’ve never done that,” Cosentino said, equating the whole project to the equivalent of giving birth to twin elephants. “We’re going to town on this one.”

The neighbouring U-shaped resorts have 375 suites and six dining outlets each and neither property has rooms that face back of house (only pool and ocean/beach views, depending on the floor).

Guests at both resorts can access a water park and lazy river, which is located back of house (“We didn’t want it to compete with views of the water, which is why it sits behind,” Cosentino noted).

An outdoor theatre and conference facility for MICE and wedding groups was also built, and the whole compound is just 15 minutes from Punta Cana Airport.

“Cap Cana is the Beverly Hills of the region,” Cosentino said of the gated DR region that spans 6,200 acres.

The resorts used to be one big Dreams property for families with a tiny section carved out for adults. When Playa got its hands on it, they cut the property in two, devoting half the land  to adults, and half to families.

The adults-only section (350 suites) was completed just a few weeks ago, whereas the family side (414 suites) will be completed this December 1st (hint, hint: they’re adding a waterpark).

Cosentino stressed how these renovations aren’t just about “changing the drapes and the bedsheets.”

“We’re spending the money, and I don’t mean a little,” she said, noting that guests will notice significant improvements to the properties' feel and functionality.

Then there’s Sanctuary Cap Cana, or what Amanda Morris calls, “The most beautiful resort I have ever been to.”

Having recently returned from the “five-star plus” adults-only property a few weeks ago, Morris praised its boutique-style layout, white sand beaches and unique architecture.

On top of all this, Playa is offering double AgentCASH+ points for its Dominican Republic resorts for new bookings made from now to December 15th, 2019, for travel through until the end of 2020.

The team also drew attention to another hot property, outside of DR, that’s getting the Playa treatment – the Hilton Playa Del Carmen.

Formally a Royal, the property was converted last year. The 513-suite resort (45 minutes from Cancun Airport) is undergoing renovations in phases, and will be completed by this December.

Playa’s property updates are bold and ambitious as Dominican Republic recovers from a tumultuous year stemming from a series of mysterious and highly-publicized deaths involving tourists at various resorts (none owned by Playa).

The headlines were enough to make Dominican’s tourist numbers take a dip.  However, recent stats indicate that Dominican Republic is on the rebound as its North American numbers climb.

“When the news first broke, we did see a slow down,” Cosentino told PAX. “The bookings are now coming back.”

Cosentino said Canadians, travel agents in particular, are resilient when travel patterns change as a result of unfortunate circumstances, whether it be hurricanes, diseases (ie: Zika virus) or destination-based crime.

“There’s always going to be something. That’s the world we live in today,” she said.

She advised agents to look at things realistically, “take stock of what’s going on,” and identify the measures that have been put in place.

“We’re going to get through this like all the other situations we’ve experienced,” she said.

For more info on Playa Hotels and Resorts, click here. 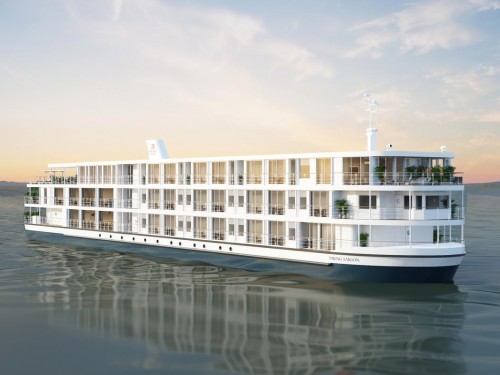 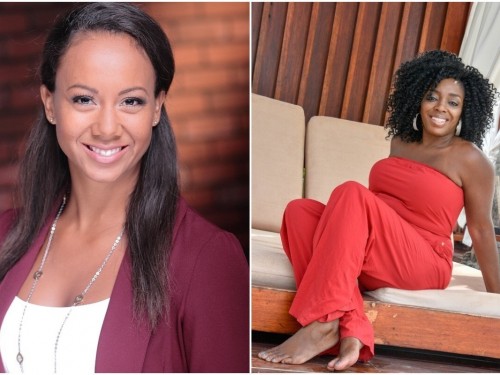