On Location: The new Sheraton Gateway at YYZ is now an airport hotel you’ll WANT to stay at

Wow-worthy, maybe. A location near an airport that allows one to flop down on a bed, grab a bite and charge a phone the night before an early-morning flight, or take refuge in when a flight is cancelled, can win the hearts of travellers faster than you can say “free continental breakfast.”

But let’s call airport hotels for what they are: convenient, practical and, in most cases, forgettable.

Is it possible to truly gush over – rave about – an airport hotel to the point of viewing it as a destination as opposed to a one-night stand?

In the case of the recent renovation of the Sheraton Gateway Hotel at Terminal 3 at Toronto Pearson International Airport (YYZ), the short answer is yes. 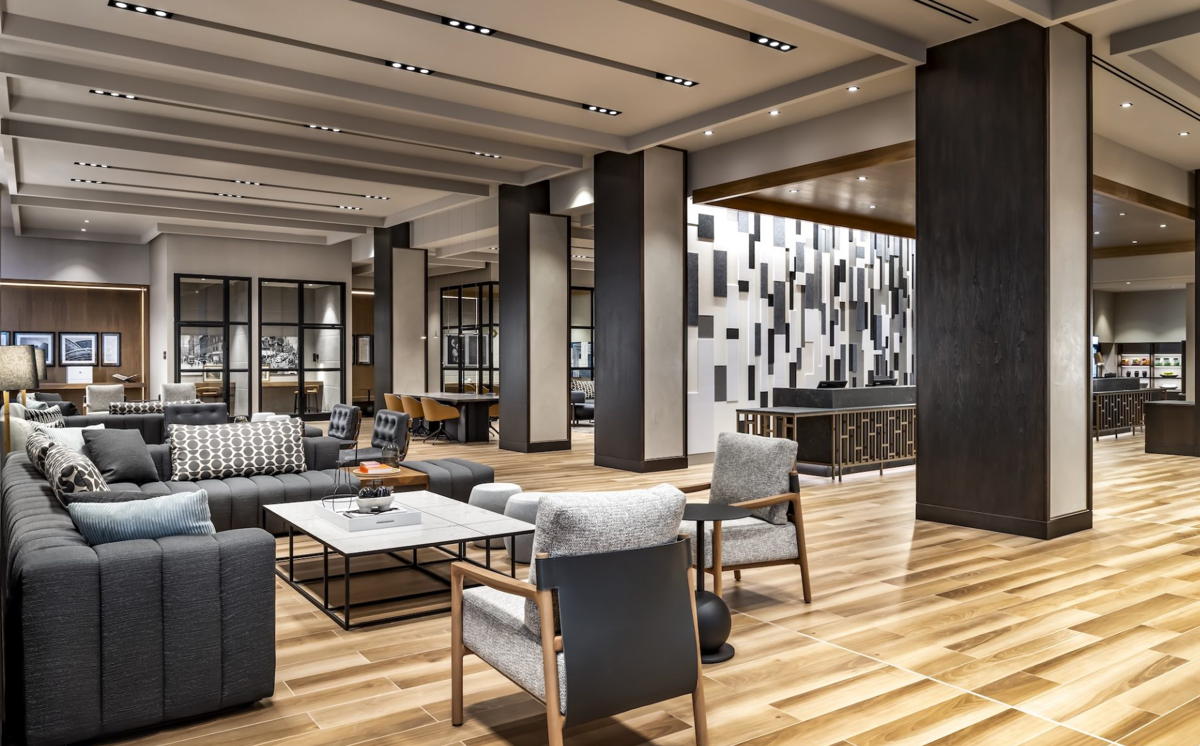 A $30 million-dollar project that was completed on April 1, the “new Sheraton” redefines the role of airport hotels in Toronto, debuting a fresh place of modern design, smart technology and warm style where one seriously might consider staying longer than one night.

As PAX observed during a visit to the 484-room hotel (which is connected to Pearson) in late April, long gone are the dark and heavy, cigar lounge-like wood and carpet elements that, for years, characterized the Sheraton ever since it was built in 1991.

Some thirty years later, and following two years of renovation work, the revamped Sheraton has been redrawn for today’s modern traveller and delivers a dramatically different hotel experience.

The contemporary and spacious lobby – situated away from the check-in desk, with light-wood flooring, grey sectional sofas, patterned pillows, comfy chairs and stools, and backlit gallery shelving peppered with vases, books and artwork – is a space you’ll want to sit in. 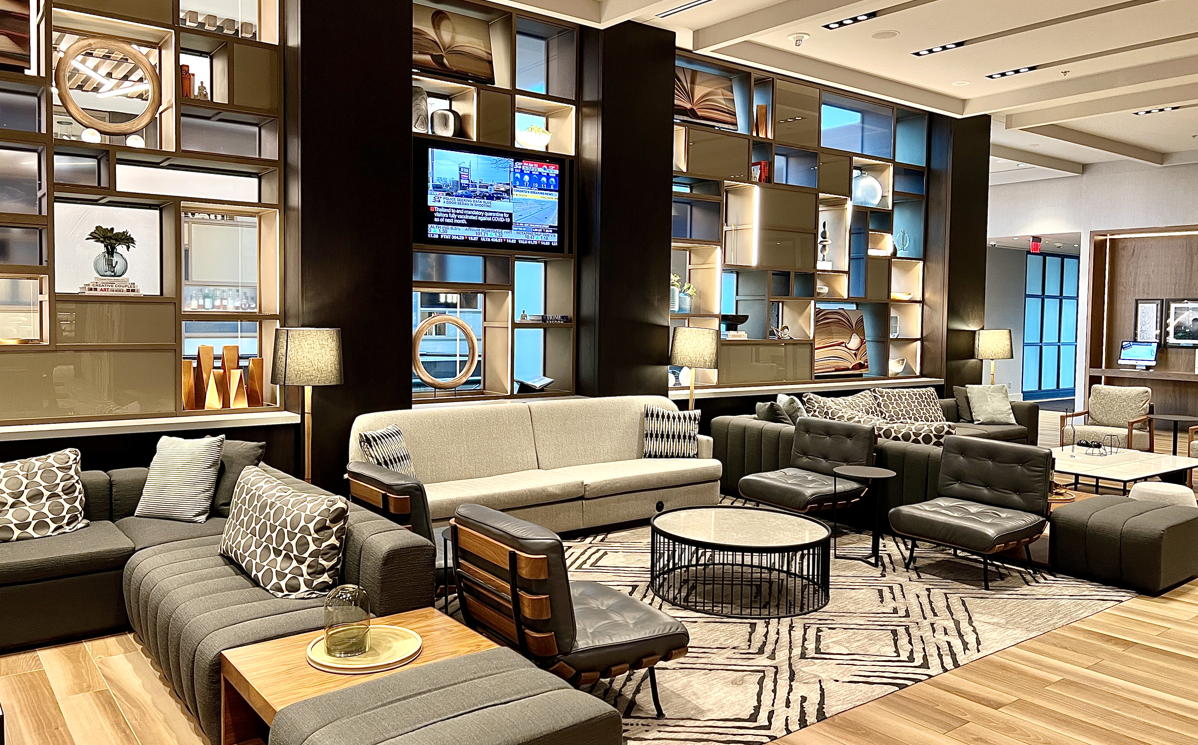 And that, as Amanda Nichols, global brand leader at Sheraton Hotels and Resorts, later told PAX, is what returning guests will likely notice first.

“People will feel like they should be spending time there,” Nichols said. “That’s what feels different. Previously, it felt transactional. As if you should be moving through the space.”

With cool hints of Scandinavian influence, the redesigned lobby invites travellers to snuggle into a seat, work for the day, meet colleagues and acquaintances or, perhaps, meet somebody new.

This invitation “to connect” was inspired by the concept of a public square, Nichols explained, and it’s also a nod to Sheraton’s mission to be “the world’s gathering place.” 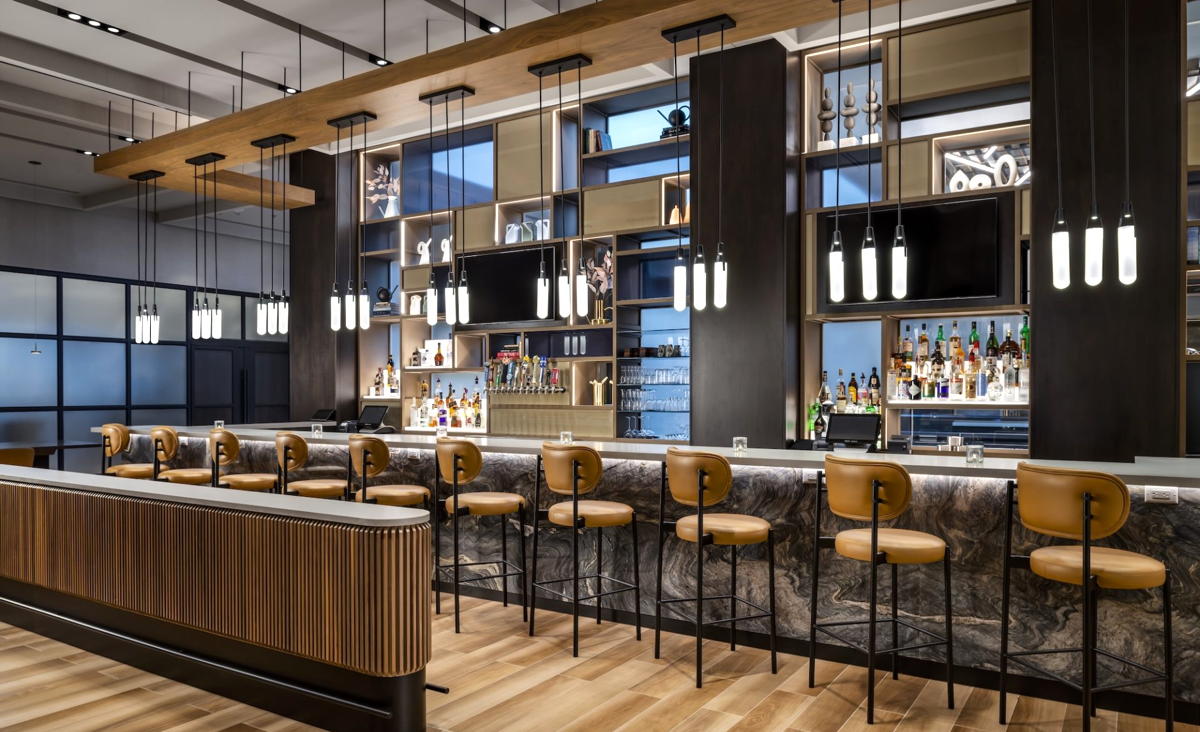 It’s a timely mission, too. While the metamorphosis of Sheraton began in 2017 following the Marriott-Starwood acquisition, the COVID-19 pandemic, if anything, has propelled the rebrand, accelerating its relevancy in a completely transformed marketplace.

After more than two years of social distancing, lockdowns and travel restrictions, consumers now feel different about – and, perhaps, place more value on – their connections with others.

“The need to gather, come together and see people is stronger than ever,” Nichols said. “When I look at the design strategy we developed, and the way consumers are responding to it now, it tells us we were spot on.” 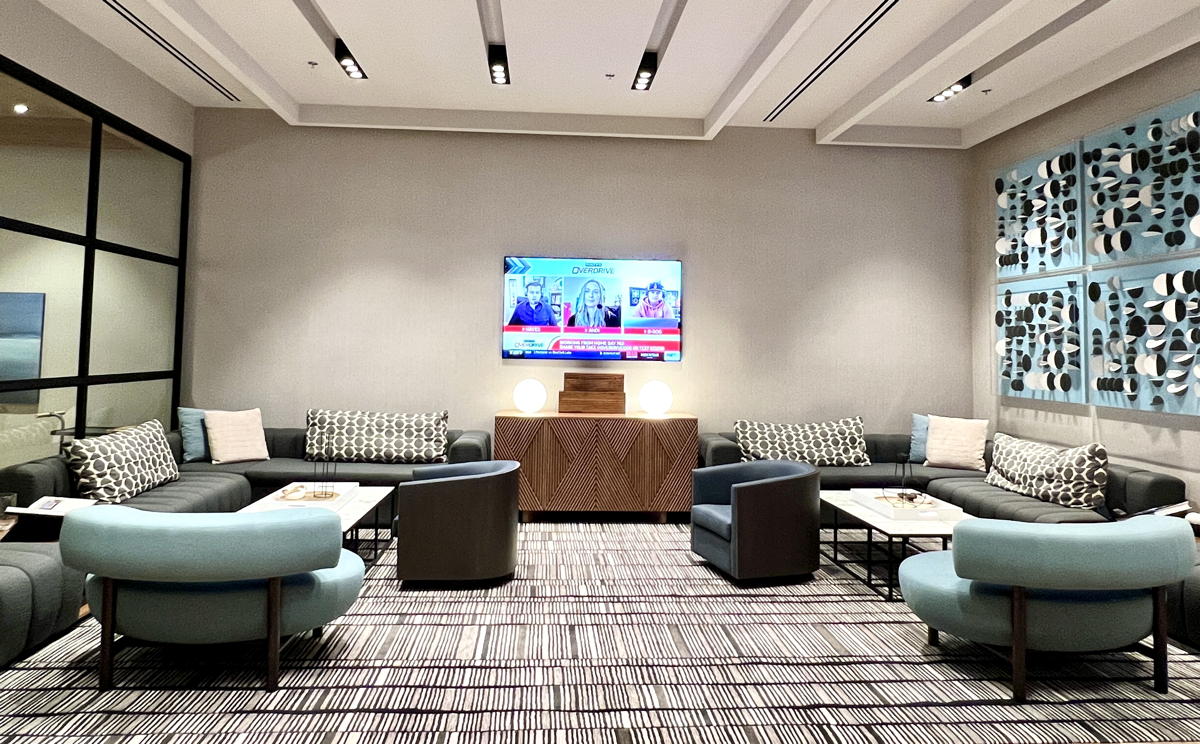 This vision to create a “community hub” for travellers extends beyond the Sheraton Gateway.

Two other flagships in Canada have also undergone facelifts, debuting similar makeovers – this being the Sheraton Centre in downtown Toronto and Le Sheraton Montreal Hotel in Quebec.

Sheraton Laval, too, unveiled slick renovations in 2019 and, together, these Canadian locations join a growing number of Sheratons around the world – a list of nearly 50 properties – that will be renovated by year’s end.

The upgrades on display at Pearson’s Sheraton Gateway hotel, however, are unique.

The property, notably, is the first and only Sheraton in Canada to undergo a complete top-to-bottom transformation, which included design and furniture re-dos in every room and suite. 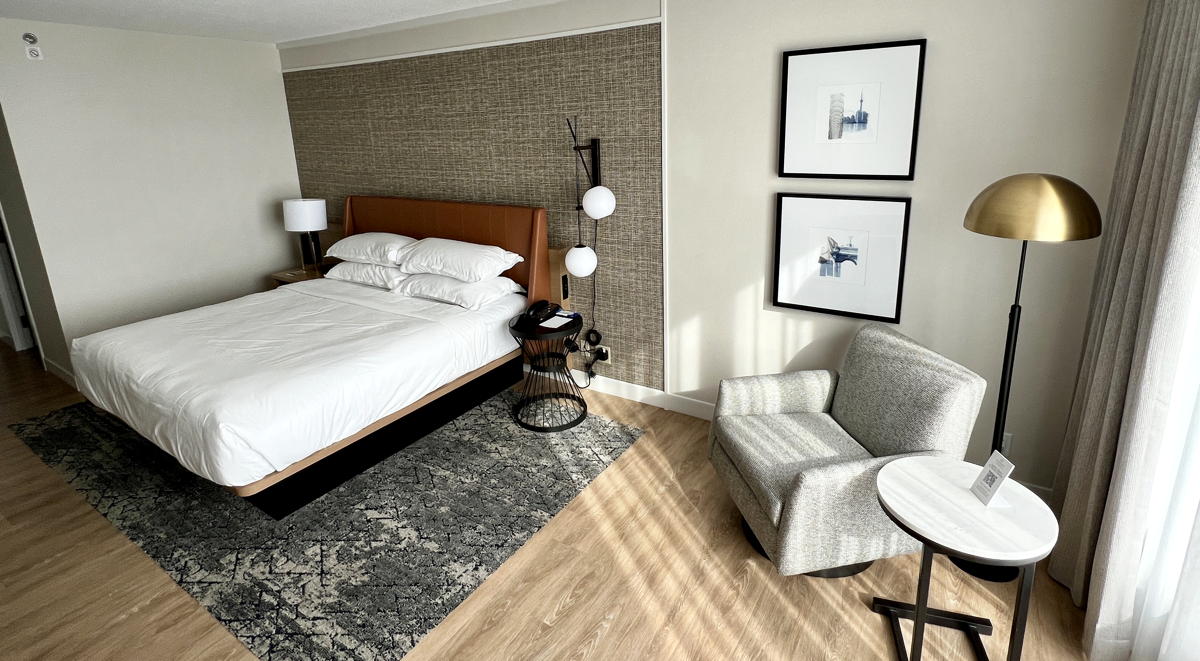 Many of these rooms, by the way, have views of Pearson’s runway, allowing guests to watch planes take off and land from the comfort of their own space.

The rooms also have triple-paned soundproof windows, so there’s no need to worry about jet engines waking you up at all hours of the night.

“Everything was done with the traveller in mind,” Andrea Jaikaran, the hotel’s dual marketing manager, told PAX during a site inspection.

Within and beyond the lobby, there are board rooms (which are more like trendy hangout nooks that could pass as vignettes plucked from the pages of House and Home magazine).

These homey “studios” can be reserved in advance, for a fee, and food and alcohol service can be added to the booking, marrying the worlds of productivity and enjoyment. 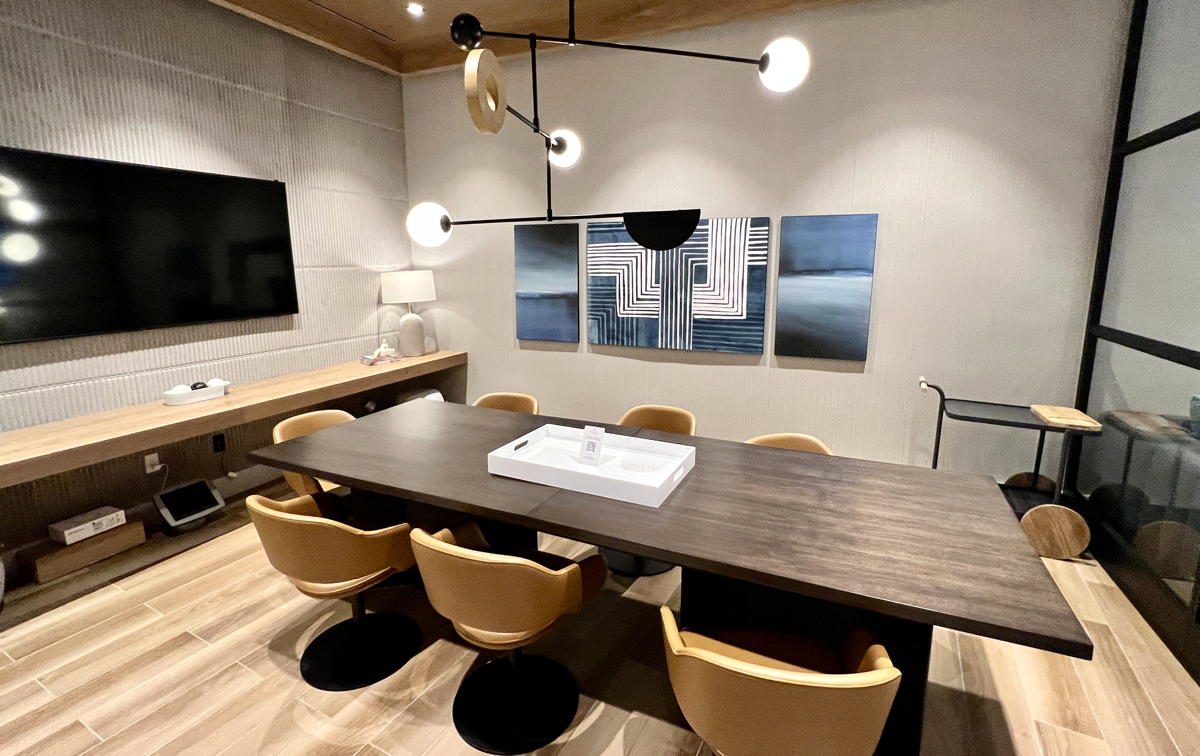 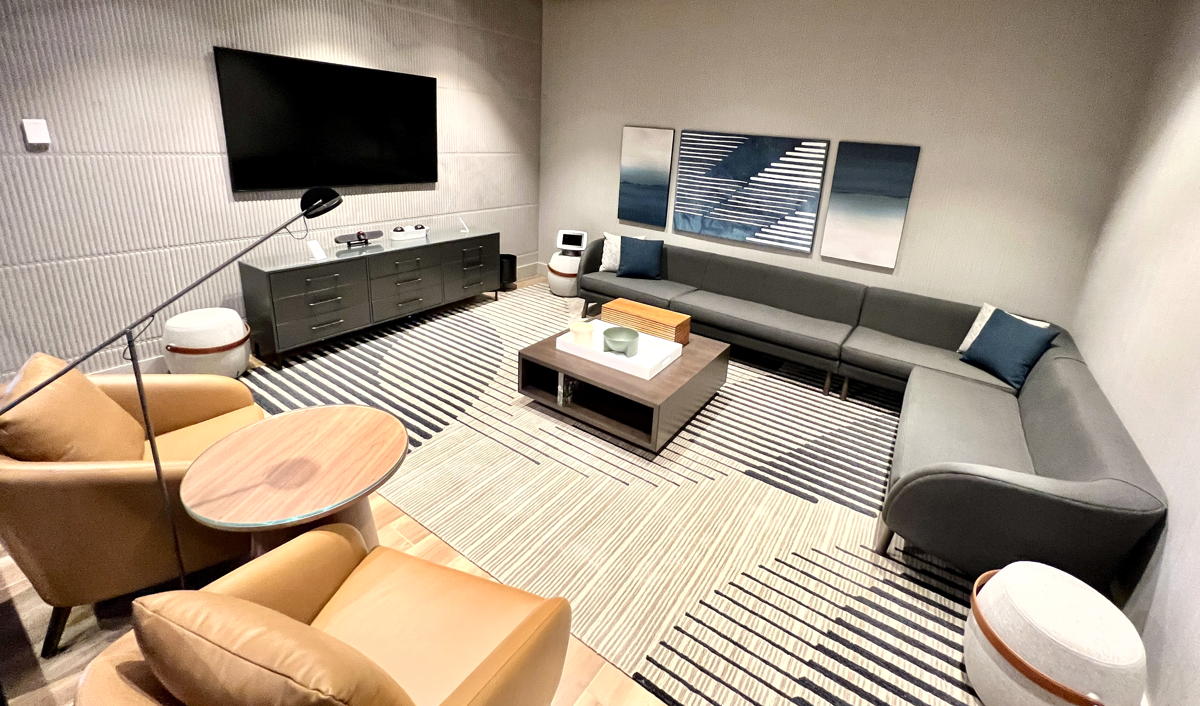 When you think about it, there aren’t any nice places at Terminal 3, pre-security, to sit down and chill.

For work teams (or any group for that matter) looking to gather, pre-flight, these comfortable and exclusive rooms – which come with all the audio/video fixings – are a new and creative option to explore.

There are also private, sound-proof “phone booths” in the lobby for those who need a quiet place to work. 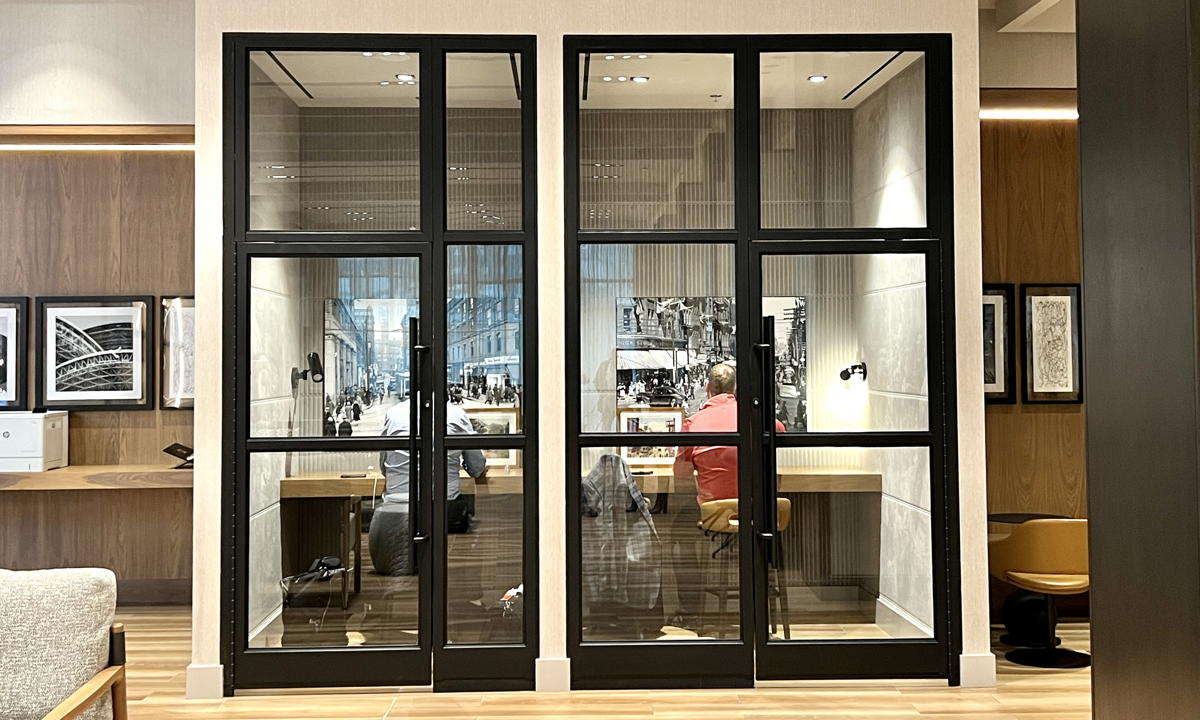 Yet both of these amenities – the studios and work booths – are still connected to the action of the hotel thanks to glass walls.

“You can be away from the hustle and bustle, but still feel part of it,” as Jaikaran explained.

The vibe of feeling connected also extends to the lobby’s tech setup. There are power outlets everywhere – including in the sofas, where plugs have been imbedded – so guests can keep their computers and phones charged at all times. 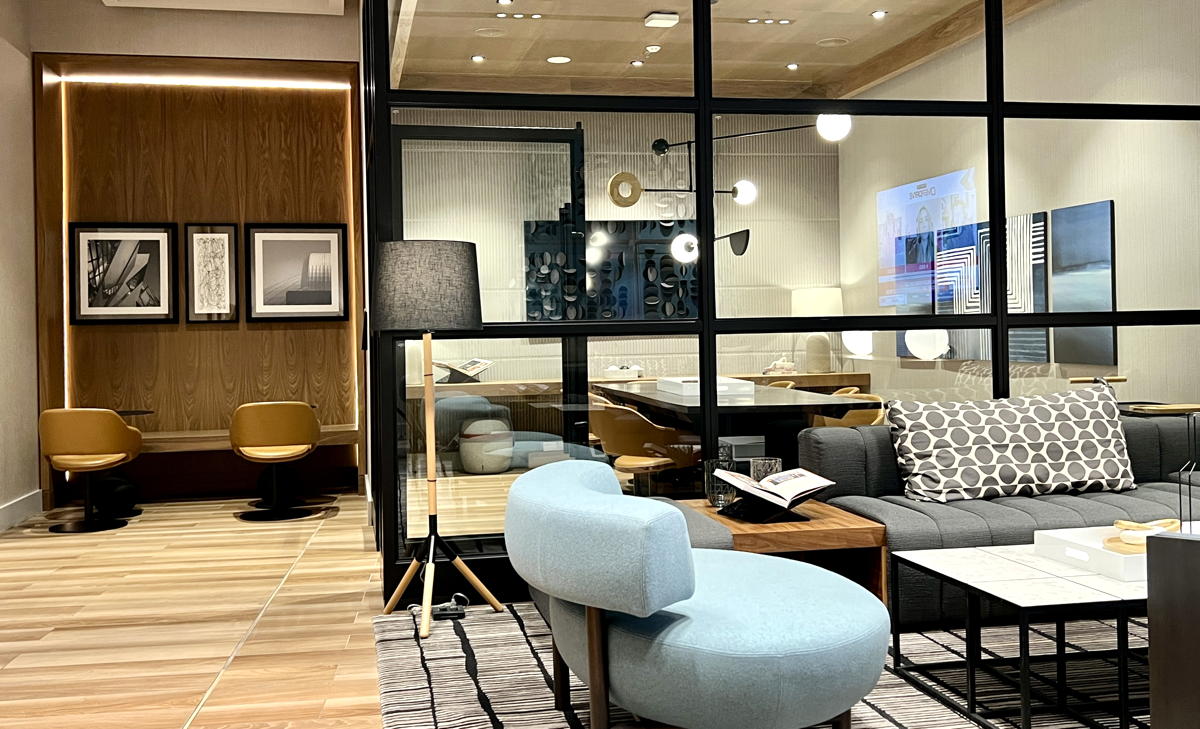 The swimming pool and 24-hour gym at Sheraton Gateway remain untouched, but there’s now a Peloton studio under construction, so guests with accounts can break a sweat, before or after take off. 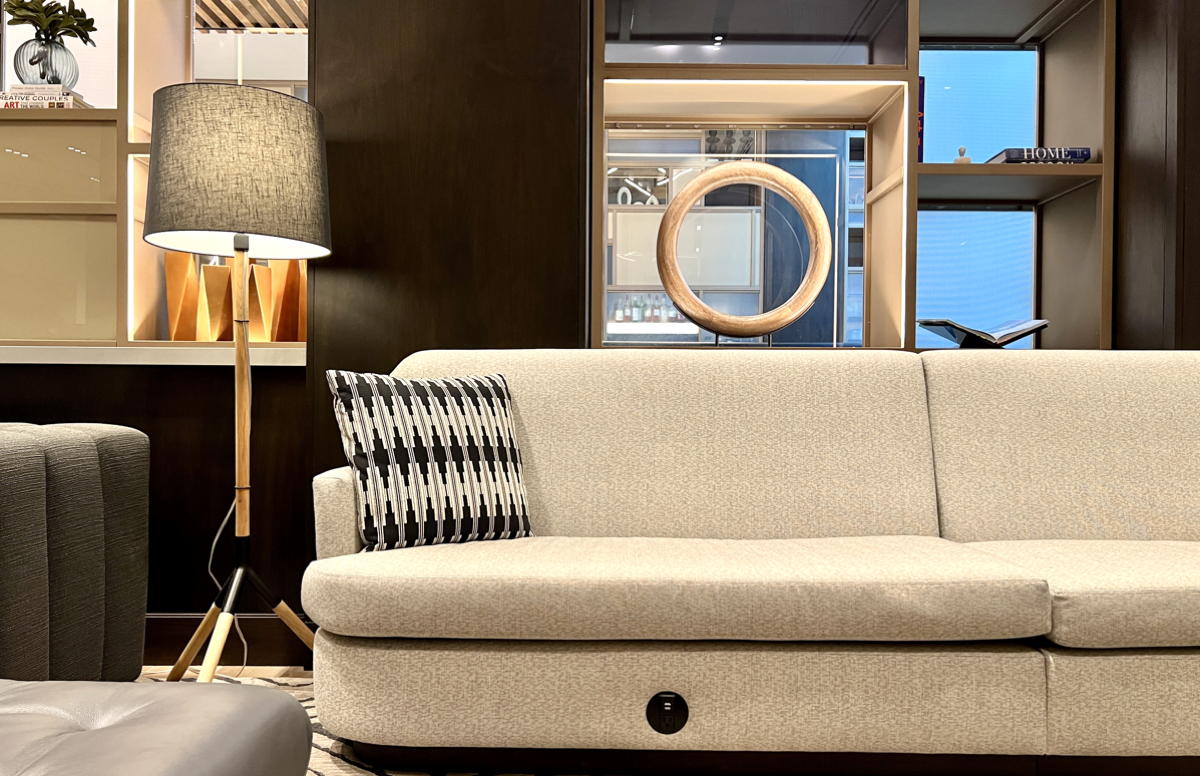 The lounge before the lounge

The hotel’s food and beverage experience has also been elevated.

The redesign extends to &More by Sheraton, the brand’s bar, coffee and restaurant concept, located around the corner from the lobby. The space, post-reno, is now modern and upscale.

The QR code-enabled menu, with items such as bam bam shrimp, taco bao, pizza and delightfully Canadian fare, caters to the wants and needs of Sheraton clients, which range from business types incorporating leisure into their trip to those who simply appreciate upgraded stays. 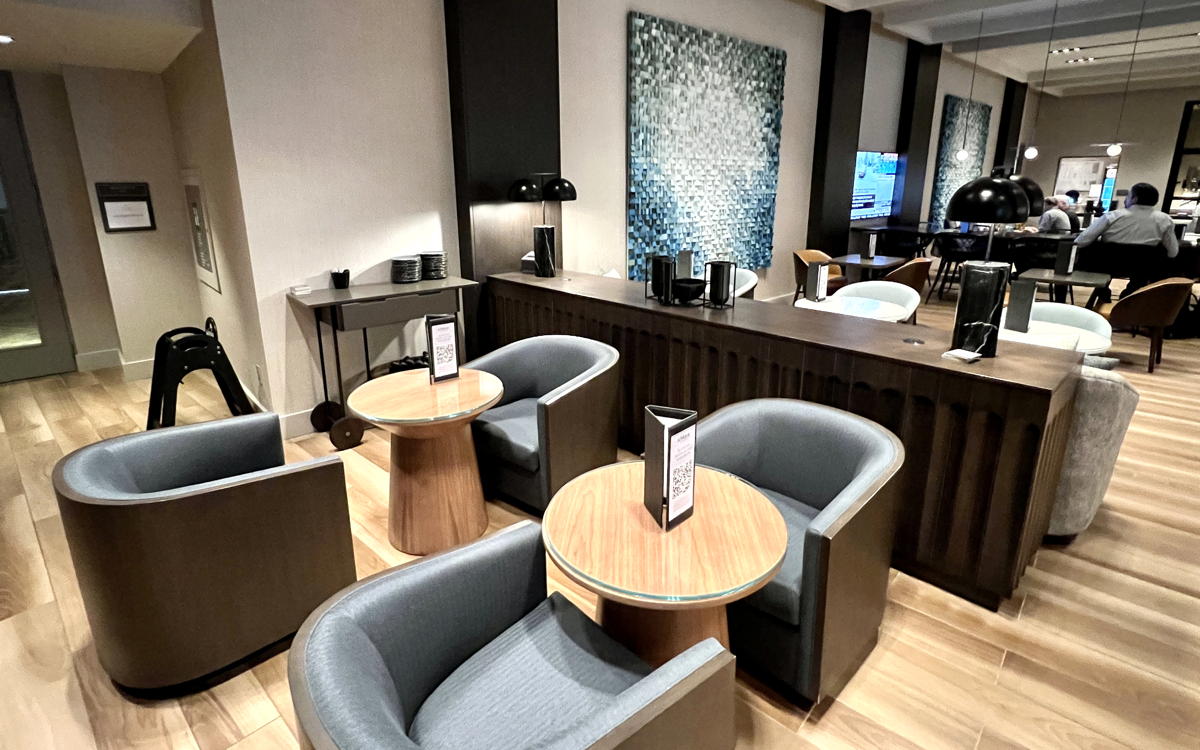 But it’s the hotel’s new and improved Sheraton Club that really steals the show.

Marriott Bonvoy members enjoy the advantages of this lounge, which comes with complimentary breakfast, all-day snacks, beverages (like Starbucks coffee) and free Wi-Fi.

It’s also an upgrade option that guests can purchase (the price, which is dependent on various factors, ranges from $100 to $150). 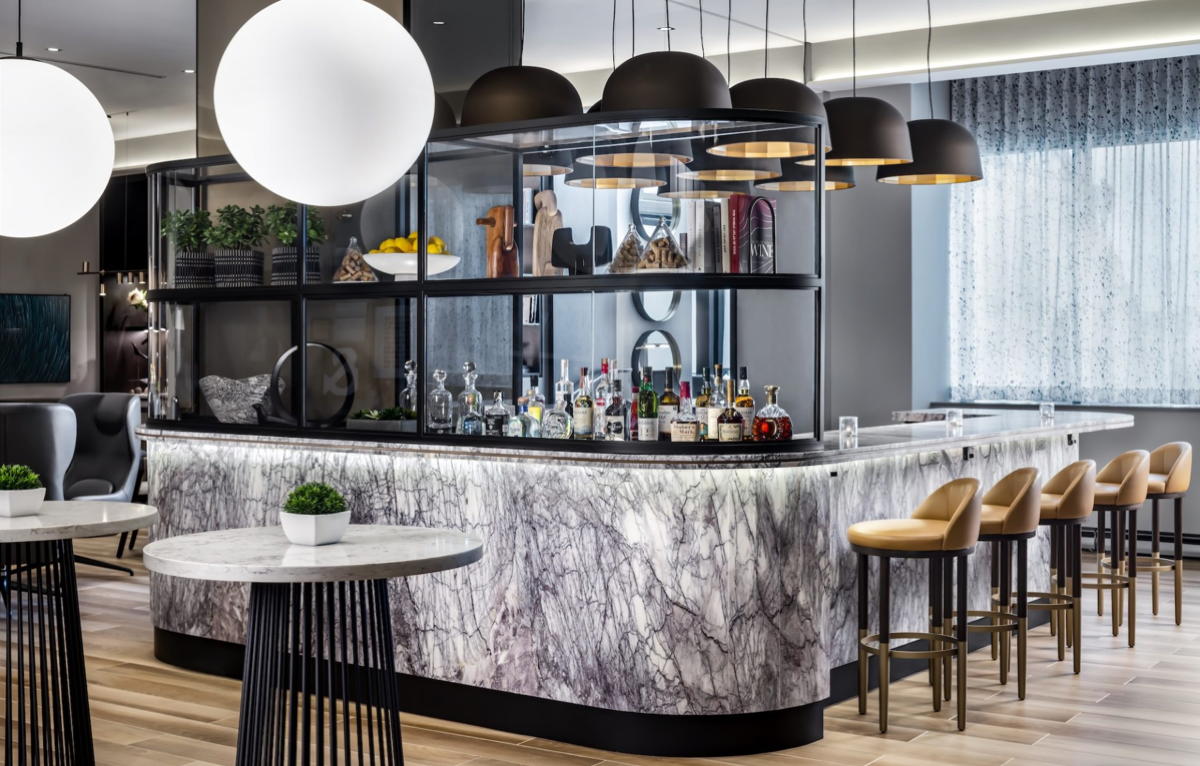 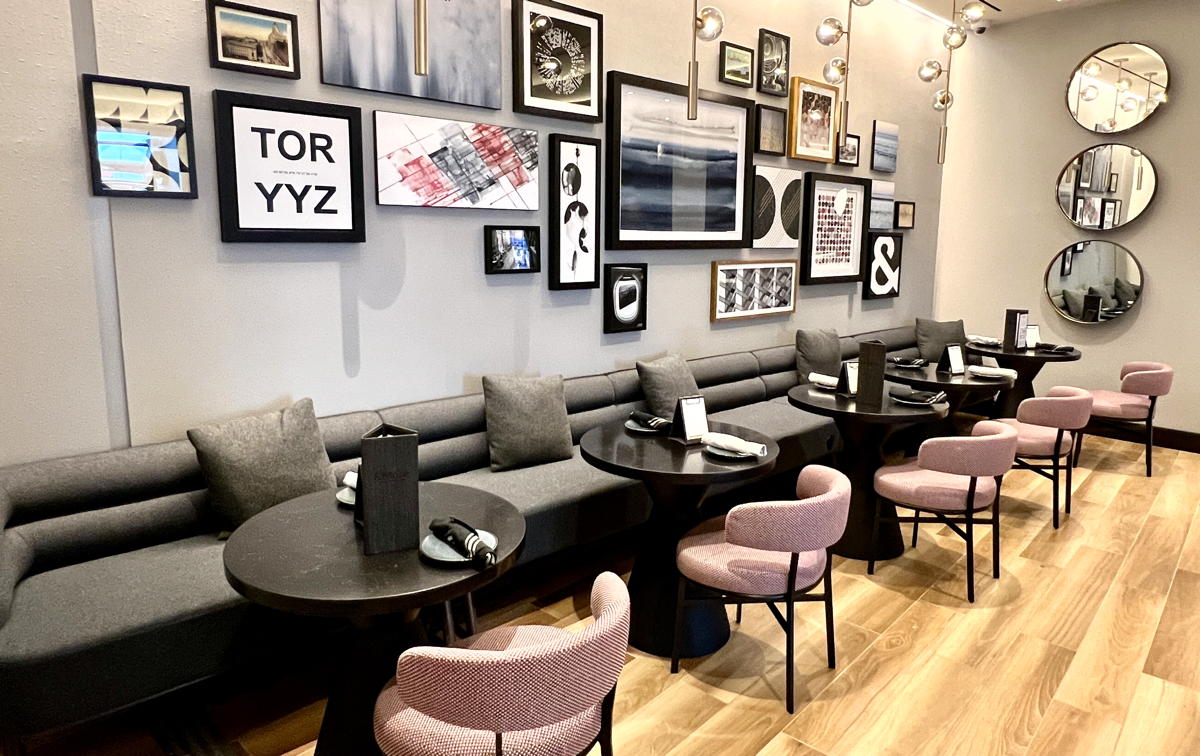 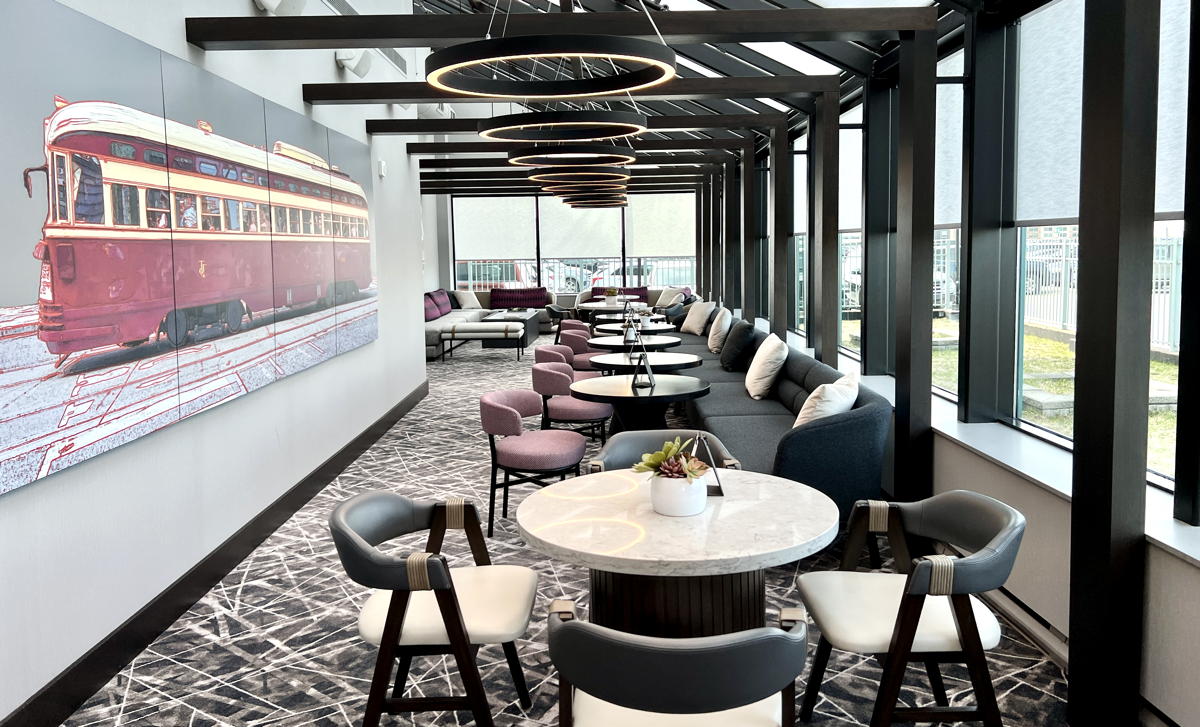 The lounge at Sheraton Gateway, previously, sat on the seventh floor, and was gaining in popularity, pre-pandemic. Now, it’s on the main level, completely revolutionizing the space that was once occupied by The Grill.

Classy, sophisticated and decorated with Toronto-inspired art (such as images of TTC streetcars), this bright and impressive space is a luxurious haven away that can bookend a trip – either pre or post-flight. 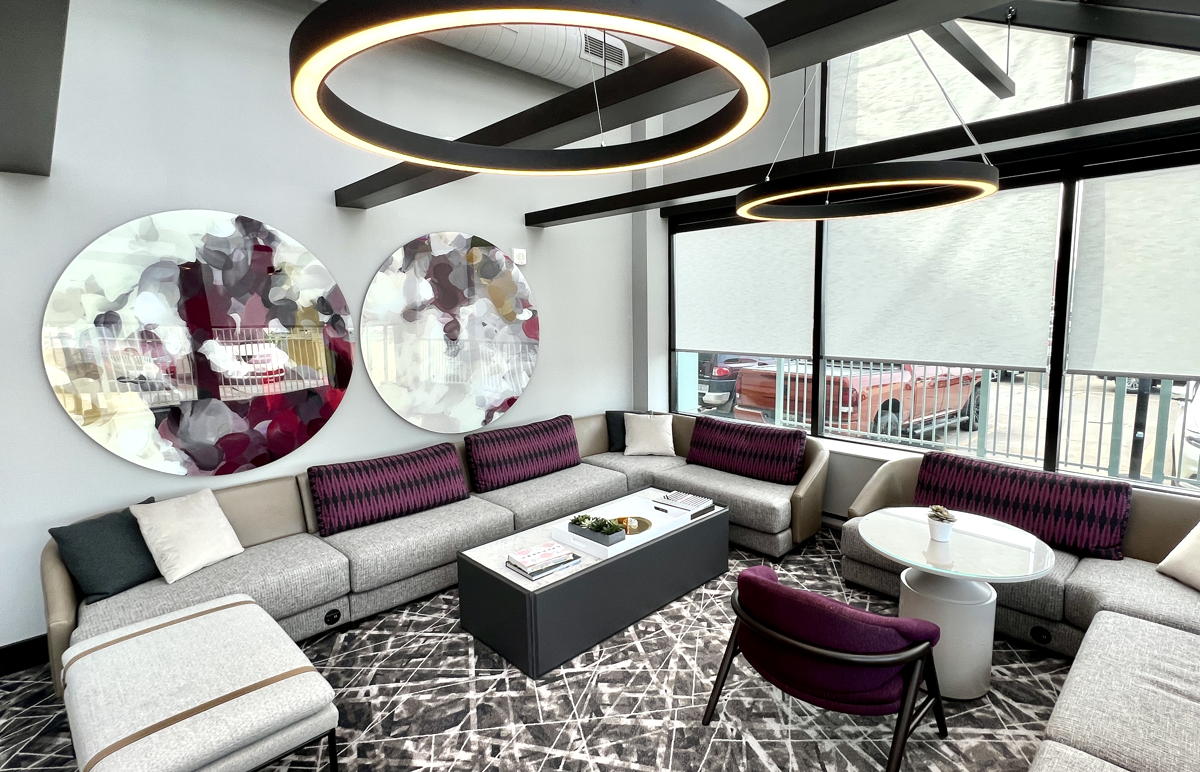 With its own bar, dedicated mixologist and attentive wait staff, the lounge feels seductively exclusive, and guests who don’t buy into the option may experience a little FOMO – there’s a window separating the lounge from the main lobby, allowing sneak peeks into the sexy space, which may prompt some to think: “Ugh, I should have got the upgrade.”

With day passes available to non-Sheraton guests, the Sheraton Club may very well be the new go-to spot for luxury-minded travellers who arrive at Pearson early. It's the lounge, before the lounge.

The reimagined Sheraton Gateway now offers what most airport hotels can’t: an experience.