Each week since March, Freed has been hosting virtual coffee dates for travel agents, to keep them entertained, motivated, and inspired as restrictions ease. This week, Freed's guest was Richard Fain, CEO, Royal Caribbean Group.

According to Freed, this week, she received more than 500 questions from travel advisors.

But the most important one?

"When is Richard going to cut his hair?" Freed read aloud to attendees.

Sure enough, moments later, an image of Fain's hairdos over the course of the pandemic popped up. 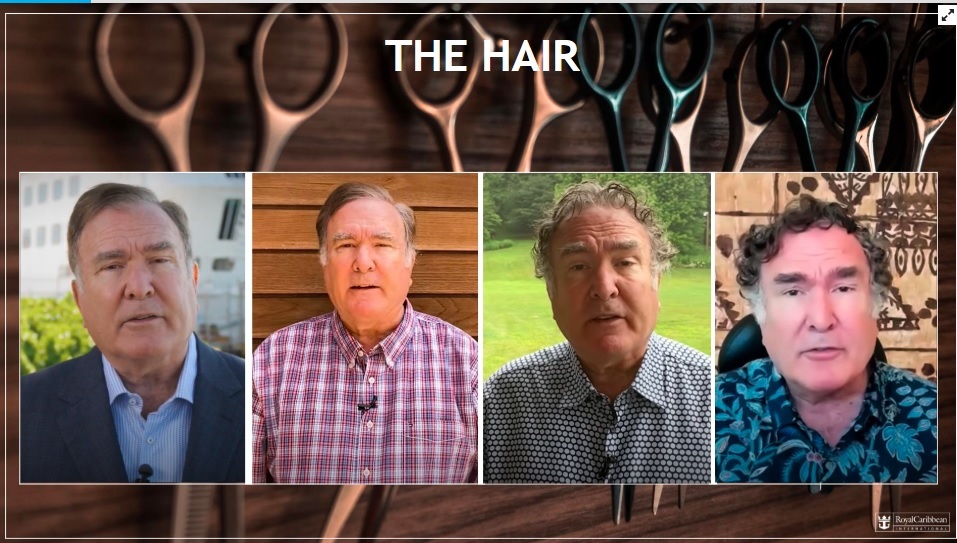 Light-hearted humor aside, this week, together, Fain and Freed shared several important updates with attendees, including more details on the recently-announced Healthy Sail Panel, Fain's predictions on restart times for the cruise industry, and the company's details of its acquisition of Silversea Cruises.

On July 10th, the Royal Caribbean Group announced that it had acquired the remaining shares of Silversea Cruises and now owns 100 per cent of the luxury cruise line.

"We acquired two thirds of it two years ago, and in light of all that's going on, we had the opportunity to buy out the other one third," Fain said. "We think it's a good investment, and we think Silversea is a good addition to our portfolio of brands."

As it stands, Royal Caribbean is still not operating anywhere in the world.

"The uncertainty is very painful for everybody, and I think oftentimes most of us would prefer bad news to 'we’re not sure'," said Fain. "Uncertainty is very difficult. Travel, tourism and the cruise industry will be at the tail end of recovery, but we’re beginning to see signs of real progress."

This month, the Royal Caribbean Group has recently started selling cruises to Germany.

"It wasn’t that long ago many of us couldn't imagine operating in July," Fain shared.

One thing that has helped kickstart some of the recent progress, is the establishment of the Healthy Sail Panel, in partnership with Norwegian Cruise Line.

"I'm encouraged about the workings of the panel that we and NCL have orchestrated," Fain said. "It’s a real joy to watch the crème de la crème focus on powerful solutions."

Rather than creating a standardized COVID-19 response plan, Fain says the uniqueness of this particular toolkit comes down to understanding the special features of s ship, and recognizing that a solution isn't just "one size fits all."

"A key factor will be how quickly we are successful at bringing the prevalence of it [the virus] as a society, down," Fain said. "Everybody needs to continue to be cautious and think about how we’re going to manage through the crisis, and how we’ll manage our business when the crisis is over."

So, why a partnership with NCL, instead of some of the other cruise lines?

According to Fain, after calling several other cruise line CEOs to let them know of his plan, he learned that NCL's CEO Frank del Rio was also looking at creating a panel, with one of the individuals Fain was interested in hiring to do the job.

"We realized that we would be more powerful together, and it really has been a wonderful experience," Fain said.

Freed shared that the average hold time is currently 15-20 minutes for groups, and the company is actively trying to keep those down.

Freed also shared that the company is all caught up with its FCCs: it takes 30 days to process an FCC, with an average refund of 23 days.. She also shared that there are approximately 1,000 bookings over 30 days waiting for a refund, all of which should be processed by July 19th.

Where are all the ships?

According to Fain, 97 per cent of Royal Caribbean's fleet is home. The remaining three per cent are still at sea, with approximately 40,000 crew on board.

These individuals are still awaiting repatriation to their home countries, but cannot leave the ship until local governments and stakeholders deem it safe to do so.

"This is something that's been very painful for us, and it's been horrific for the crew members who are stuck and haven't been able to get home," Fain said. "Ninety-seven per cent of our crew are now home with their loved ones; it's been a massive effort. The people who are remaining are mostly from two countries which have set severe restrictions on allowing anyone to come into the country, even their own citizens. The crew have been amazingly understanding, and it's hard to imagine how difficult it is for them to be away from the people they love for so long. You feel a bit powerless." 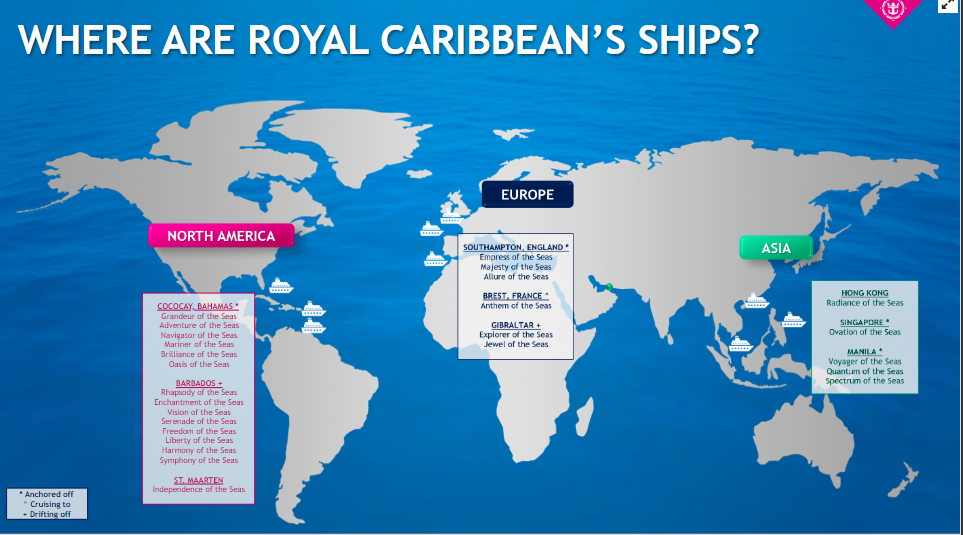 At the height of the pandemic, Royal Caribbean was tasked with repatriating its crew members from 120 countries, each with their own set of evolving restrictions.

Royal Caribbean's ships are currently spread out around the world, but "are ready and anxious to come back, and we're making sure that when we have the opportunity to do so, we will be able to do so as quickly as possible," Fain said.

There are also currently no plans to sell any of the ships in the Royal Caribbean fleet, though "there are considerations," Fain hinted.

"We will look at that on a somewhat opportunistic basis," Fain said. "The one exception would be the pulvator ships which are now in the process of being sold. As for the rest of the fleet, we'll be looking for selected opportunities, but our fleet has been consistent with very large and very modern vessels which were ahead of their time even when they were built."

Will these new protocols change the cruise experience?

Social distancing on board, for example, could mean that the overall guest capacity must be reduced, or public spaces, like restaurants, will be forced to put a cap on their numbers.

Financially, Fain admits this could pose a challenge.

"It is likely that when protocols are implemented, at least in the beginning, the capacity in the ships will be reduced," Fain said. "Obviously, it's harder to make money with fewer guests on board, and historically, our industry has operated at very high load factors. The economics are not as good...but because the variable costs of a cruise are relatively small, we don't need the same kind of load factors to reach break even levels."

Fain added that it's likely the company will start out at lower capacity. In Europe, for example, the load factor is currently 60 to 70 per cent.

Tune in next week!

When the pandemic struck, travel advisors found themselves at home, no longer networking or conducting site inspections onboard Royal Caribbean's ships.

Freed was looking for ways for her and her sales team to be present for travel professionals, to give them a forum where they could ask questions.

"Coffee Chat with Vicki began as a training module, but over the course of the last few months, it grew into a weekly event with one special guest every week, talking about topics as varied as food and beverage (last week with Linken D’Souza, Royal Caribbean's VP of culinary, dining and beverage), or entertainment (the week before with Nick Weir, Royal Caribbean's VP of entertainment, etc.), revenue, marketing, customer service, etc.

And of course, there’s always a portion of the call dedicated to questions from travel advisors.

Travel advisors are invited to register in one of the following ways: