The Crystal Cruises saga continues after Crystal Serenity and Crystal Symphony – two luxury ships that have been hiding out in the Bahamas for weeks now – were seized by U.S. marshals and taken into custody over the weekend, according to reports.

Last month, Symphony, which was supposed to dock in Miami on Jan. 22, re-routed to Bimini in the Bahamas to avoid facing an arrest warrant that would have resulted in the ship being seized had it docked in Florida.

The warrant, signed by a federal judge in Miami, stems from a lawsuit filed by Peninsula Petroleum Far East, which claims that Genting Hong Kong (parent company for Crystal Cruises and Star Cruises Limited) owes $3.4 million in unpaid fuel costs ($1.2 million of which is linked to Symphony).

As such, passengers on board Symphony ended their cruise on a ferry, which transferred passengers from Bimini to Fort Lauderdale.

Then, not long after, Serenity, on Jan. 31, joined Symphony in Bimini after the ship was turned away in Oranjestad, Aruba’s capital, for reasons that are unclear.

READ MORE: "We are devastated": Crystal suspends cruises through May amid financial trouble

Passengers on board Serenity were again re-routed to Bimini, from which they were transferred Port Everglades, Florida via ferry service.

"It was actually quite expected"

The sudden and quick offloading of passengers reportedly left some customers standing in long lines for the ferry and buses, forcing many to make last-minute travel arrangements to get home.

“Five hours in, we get off the ferry only to find all the luggage dumped everywhere, colors and numbers NOT together, luggage falling down, no porters and NO CRYSTAL REPS. NONE,” Serenity passenger Allyn Jaffrey Shulman wrote on Facebook. “No one giving instructions. No one helping the older folks. It was a shameful sight.”

By the time Serenity and Symphony were seized on Saturday, only crew members were left on board, according to Cruise Law News, which first reported the story.

It remained unclear how U.S. officials had the authority to seize the two ships in the Bahamas, Cruise Law News reported.

However, "it was actually quite expected," as Symphony's Captain said in an announcement to the crew at the time, which can be heard here. 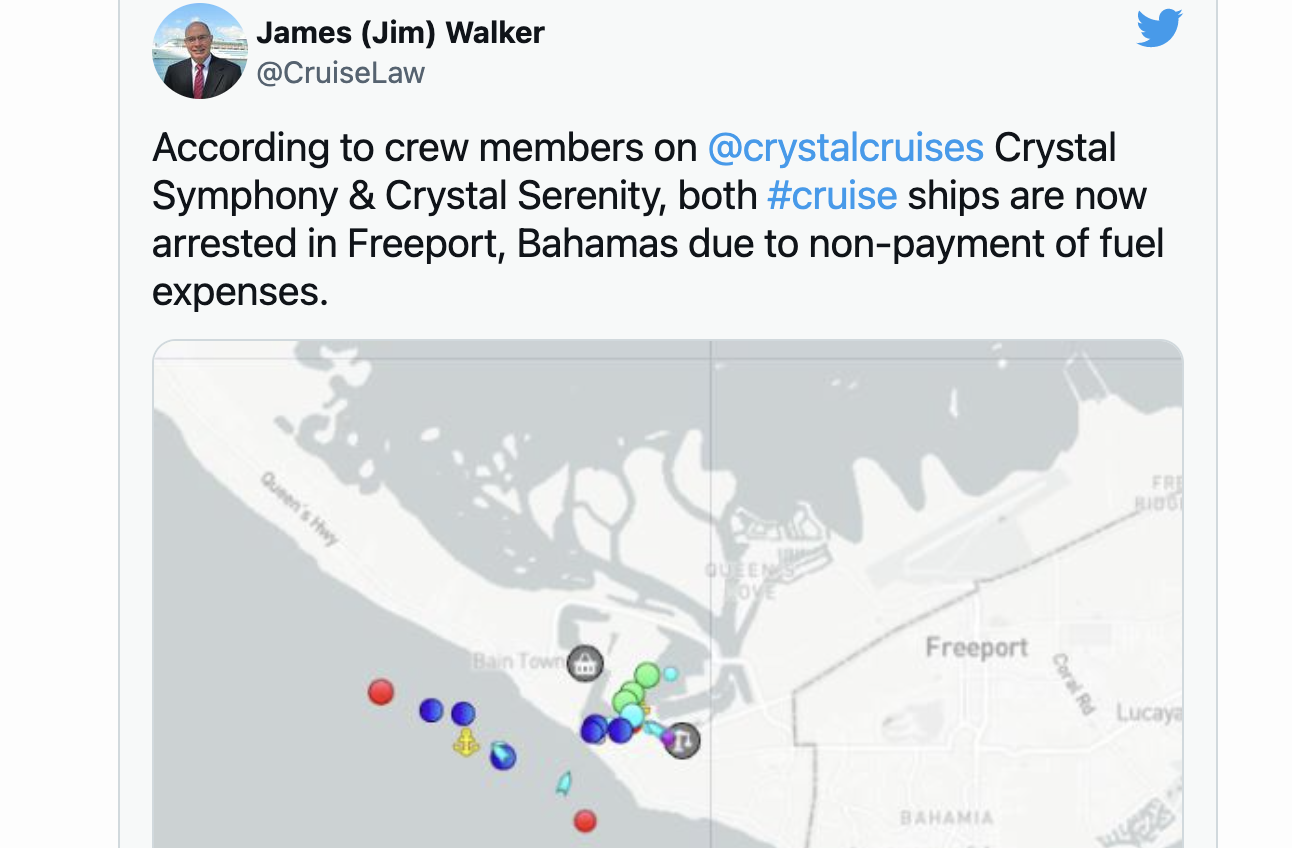 The last ship standing in Crystal’s fleet was Crystal Endeavor in Antarctica, which completed its itinerary on Friday (Feb. 4) in Ushuaia, Argentina, where it’s believed it also faced legal trouble from maritime authority over an unpaid bill.

Seatrade Cruise News, however, has confirmed that Endeavor resolved its issue in Ushuaia on Saturday night and was allowed to sail to Montevideo, Uruguay.

Last month, Crystal's Jack Anderson, interim president and CEO, announced that Crystal would be suspending all future ocean sailings through April 2022, as well as river cruises through May, as the team works through the financial situation.

“Like you, we are devastated by this action, but it is the most prudent decision in this current business environment,” Anderson wrote in a letter to partners.