More than 350 aviation workers rallied at Toronto Pearson International Airport (YYZ) on Friday morning (Oct. 30), calling on the Canadian government to safely restart the country’s ailing aviation sector and support the employees who run it.

The demonstration, held outside on the departures level at Terminal 1, drew pilots, flight attendants, traffic controllers, airport staff and others, both in and out of uniform. 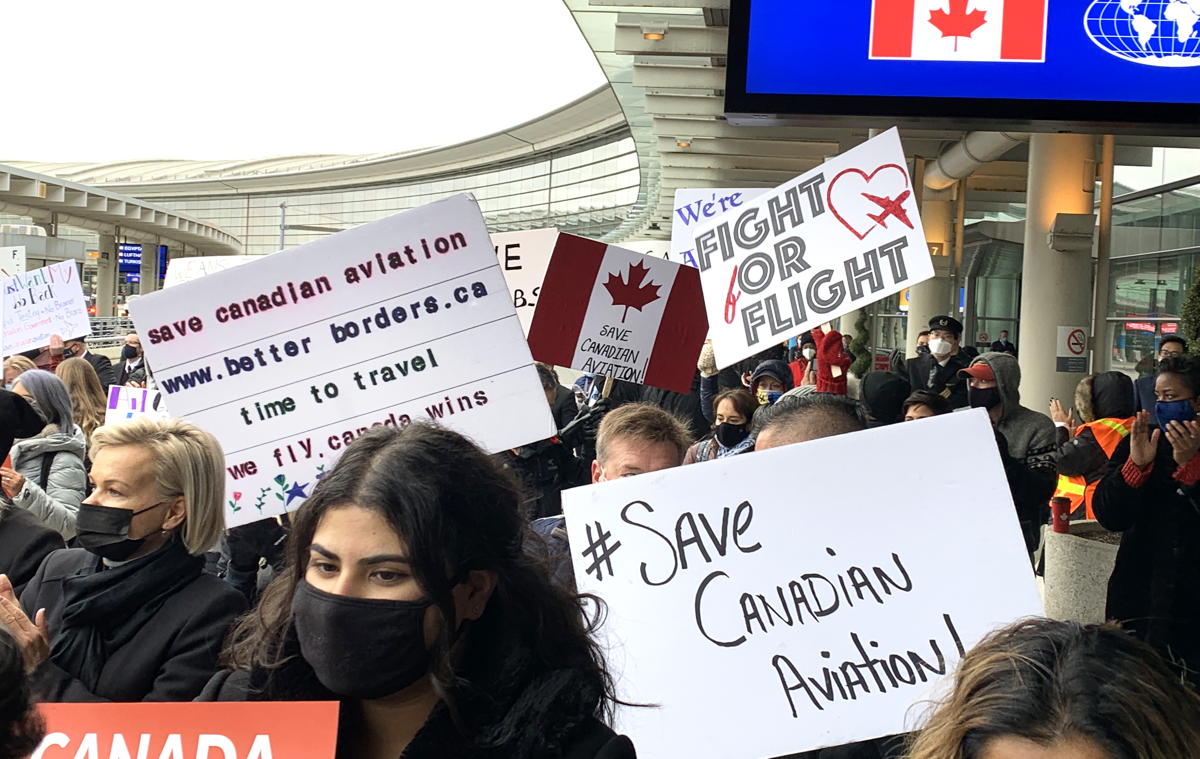 Holding signs depicting messages such as “Canada Needs An Aviation Recovery Strategy,” "Make Aviation Great Again," “Fight or Flight,” and “Mayday Mayday Mayday,” the vocal crowd aimed their frustration at the Trudeau government for stalling on a recovery plan.

“We’ve heard nothing but talk,” Barret Armann, a Sunwing pilot and president of Unifor Local 7378, told PAX in an interview prior to Friday’s rally. “We answered the call to bring Canadians home in March and the [federal government] promised to assist us.”

“They have literally kicked us to the curb.” 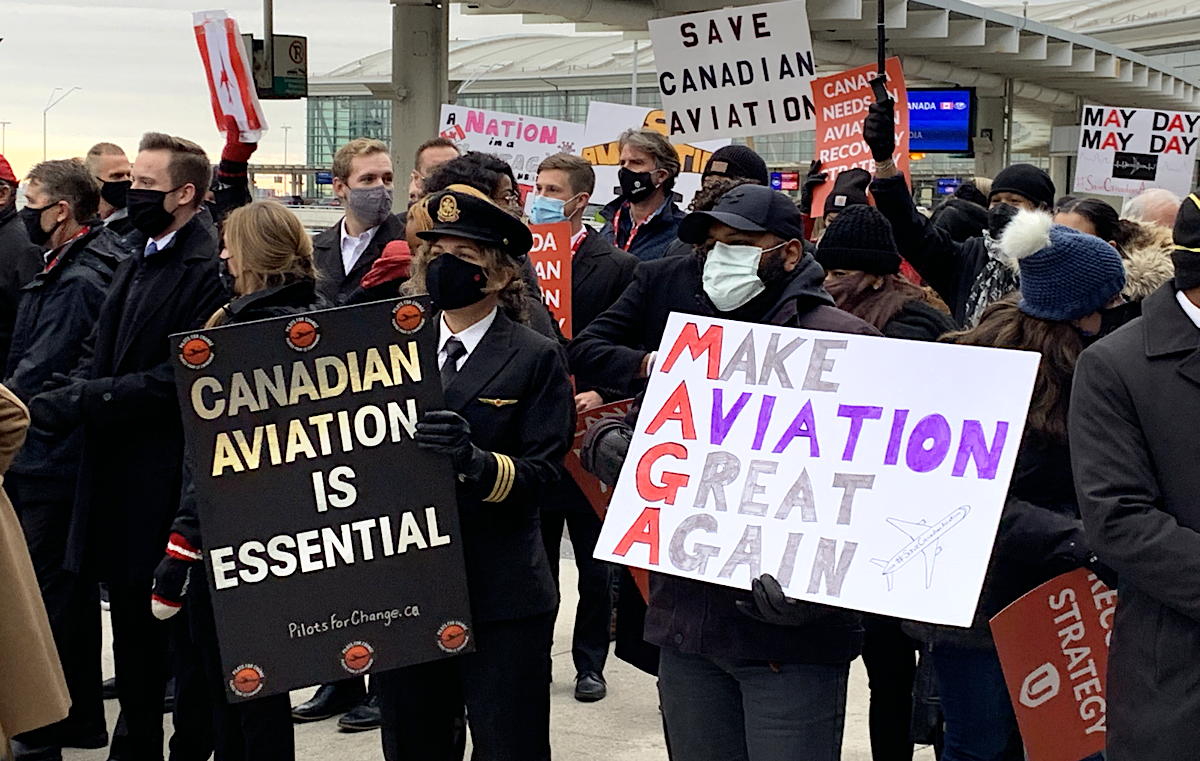 Standing on a stage addressing members of Unifor, the Air Line Pilots Association (ALPA), and the Canadian Union of Public Employees (CUPE), Armann outlined three things that workers are asking the Government of Canada.

These items being: rapid testing at airports (“So Canadians can travel safely and so we can get back in the sky,” said Armann); assistance for workers that have been furloughed or laid off; and low-interest loans so employers can stay in the sky.

“We’ve had enough,” Armann told attendees on Friday as attendees cheered in solidarity.

“It wasn’t long ago that Canadians were stranded in dangerous hot spots globally, and who was there for them? You were there for them,” a passionate Dias told the crowd. 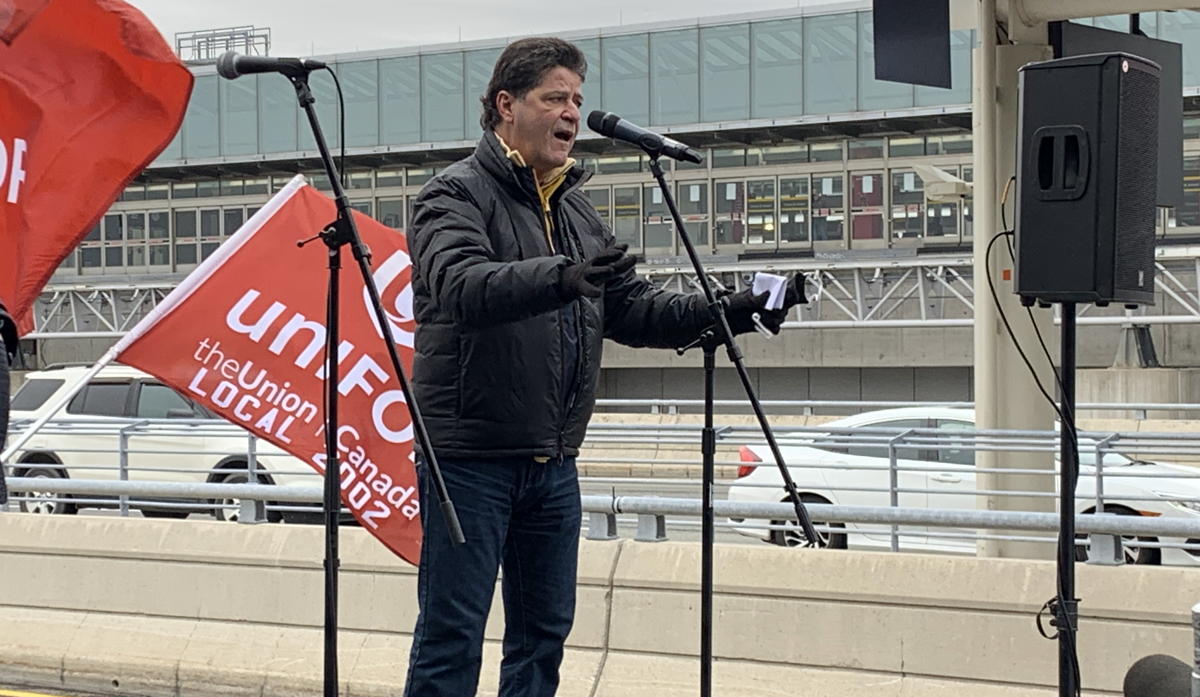 Dias went on to question why other countries, such as the United States, have received billions in dollars of government support while “Canada gets nothing.”

“It’s no longer time for words. It’s time for action. That’s what today is all about,” he said.

"The time to act is now”

The "March to Save Canadian Aviation" at YYZ was held in conjunction with a similar event held in front of the Montreal offices of Canada's Transport Minister Marc Garneau that same morning. 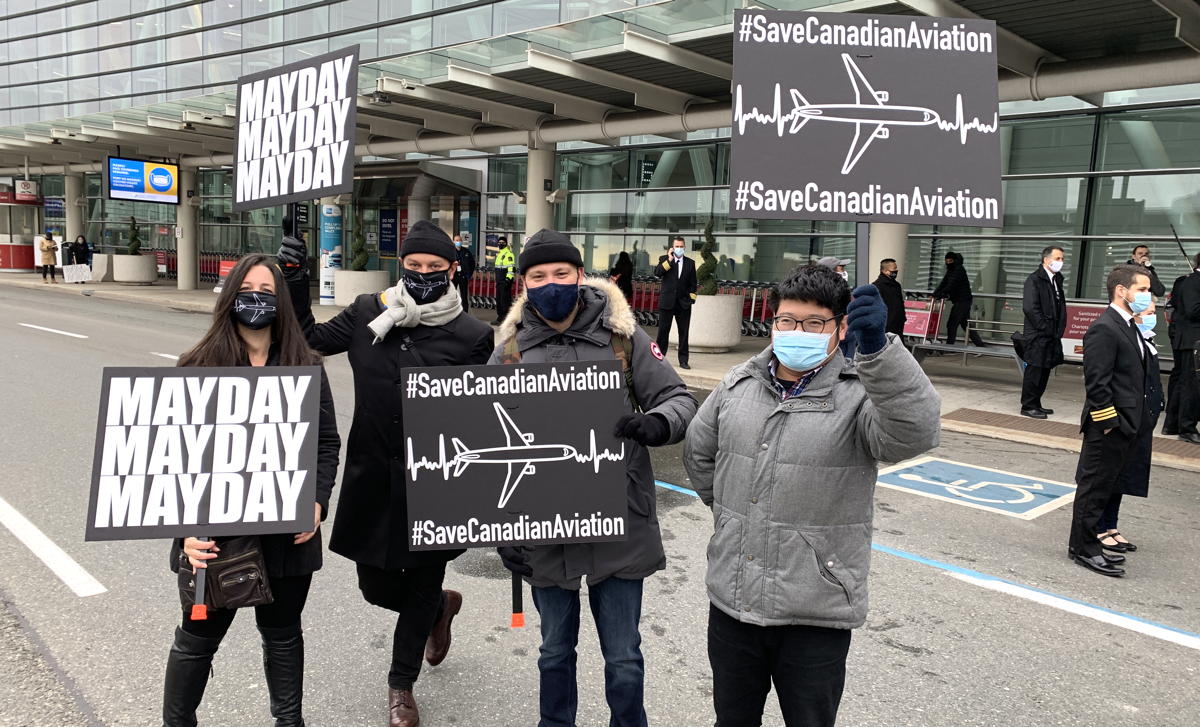 The events marked a second round of protests to save Canadian aviation amid the pandemic after nearly 250 aviation workers marched on Parliament Hill in Ottawa last week (Oct. 21).

Many of the workers who organized the Ottawa march, and the rallies at YYZ and YUL, belong to a Facebook group called “Aviation workers made redundant in Canada by the COVID-19 crisis,” a place where airline employees whose jobs were impacted by the pandemic “can make their existence and their issues known to the Federal and Provincial Governments of Canada."

The online group has more than 12,100 members (and counting). 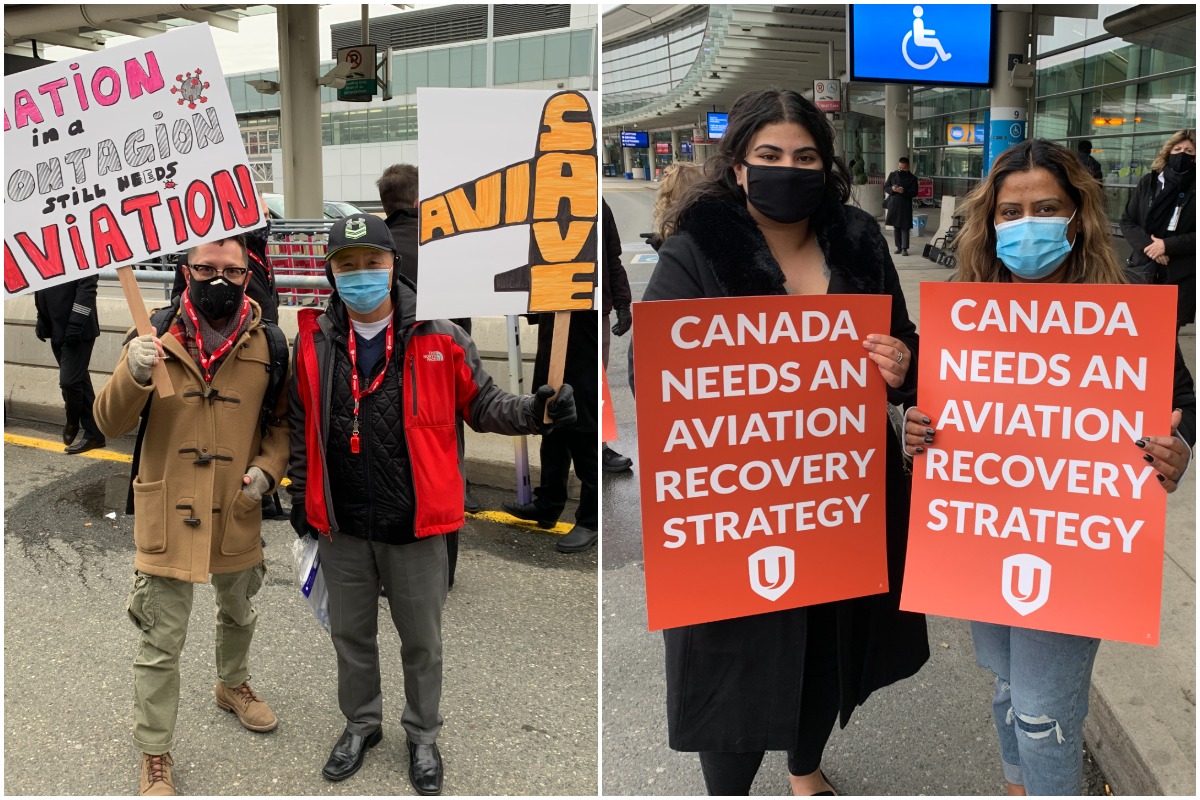 “The [rallies] are going really well,” Tim Perry, president of ALPA Canada, told PAX on Friday at YYZ. “It’s gaining traction from members, the public and the government. But our message is clear – the time to act is now.”

Perry explained that a successful recovery plan for aviation starts with sector-specific support, such as low-interest loans.

“We’re not asking for a handout,” Perry told PAX. “We’re asking for a hand up. Those loans will be used to make sure our industry is here when Canadians need it when they start flying again.” 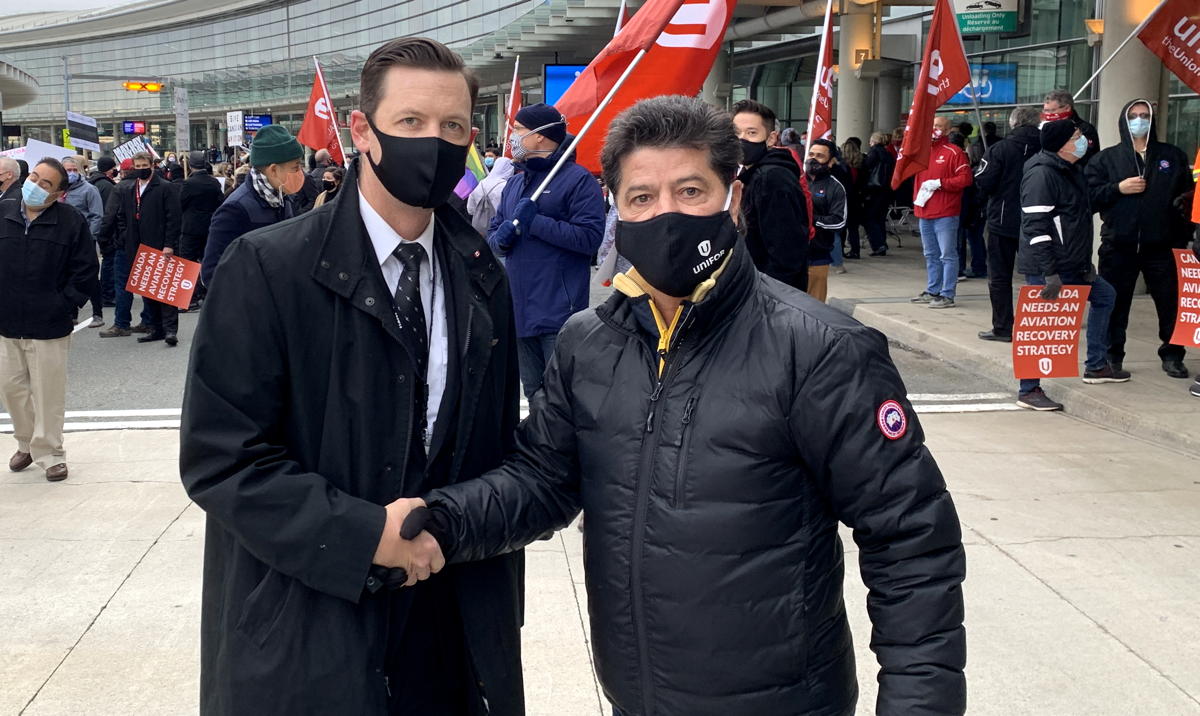 The event also drew attention to the fact that the Canada Emergency Wage Subsidy program, otherwise known as CEWS, was reduced last week from $847 to $573 (minus taxes) weekly, putting added strain on workers everywhere.

“I’ve got members calling me asking, “How am I going to feed my baby and keep my house?” said Armann.

“There’s no recovery in sight, no path forward.”

“Nobody wants a bailout"

Prime Minister Justin Trudeau and Canada’s Finance Minister Chrystia Freeland have publicly said that they are considering more aid to support Canadian aviation as COVID-19 continues to batter the industry.

While reports of an unconfirmed bailout packaged have surfaced, Trudeau and Freeland say they’ve helped the airline industry already, providing more than $1 billion of assistance through Canada’s wage subsidy program. 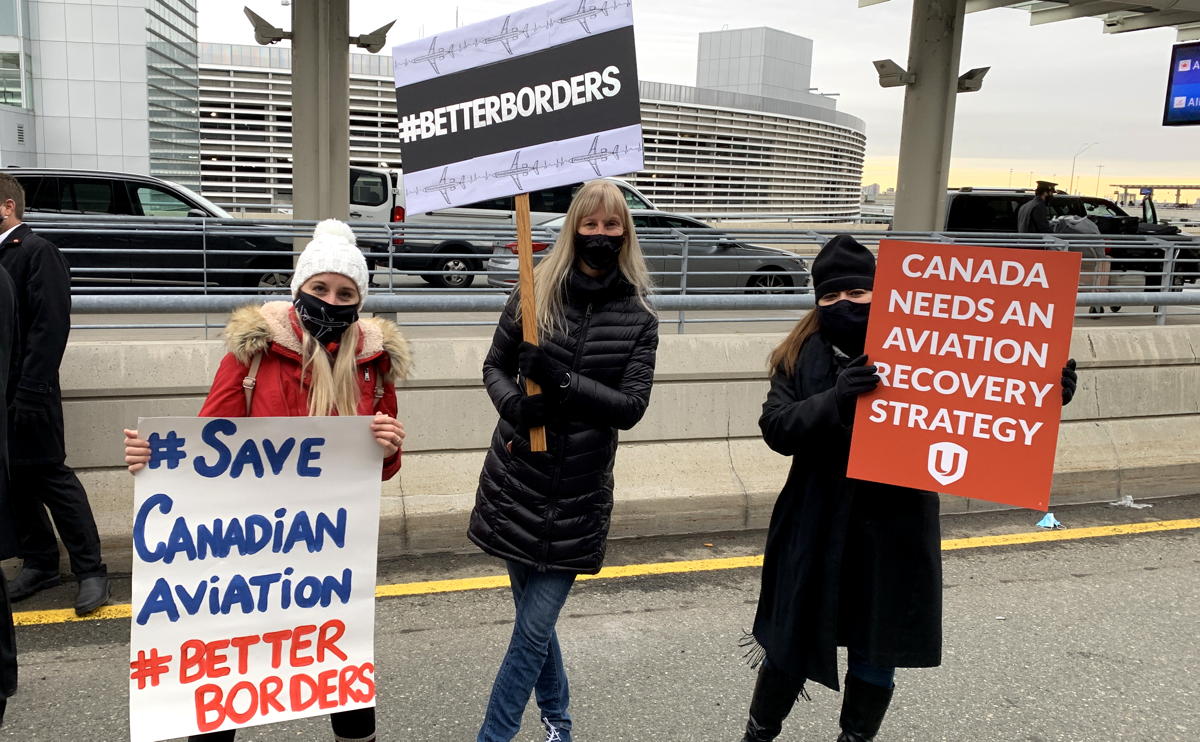 But these measures, though appreciated, aren’t enough to save aviation and support workers, advocates say.

Canada’s LEEFF loan program, for one, is expensive, starting with an interest rate of five per cent, then rising to eight per cent the following year.

The concern is that companies, airlines included, may not be able to stomach the debt.

“Nobody wants a bailout,” Armann told PAX. “We want low-interest loans so airlines can keep employees employed and paid a fair wage.”

Expressing his frustration, the Sunwing pilot pointed out on Friday how there’s pilots that haven’t flown in seven months and traffic controllers that can’t certify because there’s not enough traffic in the air.

He said the rallies will be ongoing, with future events already scheduled for next month – one at Vancouver International Airport on Nov. 13, in particular. (Click here for details)

“We won’t stop until the government delivers,” said Armann.

And all members of the travel industry, travel agents included, are invited to participate.

“We’re all connected,” added Perry. “The economic recovery depends on air travel and travel in general.” 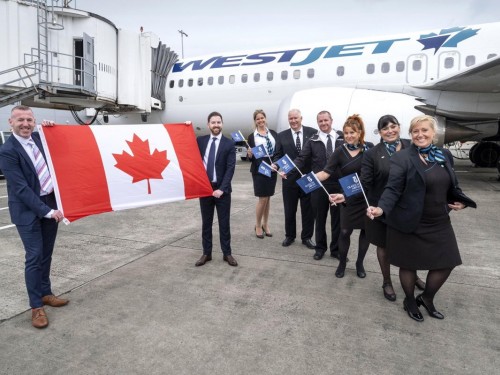