The French government is setting up a system that will enable non-EU tourists who have been fully vaccinated to obtain a COVID certificate that is valid in France.

The update, announced on Monday (Aug. 9), came on the same day that France unveiled a mandatory heath pass for entering everyday venues, such as restaurants, cafes,  hospitals and for travelling in buses, trains or planes.

The pass comes in the form of a QR code, which can be scanned by venues on its own or from one’s phone.

The measure is part of the French government’s plan to encourage more people to get vaccinated against COVID-19 and slow infection rates, as the Delta variant now accounts for most cases in France, the Associated Press reports.

Until now, visitors in France from outside of the EU, Schengen zone, England or Wales were exchanging their vaccine papers (at pharmacies, for instance) for a French COVID certificate, according to The Local France.

But now, tourists will be able to convert their vaccination certificates into a valid QR code by following new steps that are designed for non-EU visitors.

“Initially, this system is only open to non-EU tourists who are already in France or who will arrive on or before August 15th,” the French Ministry for Europe and Foreign Affairs stated in a press release on Monday.

It is unclear what the protocol will be for tourists who are arriving after that date.

"Requests concerning subsequent arrivals at will be processed at a later date," reads a statement on the Ministry's website. 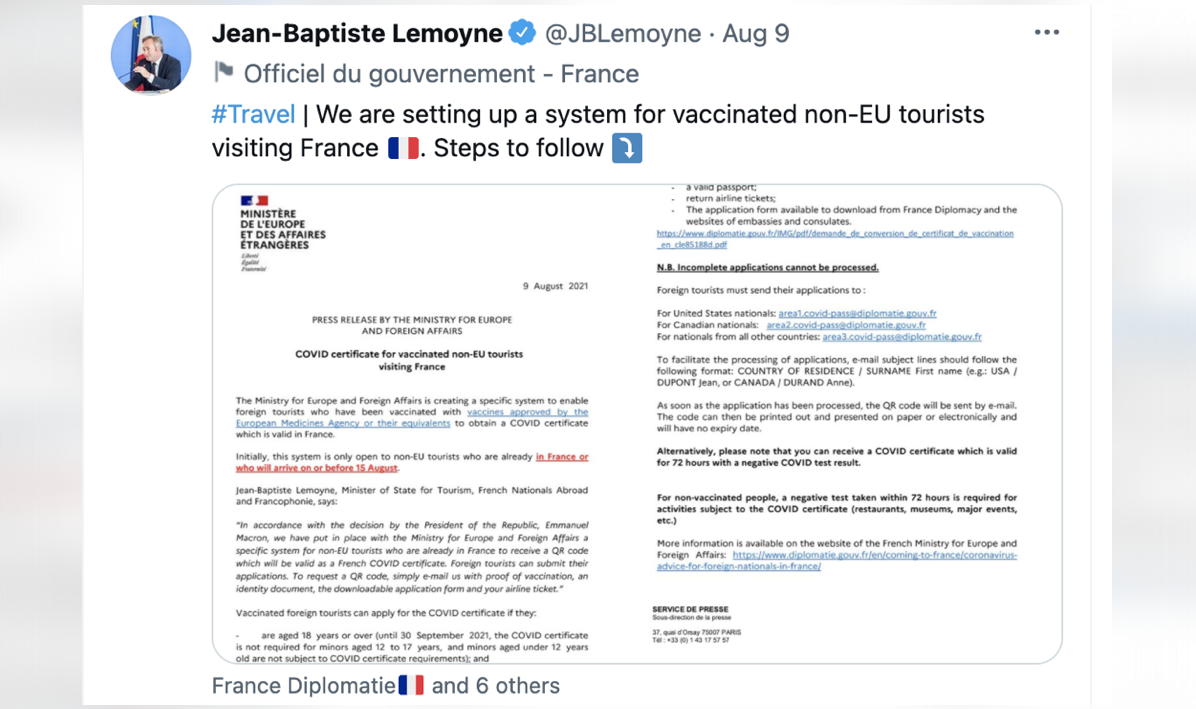 “Foreign tourists can submit their applications. To request a QR code, simply e-mail us with proof of vaccination, an identity document, the downloadable application form and your airline ticket,” said tourism minister Jean-Baptiste Lemoyne, in a statement.

In order to be eligible for France’s health pass, applicants must provide the following documents by e-mail in PDF, JPG, or PNG format:

Canadian nationals are being instructed to send their application to area2.covid-pass@diplomatie.gouv.fr

“As soon as the application has been processed, the QR code will be sent by e-mail,” the Ministry states. “The code can then be printed out and presented on paper or electronically and will have no expiry date.”

Non-vaccinated visitors, too, can also receive a QR code by submitting a negative COVID test; however, that pass will only be valid for 72 hours, the Ministry noted.

For the most up-to-date info on travel to France, visit the Foreign Ministry’s website.

France’s move towards using vaccine passports for use in everyday life mirrors similar actions currently being taken in Quebec.

Starting Sept. 1, a new policy will kick in that will bar unvaccinated people access to places such as restaurants and gyms.

Similar to France, Quebeckers will need to scan a code on a smartphone app to enter certain non-essential spaces and events, such as concerts and festivals, Quebec’s Health Minister Christian Dubé said on Tuesday (Aug. 10).

People visiting from other provinces and countries will also be required to use the system.

While the Government of Canada has unrolled a preliminary proof of vaccination system for travellers entering Canada, officials are still working on an internationally-recognized platform that will enable Canadians to prove their vaccination status while travelling abroad.

READ MORE: Still no date for vaccine passports, but system will be “simple & efficient,” Trudeau says

However, speaking to media on July 27, the PM said the new system will “simple and efficient.”

“The federal government will be involved in the international level of certification, so we have a role to play to make sure that the credentials that Canadians have are going to be able to be accepted around the world but there are lots of active conversations with the provinces on what exact form that will take,” Trudeau said.