Trudeau, "Can you hear me?" Airline workers turn to social media to #SaveCanadianAviation

Are you listening, Prime Minister Justin Trudeau?  How about you, Transport Minister Omar Alghabra?

Canadian aviation workers are lighting up social media in an effort to get the federal government’s attention as airlines, still without sector-specific aid, continue to face epic losses and soaring employee layoffs.

The campaign, supported by the hashtag #SaveCanadianAviation, shows aviation workers, from pilots to flight attendants to logistical pros, posing in their uniform and holding a sign addressed to the Prime Minister and Transport Minister that reads “Can you hear me?”

The initiative, which has been gaining steam online for several weeks now, was organized by a political action group comprised of members from a Facebook page called “Aviation workers made redundant in Canada by the COVID-19 crisis.” 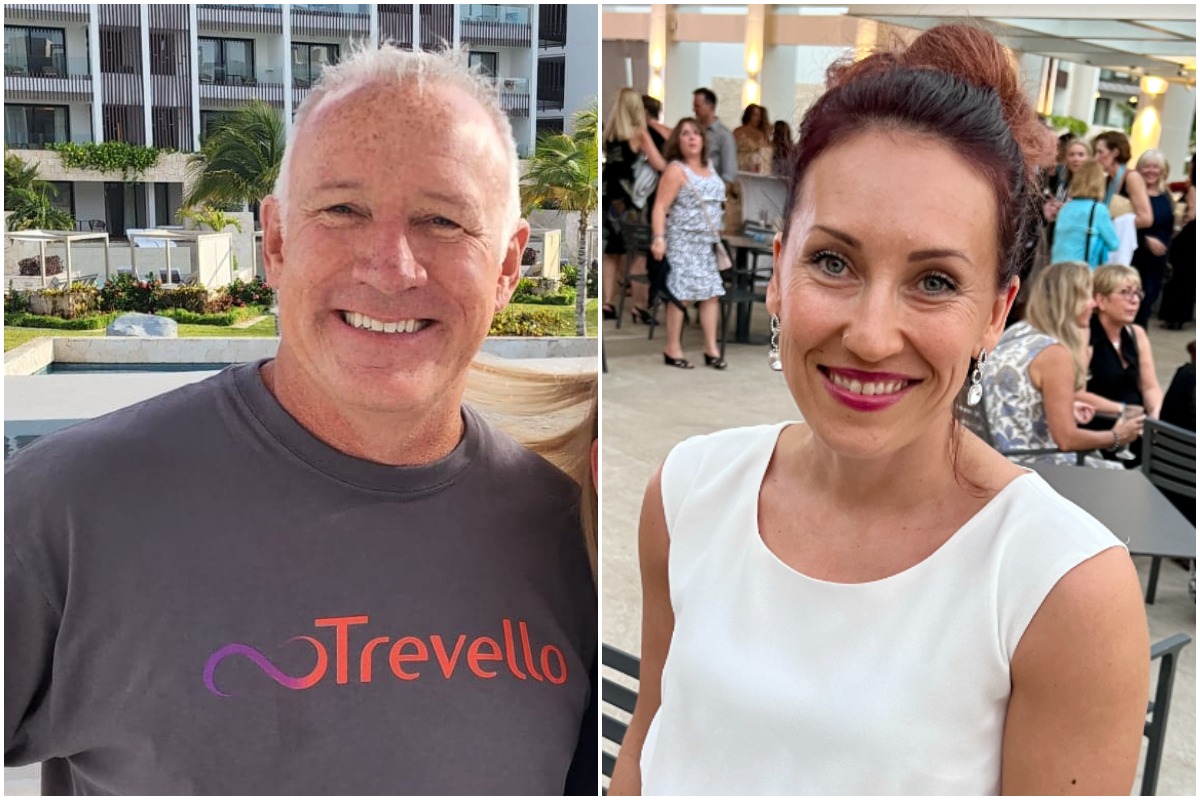 The page, which has more than 13,100 members, is a place where aviation workers affected by the COVID-19 crisis can “make their existence and their issues known” to Canada’s federal and provincial governments.

“Aviation workers and our industry have been ignored for the past 11 months,” the advocacy group told PAX in a joint statement over email. “The biggest worry is, will there be a Canadian industry to go back to after the pandemic? Many are wondering if they should start applying to foreign airlines in order to fly Canadians after the pandemic.”

“If nothing is done, we will not be ready to compete against foreign carriers who have received $200 billion in help as of today and more is coming.”

The social media campaign's message is driven by fair questions.

“Justin Trudeau, can you hear our concerns? Is anyone listening? After all the efforts made by airlines, manufactures, unions, worker protests, what does it take for this government to act?” the group said.

An industry in crisis

Canada’s aviation sector has remained in crisis from the very beginning of the COVID-19 pandemic.

Ottawa says financial aid for airlines is coming, but a deal has yet to materialize. If airlines want government-issued aid, they must first refund customers for cancelled travel during the pandemic, federal officials say.

Meanwhile, carriers continue to burn through millions in cash while cutting routes and reducing workforces as demand for air travel continues to drop to gut-wrenching levels.

Roughly 2,900 aviation jobs (and counting) have been eliminated in Canada this year alone, adding to the tens of thousands of positions that were slashed last year. 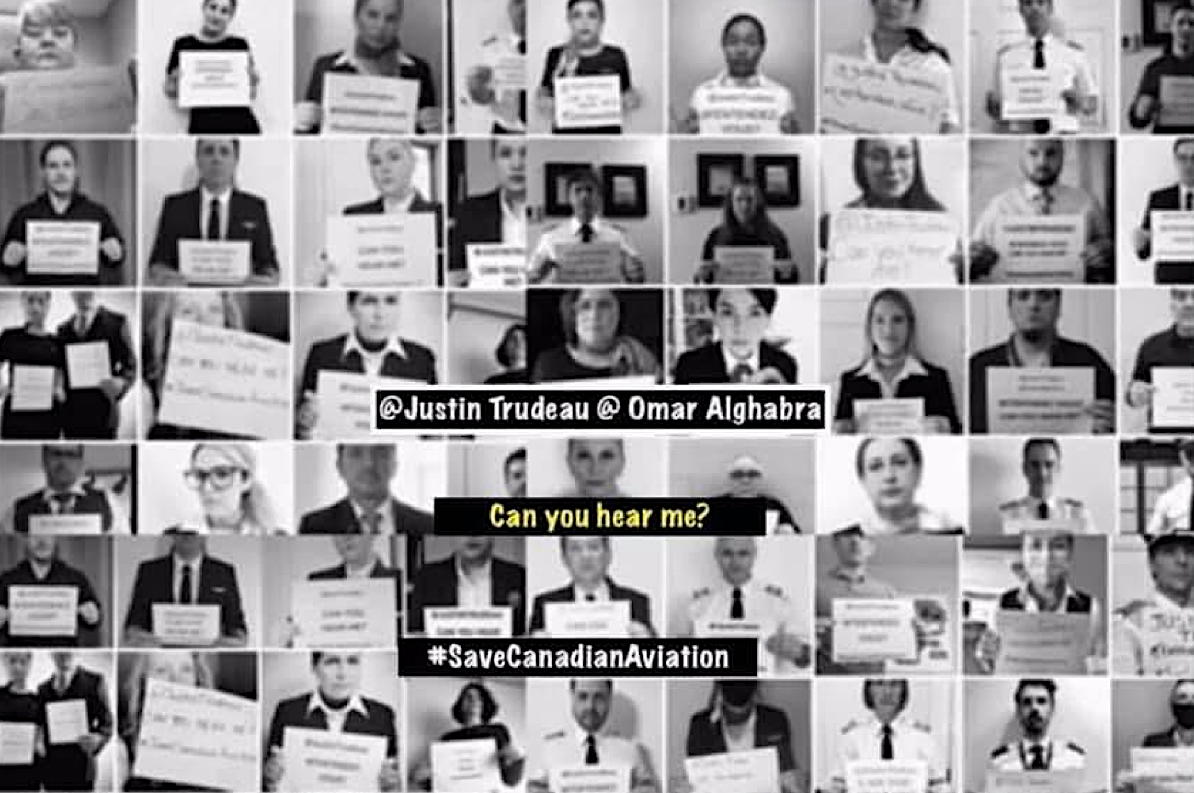 Last week, WestJet confirmed another round of cutbacks, laying out plans to cut some 120 cabin crew members by March.

Air Canada, on Tuesday (Feb. 9), slashed another 1,500 roles from its workforce and suspended an additional 17 international routes.

The latest reductions coincide with Canada’s agreement with Air Canada, WestJet, Sunwing and Transat to suspend all flights to Mexico and the Caribbean until April 30 – a decision that is forcing companies to downsize and preserve cash. 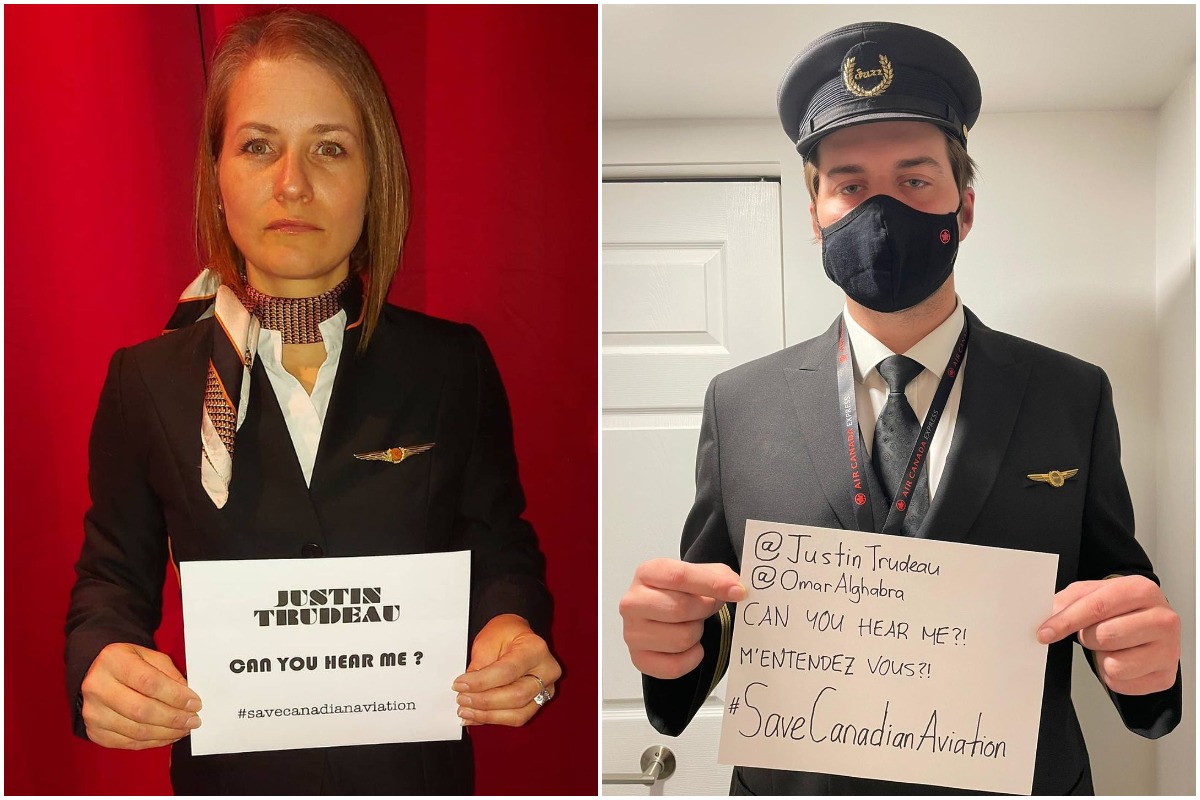 This is what led Air Canada, on Feb. 4, to announce a pause in its Rouge service, a move that will eliminate roughly 80 positions.

Canada’s tighter rules for international arrivals, such as pre-departure testing and an incoming mandatory hotel quarantine order, has also battered the industry, resulting in some 50,000 cancelled reservations in January alone.

The "Can you hear me?" campaign, however, puts a face to the workers who have been directly impacted by the government’s actions (and lack of action).

“Doing a campaign over social media seems like the right thing to do right now,” the group said, noting how current health restrictions limit their ability to mobilize in person.

“We just started taking pictures in uniform with a panel where it is written, @JustinTrudeau, can you hear me? #SaveCanadianAviation,” they said. “Immediately, the reaction from friends, families and contacts over social media were overwhelming.”

Participants are urged to tag Justin Trudeau and Omar Alghabra on social media, too, for good measure.

“It’s an opportunity to remind them that we are still waiting for them to take action,” the group said. 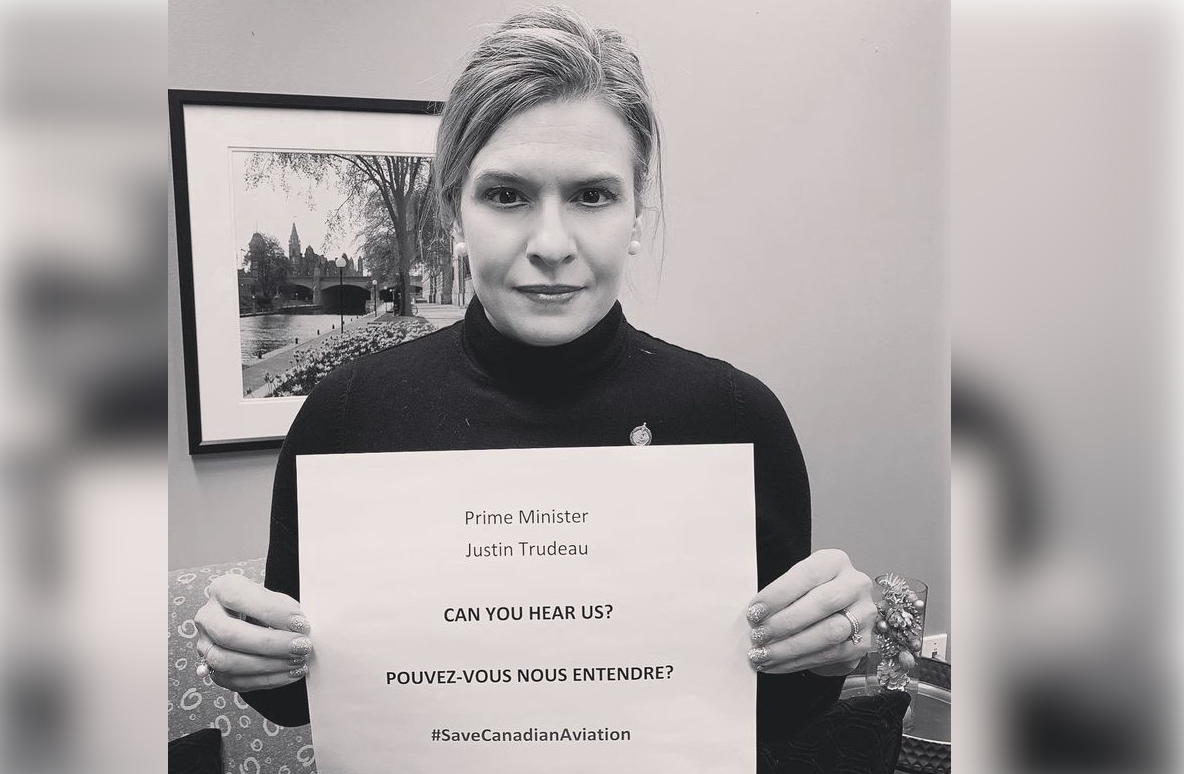 The advocates belong to the same group that led nation-wide demonstrations last fall that called on Ottawa to introduce measures to safely restart the travel industry and tourism in general.

The protests attracted hundreds of aviation professionals, and even some travel agents, in Vancouver, Toronto, Ottawa and Montreal. 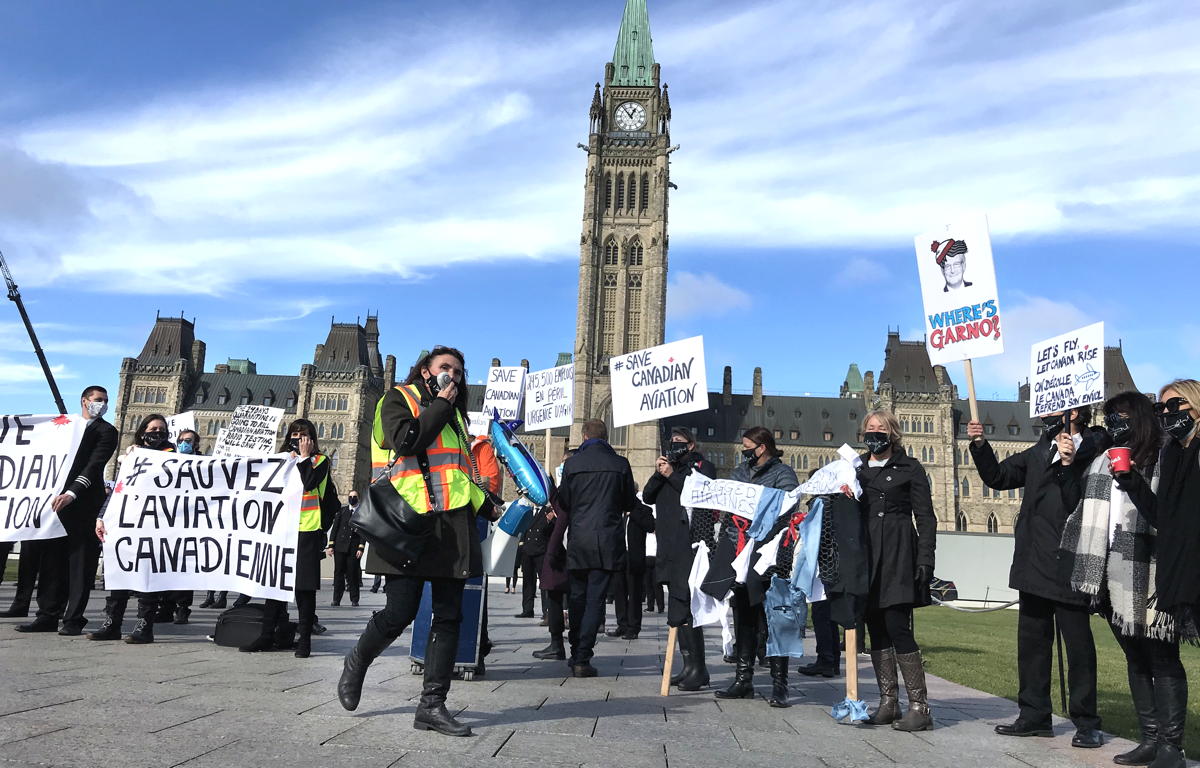 “We need our industry to get sectorial help,” the group told PAX. “Justin Trudeau keeps hammering $1.5 billion in CEWS as an answer every time he gets questioned by media and opposition parties.”

“This is so disrespectful toward all of us and not true.” 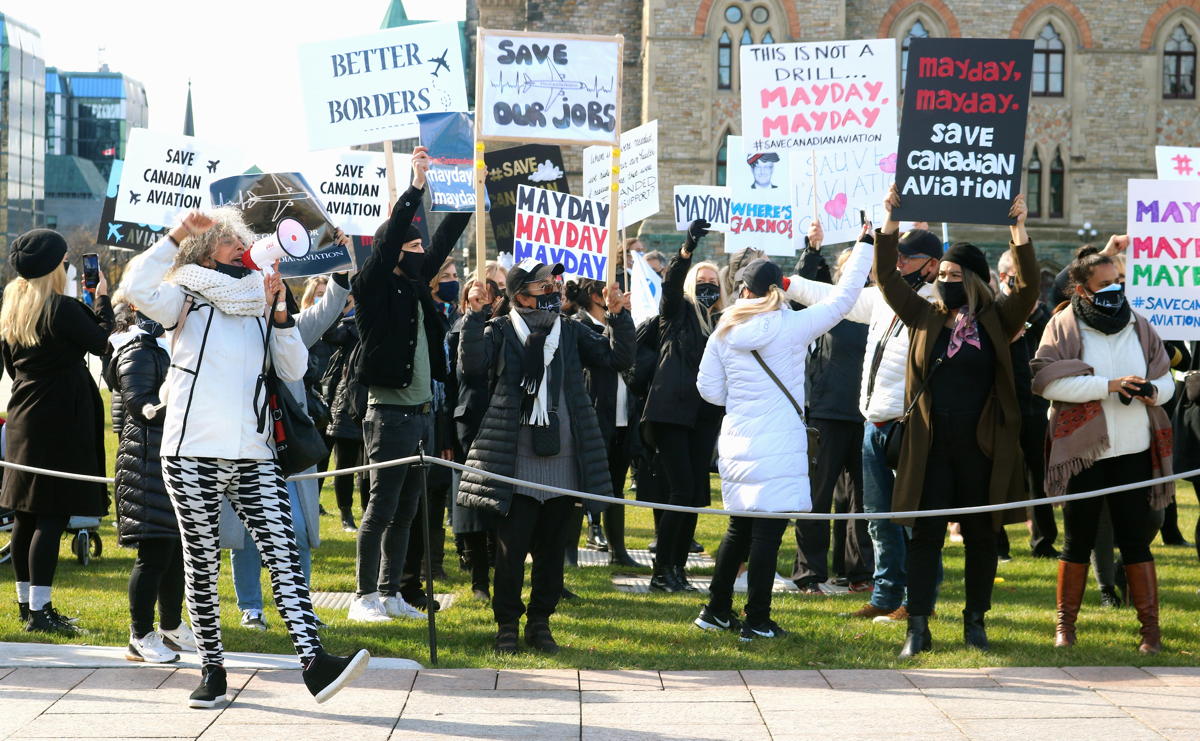 The group said “it’s as if the government was fuelling an airplane with leaking wings,” adding that the CEWS (Canada Emergency Wage Subsidy) is limited in terms of what it can do to help. 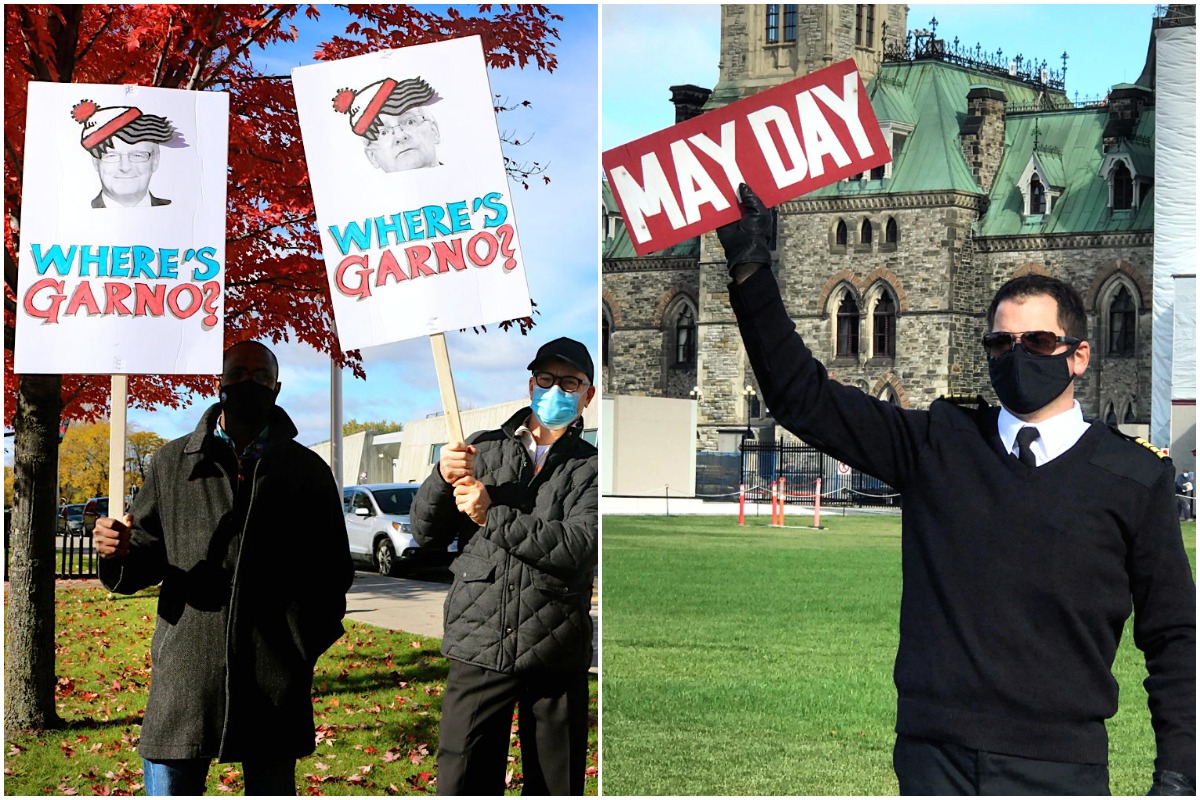 The "Can you hear me?" campaign has, so far, generated media coverage, online praise, and even shoutouts from Ottawa, including support from MP Stephanie Kusie, who contributed a picture of herself to the cause.

“We won’t stop until they take action to solve the situation completely,” the group said.

The advocates are encouraging every Canadian aviation worker – including those who work in the travel industry, such as travel agents – to participate and help build momentum.

“Don’t forget to tag Justin Trudeau and Omar Alghabra and use the #SaveCanadianAviation [hashtag] so your story can be known and shared all over social media for everyone to see,” the group said, as a reminder.