For the first time in its 16-year history, Porter reports that it is bringing its "distinguished approach to service, emphasizing style, care, and charm", to Western Canada.

Porter says its flights between Toronto Pearson and Vancouver give travellers the ability to fly across the country with an airline that prioritizes enjoyable economy air travel for every passenger.

Michael Deluce, president and CEO of Porter Airlines says the introduction of the E195-E2 provides the ability to operate throughout North America, including the west coast, better positioning the airline to serve the needs of many more business and leisure passengers.

"This investment introduces a new level of thoughtful service, unmatched by any other airline in North America. It will change the way passengers think about flying economy. A substantial amount of work has been accomplished to mark this milestone announcement, the first of many. I want to acknowledge the dedication and entrepreneurial spirit of our team members for getting us to this point. It’s quite an achievement," Deluce adds.

“As the demand for travel continues to increase, we are happy to have Porter Airlines join us to offer even more options for our passengers, “ Reigate shared.

“As the Canadian travel and tourism industry continues to recover, we look forward to Porter Airlines beginning service in the new year,” adds McNaney.

Mark Laroche, Ottawa International Airport Authority president and CEO shared that as Porter’s inaugural destination in 2006, YOW is thrilled to be part of their Embraer E195-E2 introduction.

“With construction of Porter’s YOW-based maintenance hangar well underway, plus the resulting air service growth, this carrier’s commitment to YOW is unprecedented. Not only does Porter’s next generation jets add to their flying refined experience, YOW’s future is bright with this aircraft being an integral part of it,” Laroche adds.

Stéphane Lapierre, vice president, airport operations and air services development, also expressed that “ADM Aéroports de Montréal is delighted to be supporting Porter in the expansion of its Canadian air service offering at YUL by adding a route to Toronto Pearson Airport. We are also very excited about welcoming the Embraer E195-E2 for the first time this February.”

Passengers can now choose to travel with Porter using two Toronto airports on these popular routes, with the start of Pearson service.

Porter says that Montreal and Ottawa will continue playing important roles in its network as new destinations are introduced in 2023.

Building on the distinct service it offers today in regional air travel, Porter is introducing a new economy experience with an even greater commitment to hospitality and sustainability, at highly competitive fares.

Porter shares that this new approach to economy air travel challenges what every North American airline does today.

Porter’s existing signature in-flight experience featuring complimentary beer and wine served in glassware, along with a selection of premium snacks, will continue to be part of the journey.

The introduction of the E195-E2 also brings passengers free, fast WiFi. On longer flights, Porter is adding the option of fresh meals made with real food and healthy ingredients.

A collection of six fares is available to support a broader product offering, including two new options specifically for the PorterReserve all-inclusive economy experience.

These fares are currently available for purchase, with the associated in-flight amenities starting Feb. 1. This includes routes served by E195-E2 and Dash 8-400 aircraft.

Porter will offer a 132-seat, all-economy, two-by-two configuration. Porter says it is the only airline with no middle seats on every flight, including its existing De Havilland Dash 8-400 fleet.

Porter’s order for up to 100 E195-E2s means additional routes will be announced regularly.

"Most environmentally sustainable aircraft fleets in the world"

According to Porter, the E195-E2 is the most environmentally-friendly single-aisle aircraft, at 65 per cent quieter and up to 25 per cent cleaner than previous-generation technology.

Porter also reports that it has the lowest fuel consumption per seat and per trip among 120- to 150-seat aircraft, and is the quietest single-aisle jet flying today.

Combined with its existing De Havilland Dash 8-400s, Porter says it will have one of the most environmentally sustainable aircraft fleets in the world.

Sustainability is also at the heart of the new menu design, with a priority on reducing and eventually eliminating single-use plastics onboard, providing biodegradable cups and cutlery, and eco-friendly packaging.

Catering partners also feature high-quality Canadian brands that will be announced prior to the introduction of E195-E2 flights. 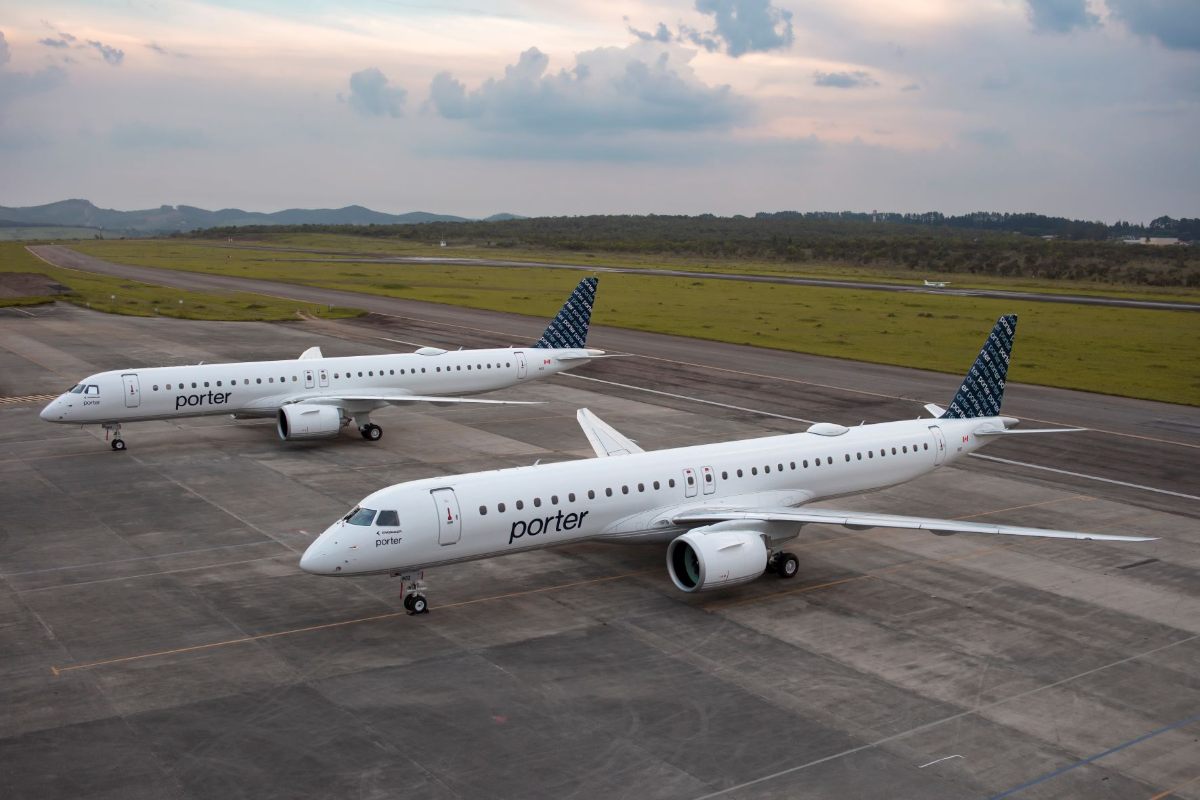