CEO Deborah Flint addressed media on Friday (Aug. 5) to share an update on YYZ, which, for several months now, has faced global criticism for its failure to keep up with the spike in demand for air travel.

On top of pain points brought on by the staffing shortages that came from more than two years of COVID-related layoffs and shutdowns is a PR crisis for Canada’s largest airport.

Last month, Pearson airport claimed top spots for flight delays in the world, multiple times, according to flight tracking company FlightAware. On some days, Pearson saw more than half of its flight departures delayed.

Toronto Pearson, of course, isn’t alone in this struggle as other major airports – in Europe, for example – have reported similar challenges related to long lines, delayed/cancelled flights and misplaced baggage.

"The aviation system worldwide is facing a perfect storm as it strives to improve operations in the aftermath of COVID-19. But the industry is rebounding, and the metrics we are sharing today show how working with our partners is yielding results,” Flint said Friday.

The GTAA says its goal is to “smooth the journey through Pearson so that passengers can reach their destinations with a minimum of disruption.”

While acknowledging the difficulties faced this summer, Ms. Flint said the GTAA is currently focused on two things: passenger experience and digital tools.

The GTAA says it has collaborated with airlines, government and other partners on technological advancements, hiring and passenger education.

The GTAA and the CBSA recently added 10 new eGates and 30 more primary inspection kiosks at Pearson over the last week of July. 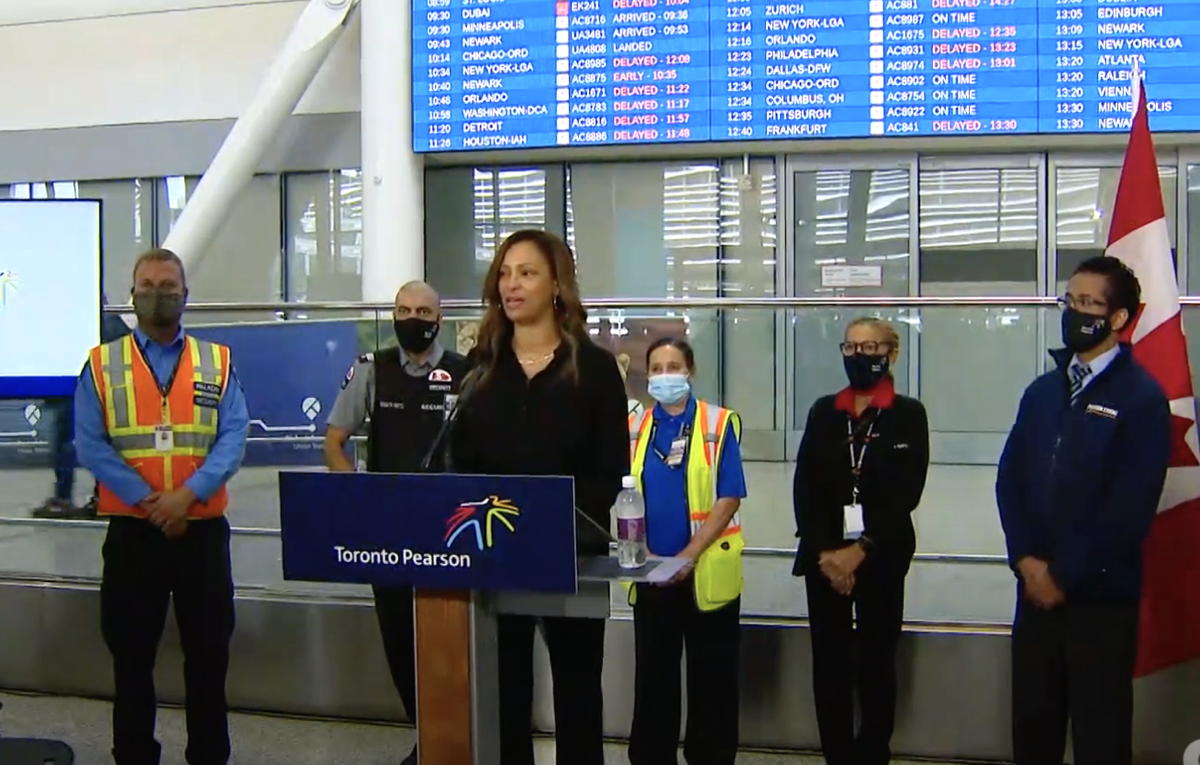 There’s also been an effort from airlines to make voluntary schedule reductions.

As a result, Toronto Pearson is now seeing improvements across several performance metrics, which it expects to continue or accelerate into the fall.

The most recent data from the Canadian Air Transport Security Authority (CATSA) indicates that 82 per cent of passengers last week cleared security in less than 15 minutes.

This is a one percentage point increase over the rolling average for the previous four weeks, the GTAA says.

Last week, across the airport, 44 per cent of all flights were on time, versus a 35 per cent average for the four previous weeks, the authority says.

At times, Pearson airport is forced to hold passengers on their plane to make room in the customs hall.

“This happened 19 times last week, an improvement from a four-week rolling average of 60 plane holds per week,” the GTAA said.

Baggage delivery is managed by the airlines, but Toronto Pearson has made it an ongoing focus for collaborative improvement.

For domestic travel, the average wait time for bags to arrive at the carousel is now 24 minutes, a three-minute improvement over the four-week average, the GTAA says.

The same metric also improved by three minutes for international bags, and by four minutes for transborder bags.

The GTAA says it will provide more tools to give insight into what to expect, including interactive infographics, a peak times dashboard with info on how busy each terminal and an at-a-glance resource that will be updated weekly.

Ms. Flint will also now host regular press conferences at Pearson where she and her team will provide a status update on operational progress and take questions from media.

“The progress made in recent weeks shows that this summer has been a transitionary period made particularly challenging by the length of time the Canadian aviation sector was shut down,” the GTAA said Friday.

“The GTAA is committed to making systematic changes to the way passengers move through the airport and across borders by studying global best practices and working with industry partners and the federal government to champion further changes so that Toronto Pearson continues to be a global leader in connecting people and businesses.”