How bad is Canada’s air travel situation? It depends on who you ask.

In its now-regular update on efforts to reduce wait times and delays for air travellers, the Canadian government on Friday (July 22) noted that progress is being made on improving the experience at airports.

According to the government’s latest data, from July 11-17, 2022, 81 per cent of passengers in Canada were screened by the Canadian Air Transport Security Authority (CATSA) within fifteen minutes.

Toronto Pearson International Airport's wait times increased for the week of July 11-17 with 78 per cent of passengers screened within 15 minutes but showed “slight signs” of improvement from July 18-21 at 82 per cent, officials said.

Vancouver International Airport, meanwhile, showed a slight increase for July 11-17, with 78 per cent of passengers screened within 15 minutes with signs of improvement from July 18-21 at 81 percent.

Montreal-Trudeau International Airport showed improvement for the week of July 11-17, with 78 per cent of passengers screened within 15 minutes, but this declined for the July 18-21 period to 68 per cent.

Whereas Calgary International Airport showed an increase in wait times with 78 per cent of passengers screened within 15 minutes for the week of July 11-17, with improvements last week at 81 per cent.

A small number of passengers – less than two percent across all airports – waited more than 45 minutes to be security screened for the week of July 11-17, 2022, the government said.

This is 17,526 higher than the previous week and represents about 76.4 per cent of the level for the same week in 2019, the government said. 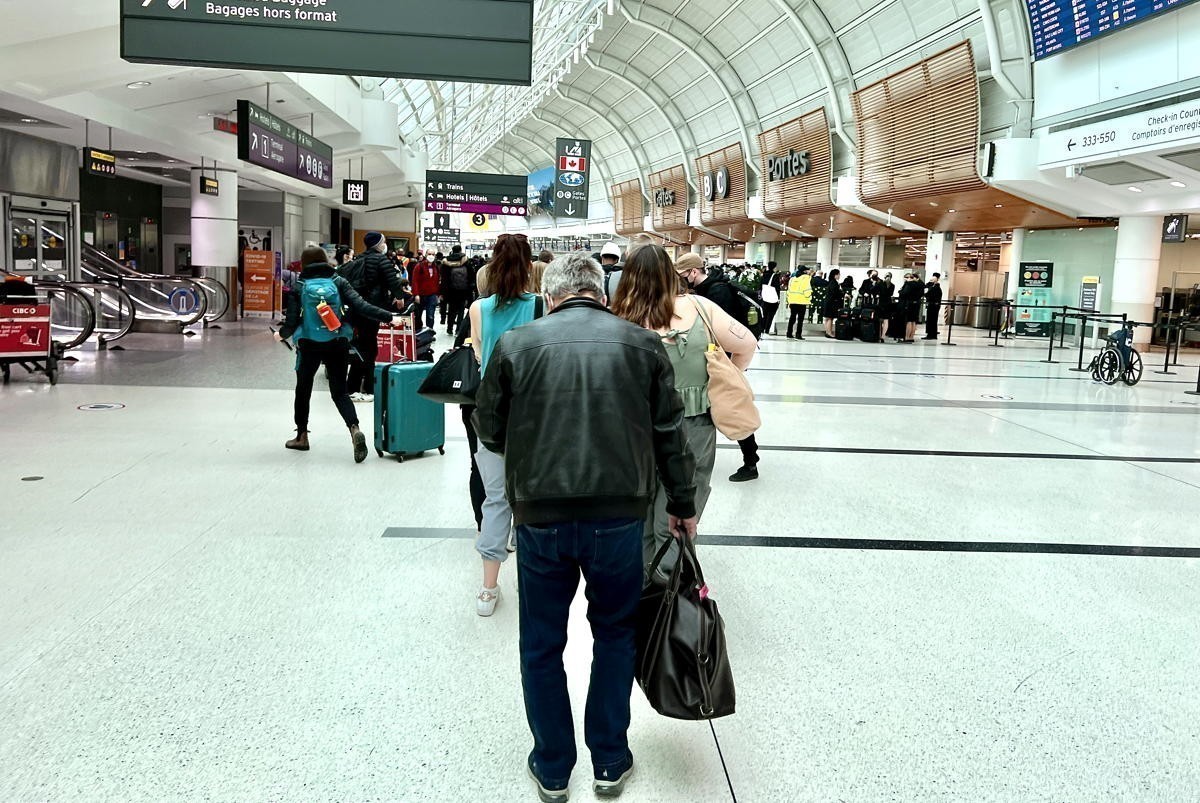 This is 7,410 higher than the previous week and represents about 82.7 per cent of the level for the same week in 2019, the government said.

One of the biggest hassles to emerge at Toronto Pearson during the pandemic is metering (the process of holding passengers on aircraft on arrival).

The number of aircraft being held on the tarmac at Toronto Pearson has “decreased significantly” since early May, federal officials said Friday.

This decrease shows the “significant progress” that has been made to date to address bottlenecks and to streamline passenger flows at Canada's largest airport, by adding more Canada Border Services Agency (CBSA) officers and more kiosks and eGates in the CBSA hall at Terminal 1, the government said.

That all sounds rosy, but other sources paint a different picture of Toronto Pearson airport, which has been under a microscope for several months due to incidents of long lineups, cancelled or delayed flights and misplaced luggage.

Despite optimistic news releases from the Canadian government, the overall situation at Toronto Pearson, beyond security lines, doesn’t seem to be improving after recently placing first for the worst international airport for flight delays in a recent ranking of major hubs.

According to data obtained by FlightAware on behalf of CNN, more than half of all scheduled flights from May 26 to July 19 — an eye-popping 52.5 per cent — were delayed at YYZ.

During this same period, 6.5 per cent of flights were simply cancelled.

“Pearson International has won top honours for airport service for years, but now is at the epicenter of a global air-travel meltdown,” as the Wall Street Journal put it bluntly on Sunday (July 24).

As for the first ranking airport for cancelled flights, the top spot went to China's Shenzhen Bao'an International Airport with almost eight per cent of all flights scrapped.

Of course, the pain points at Toronto Pearson – which have been blamed on everything from staffing issues to a higher-than-expected pent-up demand for travel – are also being felt at other airports around the world.

Seven of the world's top 10 airports for delays this summer are in Europe, FlightAware reports, with airports in Frankfurt, Paris, Amsterdam and London seeing the most delays.

In an extraordinary move, London’s Heathrow airport recently asked airlines to stop selling any more tickets for travel this summer after announcing a cap of 100,000 departing passengers a day.

This policy that was originally supposed to expire on Sept. 11, but is now expected to last until Oct. 29, according to reports.

Only one U.S airport made the top 10 on CNN global delays list: Orlando International Airport in Florida.

If it’s not one thing, it’s another.

At least WestJet customers can breathe a sigh of relief this week knowing that their airline averted strike action after reaching a tentative agreement with the union that represents nearly 800 baggage service workers, customer service agents and guest service leads in Calgary and Vancouver.