Mask on, mask off.

Following a judge's Monday (April 18) ruling that struck down the U.S. Centers for Disease Control and Prevention's (CDC) masking rules for public transit, many U.S. airlines have made face coverings optional for both passengers and employees.

Delta, United and American and Alaska are among the U.S. airlines that are no longer requiring masks.

"Effective immediately, masks are optional for all airport employees, crew members and customers inside U.S. airports and onboard aircraft," Delta Air Lines noted in a statement.

Due to the nature of the federal ruling and an announcement from the Biden administration that the Transportation Security Agency (TSA) would no longer enforce a mask mandate meant that passengers could experience "inconsistent enforcement during the next 24 hours."

Delta reminded customers to “show understanding and patience with others who may not be aware enforcement is no longer required.”

United also issued a statement yesterday, announcing that masks are no longer required on domestic flights, select international flights (dependent upon the arrival country's requirements) or at U.S. airports.

The carrier did, however, suggest that face coverings are still OK, if passengers would like to continue wearing one.

“More comfortable keeping yours on? Go right ahead…the choice is yours (you look dino-mite either way)!” United wrote in a statement posted to its Twitter account, attaching a photo of a Brachiosaurus skeleton, wearing a face mask, on display at a U.S. airport. 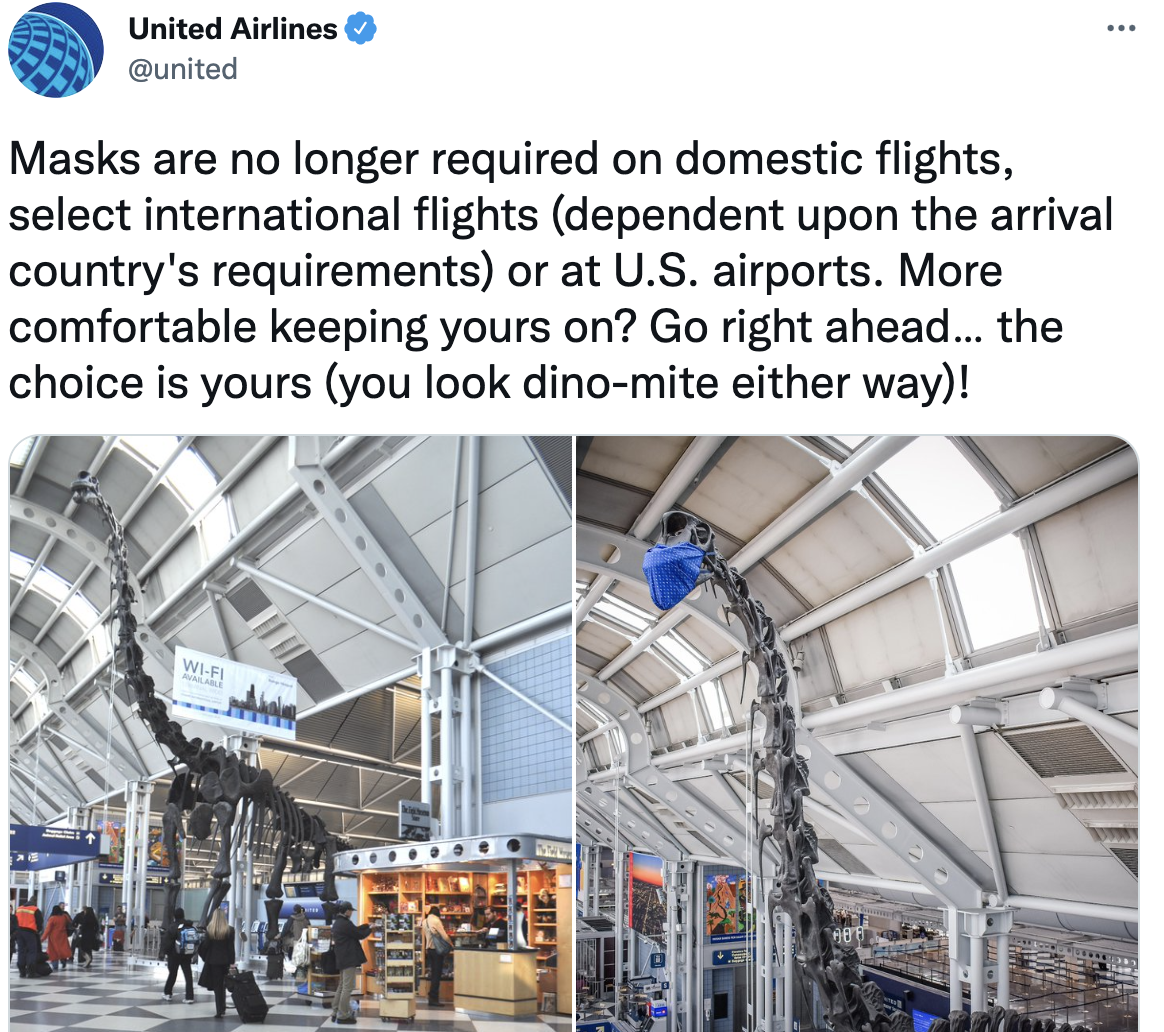 American Airlines echoed a similar policy, saying "face masks will no longer be required for our customers and team members at U.S. airports and on domestic flights."

Alaska Airlines, too, said masks would be optional in airports and on aircraft "effective immediately."

Alaska also touched on passengers who had been banned from travelling over their refusal to wear a mask on board, saying "we will have some guests whose behaviour was particularly egregious who will remain banned, even after the mask policy is rescinded."

JetBlue and Southwest have also chimed in, ending their face mask rules as well.

"Southwest employees and customers will be able to choose whether they would like to wear a mask, and we encourage individuals to make the best decision to support their personal wellbeing," Southwest said in a statement.

"The high level of immunity and widespread vaccine accessibility in the U.S. coupled with the hospital-grade cabin air on aircraft provide a strong, science-based foundation for passengers to travel with confidence as restrictions are lifted on our nation's airlines," the group was quoted as saying, as reported by Reuters.

"We look forward to welcoming millions of travellers back to the skies this summer to reunite with loved ones, attend conferences or to take a vacation."

Last week, the U.S. CDC extended America’s nationwide mask requirement for public transit by 15 days as it investigates a spike in COVID-19 cases.

The order applies to airplanes, buses, trains and transit hubs and its extension to May 3 was supposed to give the CDC more time to study the BA.2 omicron subvariant, which currently makes up more than 85 per cent of COVID cases in the United States.

But U.S. District Judge Kathryn Kimball Mizelle in Tampa, Florida on Monday voided the CDC's order, ruling that "the mask mandate exceeds the CDC's statutory authority and violates the procedures required for agency rulemaking under the APA." 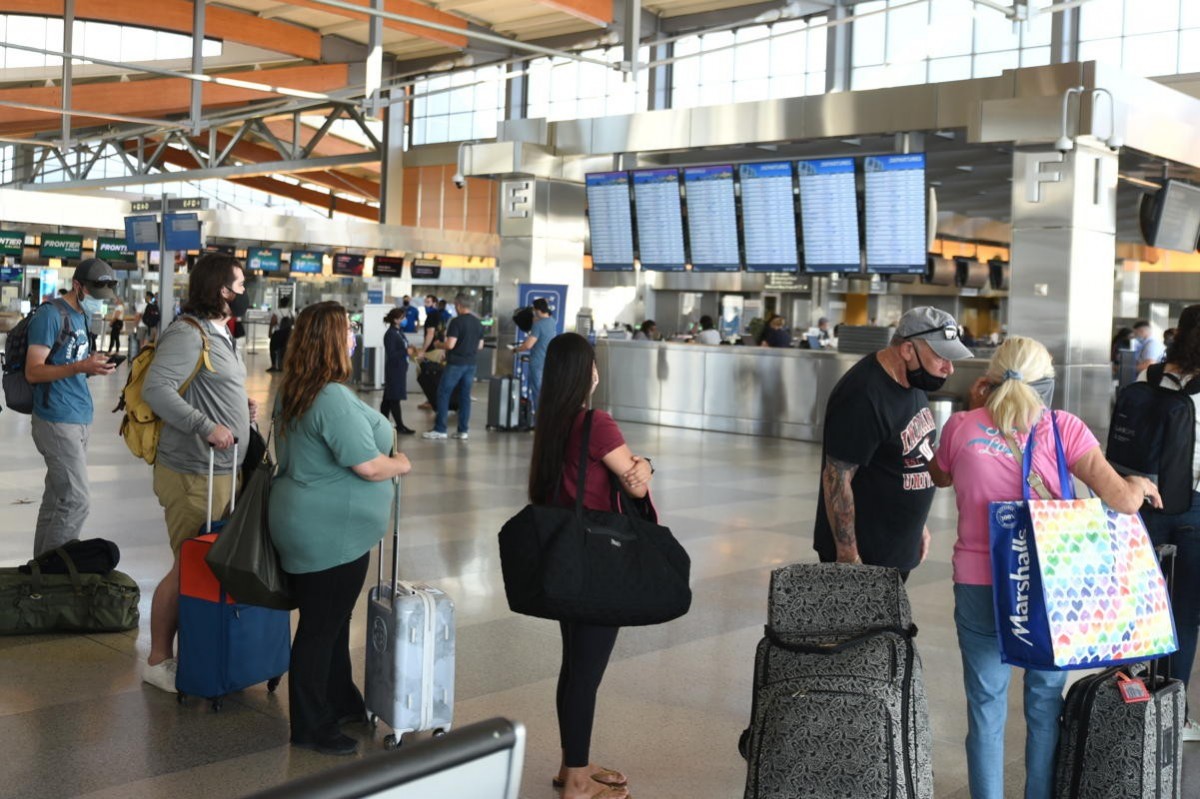 What this means is that the CDC's masking order is not in effect right now, and the TSA won't enforce the rules while federal agencies review the judge's decision, the administration official said.

The CDC, it should be noted, is still encouraging travellers to wear masks on public transit.

“It makes no sense”

America’s largest airlines had previously lobbied the White House to end mask mandates, arguing that the rule was causing abusive behaviour on board airplanes from irate passengers disputing the rule.

Last month, in a letter to the Biden administration, CEOs of all major U.S. airlines requested to end mandatory mask-wearing on planes.

"It makes no sense that people are still required to wear masks on airplanes, yet are allowed to congregate in crowded restaurants, schools and at sporting events without masks, despite none of these venues having the protective air filtration system that aircraft do," the letter reads.

The airline executives said the burden of enforcing face masks on planes has unfairly fallen on employees.

"This is not a function they are trained to perform and subjects them to daily challenges by frustrated customers. This in turn takes a toll on their own well-being,” the group wrote.

Air travel has, indeed, seen a spike in bad passenger behaviour during the pandemic.

This year alone, the Federal Aviation Administration received 1,150 reports of unruly passengers – 744 of which were related to wearing face masks.

The CDC’s position is that travel on airplanes, trains and buses presents a unique risk, including the possible introduction of new and dangerous variants from overseas.